Discovering, collecting, and appreciating art is a road to self-discovery. What you like. What you don't. The feelings you feel. The feelings you don't. Art makes your soul grow, as Vonnegut once said. It's why we've created the Huckberry Artist Series, a partnership with some of our favorite artists to share their stories and create one-of-a-kind, limited edition prints, posters, and tees.

"There are no analytics to track what the value of being comfortable in your silence will teach you."

You never really know in the moment. 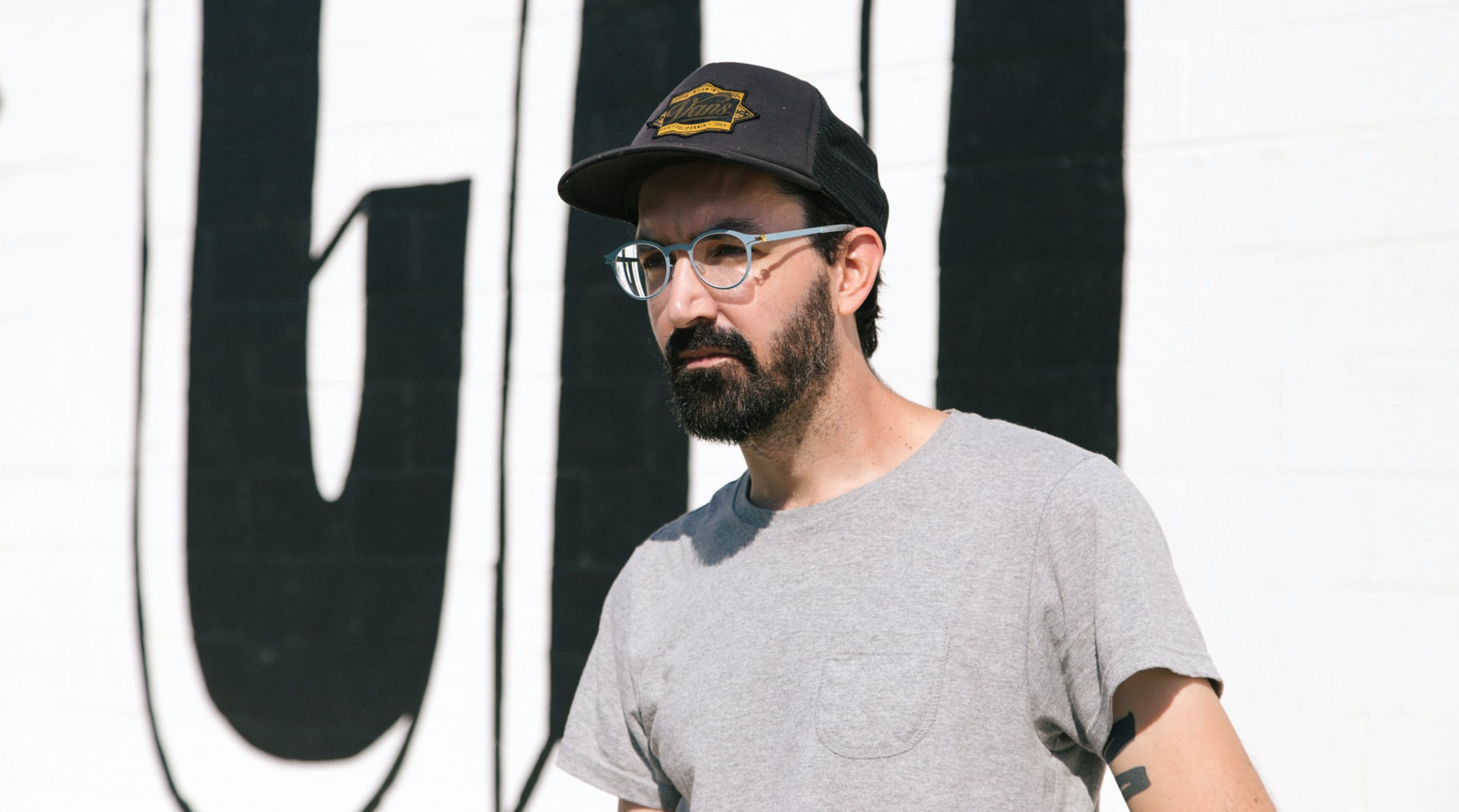 For our latest installment, we’ve tapped Kyle Steed, an artist, muralist, and photographer based in Texas. We paid a visit to Kyle’s studio in Dallas to catch up with him about creativity, family, and his past life in the Air Force. We also ended up killing his personal stash of LaCroix. Sorry, Kyle.
​
Kyle Steed lives in the Oak Cliff neighborhood of Dallas at the end of quiet street with his wife and two daughters. It was hot and humid on the day we visited this summer. The big pecan trees above their modest home provided some much-needed shade and the fluttering of cicadas provided a perfect laid-back afternoon soundtrack.

Though he’s probably best-known for the large-scale murals he’s painted around Dallas and elsewhere in the US, Kyle has also designed fonts, whipped up graphic design work for a bevy of clients, and maintains a popular Instagram account with glimpses into every corner of his life, including shots from his beloved Instax camera.

Kyle is quick with a laugh, easy to shoot the breeze with, and totally engaging. Shortly after meeting, we were getting real and talking about family, the difficulties of moving abroad— he was stationed in Japan during a stint in the Air Force —and the deep need we all feel to be creative. Conversations with Kyle flow naturally from light topics to heavy pretty quickly. Maybe it's the southern hospitality, or maybe it's just Kyle himself, but after spending a few days together putting this feature together, it felt like we were old friends. The interview below is a condensed version of our long conversation.

...ON GOING INTO THE AIR FORCE AND LIFE IN THE MILITARY

I don’t go around touting it. I don’t mind sharing it because it’s part of my story, but I also don’t hold onto it like it’s part of my identity. It formed me and shaped me to what I’m doing now, but everything is doing that.I spent six months learning morse code and learning signals stuff. I couldn’t tell you any Morse code now. It was there for a minute, and it’s gone. There was still some creativity happening because that’s just part of me. If I’d been deployed and captured and imprisoned somewhere, I probably would have found some way to create. That’s very drastic, but I think I was bored more than anything and I hate being bored, so I found time to fill that time of boredom with sketching, or writing, or drawing on posting notes, almost as an escape.

It’s a medium that gives back. That’s why I love doing the murals. It’s giving the community at large— the public —something back, that engages them in a way that an image on the internet never could.

I still get into old routines like coming into the studio and opening my laptop. You’ve got to just to turn everything else off. Turn the noise off. It helps you kind of learn to sit in your silence for a bit and that’s a hard practice, but it’s one that’s truly important. You can’t measure the value of it. There are no analytics to track what the value of being comfortable in your silence will teach you.

The daily practice of making something is so important. A lot of these rough line sketches — some of them I don’t even like. Some of them I won’t even fully realize for maybe another couple years, what they really mean, but it’s all part of the evolution of artwork. If it’s not clicking now, something will click later, and I will have had all this experience. And maybe it’s just getting better control of my brush — you never really know in the moment, but to me, that’s just such a healthy party of being a creative person. And if you’re not doing that you get stagnant.

Part of the risk of being an artist is being willing to make mistakes, being willing to make bad work. When you start to hear your own voice you kind of feel that out. To me it’s not as important if it’s good or bad work, it’s just important that you’re creating. In your 20’s, you spend that whole decade trying to figure out who you are. Part of my military experience was self-discovery, figuring out who I was and what I wanted to do and asking myself, “why the hell am I doing this?” Every day I asked myself those kinds of questions.

My studio sits in what used to be our spare guest room, with a large front-window facing toward the street. Our house sits on the end of a cul-de-sac and we get a fantastic full 360º view of our little street. On a sunny day, when I can sit in the studio and catch glimpses of my wife and daughter playing in the front yard, there’s just a slight tug on my heart to forgo the rest of the work day and join them in the fun. But I love this tiny space we’ve been able to carve out here at home for my studio where I can be so accessible to my family, as well as clients.

If you’re always consuming something, it doesn’t give you a chance to produce something. I think that’s so much of our culture is consumer culture and that’s easy. We want things easy. When we’re making, sometimes we have to confront things that aren’t understandable in the moment. To me, that’s why I love making art. I don’t have to know what it means.

...BECOMING ONE WITH THE WORK

There’s no other way to do it, you have to become a part of your work. It’s this whole weird experiment of your subconscious and if you’re tuned into that and you allow yourself to do that, then something that is uniquely you will show up in the finished product.

It’s tough to put a label on it, but I really like the word “primitive” when I’ve thought about my work lately. I like that there’s this nod to the past, way back in the past. Cave drawings. People communicated with pictures long before they communicated with written words and language. Images contained their own language.