If the late John Berger taught us anything, it's that the best definition of art is "a way of seeing." That's why we created the Huckberry Artist Series — a partnership with some of our favorite creatives, a peek into their process, and a chance to see the world through their eyes. And to bring just a little more of their world into yours, we teamed up to create a limited run of prints and merch. Our latest edition peels back the label on Huckberry's new collaboration with Mikkeller Brewing on The Blue Hour Gose — a crushable, refreshing beer perfect after an evening adventure. Let's dig in.

"I was only hired to make one label — no promises of more work after that. So my goal was to make something fun and something that felt natural to me." 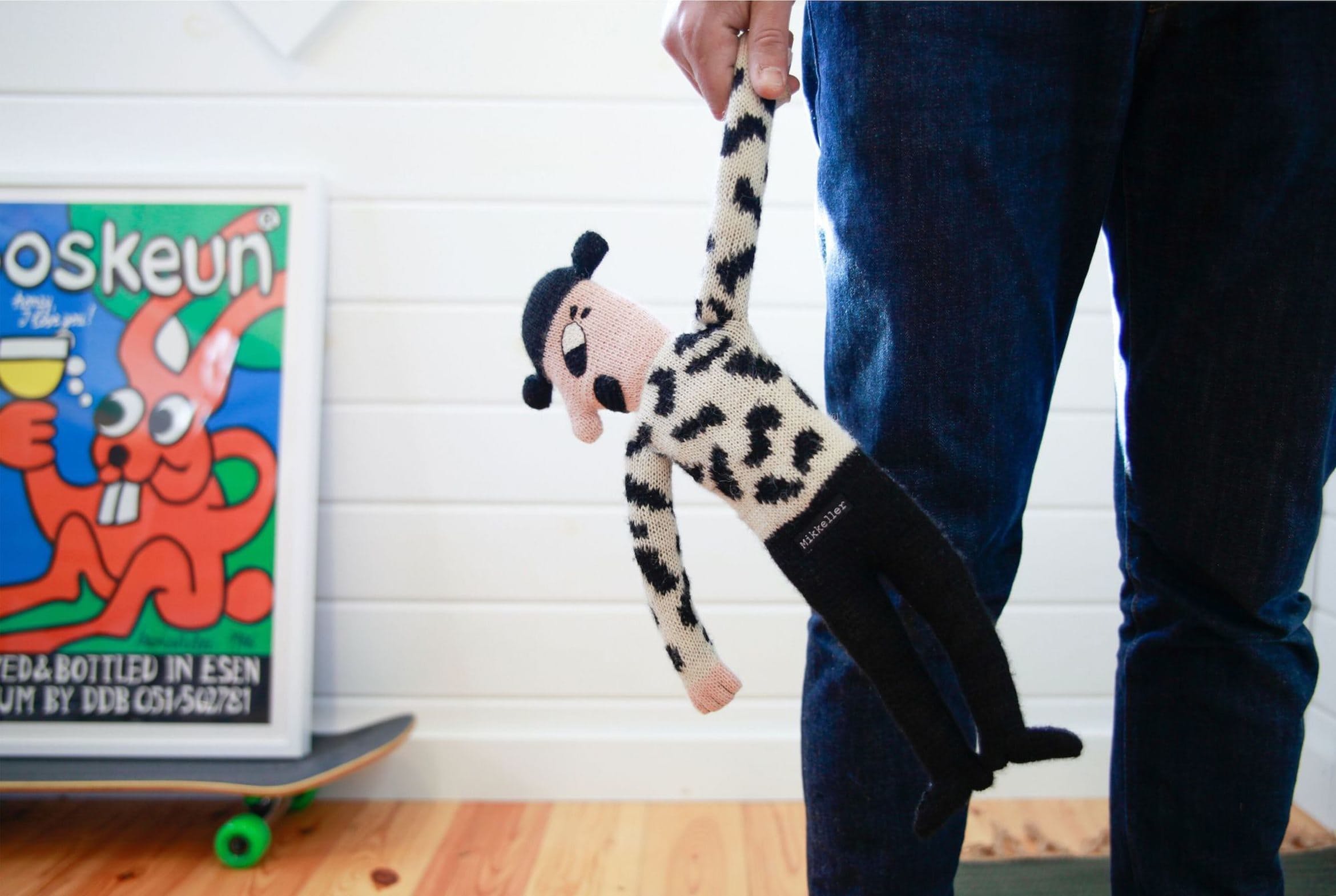 At Huckberry we’ve got a soft spot for iconoclasts. The people that zig when others zag. The ones that throw curveballs in the face of the status quo and, in turn, lead us somewhere unexpected and new. From a small shed on the outskirts of Philadelphia, Keith Shore’s doing just that — churning out a dizzying number of illustrations for the cult-favorite Mikkeller brewery that playfully abandon any notion of what a beer label should look like. His designs for Mikkeller are no small part of the Danish beer maker’s meteoric rise in the craft beer scene. With their retina-tingling colors and flatly bold style, Keith’s labels spark curiosity and word-of-mouth time after time. For Keith, there was never some grand master plan to turn the beer scene on its head. He simply trusted his gut and created the kind of thing he’d want to see in a bottle shop. Ahead of our collaboration with Mikkeller on a beer of our own, we tapped Keith for a rapid-fire chat to learn more about his process, his favorite spots on the Jersey shore, and what he’s got in the pipeline.

Full disclosure: former Philadelphian here. I'd always found Philly to be really hospitable to artists and people in creative fields. What do you love about the city?
I'm born and raised in the Philadelphia area. We currently live in the 'burbs about 30 min north of the city proper. After college in Boston, I moved back to Philly and had a studio at Space 1026 for a bit. That was my only real connection to the art scene here but I have stayed friendly with some of those people — we all still make art and support each other. I occasionally have beer-related art events in the city and that crowd has been awesome and very responsive to my work with Mikkeller.

How'd the introduction to Mikkeller come about?
I had been working as a freelance illustrator for about 10 years before my first job with them. I've worked on editorial stuff, skateboards, clothing, book covers, packaging design. I was getting into beer a bit and my local shop had one lonely Mikkeller pilsner on the shelf and the crude drawing of Mikkel on it caught my eye. The beer scene was nothing like it is now and it had never occurred to me before that label design & illustration for the beer world was something to consider exploring. The Mikkeller label I found had their website listed and way back then those emails went directly to Mikkel Borg Bjergsø himself. We exchanged some emails, I shared my art, and then we met in person during an event he did in West Philly. The first label I worked on with them was a collab with Brew Dog called ‘I Hardcore You.’ This one definitely introduced the vibe that would later become Henry & Sally [Keith's recurring character designs].

How did Henry and Sally take shape?
Before they showed up on Mikkeller labels they existed in my sketchbooks but their faces were more octagonal. There was a time where every character I was drawing had a hat. I had an art show in Copenhagen in my early Mikkeller days and I figured it was a good time to name the characters. I always called the one with the hat Henry, after my grandfather, and I loved the play on the Billy Crystal/Meg Ryan thing so the puffy-haired one became Sally. 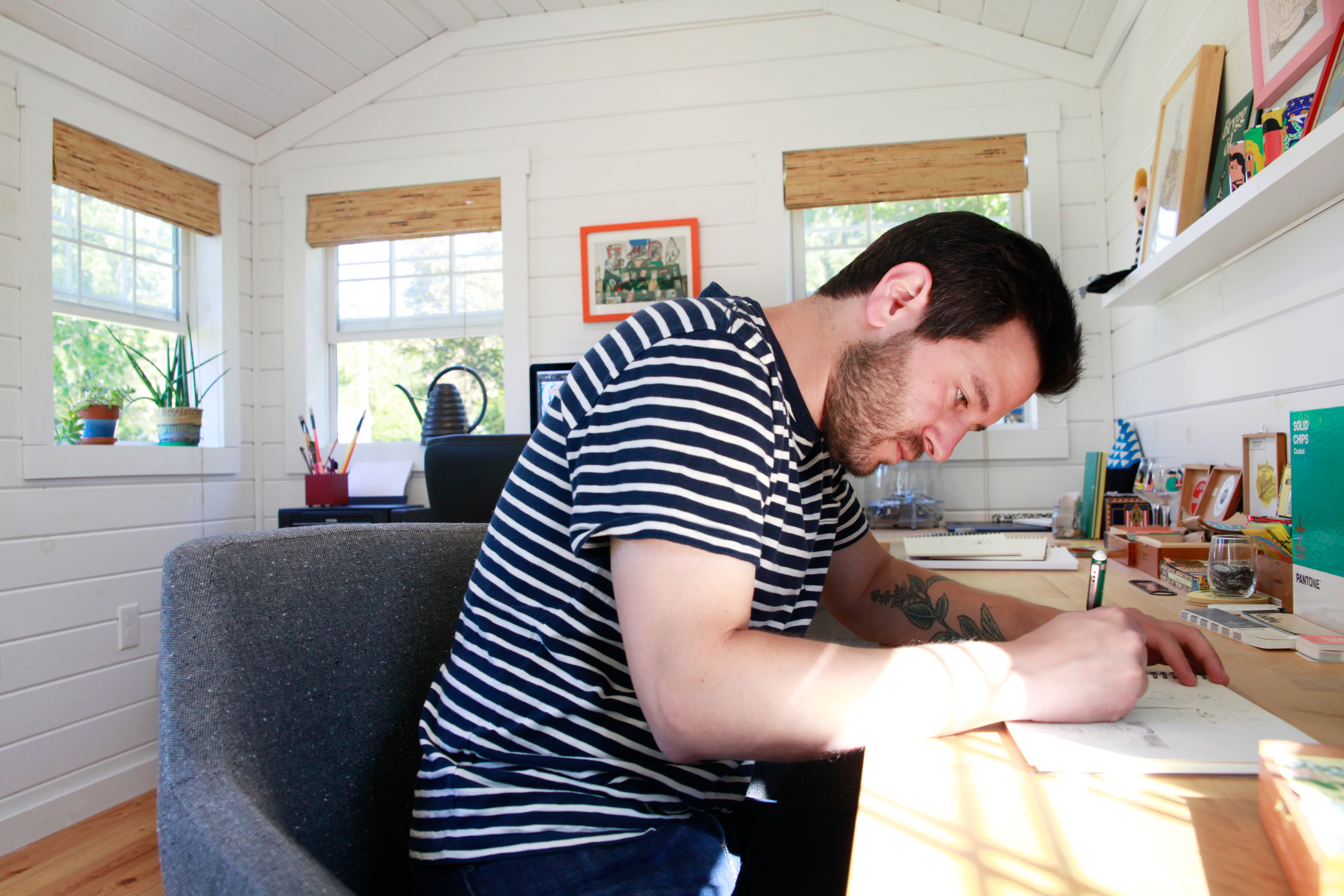 Mikkel Borg Bjergsø, was a Danish physics teacher before he turned to brewing. Do you have a secret specialty outside of visual art?
Nothing that I could ever turn into a career. I'm a decent bowler and I'm quite lucky winning prizes from the crane machines at the beach.

When I first encountered your labels, they felt like they flew in the face of typical beer packaging. How aware were you of the craft beer scene before your work with Mikkeller? Was the intention all along to make something that felt radically different or was it more of a side-effect of not being steeped in that world?
I started working with Mikkeller almost 9 years ago. Bottle shops weren’t crammed with choices back then and to be honest there wasn’t much of a label game at the time. Labels felt very formulaic back then and there weren’t a lot of standouts. Also, you have to keep in mind that I wasn’t hired on full-time from the beginning. I was only hired to make one label — no promises of more work after that. So my goal was to make something fun and something that felt natural to me. I wasn’t thinking long term and I honestly wasn’t thinking too much about beer either.

Tell us a little about your workspace.
I work in a small, Amish-built studio in my backyard. It's about 20 steps from my house so the commute is pretty nice. Our assistant designer Ben Kopp works here with me four days a week. It's just enough space to accommodate two sizable desks and have the two of us working comfortably without getting in each other's way. The studio backs up to a garden center and some open land. The nature-y vibe is pretty nice. Bunch of foxes and deer hanging out and lots of birds chirping. It's nice to have all the windows open when neighbors aren’t running their lawnmowers.

Considering the pretty high volume of beers Mikkeller puts out, do you have time for personal projects — work outside of work?
I just did a poster project with Google, but aside from that, I don't take on much freelance work these days. My free time is spent with my family and sometimes I do art events with our new project, Mikkeller Editions.

What can we expect to see from Mikkeller Editions?
I recently started this project with Mikkel. We release limited edition screen-prints and risograph prints. All artwork is signed & numbered. I plan to continue to build that project and release new artwork with more frequency. 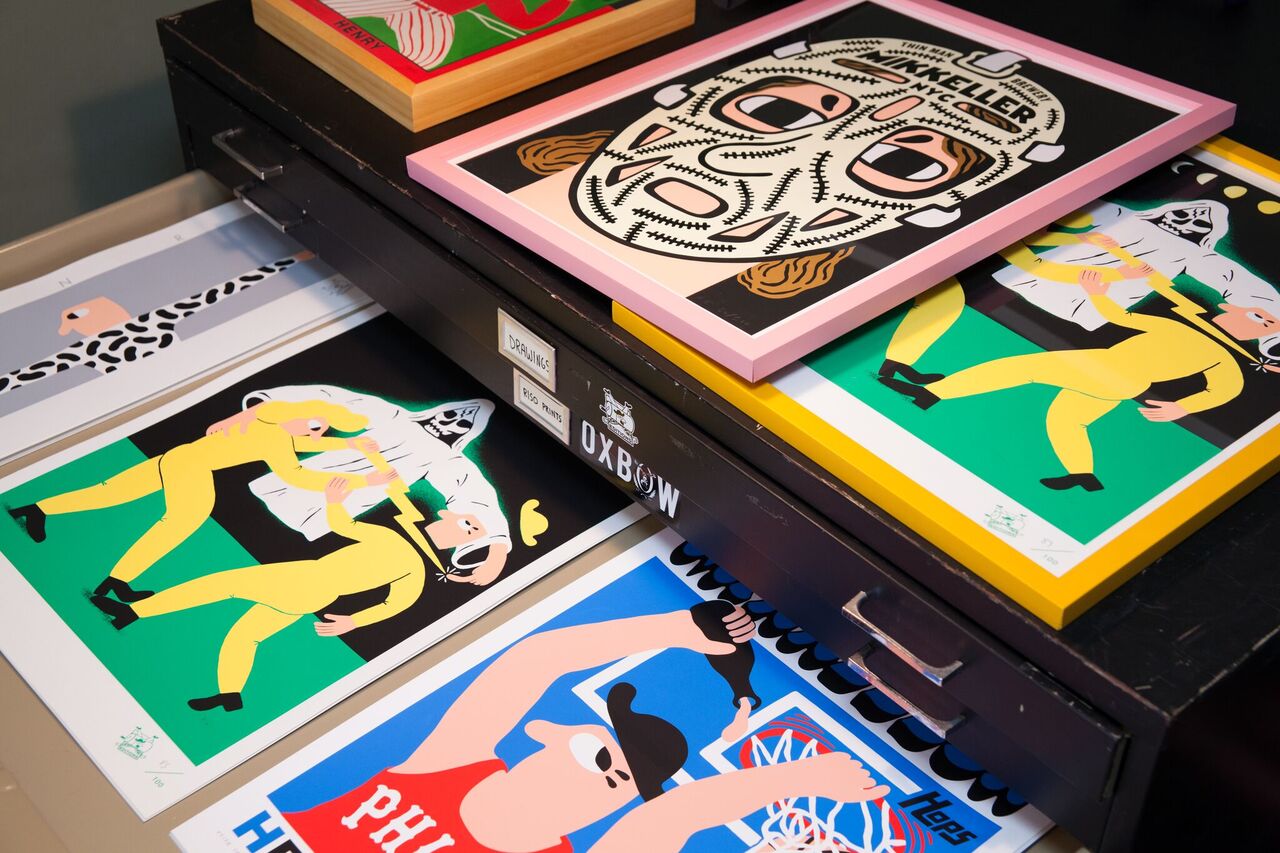 Alright, time for the rapid-fire round. Favorite music to work to:
Stereolab, Smog, The Pastels

Best Philly cheesesteak:
It's been awhile for me. I would never turn down the chance to eat a good one but I definitely don't seek 'em out anymore. But if you asked me this question a long time ago I'd probably have leaned towards Pat's.

Favorite Mikkeller beer:
I love the beers at Warpigs [Mikkeller's brewpub in a former slaughterhouse]. I hang out there any chance I get when I'm in Copenhagen.

Bucket list vacation:
Iceland with my family. I'd, of course, like to visit our bar there but really want to explore the countryside.

Cure for creative block:
Mikkeller's design department has been a team of two for just over a year now. We’ve never both been blocked at the same time so we manage to always figure something out.

Go-to getaway:
The Jersey Shore. I grew up going to Wildwood but since I've had a family of my own we spend a lot of time in Ocean City. I also love the river towns around here like Lambertville, Stockton, and Frenchtown.

With an unlimited budget, what would be your dream project?
Massive, giant, KAWS-sized sculptures of Henry & Sally in Copenhagen. 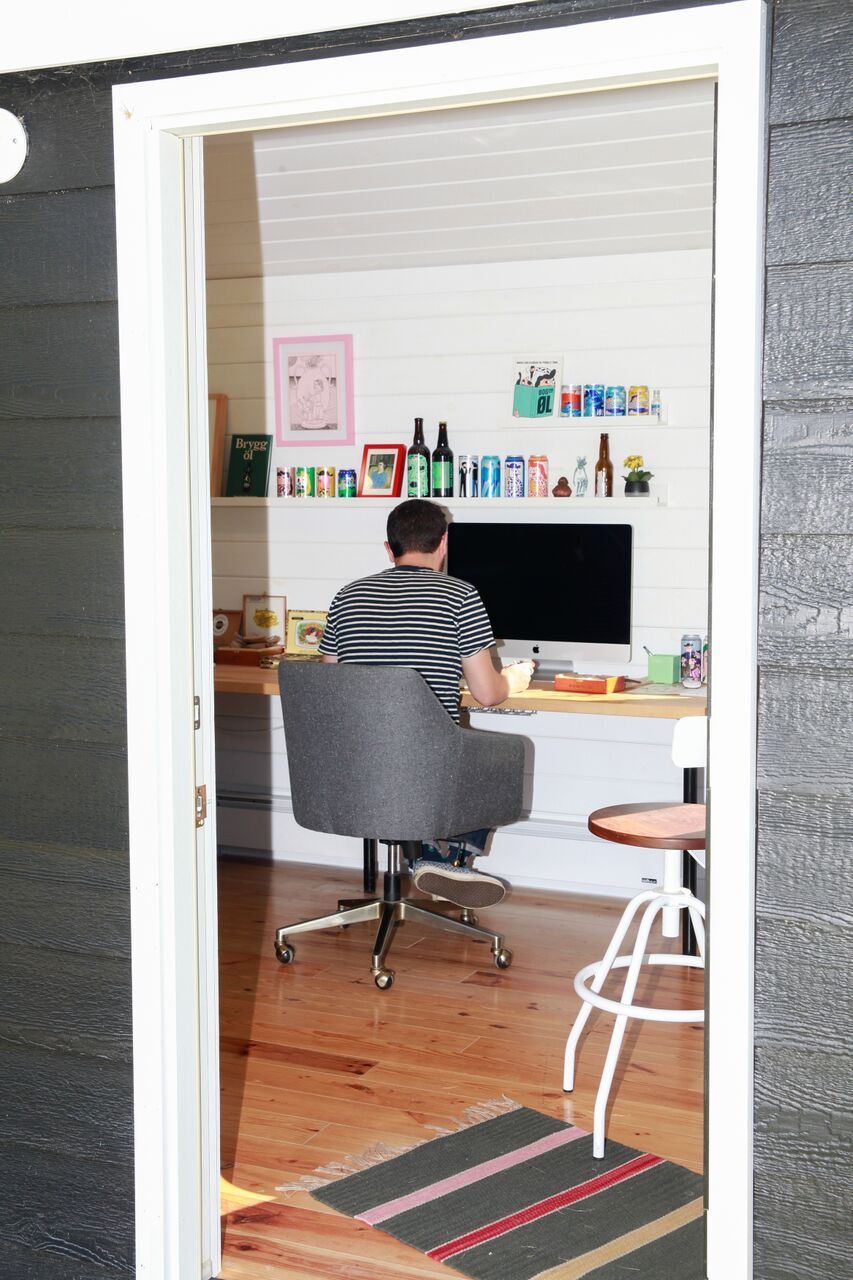