Discovering, collecting, and appreciating art is a road to self-discovery. What you like. What you don't. The feelings you feel. The feelings you don't. Art makes your soul grow, as Vonnegut once said. It's why we've created the Huckberry Artist Series, in which we're partnering with some of our favorite artists to share their stories and create one-of-a-kind, limited edition prints, posters, and tees.

Our exclusive Huckberry Artist Series continues with Cody Hudson (a.k.a. Struggle Inc.), an incredibly creative graphic artist and painter who makes giant murals and frequently works with cut paper shapes – a technique he originally started experimenting with during his early skating days. Cody’s also a dad and partner in the Michelin Star-rated Longman & Eagle restaurant in Chicago. We caught up with him in his Chicago studio, then headed north to Elhkorn, Wisconsin to go canoeing and talk about the tees, hats, prints, and Nordon candles he collaborated on exclusively for Huckberry.

We were making zines and stickers on Xerox machines, drawing on our boards and painting on ramps - just doing weird stuff.

If I had more time, I’d make more art. 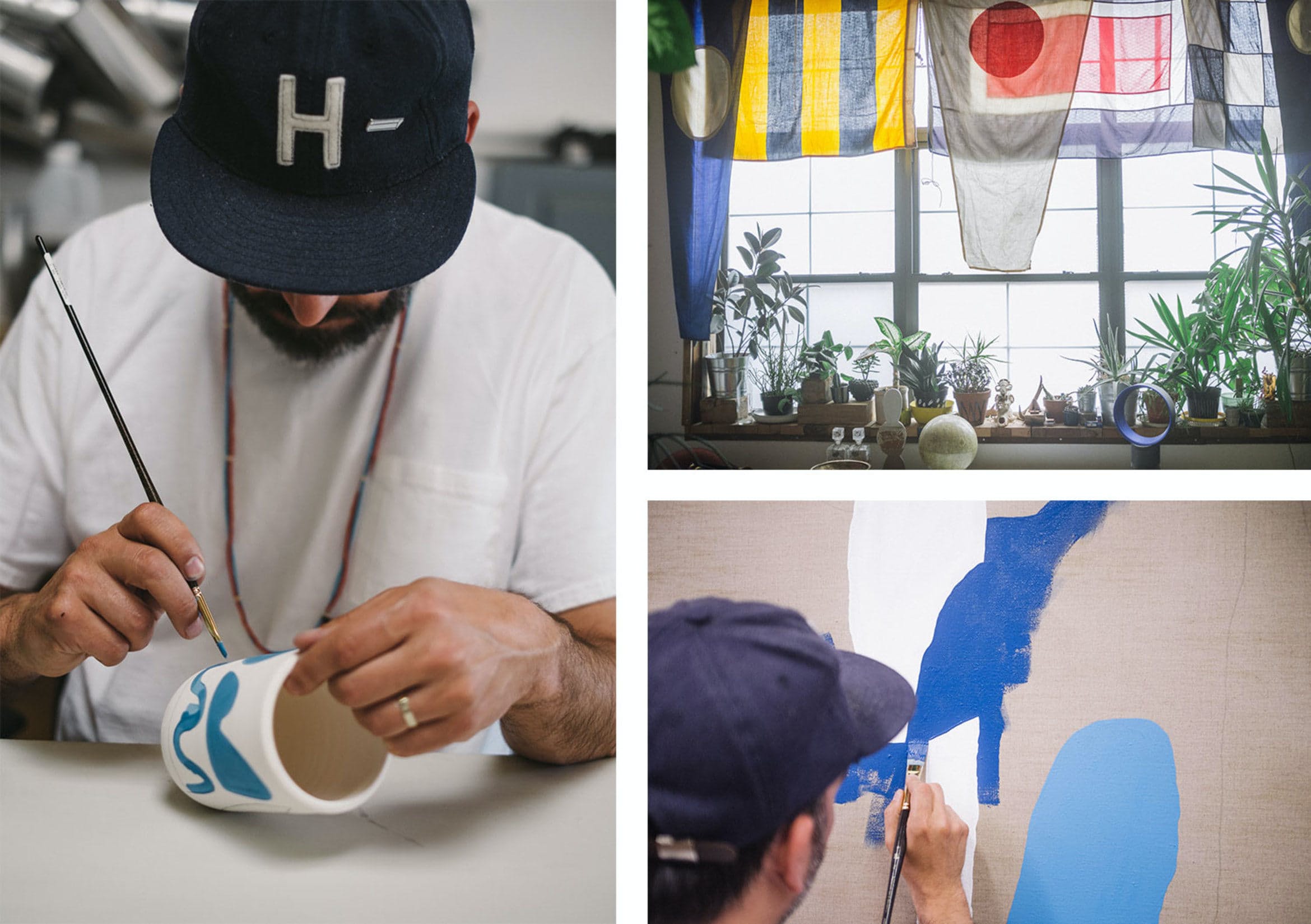 Cody can you walk us through your day? What does it typically look like?

I have two kids, so my schedule is pretty regulated. I get up at 7 a.m., bring Birdie to school, then head into the studio. I light some nag champa, make some tea, and make a plan for the day.

I usually split the day up between commercial work for Struggle Inc., my personal artwork, and also some time for working with the restaurant group I’m a partner in. I head home around 6 p.m., eat dinner with the family, get the kids to bed, and then either head back to work for a few more hours or go check in on one of the restaurants. Occasionally, I get to just relax and hang out with my wife Lori.

How has skating influenced your work?

It was my first real exposure to doing something art- and design-related. When you couldn't get out there skating, you’d sit at home and make something about skateboarding. We were making 'zines, stickers on Xerox machines, drawing on our boards, painting on ramps – just doing weird stuff!

Years later looking back, now I’m doing all this hands-on stuff with these cut paper shapes that resemble something I would have cut out of grip tape. I was so focused on art and design for a while that I didn’t realize how connected some of it was to my past.

When did you decide you wanted to be an artist?

I always liked drawing and making things, but didn’t realize it was an actual thing people could do for a living until I was older. I was working at Piggly Wiggly and doing odd jobs and one of those was at an animation house painting cells.

I met someone who talked to me about “graphic design” and it opened my eyes to wanting to learn that side of things as it seemed closer to art.

Where do you find inspiration and get recharged?

A little of everything: listening to music, taking a walk, rowing a boat around the lake, or even driving in a car with the windows down. To get inspired, sometimes I just need to get out of my normal head space for a minute to think.

Do you ever get tired of being in your studio?

My schedule is pretty tight, so if anything, I’d like more time in the studio. I also enjoy making site-specific work and working from other locations, so I work from California for parts of the winter or Wisconsin in the summer when I can. It’s nice to change the scenery up a bit and I think that affects the work and what materials you have access to as well.

I just make whatever I feel like and if some of it might look cool on Instagram, I’ll post it. My work has a very graphic quality to it, so I think the best place to see my work is larger, like a poster or covering a wall. There is something nice about seeing simple shapes and colors at a large scale.

A project you really want to work on?

I’d love to work on graphics for the side of an airplane. For some reason I always think about that one. I got one weird phone call about one ten years ago to do one and then I never heard back.

Tell us about your studio.

I tend to keep my space pretty clean and don’t have too much stuff around other than art and design books, some pottery, a few moon globes and a lot of plants.

In the work space, I have piles of scrap wood and other materials I keep collecting, a few work tables, some saws, and a big painting rack. I also have a small studio in the basement at home for smaller works on paper. We’re in the process of building out a small studio about two hours away in Elkhorn, Wisconsin that I’m hoping to use during the summers and school breaks.

What do you do when you're not making art?

I don’t have a lot of extra time, so if I had more time I’d make more art. I do enjoy things like spending time outdoors in Wisconsin, though, and I got the family a guitar this year so hopefully someone can learn to play that soon.

Who are some artists that inspire you?

As far as more contemporary artists, there is a so much great work being made right now. I’m digging Eddie Martinez, Trudy Benson, Barry Mcgee, Tal R, Jonathan Lasker, Laura Owens, Stanley Whitney, Jonah Freeman & Justin Lowe, the list could really go on and on.

For music, I tend to just listen to stuff that’s a little more mellow and quiet, kind of down-tempo just to keep things more mellow in the studio. I listen to a lot of slower guitar music, lots of dub, some ambient stuff. And then I kind of pick up the pace a bit during the day, throwing in some classic rock and acid house along the way.