Zanzibar: Not Your Average Beach Vacation

Head off the beaten path in this African country, where snorkeling off of white sand beaches and swimming with sea turtles are all in a day's work

fter 36 hours of travel by plane, bus, train, and taxi, it starts to feel as if you’ll always be traveling. So when my friend Kathy Karlo and I finally landed in Zanzibar, it didn’t feel quite real. Then, one of the first things out of our drivers mouth at the airport was “Hakuna Matata” — and he meant it.

Over the next two weeks we heard it countless times, reinforcing the fact that Africa is indeed a magical place, and this trip would be as well. 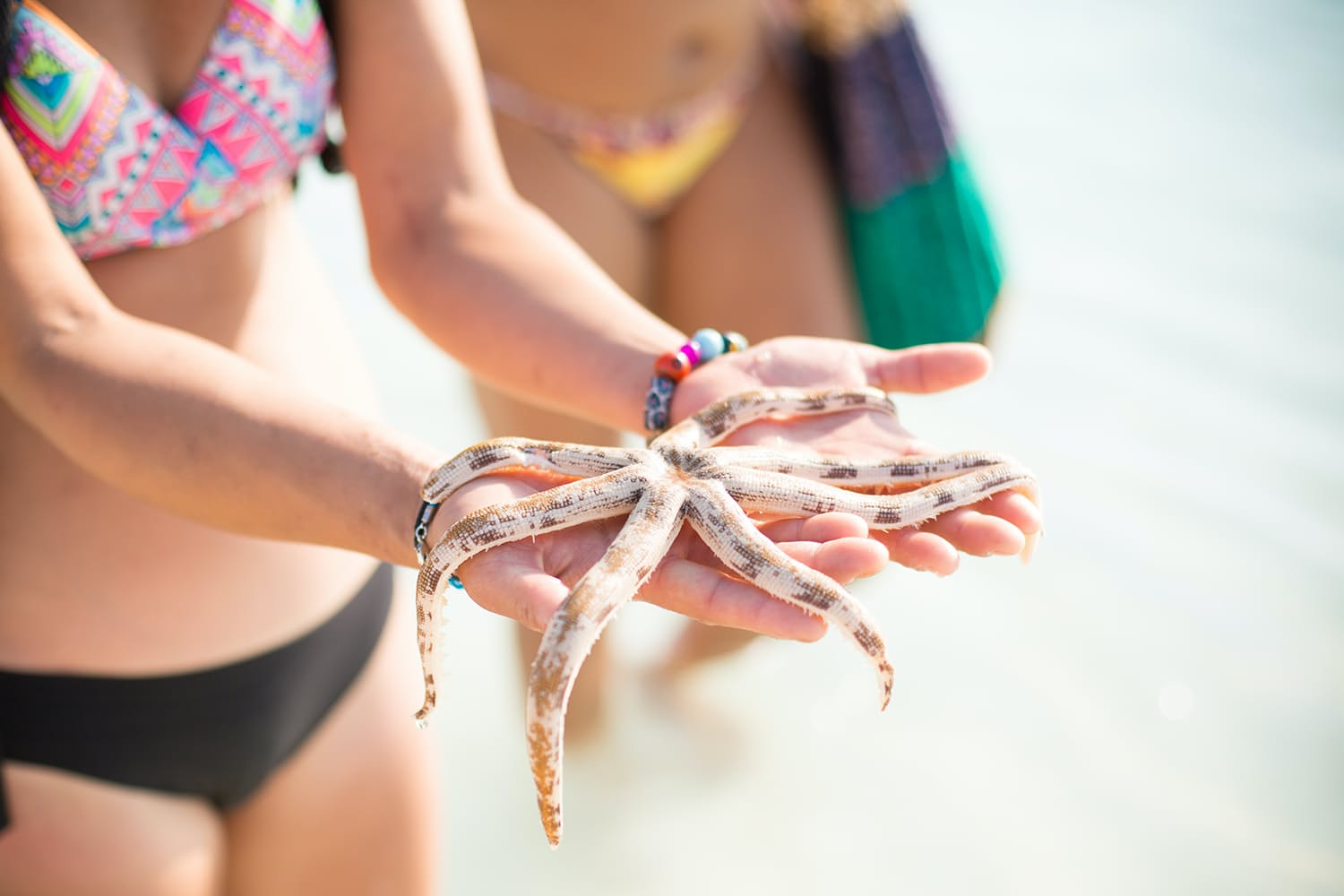 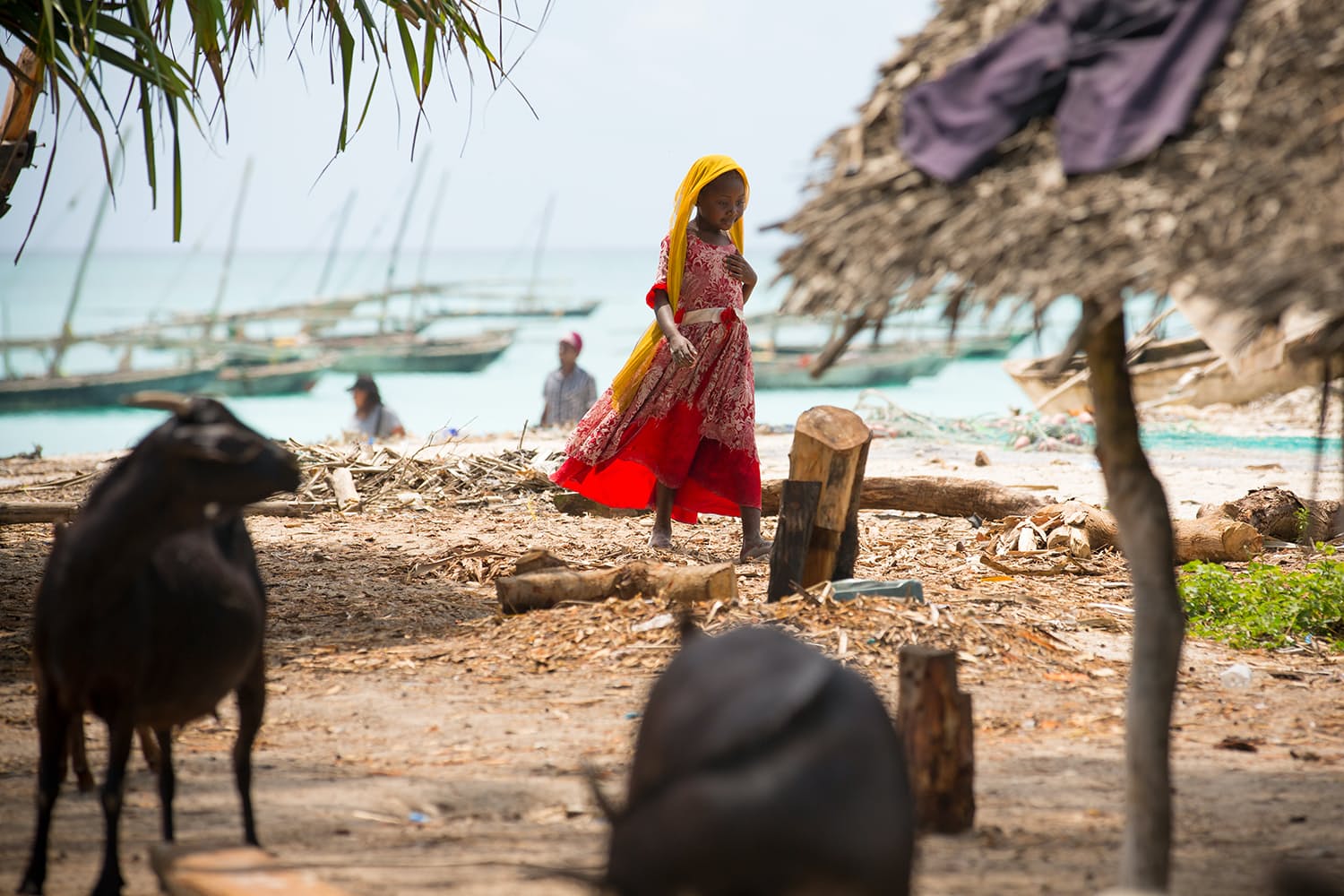 Kathy and I are both rock climbers, and weren’t totally sure about the whole beach life thing — if this trip has taught me anything, it’s that I’m terrible at sitting still. Seeing as it's exceptionally flat, Zanzibar isn’t for the hardcore mountaineer or rock climber, but you can still find more than enough excitement and adventure if you’re willing to look for it.

Think dodging ox carts, motorcycles, giant trucks, and the swerving dala-dalas; it's like playing a video game, but you only have one life. Riding a Vespa through rush hour traffic into Stone Town might be the most exhilarating thing I’ve done in a long time, and that’s saying something. 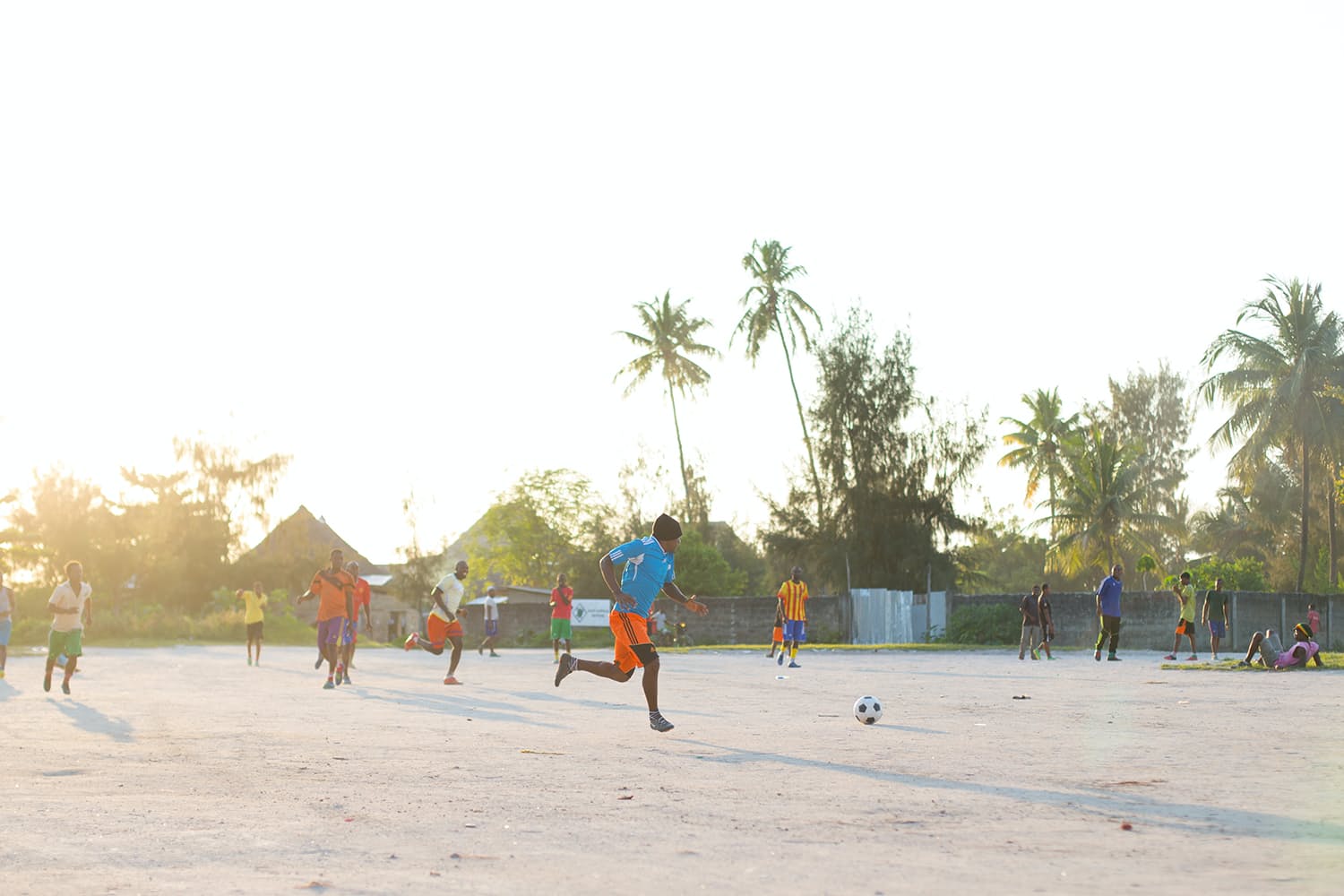 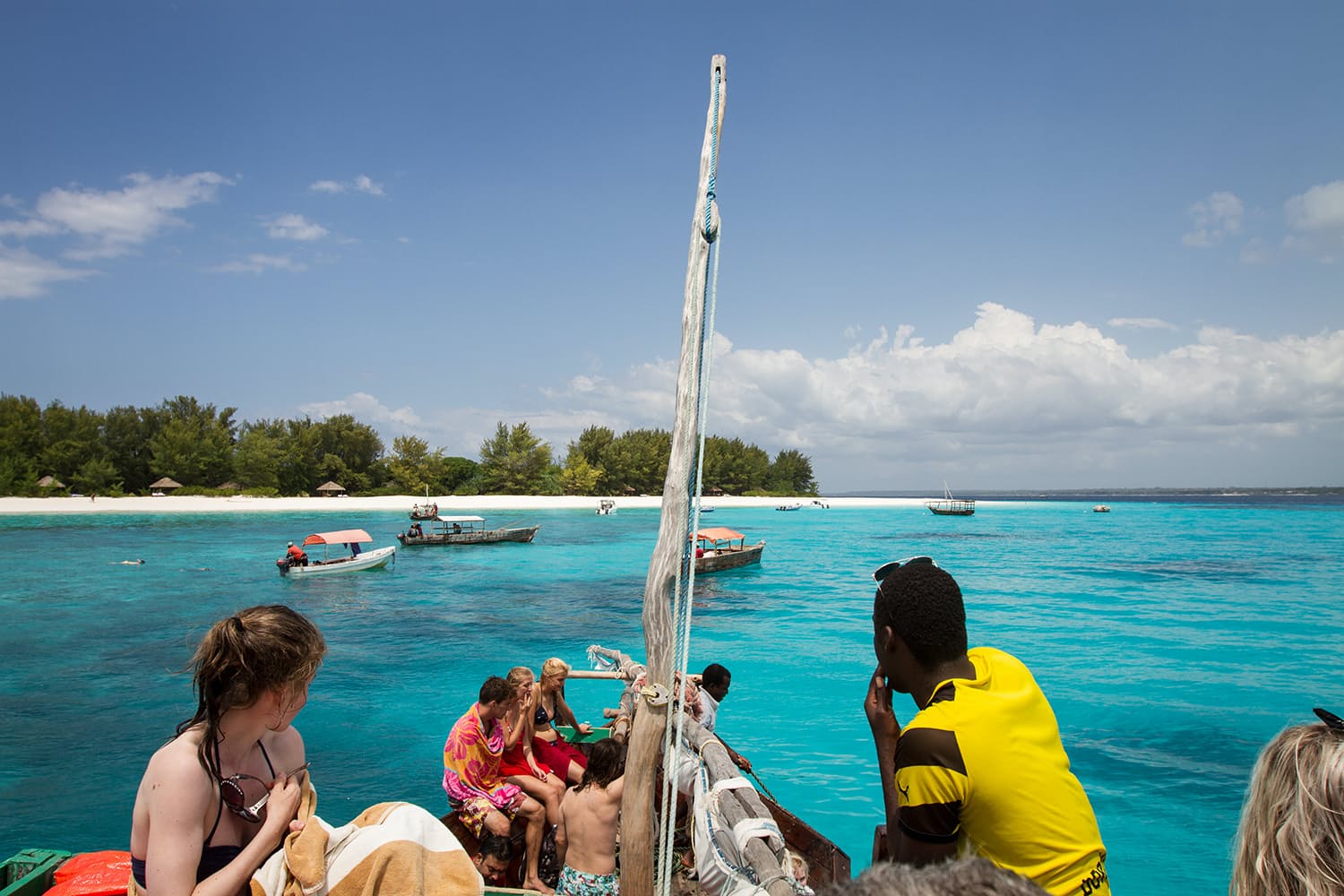 We spent ten days in Nungwi, at the northern tip of the island. Here, beach hotels, restaurants, shops, and bars are all jumbled together on top of stunning white sand beaches and the bluest water I’ve ever seen. People are everywhere at all hours.

Beyond making new friends and exploring the village, there’s tons to do besides soaking up the the sun, and it’s all inexpensive. Every time we had an opportunity to take a boat somewhere, we took it. Soaking in the bright equatorial sun on the top deck of a dhow, the gorgeous local wooden boats, on our way to snorkel in the stunning reef alongside the remote Mnemba Island, I felt as though I’d been transported back centuries to another era. 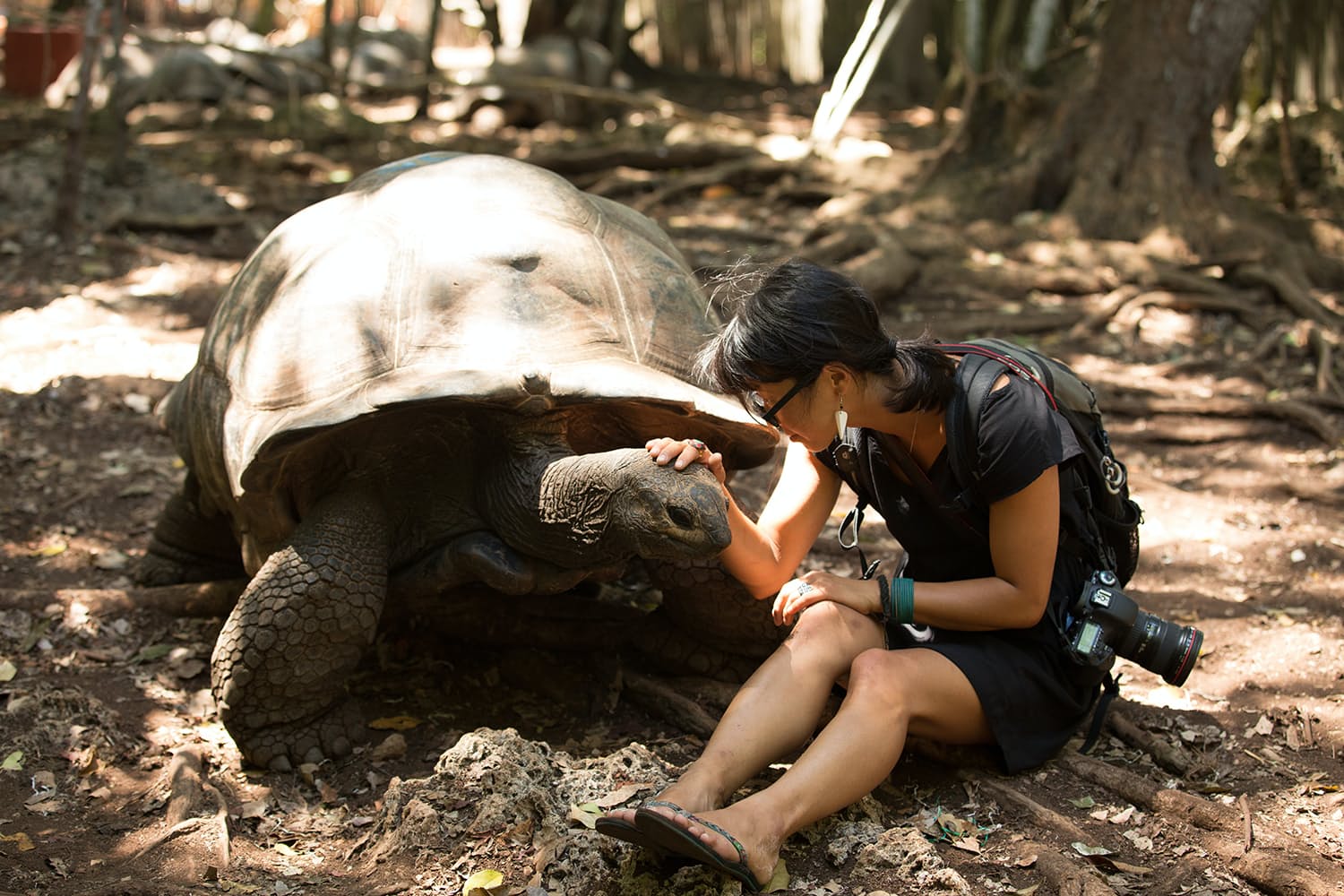 The animals were my favorite part of the entire adventure. We met Aldabra Tortoises, which narrowly escaped extinction at the end of the nineteenth century. Charles Darwin himself helped to raise the call for alarm in response to their rapidly declining population, and today some of the remaining tortoises live on Prison Island, a short boat ride away from Stone Town, the old quarter of Zanzibar's capitol, Zanzibar City. These tortoises live to be more than 200 years old, and their calm eyes hold a kind of aged wisdom I'd never seen in another creature. 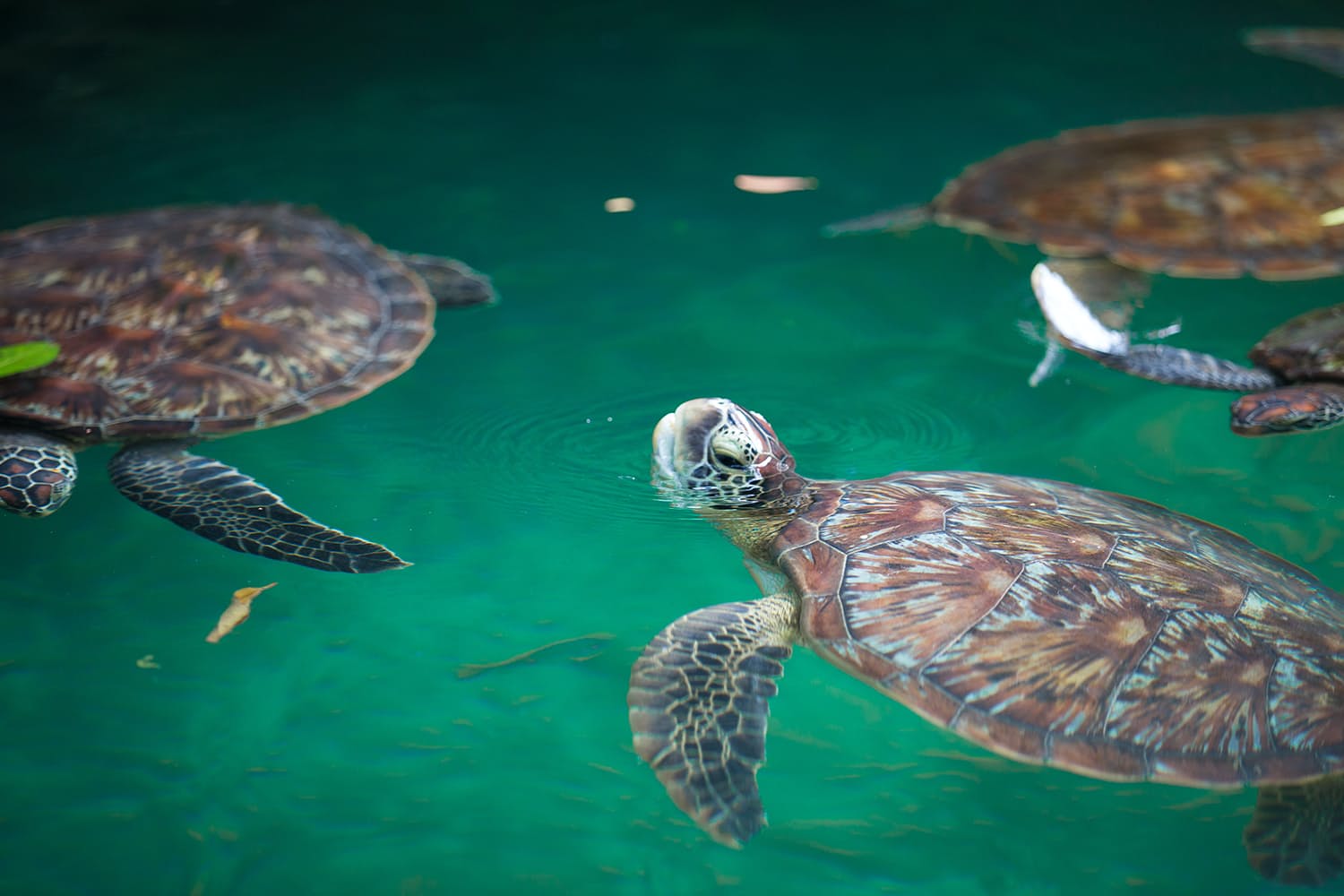 Swimming with sea turtles, however, was my favorite experience. Mnarani Aquarium is an incredible conservation center for the endangered Green and Hawkbills sea turtles, and has both open salt water lagoons and a closed one for baby sea turtles and sea turtles recuperating from injuries. You can swim with these gentle creatures and feed them by hand. 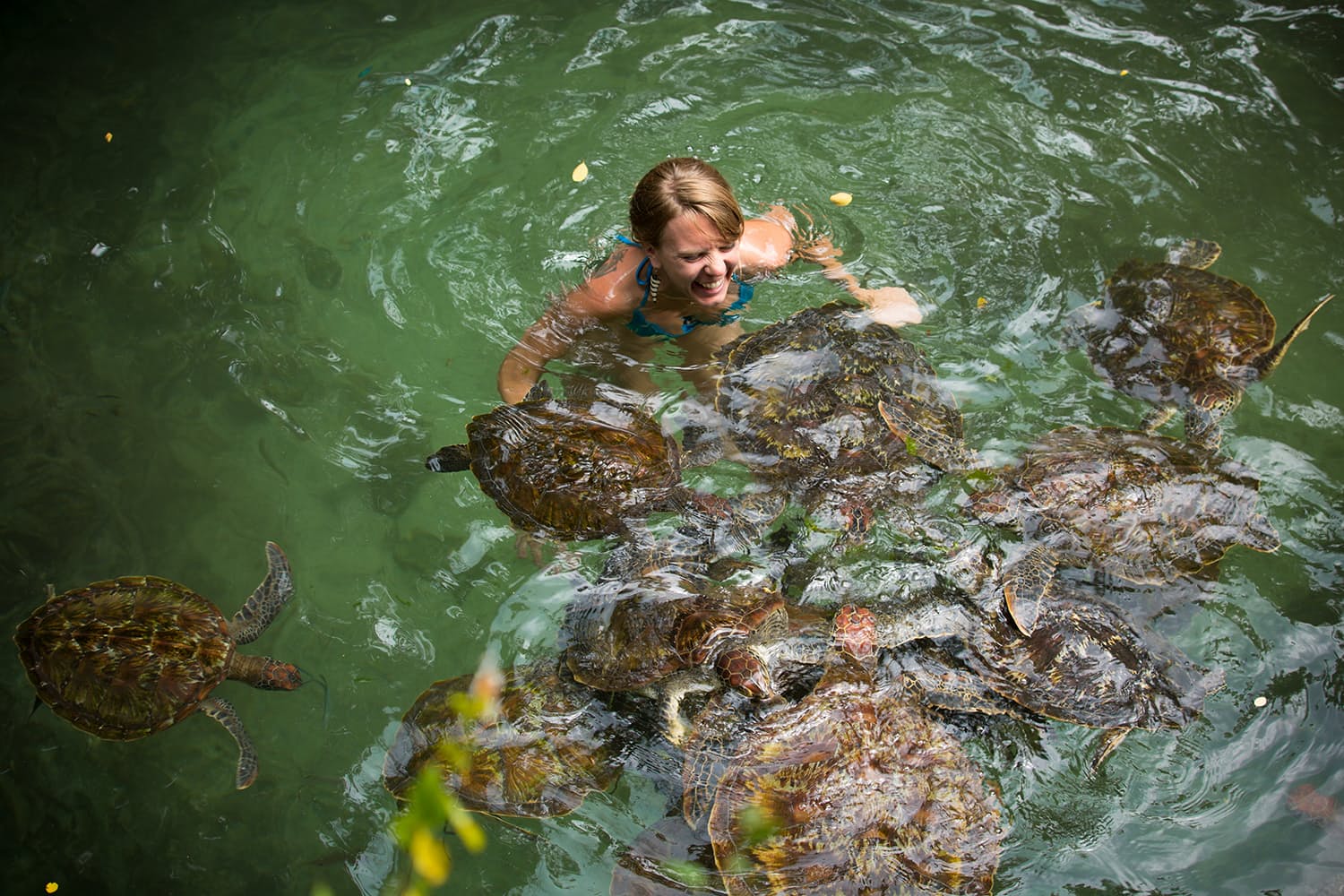 Another day we rented bikes and rode out to some recently discovered caves, complete with hundreds of tiny bats. We made Zanzibari friends everywhere we went, and they taught us bits of Swahili and told us stories of what it’s like to grow up in a place so very different from where we’re from. 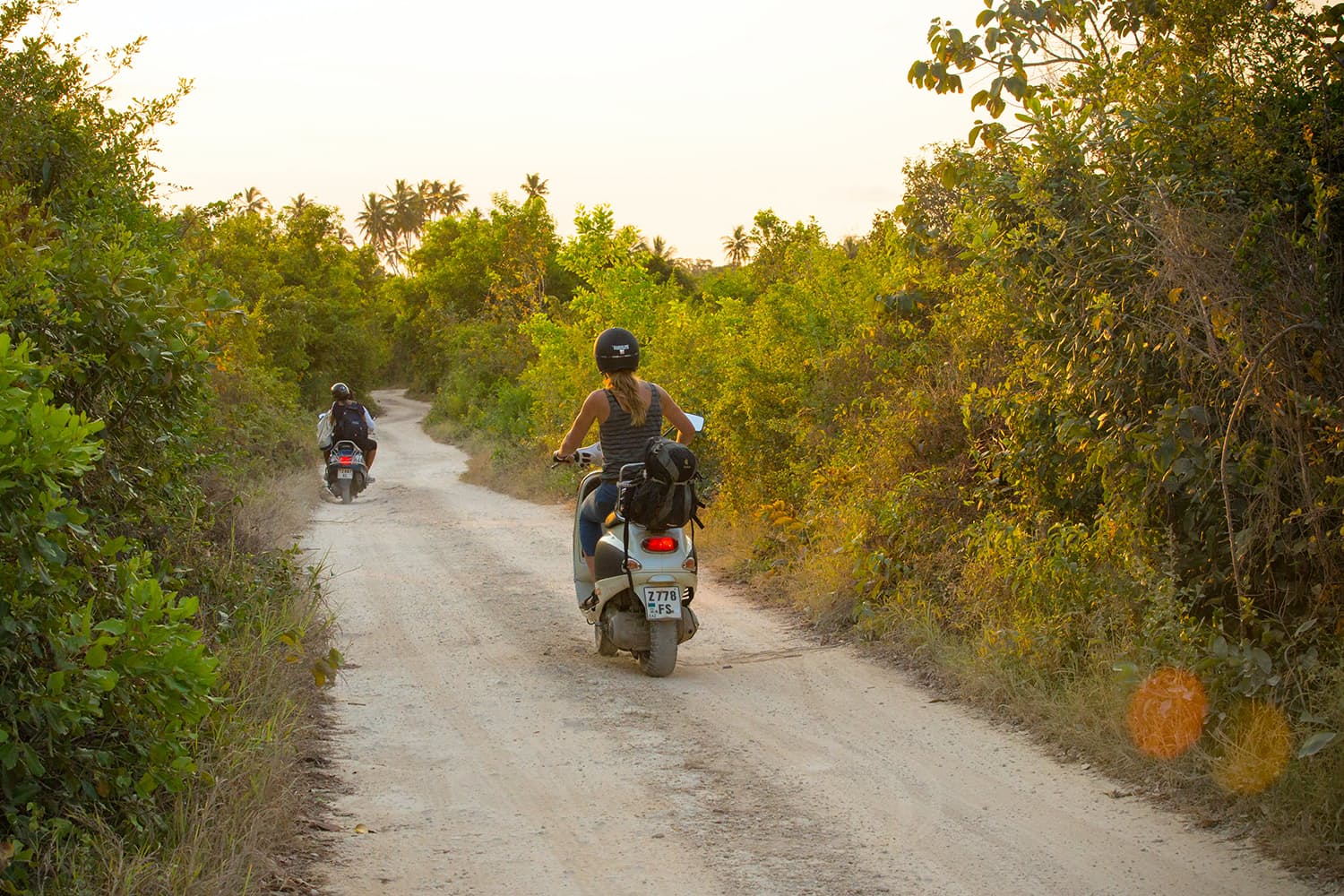 Two wheels are my preferred mode of travel, and when you’re going the distance in a short time a motor makes sense. You’re open to the elements, the smells, the smoke in the air and the smiles of the people.

The first time we rented a Vespa we cruised from Nungwi to Jozani Chwaka Bay National Park, the last stronghold for wildlife on the island, some 80 kilometers away. 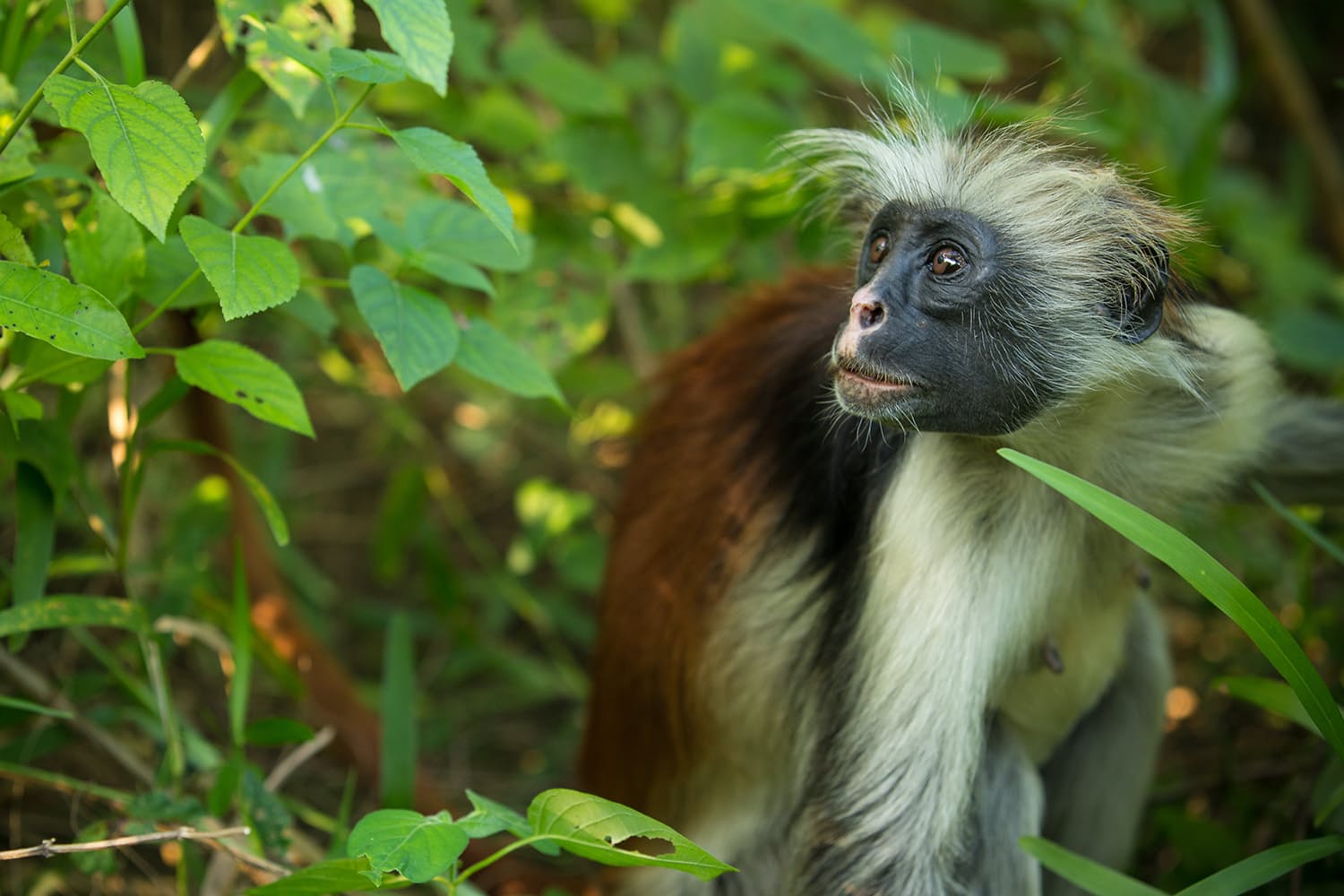 Just under ten square miles, the park is home to the small population (less than 3,000) of the Red Colobus Monkey, an endangered species native to Zanzibar. We took the long route along the coast, stopping at Zanview Inn for lunch — where I may have had two of the best coconut smoothies I’ve ever had, not to mention the most incredible lobster curry on the planet. The only customers, we relaxed in a stunning loft over a bar, looking down at the Indian Ocean.

The park was small, but lush and wild. The monkeys are far from shy, and seem to almost pose for you, their bright red backs brilliant against the bright greenery of the jungle. We rode back in the dark, stopping again at Zanview for dinner, and stumbled into the hotel late, dirty and exhausted — exactly the way we like it. 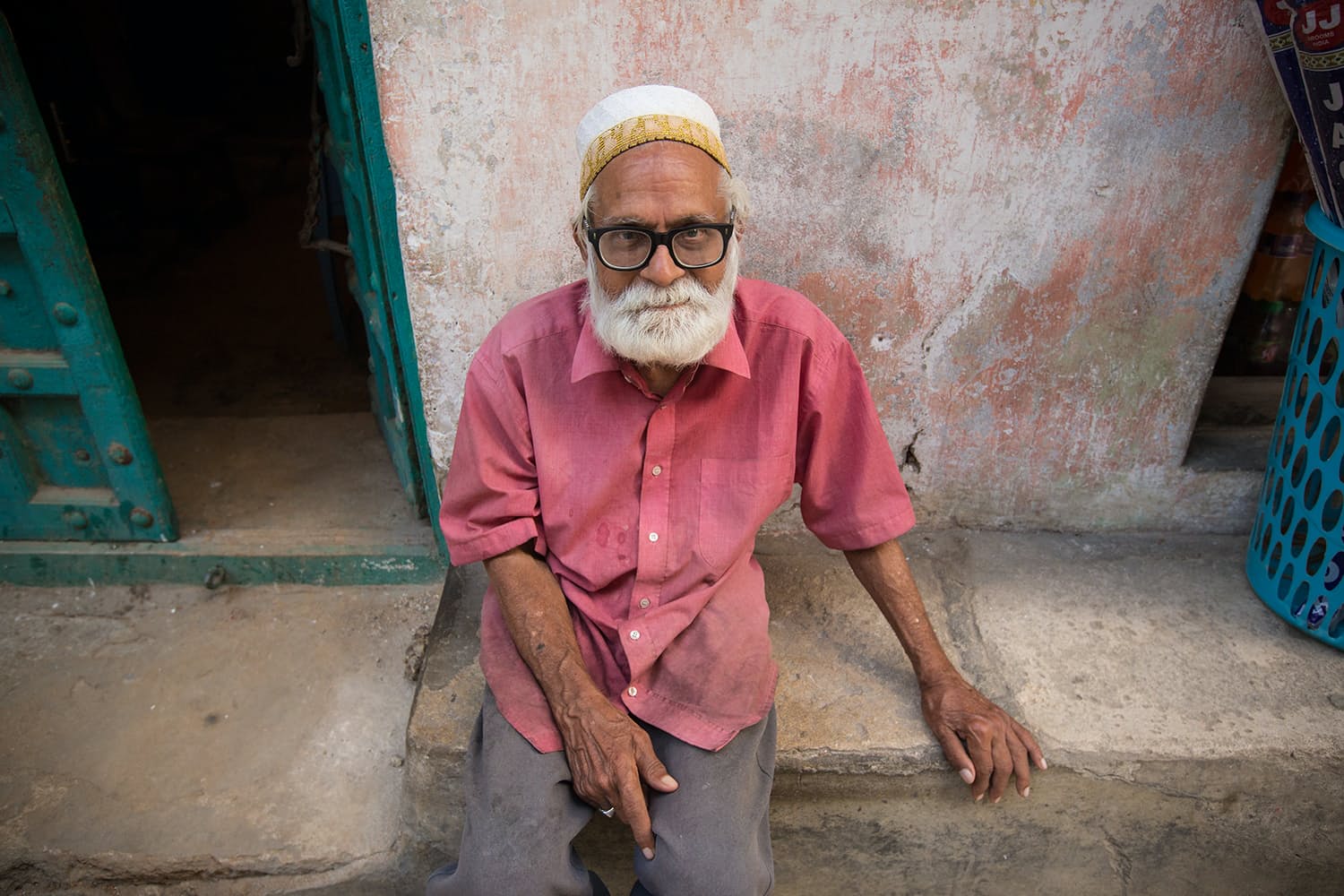 Dense, tightly-packed buildings crowd each other in Stone Town’s Shangani District, where we stayed with Benj, an Australian filmmaker friend. His apartment is at the top floor of ancient building, where an unruly rooster awakens us each morning before the call to prayer echoes through the streets on a rusty PA system.

I remember reading about Stone Town as a child, and my imagination painted it with wild colors. In reality, it was even brighter than I imagined. The twisting alleyways and stone houses were built in the early 1800s when it flourishing as a trading center, renowned worldwide for its spices. 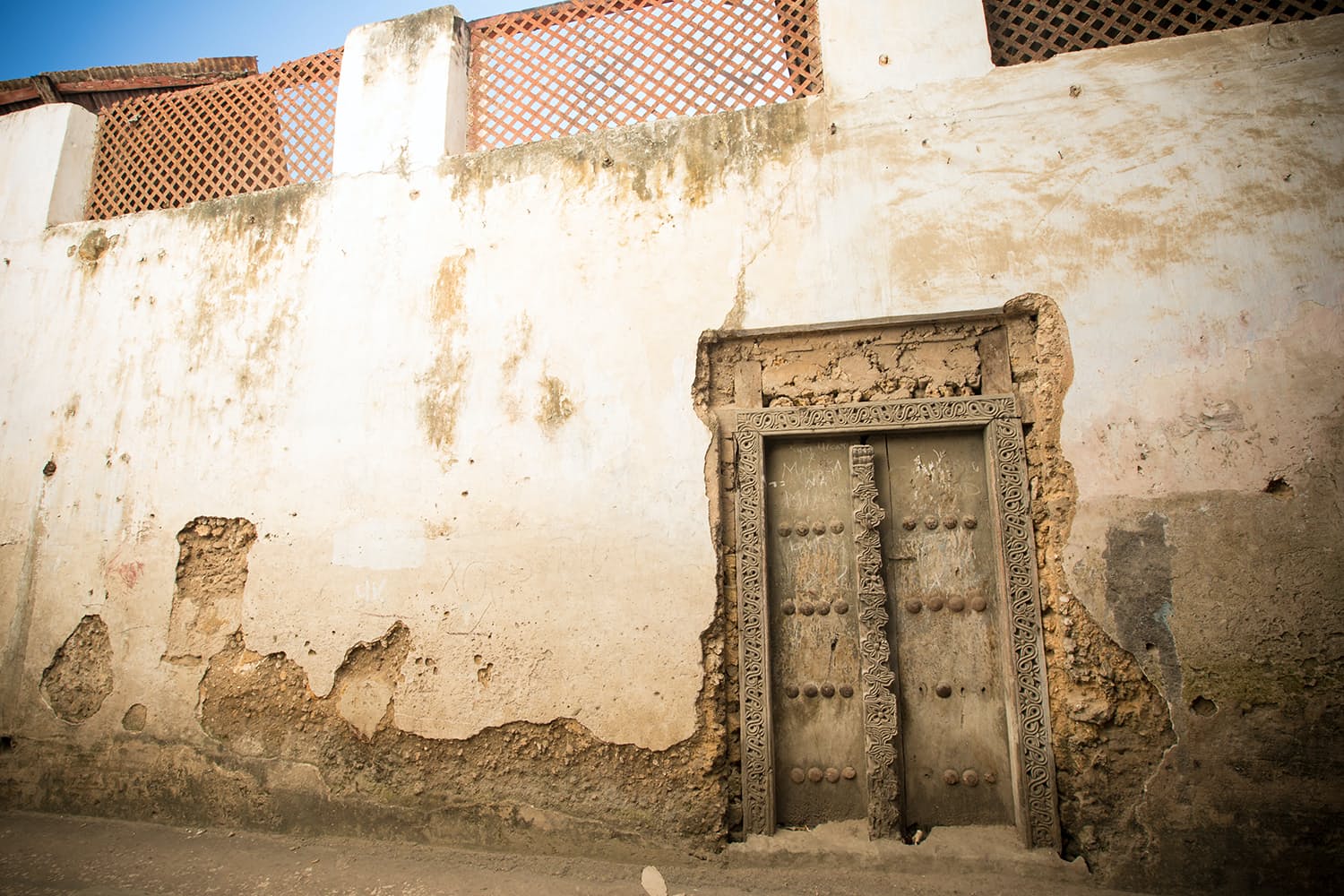 By the end of our five days there we were getting the hang of it, but at first we’d enter the alleyways and pop out in a different place each time. Regardless of sense of direction, Stone Town is where I developed an obsession with doors.

Each intricately carved piece gives you information about the original, long-deceased owners — the ones with chains, for example, meant they were slave owners. Fish scales meant a fisherman lived there, and pineapples meant all were welcome. Each tells a story, an artistic time machine. 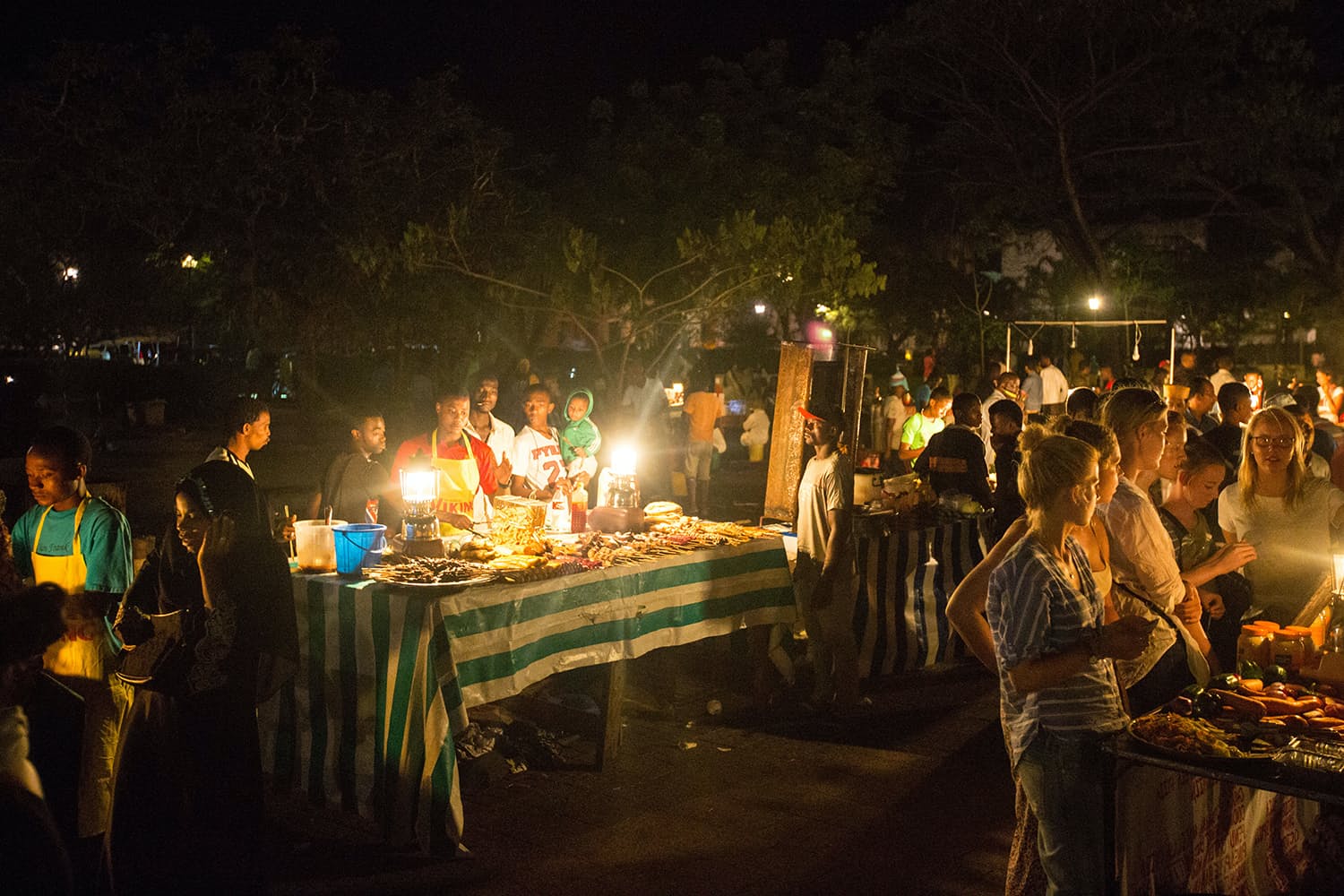 After dinner at the busy night market or at one of the delicious food carts in the alleys, we ended each evening at Babu Chai, a street cart parked in the same alley intersection every evening. Here we drank the best tea we'd ever had, served in ceramic cups. We’d sip our tea quietly, watching people walk by, the ubiquitous children that never seem to sleep running by laughing, someone haggling at the shop down the street.

Travel changes us, yes, but I’ve found it also brings out the core of who we already are. Africa reminded me to be curious, to boldly explore those little things or the people that tickle my interest. It reminded me to stop and say hello, even if I don’t know how it will be received. 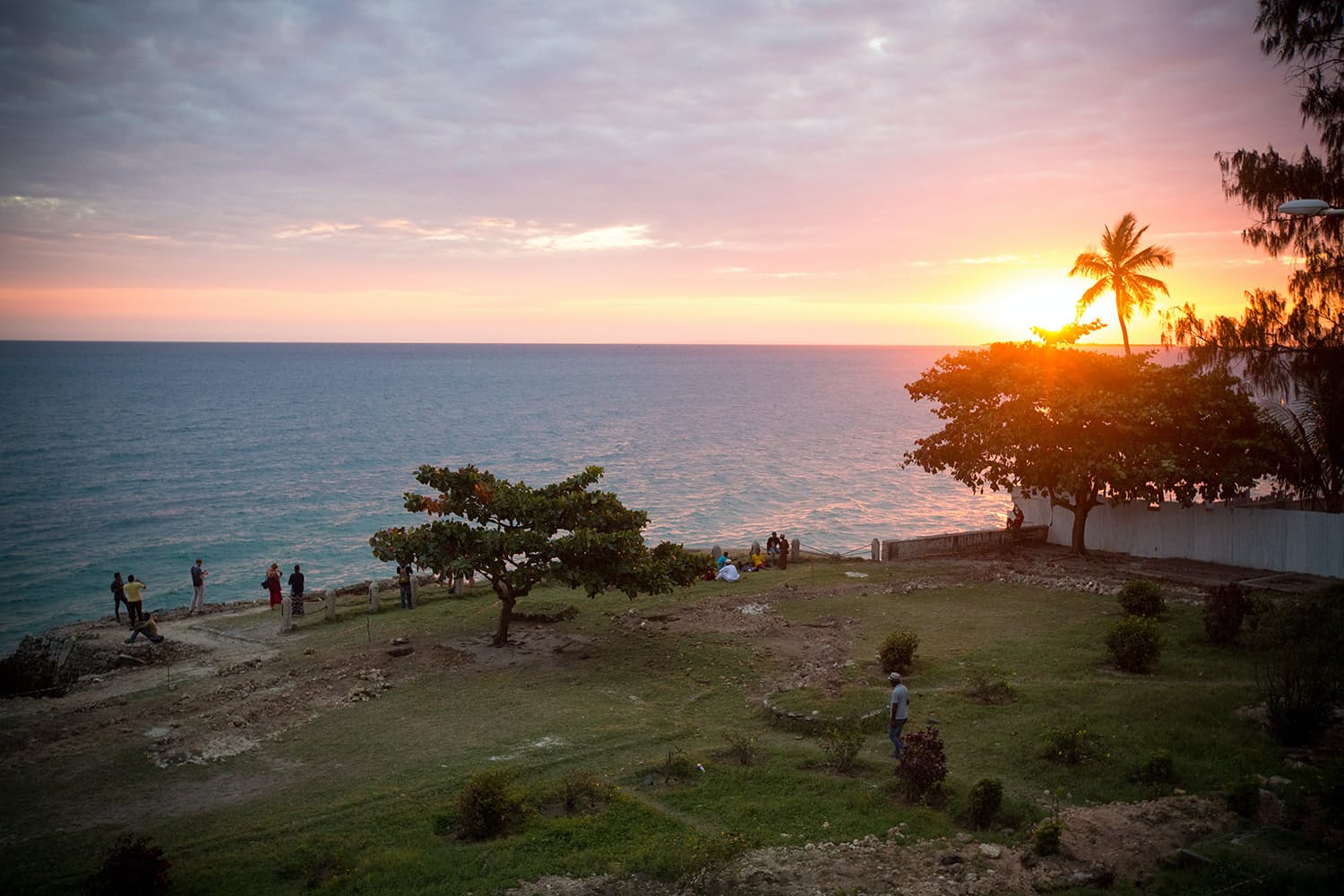 Zanzibar, like many places in Africa, experiences poverty — you don’t have to go far to see how many of the people live there. This poverty is eye-opening and powerful, because it reminds us that this is how much of the world lives. The Zanzibari are incredibly happy, friendly, and healthy, but some of the people we met don’t eat every day.

Traveling in the developing world will change your perspective, as it has changed mine. This place, this continent, taught me to go with the flow, because nothing works the way you’re used to. It was like a symphony, with wildly erratic chords all coming together to form a song unlike any other. And if you go along with it, it’ll take you places you never dreamed of going. [H] 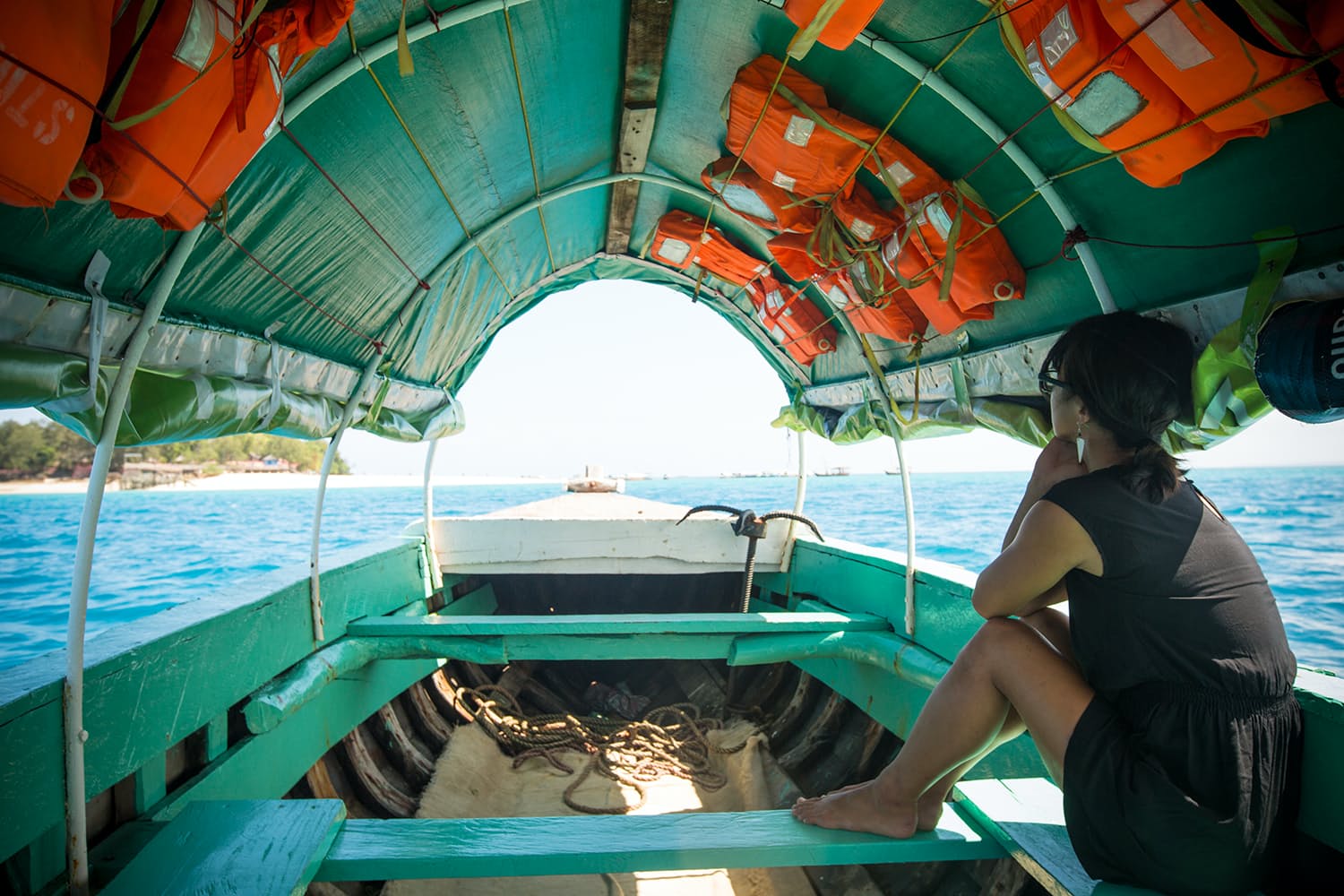 Learn the language
In Zanzibar, knowing even just a few key phrases of Swahili helps. The locals appreciate it tremendously, it’s a super fun language, and not hard. Swahili is beautiful — the cadence sounds like a song. We had a blast learning bits of it. And when you come home, you can drop phrases like Poa kichizi kama ndizi ndani ya friji, which means, “I’m cool like a banana in the fridge." People actually say this, and it’s amazing.

Skip the open drinks
Except for the sugar cane juice, which they make right in front of you, skip market drinks that haven't been factory sealed if you want to avoid getting sick. However, don't be afraid of the street food; some of the best meals we had were right off a food cart in a back alley. In our experience, if the locals are eating there, it’s probably going to be fine.

Wear bug repellant
Mosquitoes in Africa are tiny. Just because you don’t see them doesn’t mean they're not there. Wear bug repellent and sleep with a net; nobody wants malaria. 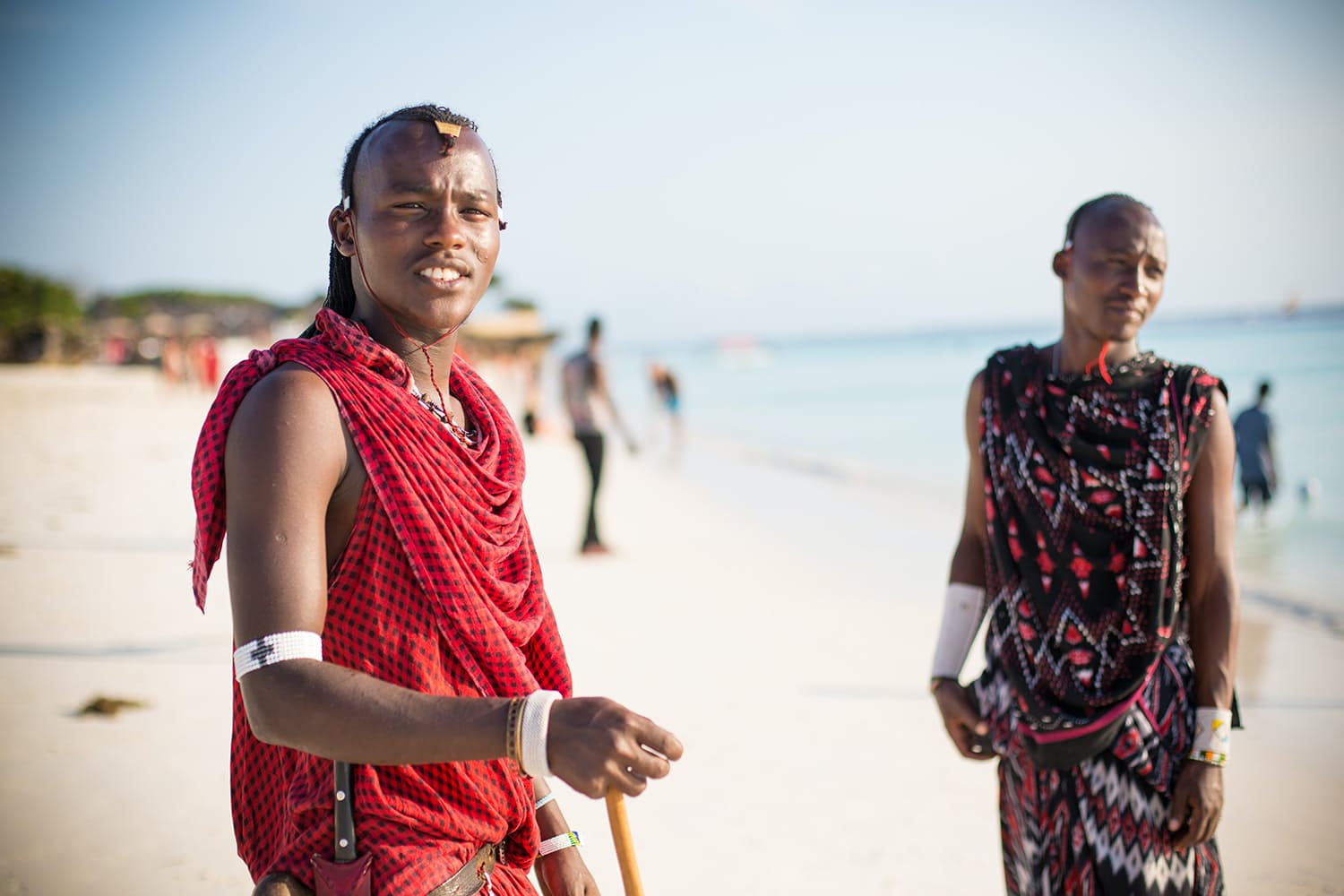 Respect the culture
Zanzibar is a predominantly Muslim country, but we saw lots of female tourists in tank tops and miniskirts. While it’s a tempting option to revert to Western dress, given the heat and humidity, we opted to cover our knees and shoulders in deference to the cultural practices. As a result, I feel that folks were more likely to talk to us, especially the women. On the beaches, in the resorts, and while out on tours, it's fine to rock a bikini and go shirtless, but in the villages and in Stone Town it's more respectful to cover up.

Ask permission before taking a photo
Many people don’t want their picture taken, so ask before snapping a shot. I will note that folks were more likely to say yes if we asked in Swahili, so add it to your list of phrases to learn if you want portraits.

Trust the locals
We often gave money to a random person who promised to take us to an island the next day, or to rent us mopeds, and each time that promise was delivered. I’m sure that’s not everyone’s experience, but we found the locals to be overwhelmingly honest and trustworthy. That said, don’t be afraid to haggle a little at the market. 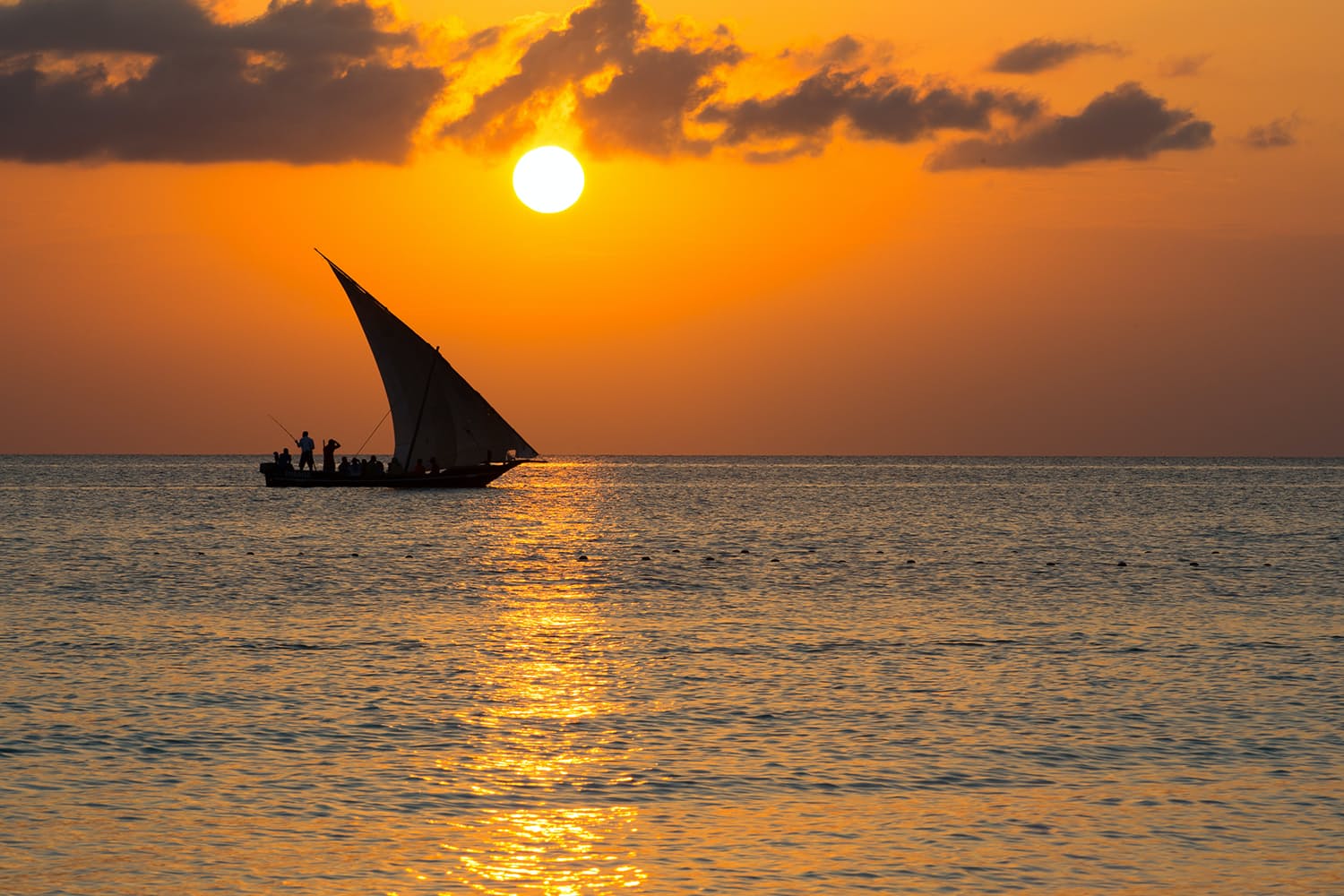 Aly Nicklas is a writer, photographer and filmmaker based in Colorado.
She has a penchant for cabins and the simple life.
She also likes waking up in new places, many of which can be found on her Instagram here.