The Huckberry Guide to Skiing on a Budget

owder hounds and mogul addicts rejoice, because winter is coming. And this can only mean one thing: the lifts are beginning to run once again. The only thing that detracts from our unbridled ski-manic enthusiasm these days is the skyrocketing cost of the sport. In the last year alone, same-day lift ticket prices have risen as much as $20 at some areas — and that, of course, is just one part of the equation. Between airfare, lodging, equipment, tickets, and food (especially if you’re eating on the mountain), skiing has easily become one of the most expensive activities these days.

Which sucks, because skiing is awesome.

The only way you’re going to get on the slopes affordably these days is to be on top of your game — purchasing tickets in advance, planning far ahead, and strategically cutting corners when your trip is still far enough off that you can see where to do it right. Whether you’re a 100-day-season powderwhore itching to get back in the trees, or a "pizza-pizza-french-fry" newcomer to the sport looking to hone your skills on the groomers this season, we assembled a handy primer on how to prioritize your ski budget.

And to do this, we've enlisted the help of professional skier Cody Townsend for some tips and tricks on how to get the most out of your days on the mountain. In addition to being sponsored by the likes of Salomon, Smith, Swatch, and Backcountry (to name a few), Cody is also the co-founder of Arcade Belts, who has dedicated his life to the craft of sending it in chest-deep powder. 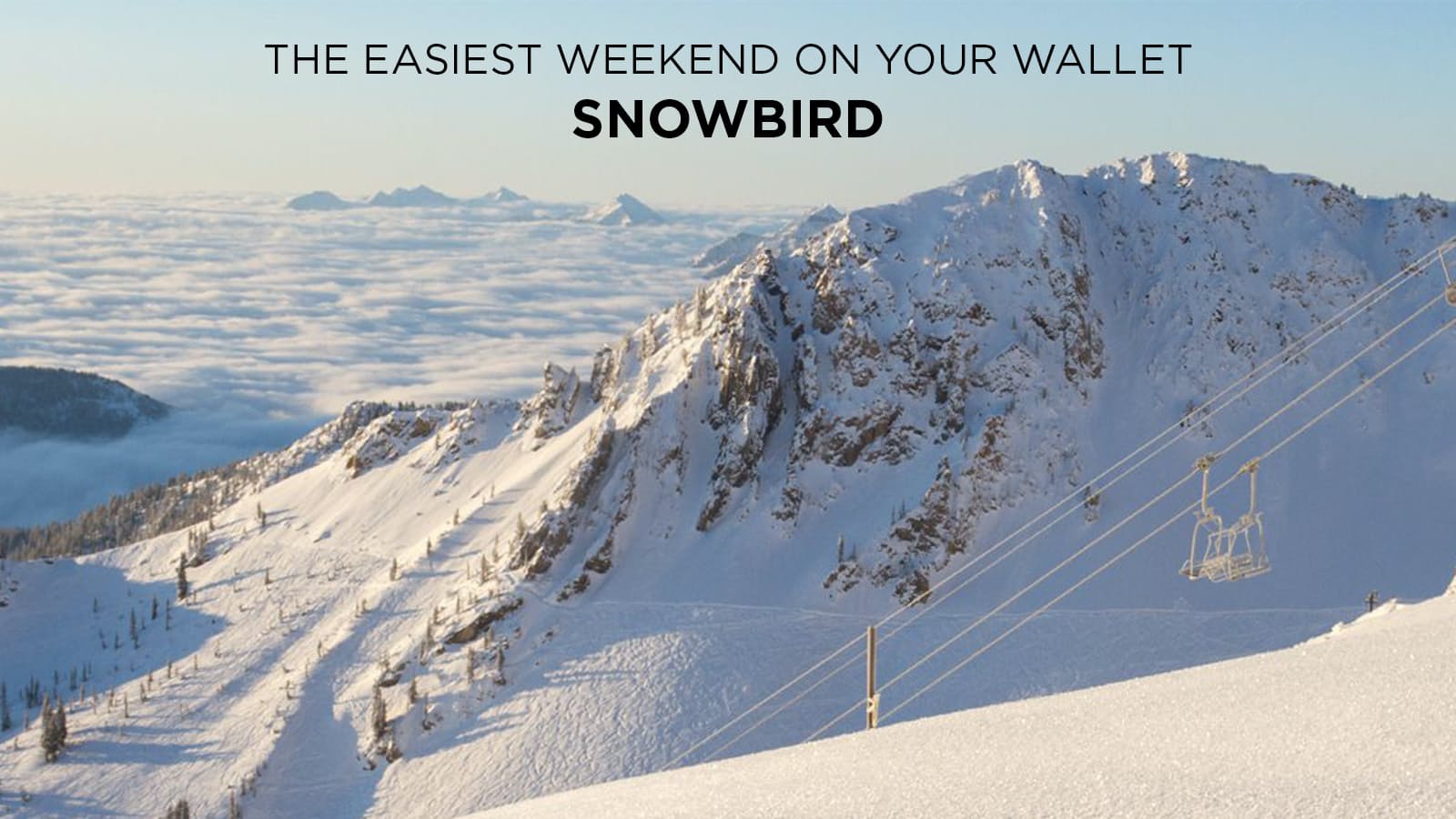 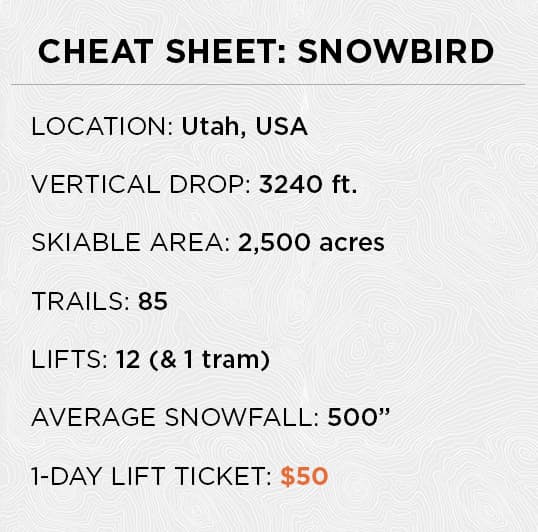 Snowbird is nestled in Little Cottonwood Canyon just outside of Salt Lake City, and is just a hop, skip, and a jump from a couple of other stellar ski areas like Alta, Park City, Brighton, Deer Valley, and Solitude. However, it is quickly becoming recognized as having some of the best skiing that Utah has to offer. Unlike its next door neighbor, Alta, Snowbird allows snowboarders (which could be either a selling point, or an endorsement for Alta, depending on how you prefer to navigate the trails). For its great runs and proximity to a major city (and, hence, airport), at $50 for a day lift ticket, Snowbird is one of the best deals out there if you're looking to hit the slopes quickly and cheaply, but still want to get some great skiing under your belt. Plus, we can wholeheartedly vouch for Wasatch powder, which calls itself "the best snow on earth." Bonus — if you're an advanced skier, be sure to take Aerial Tram up to Hidden Peak, make your way down the Cirque Traverse, and choose any one of the Double Black runs on either side of the traverse (the Lower Cirque is especially good). 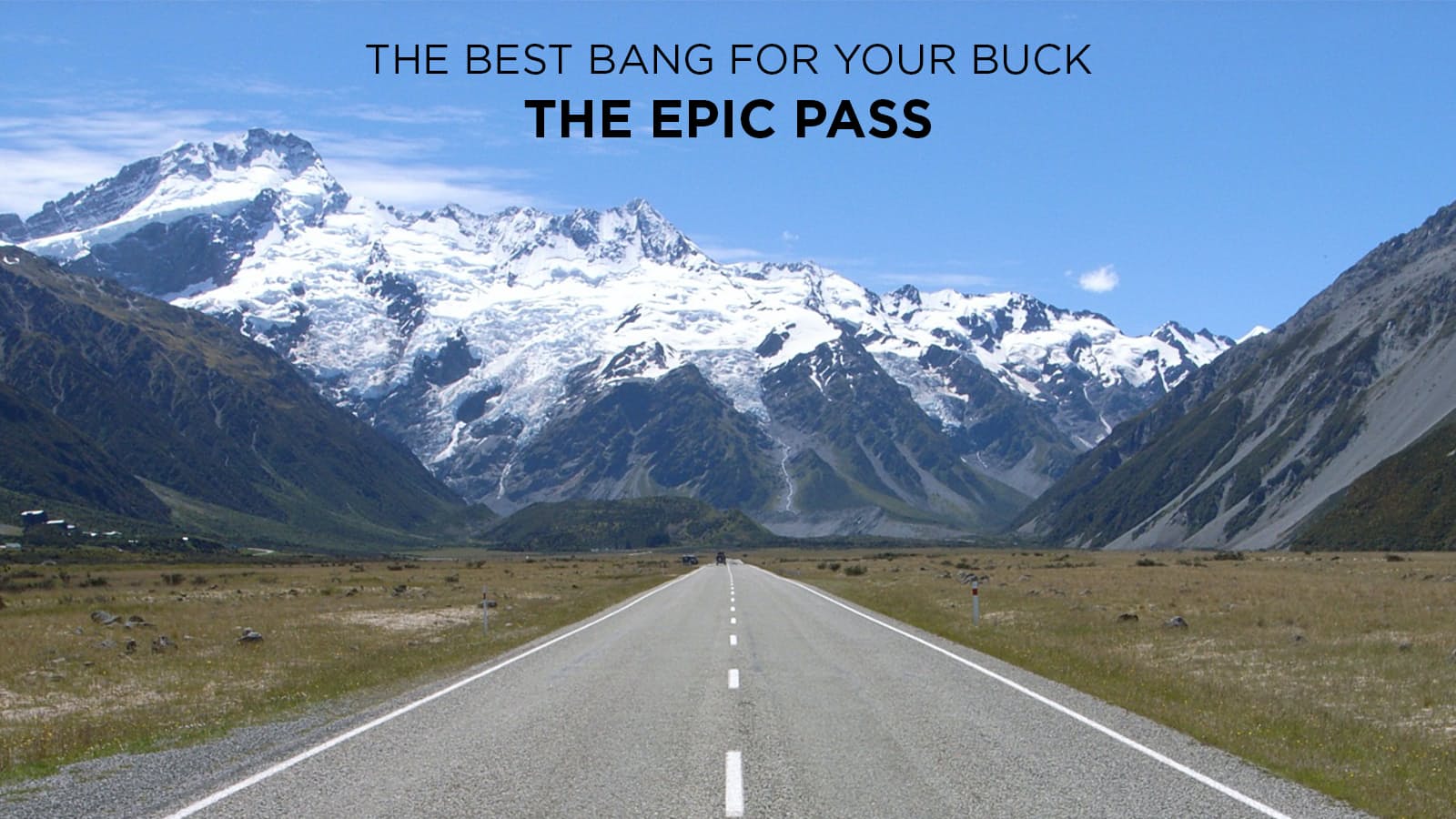 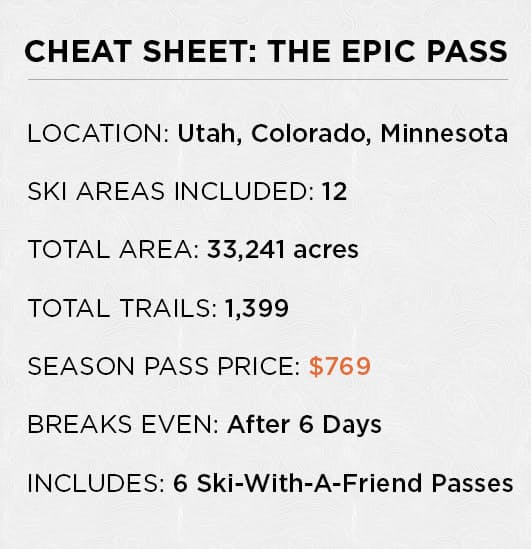 At $769, the Epic Pass is, on paper, the most expensive skiing option featured here — but don't be fooled. The Epic Pass is on an entirely different level of skiing. After paying a one-time fee for the pass, you gain complete access to 12 different ski areas for the duration of the entire ski season. And we're not talking about your garden-variety, bush-league skiing, either. Included in the scope of the Epic Pass are the likes of Vail, Beaver Creek, Breckenride, Park City, and Arapahoe Basin. The last of which, by the way, (if you've never been there), is a unique experience in North American skiing — with the vast majority of its runs available above timberline, many compare A-Basin to skiing in the Alps and the Pyrenees. The best part of the Epic Pass, perhaps, is that there are no blackout dates — once you're in, you're in. Also included in the deal are 6 passes to bring along a friend, free of charge (unless you're buying lunch on the mountain). Running the numbers, the $769 you plunk down for the pass on day one will pay for itself after just 6 days on the mountain — and there's not just one. 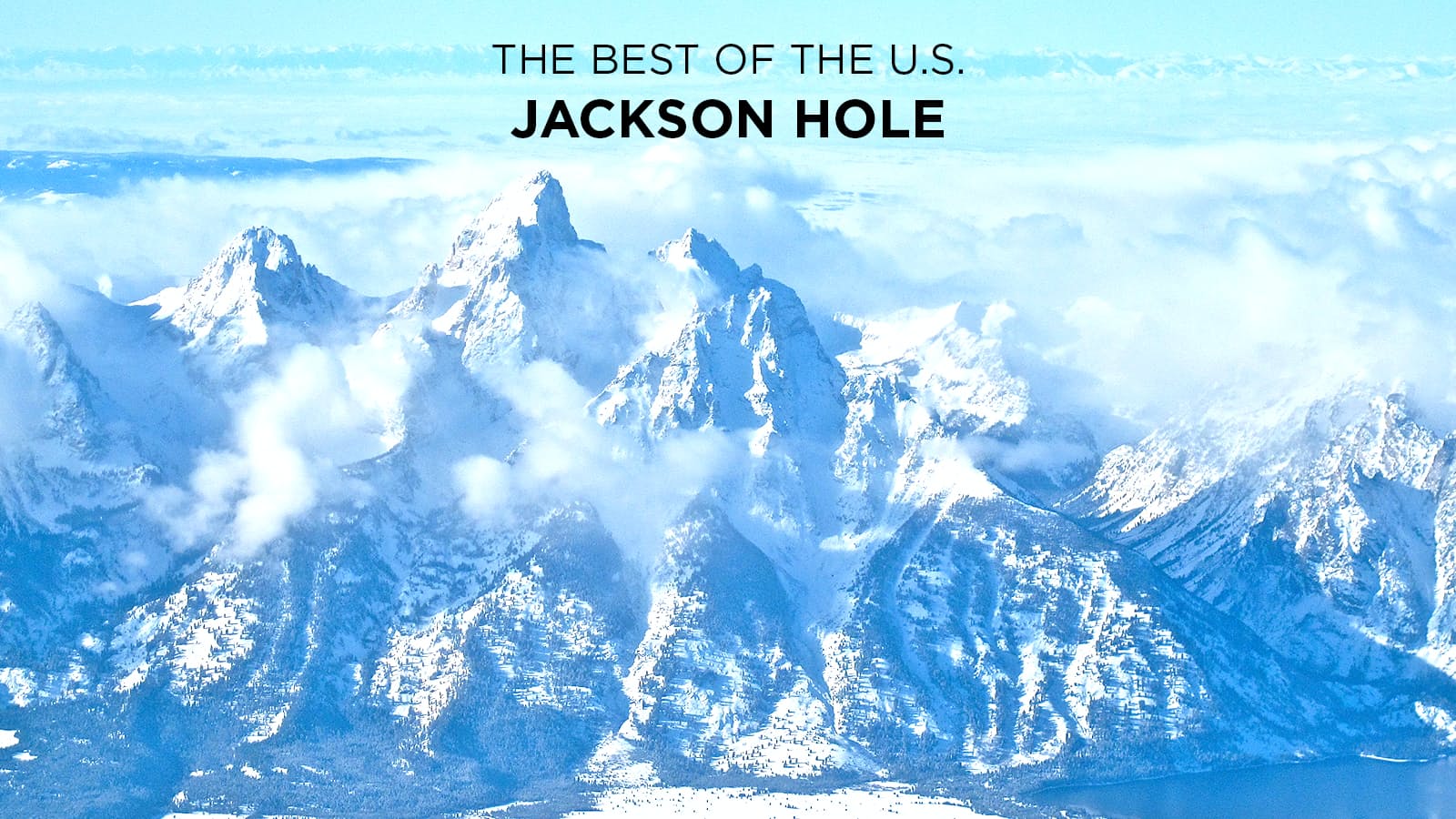 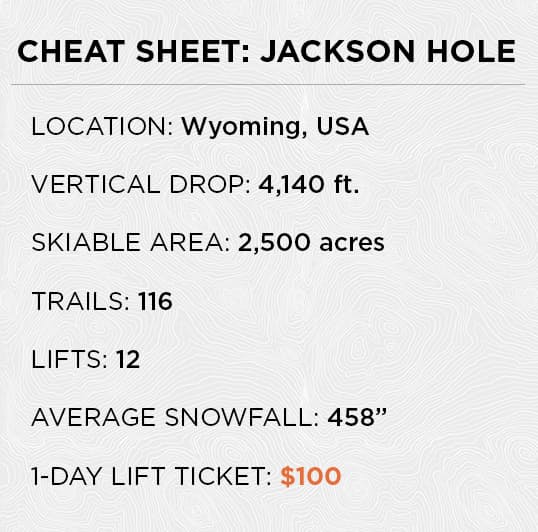 It's a somewhat bold claim, calling Jackson Hole the categorically best skiing available in the US (we're not entirely sure we believe it ourselves, in all honesty). Luckily, backing up our claim is none other than Forbes Magazine, which has ranked Jackson Hole as "the #1 Ski Area in the United States." One might say that Jackson Hole is great for a number of reasons, depending on who you ask. It might be the Four Seasons at the base of the hill. It might be the aerial tram, the epicness of which is only perhaps matched by the new peak-to-peak lift recently installed up a bit further north at Whistler-Blackcombe. For us, what makes Jackson Hole the best skiing in the good ol' U-S-and-A is the fact that its snowfall is nearly unmatched, and if you've got a taste for the steeper piste, there's simply no better place to go. The topography of Jackson Hole has created some of the most epically terrifying terrain known to two sticks, also known as "the Couloir." For the uninitiated, a Couloir is a steep, narrow gulch. The great thing about them? They often run out into picture-perfect, open bowls. The, err, tougher thing? They often involve dropping in — sometimes as far as 25-30 feet — into a shoot where turning your skis any direction other than straight down means you're going to become best friends (and worst enemies) with a rock face. But don't let that scare you — there's plenty of terrain at Jackson Hole for those without adrenaline disorders — so be sure to bring the kids along for this premier skiing. But just not on the hike up to Corbets Couloir. 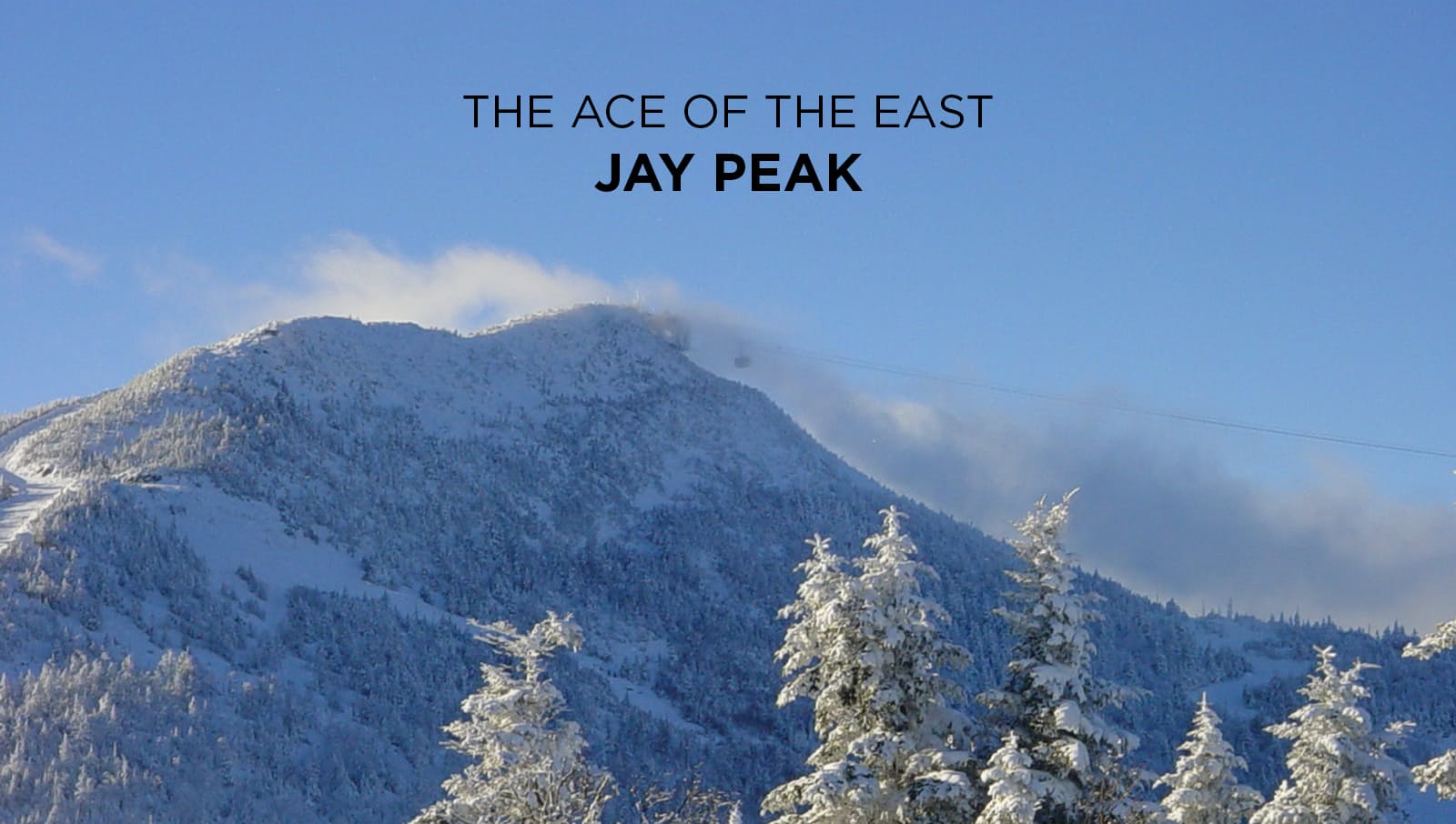 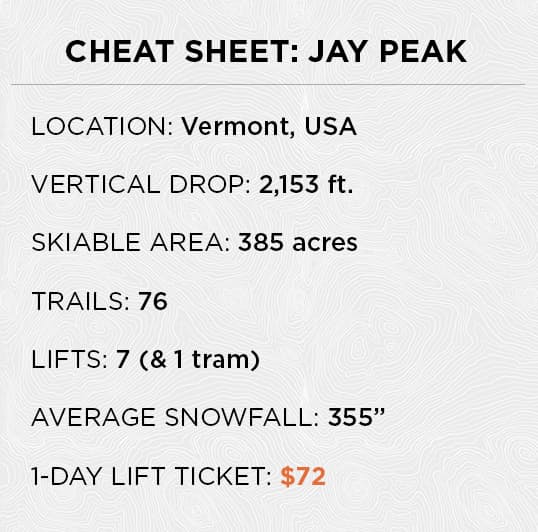 If you've been lucky enough to have skiied on both sides of the USA, it's hard to say that any one East Coast ski area can hold a candle to the size and snow quality you'll found out west (or up in the Great White North at the likes of Whistler). But we don't mean to sell East Coast skiing short, because if you look in the right places, you can find some fantastic runs, just a short ways (relatively) from Boston or New York City. We've chosen Vermont's Jay Peak resort as the place to be if you're looking to schralp the gnar out East. With by far and above the best snowfall you'll find on the East Coast (which is important on the sheer, usually ice-ridden runs that have always characterized skiing the East coast), Jay Peak will get you the best bang for your buck if you're a New Englander looking for some challenging terrain without shelling out for the likes of both a lift and a plane ticket to Jackson Hole or Vail.

Evan Williams is a Growth Associate at Huckberry in San Francisco.
You can usually find him telling puns, speaking in accents, and watching football (the European kind).
Follow him on Instagram.

Iceland in the Winter Off-Seaso...

Reflections from a Blue Lagoon...