In a city where there’s no shortage of options, we’ve rounded up our favorite hikes and the best brews to pair with them

When it comes to drinkin’ beer and gettin’ outside, few cities have acquired as distinct a reputation as Portland, Oregon. Completely surrounded by dense forests and equidistant from the beach and mountains, The City of Roses has almost too much to offer when it comes to playing outside (no surprise that our friends over at Danner have made the city their home since 1932). Then there’s the beer. Beer is something that Portlanders take seriously, having given rise to one of the Nation’s most vibrant craft beer scenes and earning the city one of its numerous nicknames—Beervana. Per capita, Portland is home to more brewpubs than any other city in the US and even the diviest of dives tend to offer eclectic tap lists full of beers that you didn’t even realize you wanted to try.

While many have found their way to Portland because of its quirky nature and laid-back attitude, the truth is that Stumptown is a perfect destination for anyone who enjoys eating, drinking, or going outside. Old growth forests? Check. 620-foot waterfalls? Duh. Coastal vistas that will bring you to tears? Obviously.  Whether within the city limits or a short drive away, a visit to Portland provides access to a myriad of options for you to get your trail fix. Here are some of our favorite trails along with a few places to find the perfect beer pairing.

(For more Trails and Ales, we’ve also got you covered in San Francisco, New York City, Santa Fe, and Austin.)

How to get there from downtown: #15 Bus to NW Thurman & Gordon with a 10-minute walk; 10-minute drive

Forest Park is 5,200 acres of pure Pacific Northwest forest located in the hills above Downtown Portland.  Boasting some 80 miles of trails, over 160 species of animals, and at times reminiscent of something Jurassic—it’s about as wild as an urban park can get. The park offers a seemingly endless selection of trails that can be used to choose your own adventure. Whether you’re looking for a quick one or two-mile walk before brunch or a 27-mile jaunt on the Wildwood, the park can easily accommodate your needs and does so just 10 to 20 minutes from most parts of the city. The Lower Macleay to Pittock Mansion hike is a local favorite and features old growth Douglas Firs (Portland’s oldest tree) and the actual best view of Portland from above.

After your hike, head on over to Skyline Tavern—a local favorite tucked away in the west hills. The woodsy watering hole feels like anything but an inner-city bar, making it especially inviting after a long hike. With 10 taps of mostly local beer and a painfully charming outdoor space, it isn’t hard to see why Portlanders and visitors alike have been frequenting the Tavern for almost 100 years. If you’re still not convinced, the ping-pong table, live music, and community grill should just about do it.

How to get there from downtown: Starts downtown

The 4T trail (trail, trolley, train, tram) is an interesting take on urban hiking and is a great way to spend a day exploring Portland on foot. The trail starts downtown where you board the Max Train headed for The Oregon Zoo. A $5 day pass works for both the train and the trolley, so be sure to grab one. If zoos are your thing, be sure to check this one out—it’s the oldest zoo west of The Mississippi and is involved in many great conservation initiatives. From the zoo hike on The Marquam Trail towards Council Crest Park, the highest point in Portland. Next, a hike through Marquam Nature Park will bring you to the OHSU campus and the Portland Aerial Tram. The tram is free to use going downhill and will bring you down to the Willamette River, providing panoramic views of Portland all along the way. Once you arrive, board the streetcar and take it back to downtown Portland, finishing the loop. An alternative route starting at the Marquam Nature Park Trailhead offers 4.4 miles of hiking and free parking if you happen to have a car.

Once you’re done wandering around PDX, Kelly’s Olympian is a great place to grab a drink.  Having opened its doors in 1902, the downtown relic is the third oldest bar in Portland and has been a staunch fixture the entire time. Neon signage and vintage motorcycles hanging from the ceiling imbue the dive with an ambiance akin to that of a watering hole you might find attached to a truck stop in some remote desert town along Route 66. Do yourself a favor and grab some mac and cheese balls or an order of wings, thank us later.

How to get there from downtown: 30-minute drive

Oregon has countless waterfalls but, at 620 feet high, Multnomah Falls is the state’s tallest and most iconic. The subject of many a postcard, the Benson Bridge spans the lowest part of the falls and looks like something straight out of Lord of the Rings. Like most areas in this part of Oregon, the falls are accessible year-round though offer dramatically different experiences depending on the season. In the spring and summer, the lush and misty greenery is nothing short of magic. In the winter months, the area around the falls freezes—giving life to a winter wonderland that is especially enjoyable with hot cocoa in hand. The historic Multnomah Falls Lodge, completed in 1925, is a great place to grab a meal (or the aforementioned hot cocoa) and also houses a gift shop. A 5-mile loop begins at the Lodge and takes you up and around the Falls, providing several different perspectives from a variety of viewpoints along the way. From there, the trail takes you to nearby Wahkeena Falls and several other waterfalls before looping back around and ending back at the lodge. The trail was impacted by the 2017 Eagle Creek Fire, so make sure to check trail conditions before heading out and have a map with you.

On the way back into Portland, stop by McMenamins Edgefield in Troutdale for a beer. Opened by the McMenamin brothers in 1990, Edgefield is an establishment unlike any other. Encompassing some 74 acres of land on what used to be the county poor farm, the estate offers a variety of activities. The centerpiece of the estate, The Main Lodge, offers accommodations from family suites to hostel beds. Scattered around the property, you’ll find several bars and restaurants as well as a brewery, winery, and distillery. The Little Red Shed is a particularly adorable place to grab a beer on the premises, and we don’t use that word often, so you’re going to have to trust us on it. 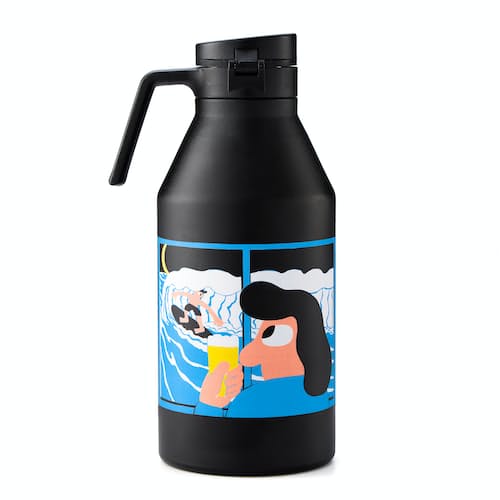 How to get there from downtown: 90-minute drive

When you arrive at Trillium Lake, you’ll be greeted by one of the most magnificent views of Mount Hood you can find. Located just 7.5 miles from the mountain, the man-made lake often perfectly reflects the peak—about as idyllic a photo op as the Pacific Northwest has to offer. In the summer you’ll find the lake populated by boaters and fisherman who insist they’ve been fishing the lake their entire life and have the stories to prove it. An easy two-mile loop around the lake provides several different views of the mountain along with a few amazing fishing spots, if that’s your jam.

On your way back to Portland, stop by Timberline Lodge for a beer, meal, and maybe even a nap. Sitting at 6,000 feet, as far up on Mount Hood as you can get without climbing it, the historic lodge is an absolutely stunning building. Built by President Roosevelt’s WPA during the great depression, the building was built using massive timber and locally sourced boulder. The 92-foot chimney stack—smack dab in the center of the main building—has six fireplaces on two levels and might possibly be the coziest thing we’ve ever seen. They simply don’t make buildings like this anymore and it is 100% worth a visit. There are several dining options at the lodge but our favorite is the Ram’s Head Bar & Restaurant. With a great food menu, a selection of Mt. Hood Brewing Co. microbrews, and an extensive cocktail menu, The Ram’s Head is a phenomenal place to end the day. The Apres Ski Drink menu is full of hot beverages that could possibly change your life because—let’s face it—a fanciful adult hot cocoa just tastes better on top of a snow-capped mountain. If you can swing it, grab a table by the south-facing window, one of the best places in Oregon to watch the sunset.

How to get there from downtown: 100-minute drive

The most distant hike on our list is on the coast because no trip to Oregon is complete without laying eyes on the Pacific. Neahkahnie Mountain isn’t the tallest peak on the coast but it offers some incredible views and several options for summiting it. Hiking up from the North Trailhead offers a longer hike, supposedly 5.5 miles (though we clocked it at closer to six), with a steady climb. The southern route is shorter and easier, at only three miles. You can also make a loop of both trails, starting at the north trailhead and continuing to southern one (or vice versa).  If you choose this option, a one-mile walk along highway 101 will bring you back to your car. Pack a lunch and enjoy the view from the top, on a clear day the coast seems endless.

On your way back up the coast (towards PDX) stop by Pelican Brewing Company in Cannon Beach. The Brewpub is one of several coastal outposts for the Pacific City-based brewers. With 20 taps of year-round and seasonal brews inspired by and meant to be enjoyed on the beach, Pelican is a fantastic place to end a day of coastal endeavors. Their seasonal food menu offers a variety of pub grub along with some phenomenal seafood, including a clam chowder that could potentially be too good. If you haven’t stopped by Haystack Rock at this point, it might be a good time to get your goonies on and pay a visit to the most iconic rock on the Oregon Coast before heading back to the city.

>>Next: Trails and Ales: San Francisco

Why You Should Wear Hemp...

Meet the Former Pro Surfer Who’...