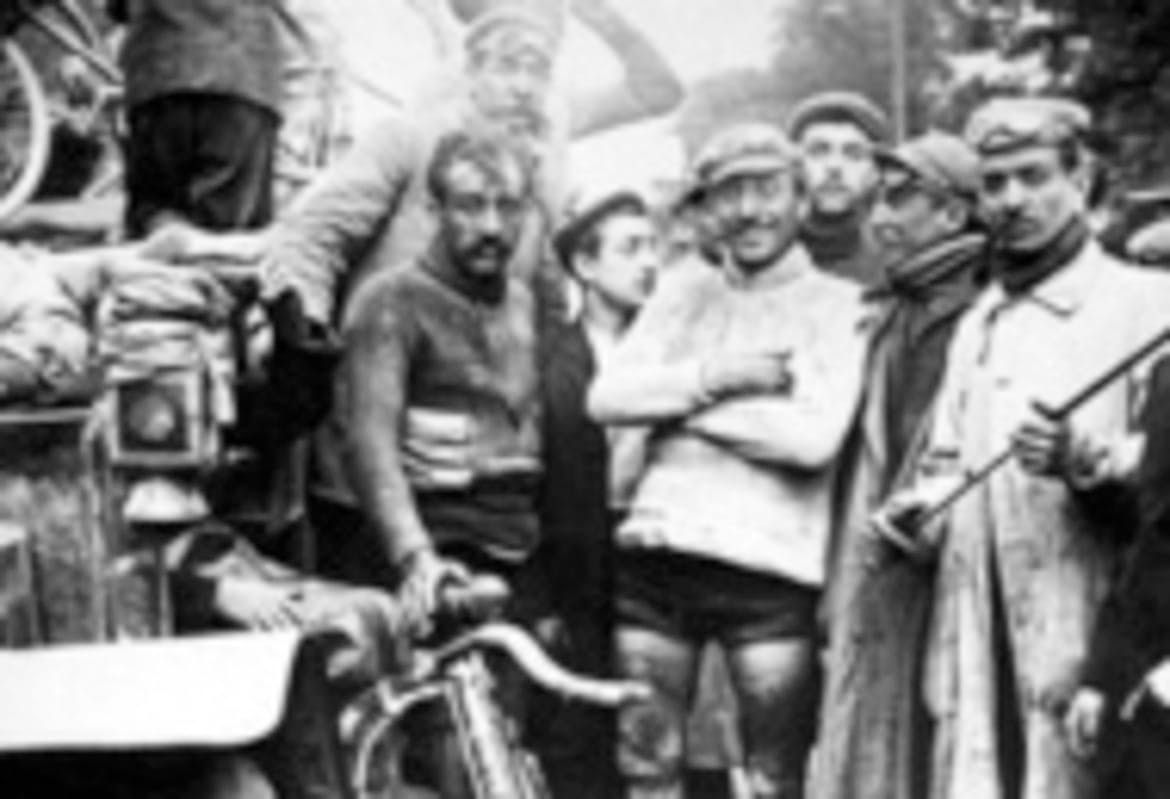 Maurice Garin won the very first Tour de France in 1903. The next year, he won the Tour’s second running. After that race was decided and the dust had settled, the French cycling union stripped him of his title as a result of one of the most mysterious & ridiculous allegations of cheating in modern sports. To win the 1904 Tour de France, Maurice Garin took the train.

If soccer is a gentlemen’s game played by hooligans, professional cycling is a rolling circus performed by fully-grown Artful Dodgers. It seems like not a year can pass in this sport without its contemporary heroes being accused or convicted of unscrupulous behavior -- recent memory of blood-doping scandals drags up names like Ullrich, Basso, Landis, and even Armstrong, but there are countless others throughout the past century and a half. For a sport so deeply European & dignified in its culture, cycling’s competitive side has a tendency to its moral compass askew. Was it always like this? Oh hell yes.

It’s 1903. Europe basks in a period of relatively uninterrupted peace. The First World War isn’t even a glimmer in Gavrilo Princip’s eye, and in France, the conflict of the day is between daily sports newspapers, not tank divisions. To raise its profile and garner readership from the more-popular Le Velo, rival paper L’Auto conceives a bicycle race spanning 19 days and all of France. Though the initial field is sparse (professional cycling is still in its infancy, after all), L’Auto editors lure 60 mostly-French riders to enter the first Tour de France by dropping the registration fee and promising 3000 franc grand prize.

Garin, an Italian expat by way of Reims & Belgium, has already won the Paris-Roubaix twice (itself commissioned by Le Velo), as well as several other then-major races. In 1893 at a 24hr distance race at Paris’ Champ de Mars, he beats the runner-up by 71km, purportedly fueling himself on quarts of red wine, oysters, and a mixture of coffee & Champagne.

He is the favorite in the inaugural Tour de France, and he wins easily after springing to an early lead on the first stage and averaging 25km/h over the next five. In 1904, though, the race isn’t all sunshine and roses for Garin. He supposedly says, “I'll win... provided I'm not murdered before we get to Paris”, which turns out to be not much of an exaggeration. This year’s Tour is rife with all the chicanery, sabotage, and subterfuge of a Shakespearean play. As the defending champion, Garin is the target of much of this unwanted attention. He’s swarmed by mobs of his rivals’ fans at several points. One incident gets so severe that authorities can only disband the crowds by firing pistol shots.

In another, he’s hit in the face with a rock. Along the route, riders sprinkle tacks & broke bottles to puncture their opponents’ tires. Factions fell trees across steep climbs to help their favorite and delay the peloton. Many penalties are assessed to cyclists for riding behind -- and sometimes, even inside -- team cars. One year into its existence, the race that will come to define cycling has already given way to the sport’s baser instincts.

All of which serves as some explanation for why Garin, 1904’s favorite (and eventual winner), decides to make things a little easier on himself. This 2428km race is rough enough as it is. A reigning victor shouldn’t be forced to slug it out in the trenches every step of the way, right? His transgressions -- those that are witnessed -- are minor. At one point, he accepts food from a race official during a period in which eating is prohibited. He also apparently drinks quite a bit of wine while riding, though cycling author Les Woodland points out that this practice, like cheating to enhance one’s standings, is widespread in racing at this time.

But Garin’s Tour legacy will always be the trick that no one can ever prove he turns. To bypass a particularly strenuous section of one of the race’s six stages, he pulls off at an out-of-the-way train station (this is before television or attendance numbers that would make such a move impossible), loads his cycle onto a locomotive, and deboards it at some indeterminate station in close proximity to the stage’s end. Inundated with complaints from spectators and other riders, the race officials launch an investigation on the top four finishers.

Without releasing the findings of its probe, the union strips them all of their titles and hands each a suspension. Some are for life. Garin receives a two-year suspension, which is effectively the end of the line for “The Little Chimney-Sweep”. He retires to Lens, where a velodrome is build in his honor. He finishes out his life tending an auto garage he buys with his cycling winnings.

So what actually happened in the second Tour de France there ever was?

Throughout his life, Garin made tongue-in-cheek acknowledgements that he may have cut a few corners in the 1904 Tour, but never outright admitted to riding a train. And unfortunately, no official documentation of the 1904 investigation remains. Europe erupted in World War I just a few years later, and in the turmoil of the WWII, the French cycling union’s files were packed into a van fleeing south from the invading Nazis. The archives were never seen again.

But if you thought this story couldn’t get any more Romantic, you’re gloriously wrong. Someone was sitting on the truth, and a truth this good just has to get out. Maurice Vernalde was a small boy living in Lens when Garin retired there. Years later Woodland found him, still in Lens, working as -- seriously -- a gravedigger. Vernalde told Woodland that towards the end of Garin’s life, when it no longer really seemed to matter, he’d openly cop to jumping that train with his bike to win the 1904 Tour.

So if you tune in to watch Cadel Evans try to defend his title in the 2012 Tour, and the subtext of blood-doping looms behind each broadcast, remember the Tour de France’s original larger-than-life defending champion. Maurice Garin never doped, but he drank wine like it was water, and beat the peloton to Paris on a train.

Les Woodland’s editorial on tracking down Maurice Vernalde is a must-read. Wikipedia was also a fascinating rabbit hole to get lost down while researching this article. Check out Maurice Garin and the 1903 & 1904 Tour de France, then get all contemporary and read up on Operacion Puerto, one of the biggest doping sting operations in cycling history. Enjoy Le Tour.