Just in time for peach season, the folks at Outerlands show us how to make the perfect open-faced sandwich. Extra burrata included

n cool grey mornings in San Francisco's Outer Sunset neighborhood, Outerlands is a warm oasis from the fog coming in off the Pacific just blocks away. The restaurant's far-western location in the city means that it's not as packed as it would otherwise be (even though the weekend brunch lines still wrap around the block), so stopping by on a weekday means you can get breakfast without even having to wait for a table.

Which is exactly what we're here for — well, breakfast in the form of Chef Brooke Mosley's open-faced peach and burrata sandwich. But we're getting ahead of ourselves. 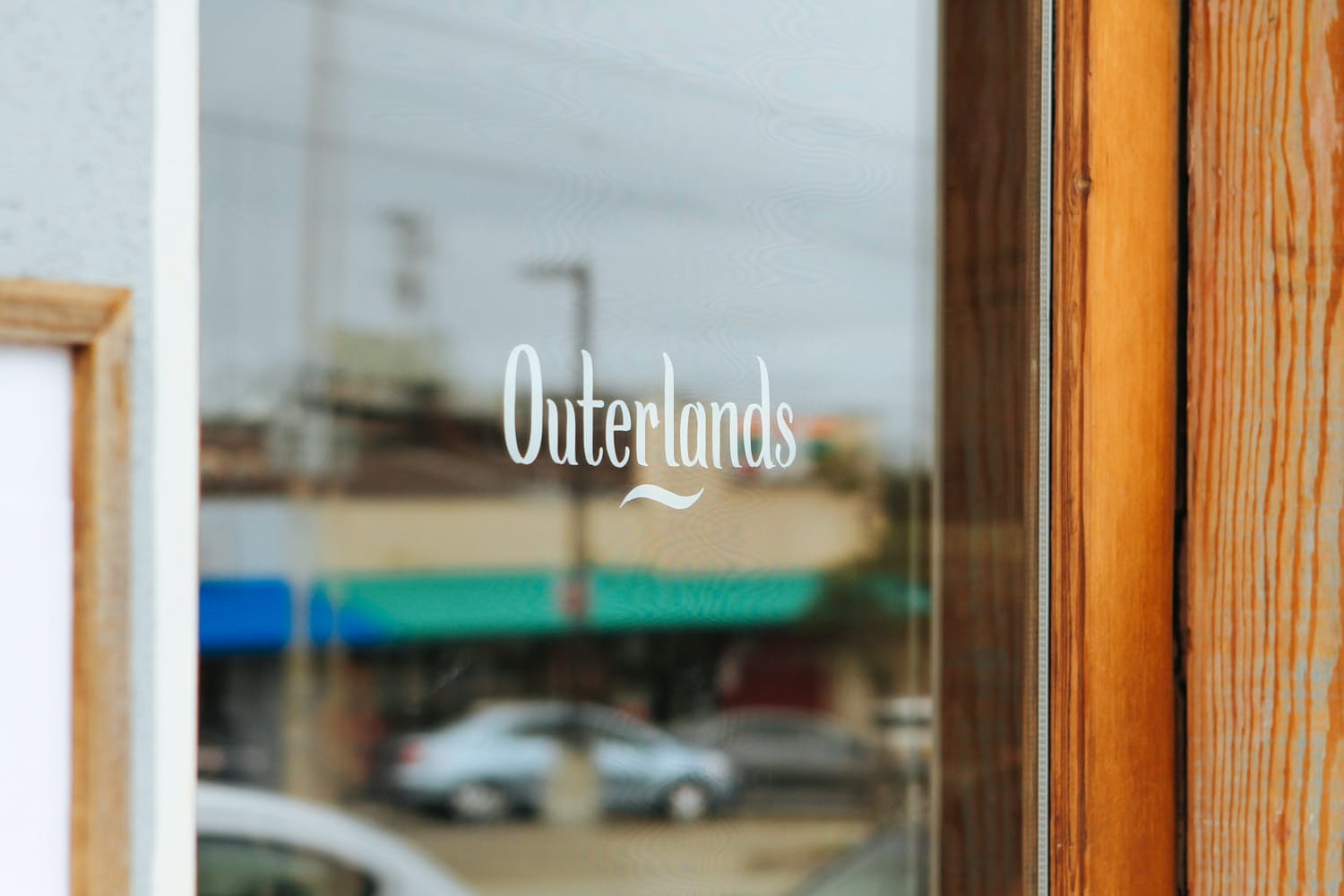 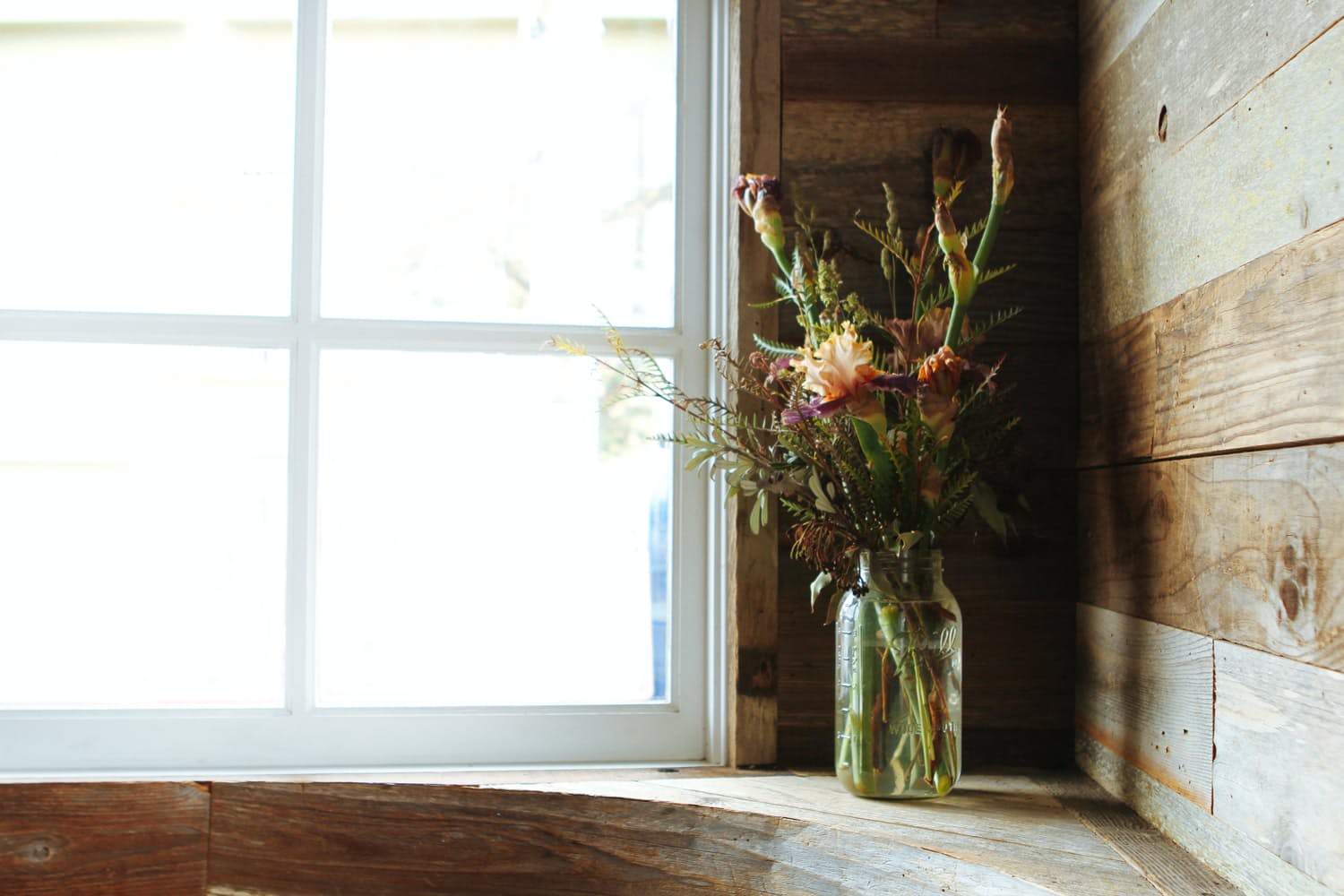 When Outerlands owners Dave Muller and Lana Porcello moved to this area about a decade ago, there wasn't much around in the way of food, so the couple found themselves cooking for their friends a lot (a group that included our buddy Jay Nelson). The solution presented itself.

"We'd been in the food world for about 15 years at that point, so when we saw this need we decided to open something," said Dave. "We'd thought that Outerlands would be more of a soup-and-salad, hole-in-the-wall kind of place, but the response to it was really overwhelming. So we've just tried to grow with it as the concept evolved, to listen to what was being asked of us. We know a lot of people who cook way more technically than we do, so we like to focus on the the vibe and community. We're trying to keep it humble and homey." 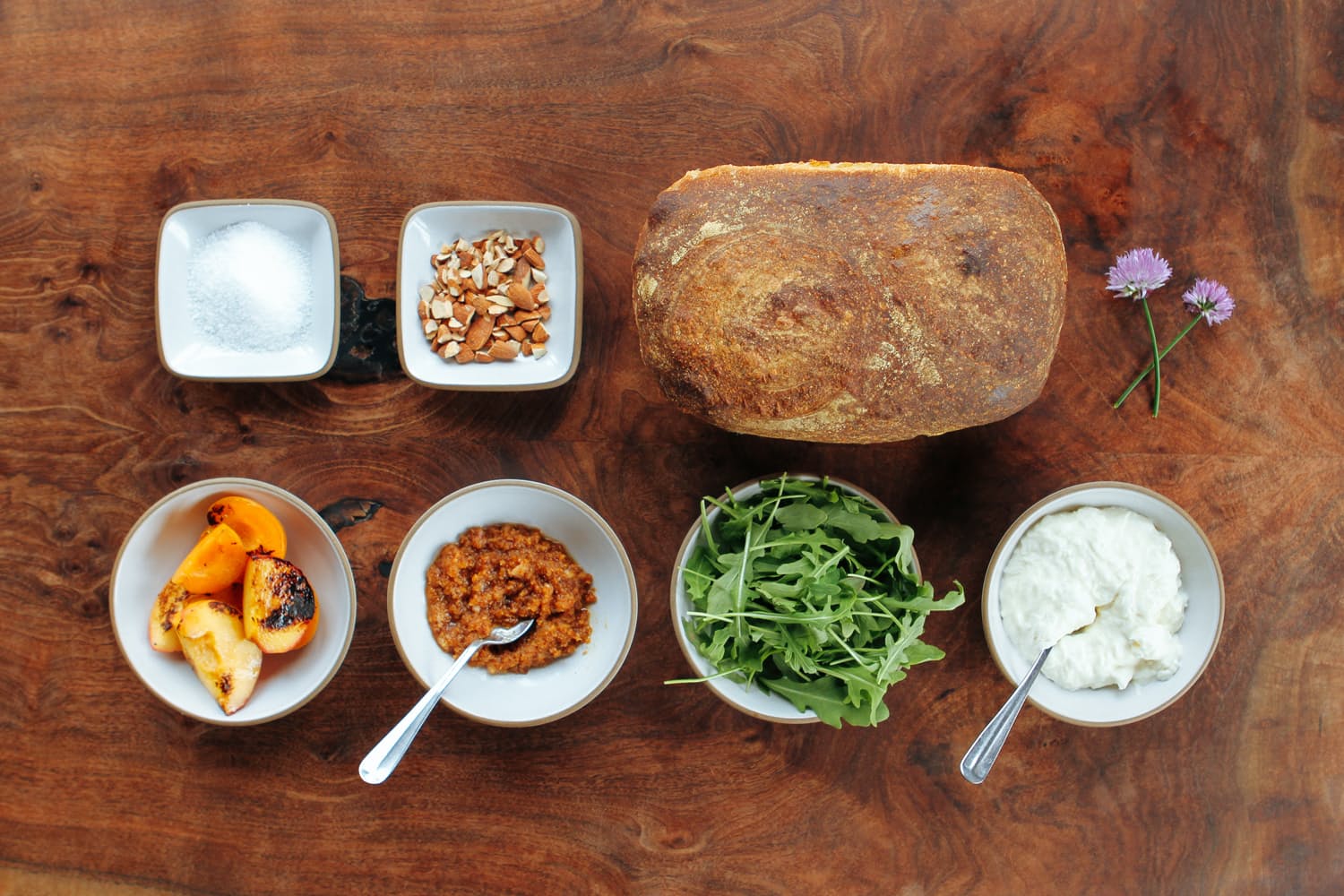 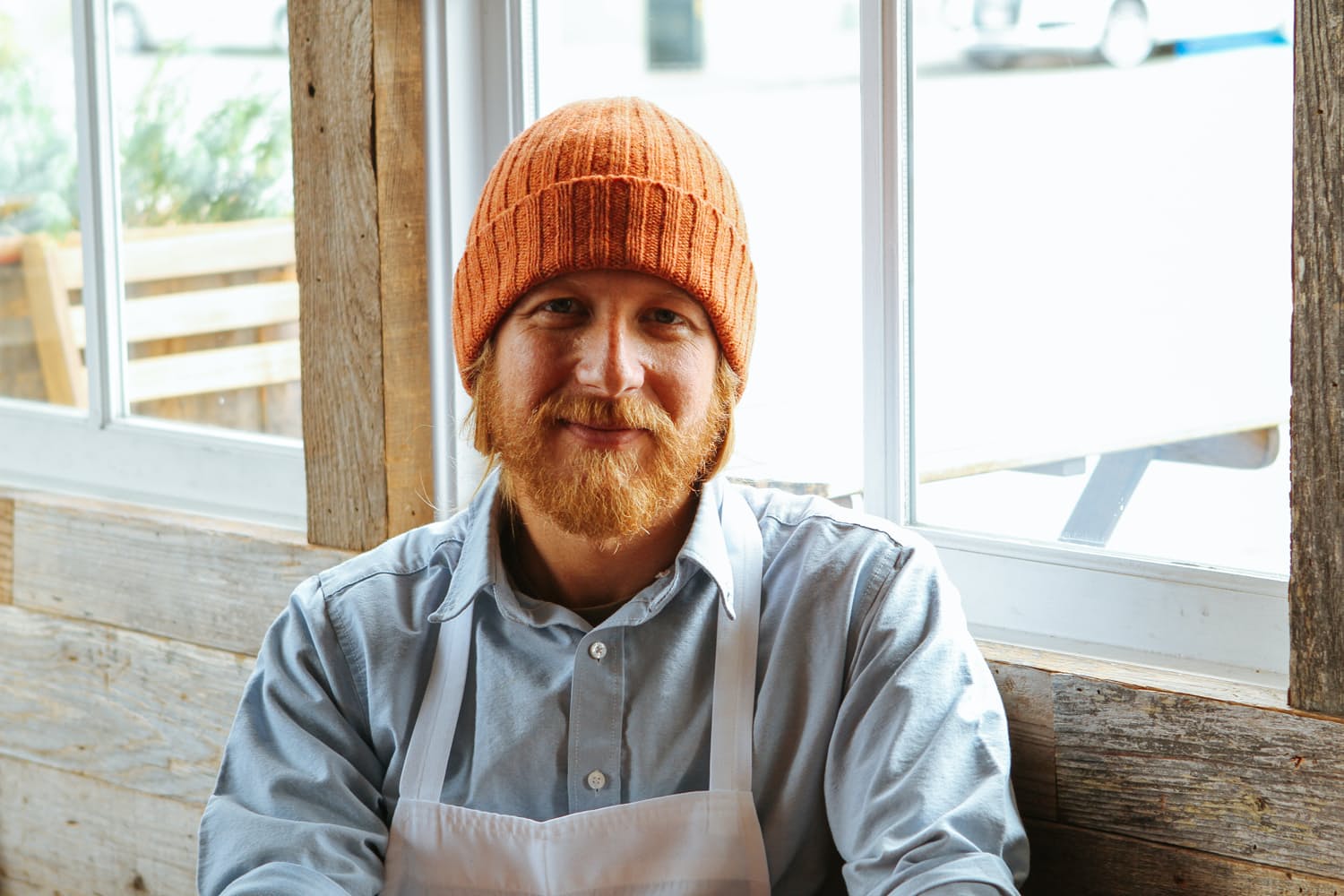 Which they could make sure of after Outerland's recent expansion and renovation. These days, the place is filled with air plants and flowers, the reclaimed wood walls mimic the curves and waves of the ocean, and the Pacific-tinged light streams in through the tall front windows. Jay built the wood light fixtures in his nearby studio. Heath Ceramics made the plates, bowls, and mugs.

Vibes? Oh, they've got vibes, all right. What Dave and Lana had imagined as a hole in the wall is now the central hub of the Outer Sunset. 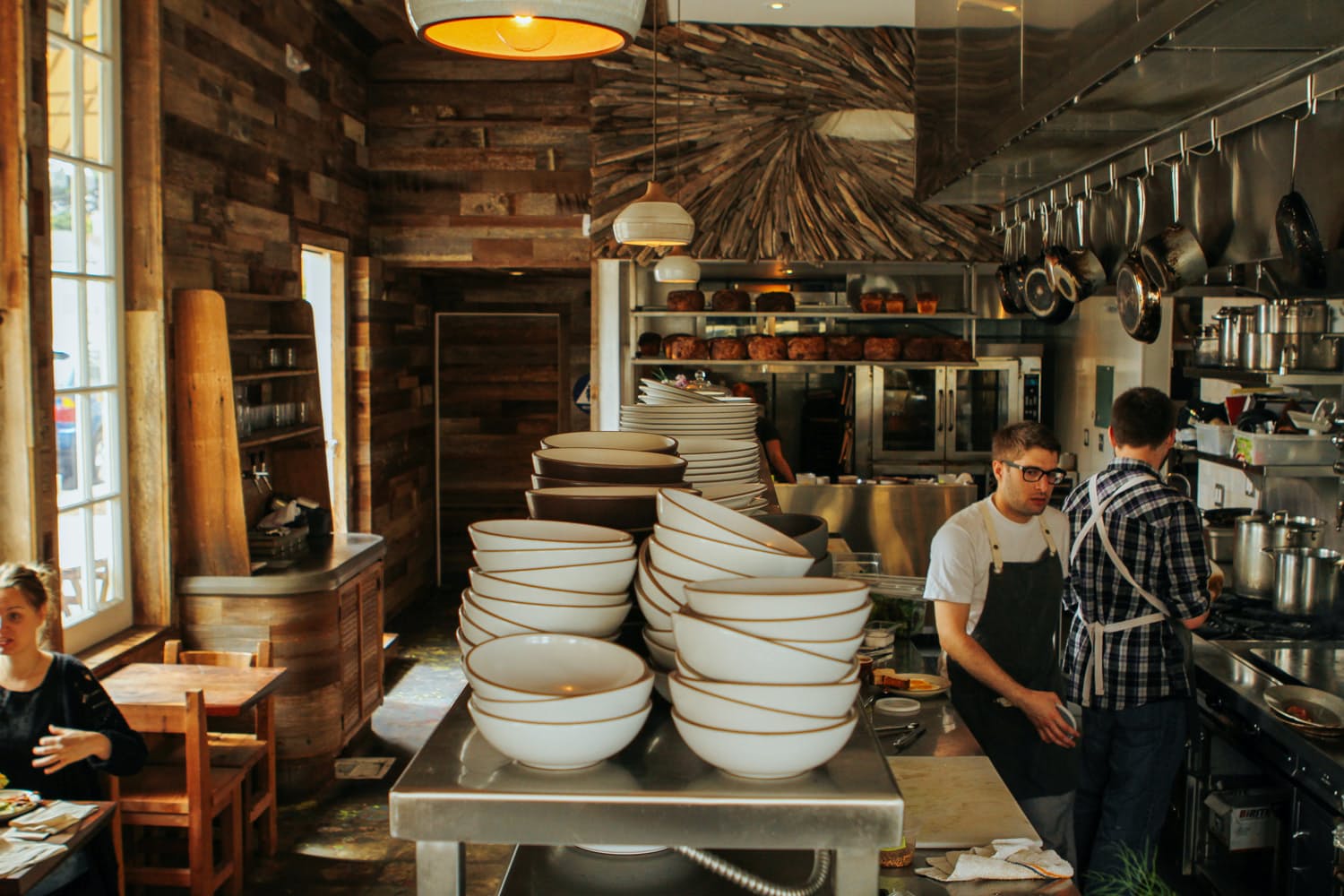 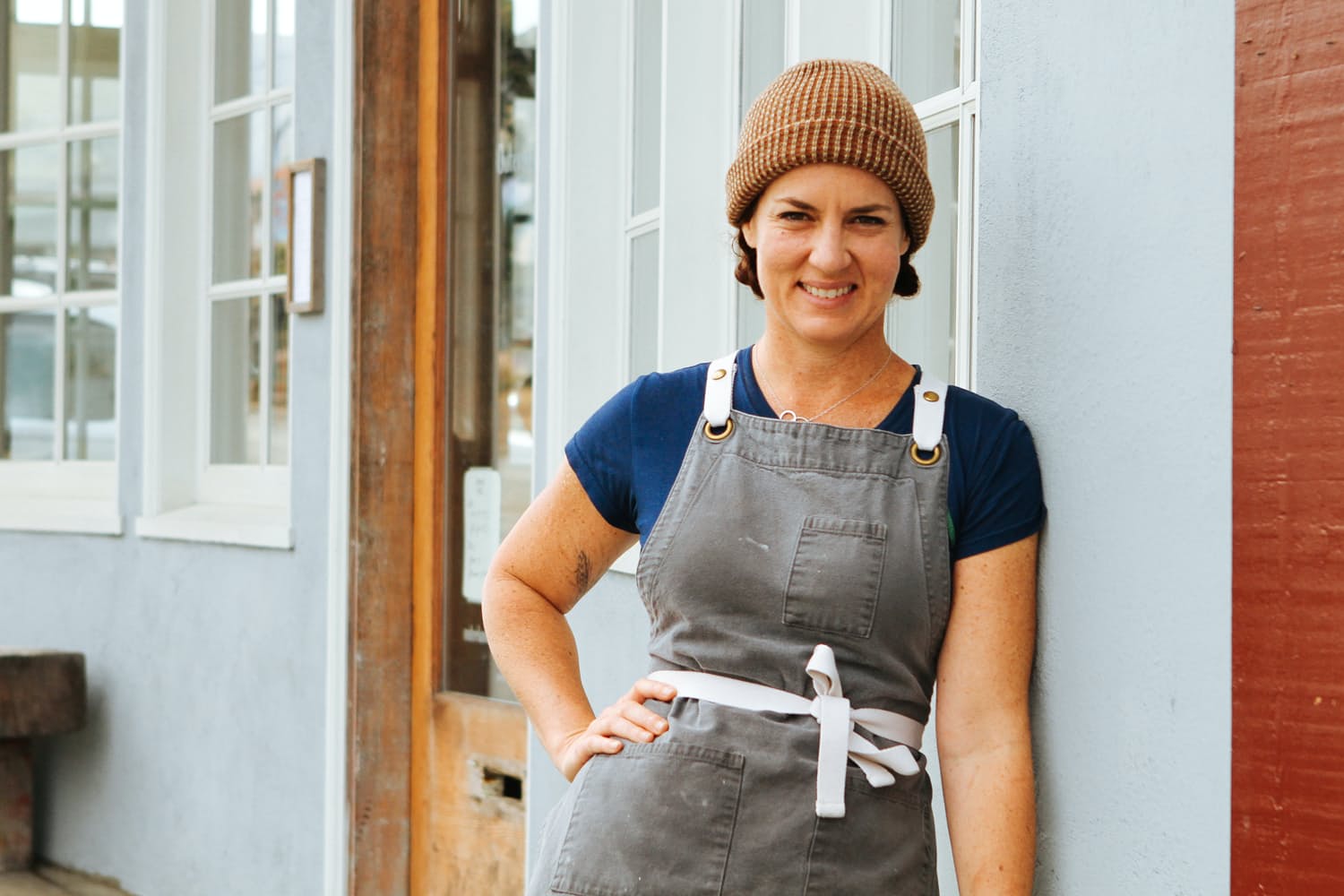 That's what caught the eye of Chef Brooke, a San Diego native who was reminded of the funky beach towns of her childhood when she visited the Outer Sunset for the first time. Before she came to Outerlands a little more than a year ago, Brooke had only ever cooked in Los Angeles and had recently left a few jobs, feeling burnt out and in need of some time to recharge. Serenpity put her in touch with the previous chef at Outerlands, and before she knew it she was the resident pastry chef. These days, she's their head chef, bringing in people from all over the country with her incredible seasonal menus.

Which brings us back to the perfect open-faced sandwich, topped with peaches, arugula, and burrata — which, for the uninitiated, is mozzarella that has been injected with cream. (Yes, you read that right. Dreams do come true.) 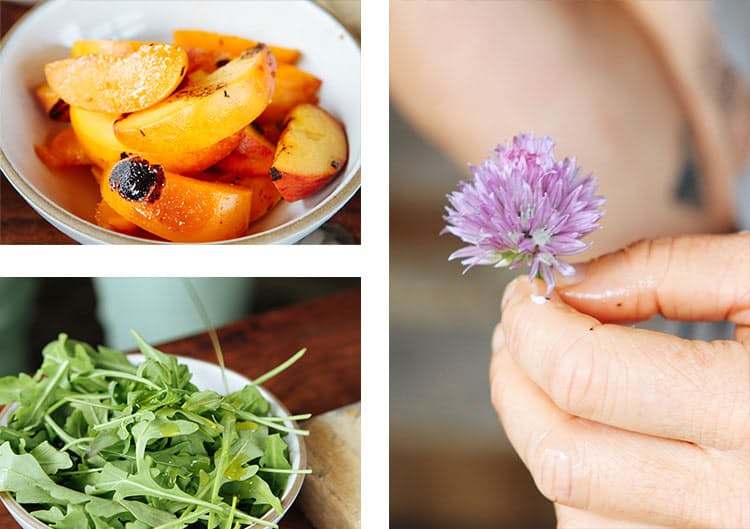 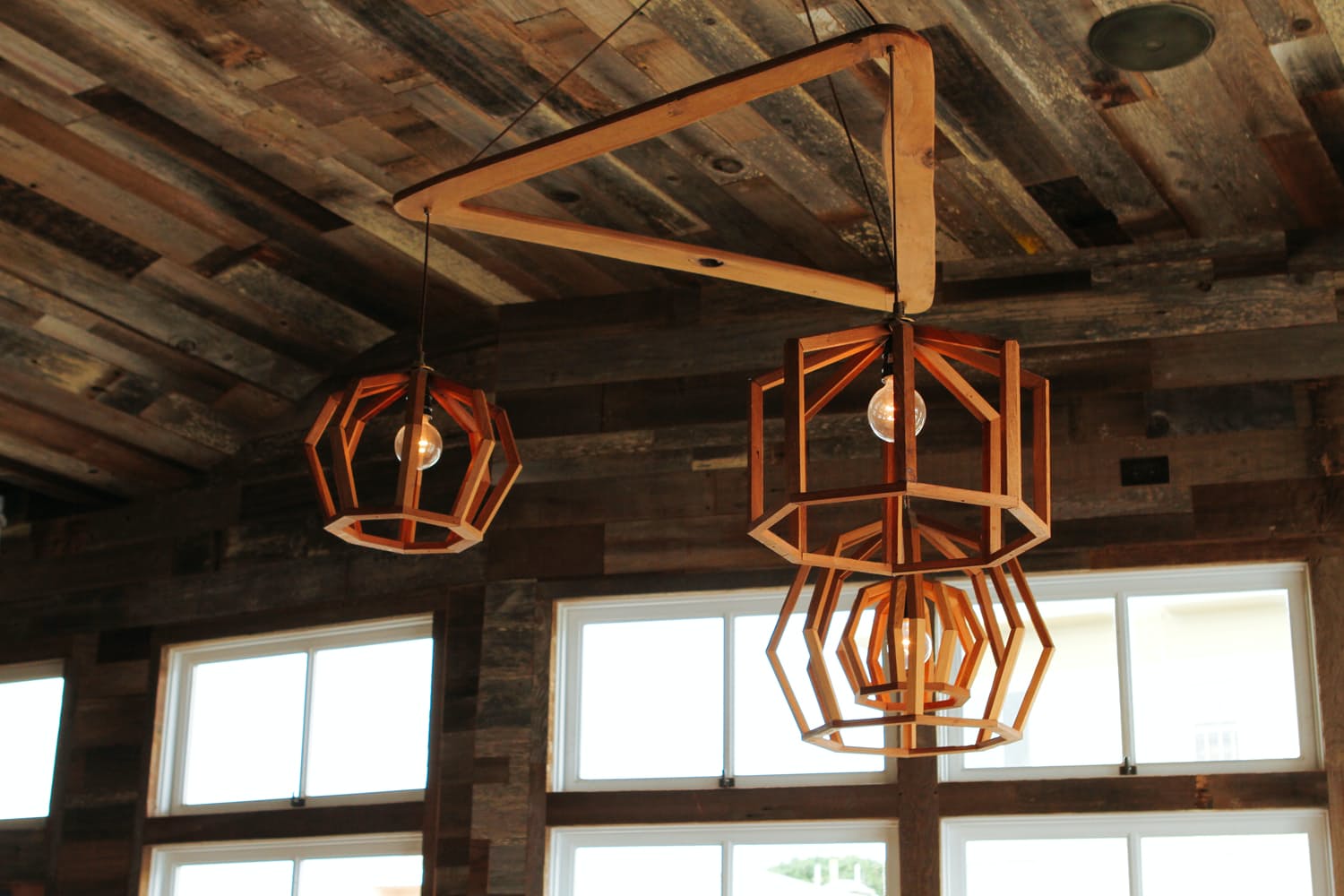 "For me, putting these ingredients together seems like an obvious thing to do," said Brooke. [Editor's note: peaches and burrata on a fried chicken sandwich is Brooke's number one jam. But we don't want to leave vegetarians out of the fun.] A lot of people aren't eating peach and burrata sandwiches at home, but a lot of people could be."

So grab your favorite stone fruit, sear it on the grill to bring out the flavors, and pick up some creamy burrata and a handful of arugula. With a sprinkling of sea salt, a spoonful of savory almond purée, and a dash of olive oil, you can pile it onto a thick slice of still-warm levain bread and have it for any meal of the day. Eat it with a knife, fork, or hands. We won't judge. [H] 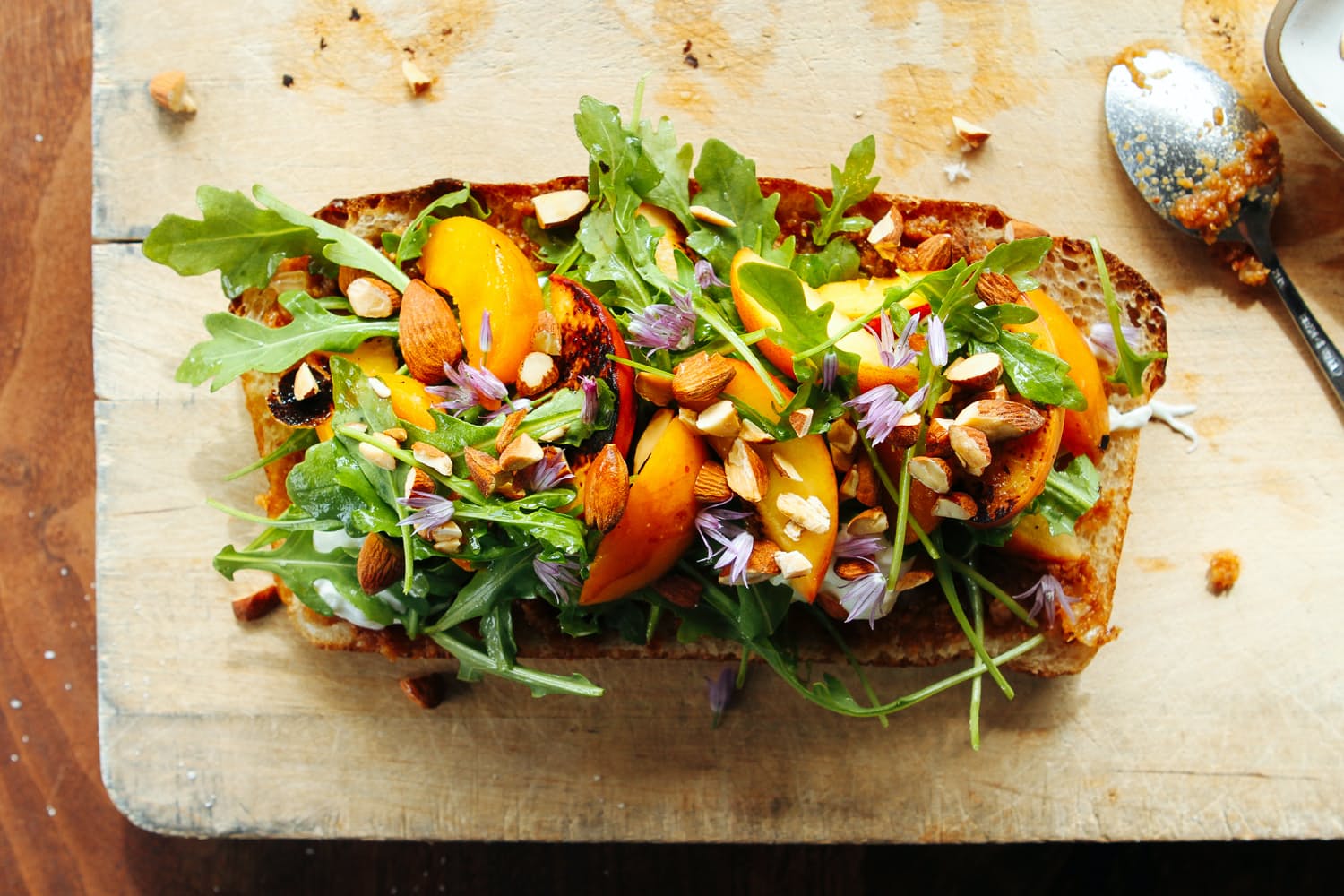 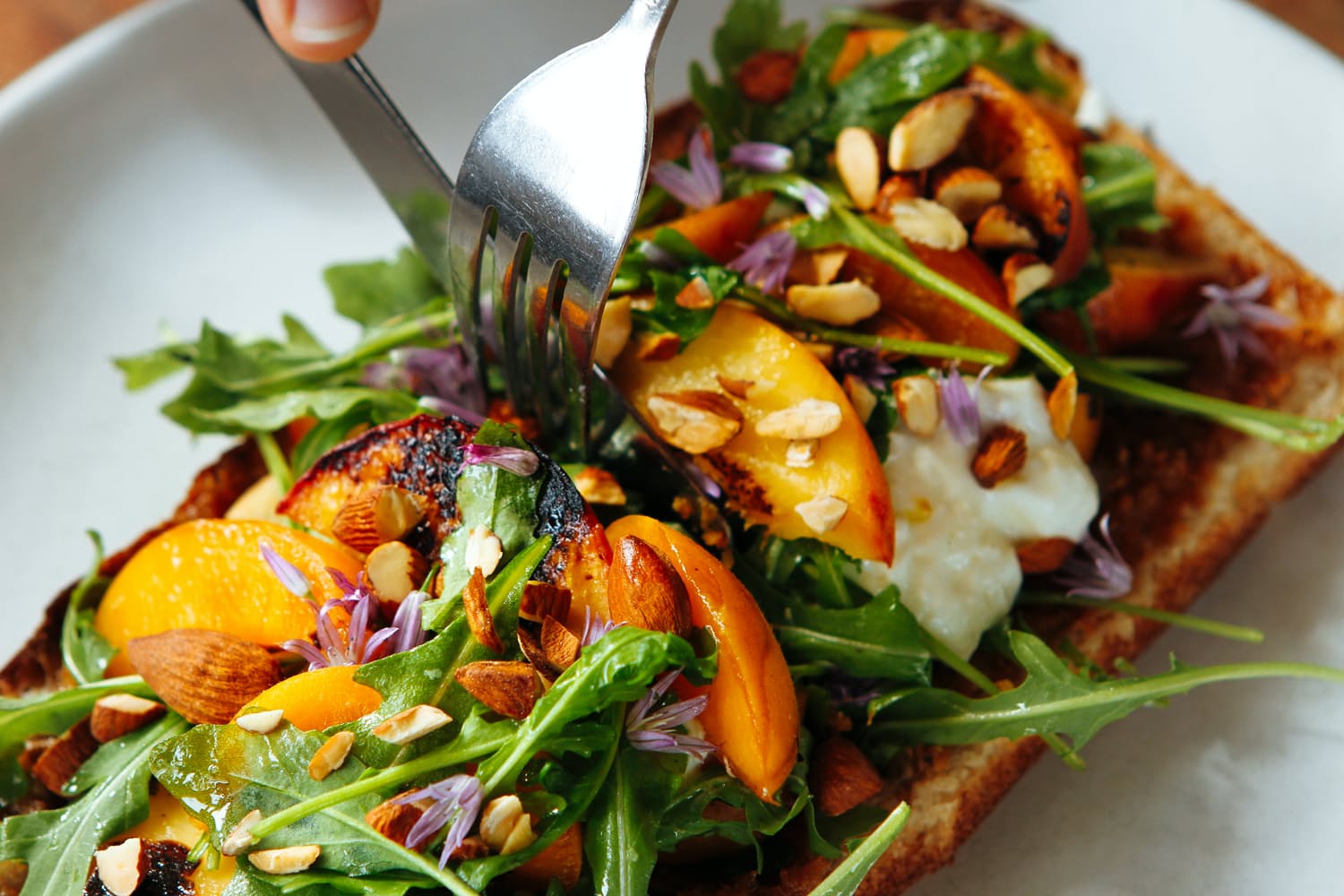 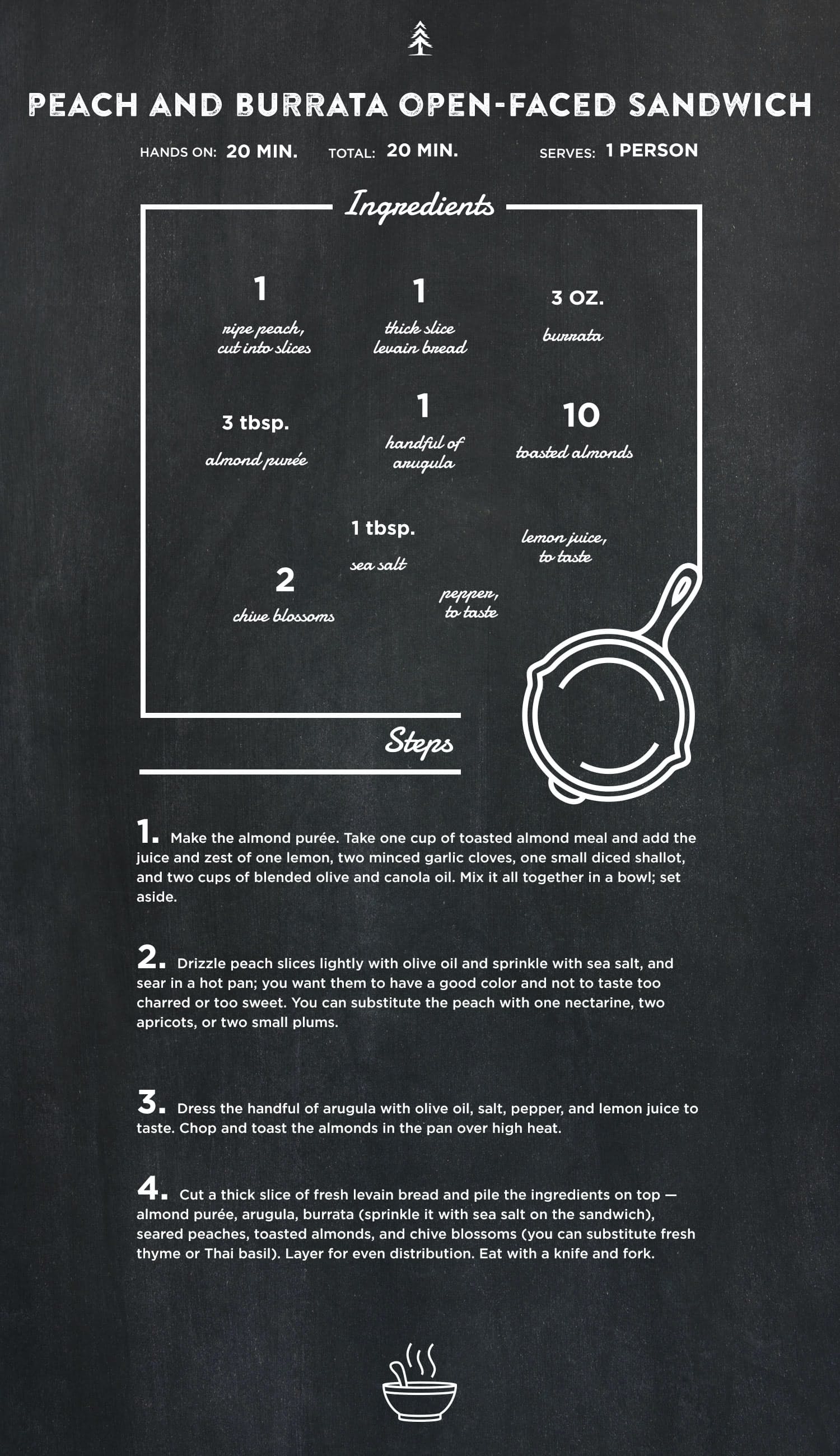 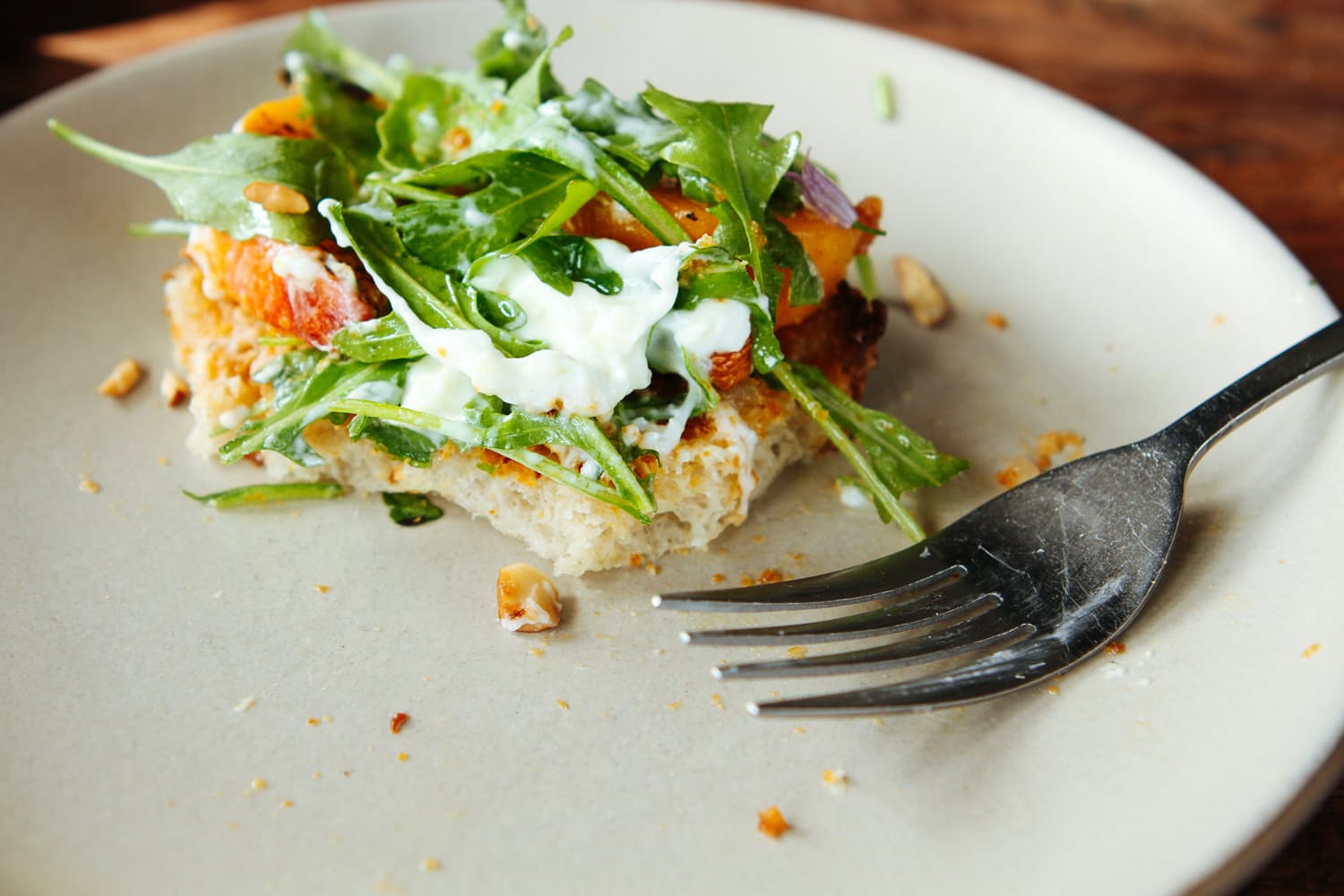