The Obstacle Is the Way: an Interview with Author Ryan Holiday

The book on ancient philosophy that's taking the NFL by storm

In the spirit of self-improvement in the new year, we sat down with media strategist and bestselling author Ryan Holiday to discuss his newest book The Obstacle Is the Way. A quick bedside table read, Obstacle lays out a timeless art for "turning trials into triumph," one that NFL players and coaches are seriously studying and using on the field. Equal parts mindset, gut-check, and practical exercise, Obstacle is packed with historical examples of men and women that embodied various aspects of this art — which has its roots tracing back more than 2,000 years to a Roman Emperor’s private journal...

Why do you think The Obstacle Is the Way has become
so popular amongst NFL players and coaches?

Ryan Holiday: Well, I never thought, "this will be the perfect book for the winner and loser of last year’s Superbowl." That was a surprise. But I think anyone in a leadership position or working creatively on a daily basis to solve problems can find applications of philosophy, especially Stoicism. It makes a lot of sense for athletes because they’re in an extremely competitive context. Many are equal in physical talent, but what separates them is their ability to mentally focus. Philosophy is just as well suited to sports as to anything else. Marcus Aurelius has this quote: “No role is so well suited to philosophy as the one you happen to be in right now.”

"[Reading Meditations] was what Tyler Cowen would call a 'quake book,' a book that shakes everything that I thought I knew about the world."

How did you first encounter Stoicism?

RH: I was writing for my college’s newspaper and got invited to attend a small summit in Hollywood hosted by Dr. Drew Pinsky, the long-time host of Loveline. Huge fan — I grew up listening to it every day. At the summit, I asked him if he had any book recommendations. He said he was reading one by a Stoic philosopher named Epictetus. Of course, I had no idea who that was, but that night I ordered it in my hotel room, along with an Amazon recommendation, Meditations by Marcus Aurelius. I’d heard of Aurelius before from the movie Gladiator, but that's it.

When the books arrived, I picked up Meditations first. The experience was what Tyler Cowen would call a “quake book,” a book that shakes everything that I thought I knew about the world. I was nineteen and I found it so profound in that it's written by one of the most powerful men in the world — just for himself — about how to be better, wiser, more forgiving, how to deal with the stress of being in his position, his own mortality and all these emotions that we all experience in our lives. I’m immediately sucked into the rabbit hole.

So, on one hand it was the right book at the right time in terms of my development. I had just gone through a breakup. I was living with some roommates I couldn’t stand. There was a lot of drama and unpleasantness in my life at the time. The book is very much about taking responsibilities for your decisions, accepting things as they are instead of complaining about them, and then doing something about them.

Bill Clinton rereads Meditations every year. Tim Ferriss has described Stoicism as his ‘operating system’. Yet, it’s a philosophy that’s over two thousand years old. What makes it so timeless and appealing?

RH: What’s refreshing to me about so many of the Stoics is their straightforwardness. Not all of them, and not all of the translations, but a lot of them for sure. I think this is due in part to the fact that they weren’t written for publication. Stoicism’s whole approach is practicality, not a strict academic system. Epictetus talks about how the proper place for philosophy is in the hospital, not the classroom. Already this makes it so much more accessible. It doesn’t matter what language you’re reading it in or how old it is, they’re talking about things we as humans deal with on a daily basis.

"Practicing the Premeditation of Evils helps to identify what could go wrong, so you can mitigate a potentially negative outcome."

Stoicism is often thought of as being unemotional or even repressing our feelings. Do you agree?

RH: I think that's an oversimplification. Stoicism doesn’t promote the elimination of emotions, but rather, as Nassim Taleb puts it, the “domestication” of them. My understanding is that the philosophy encourages identifying and removing your unhealthy or destructive emotions. As you begin to react strongly to something, Stoicism encourages you to ask, "Is this helpful or harmful? Is it making my situation better or worse? Is my emoting going to do something about this problem or is it going to add to my troubles?" It’s more about sitting with your emotions, questioning them, and then if need be rationing them — not simply having no emotions.

In your book, you explore Seneca’s Premeditation of Evils. Could you explain what that entails and some benefits you’ve experienced from it?

RH: In our modern times, positive visualization is definitely in vogue, but Seneca’s Premeditation of Evils exercise is negative visualization. It’s deeply thinking about what could go wrong. The Stoics would rather be positively surprised than rudely awakened. I’ll give you an example: When the reporter contacted me for the SI article, I thought about how it could be transformative for the book, my career, and life in a lot of ways. So I did the interview the best that I could. And as soon as I got off the phone, I told myself, "The article has already been killed." Instead of getting all hopeful about this article, I already wrote it off in my head as it’s not going to happen because after the call there was nothing more I could do to make it better. It was out of my control. I went on and lived my life — and was pleasantly surprised that it did work out.

Eliminating disappointments is just one benefit, though. Let’s say you’re launching a new project. Practicing the Premeditation of Evils helps to identify what could go wrong, so you can mitigate a potentially negative outcome. Maybe there’s more effort you can give or a phone call you can make. Maybe there’s a contingency plan you can put in place.

How about the Inner Citadel?

RH: The Inner Citadel is a way the Stoics describe someone’s mental toughness, a fortress inside you to parry life’s inevitable adversities. You need to be strong in body and spirit to deal with life, and one way to do that is to read philosophy and the memoirs of people who overcame great adversity — people thrown in jail for their beliefs, or living in a war zone — these are ways you can strengthen yourself, no less valuable than book on how to survive a plane crash or getting lost in the woods.

It’s easy to take for granted that we live in one of the most prosperous times in history and to forget that we all come from much hardier stock, who endured unimaginable hardships. Even in the not so distant past, our grandparents and great-grandparents lived through the Spanish Influenza, one of the worst outbreaks of disease in history, but some survived. And we’re descendants of those survivors — of those who endured the Civil War, the Great Depression, and immigrating to America.

Are there any Stoic exercises you think are more
difficult to practice than others?

RH: For me, the most intimidating and uncomfortable is thinking about my own mortality. I’m not totally sure why. The fact that we’re all going to die some day and there’s probably nothing after isn’t typically thought of as an invigorating idea at first glance. But if this is all the time we have, then we should make the most of it. We won’t live forever. Our names won’t live on forever. Let that be a guide for what’s important.

"We won’t live forever. Our names won’t live on forever. Let that be a guide for what’s important."

There are some other exercises that are difficult and others that I don’t practice. Stoicism isn’t a religion, though. It’s not a bunch of commandments that you must buy into or go to hell. It’s a set of mental exercises from some really smart people who lived quite admirable lives. Take the ones that work for you and improve your life and make you a better person. If there’s something that doesn’t sit right with you or is outdated from two thousand years of psychological and biological progress, put it aside. Don’t see it as dogma, because that’s not helpful. And borrow from other philosophers.

What obstacles is Ryan Holiday looking forward to facing in 2016?

RH: That’s a great question. People often ask "What obstacles have you overcome in your life?" But the implication is that adversity is something you go through once. In reality, we get up every day and life is not exactly how we want it to be. Even when things are working well, things still go wrong. Life is a continuous stream of obstacles.

"Journaling regularly, meditating, sitting in silence before you get to work — there’s no single way to do it, but we all need to take time to evaluate ourselves. Often."

For example, I got an email from my publisher a few days go about how The Obstacle is the Way ran out of stock due to the popularity of this recent Sports Illustrated piece. So, there are people wanting to buy it, but can’t, which can be frustrating on one hand and makes me want to scream, but on the other hand there’s not much I can do about it. In fact, it’s a great problem to have. Stoicism gives me that mental framework to think about it that way.

My mentor Robert Greene talks a lot about Alive Time vs. Dead Time, which is related. Focusing on what I can control (Alive Time) while the book gets restocked, and spend as little energy as possible whining or complaining (Dead Time). Developing this ability to step back and look at yourself honestly is one of the greatest skills or capacities a person can have. It's also one of the most difficult to develop. If you can notice the sources or the roots of your problems, then you can try to build a routine around those things or compensating for them. It’s a process. Meditations is Aurelius reminding himself of this process and also creating it. Journaling regularly, meditating, sitting in silence before you get to work — there’s no single way to do it, but we all need to take time to evaluate ourselves. Often.

RH: I just got back from Thailand three days ago and I’m visiting my parents in Hawaii next week. Then in mid-January I’m headed to Norway. I went there this past summer too with its all-day sunlight and now in the middle of winter it will be dark the entire time I’m there. I'm excited for that. [H] 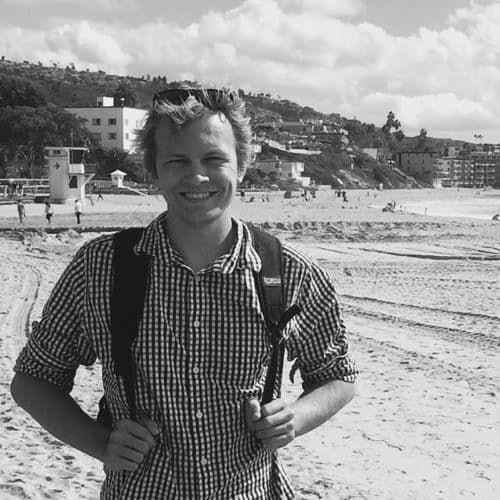 Jon Glatfelter overcame the obstacle of having his car towed minutes before a book signing
with Ryan Holiday on the far side of LA. Jon is an Editor at Huckberry.
You can read along with him here.