The Longest Day in the World

What could you do with 24 hours of daylight? Two ski mountaineers head to Iceland during the Summer Solstice to discover for themselves

Editor's note: The summer solstice happens when the sun’s zenith is at its northernmost point, and furthest from the equator, creating the longest day around the world. For many of us, this day looks a lot like all the other days of the year — it’s just a tad longer. In Seattle, the sun rises at 5:30am and sets at 9:10pm. But in Reykjavík, Iceland it rises around 3:00am and sets just after midnight, without leaving enough time between the two for the lights to entirely go out. It had us wondering — if you had 24 full hours of daylight and enough energy to go the distance, how would you spend it? 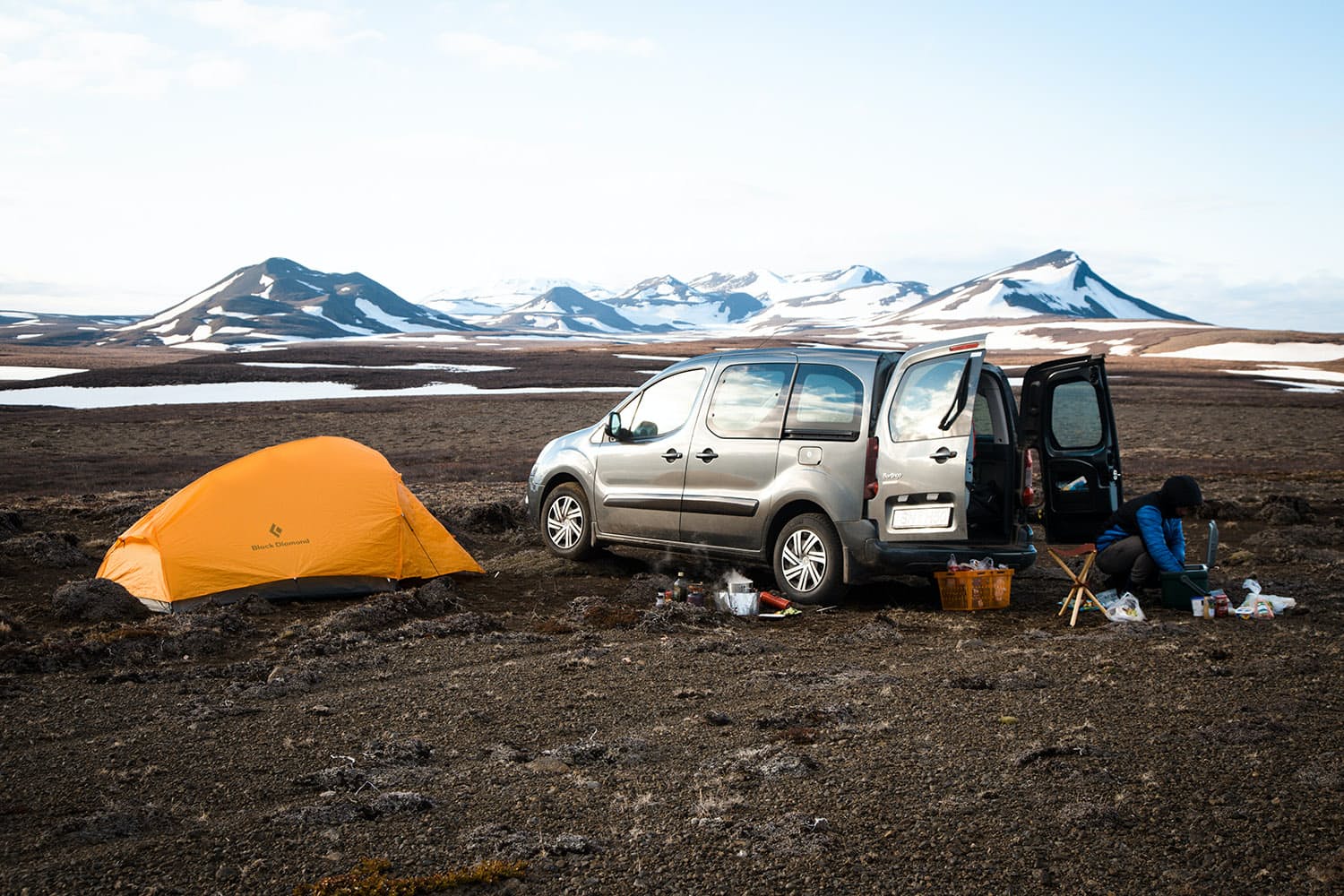 Climbers frequently claim that mountaineering tents are yellow to boost morale during extended periods of darkness created by heavy rain or snow, which tend to relegate alpine athletes to the boredom of their sleeping bags. But after forty-seven nights of camping in a country during its 24-hour summer daylight, I found myself wishing for a black tent. That’s because a black tent and a giant black tarp with little white starry dots would have made sleeping through the Iceland summer solstice much easier. 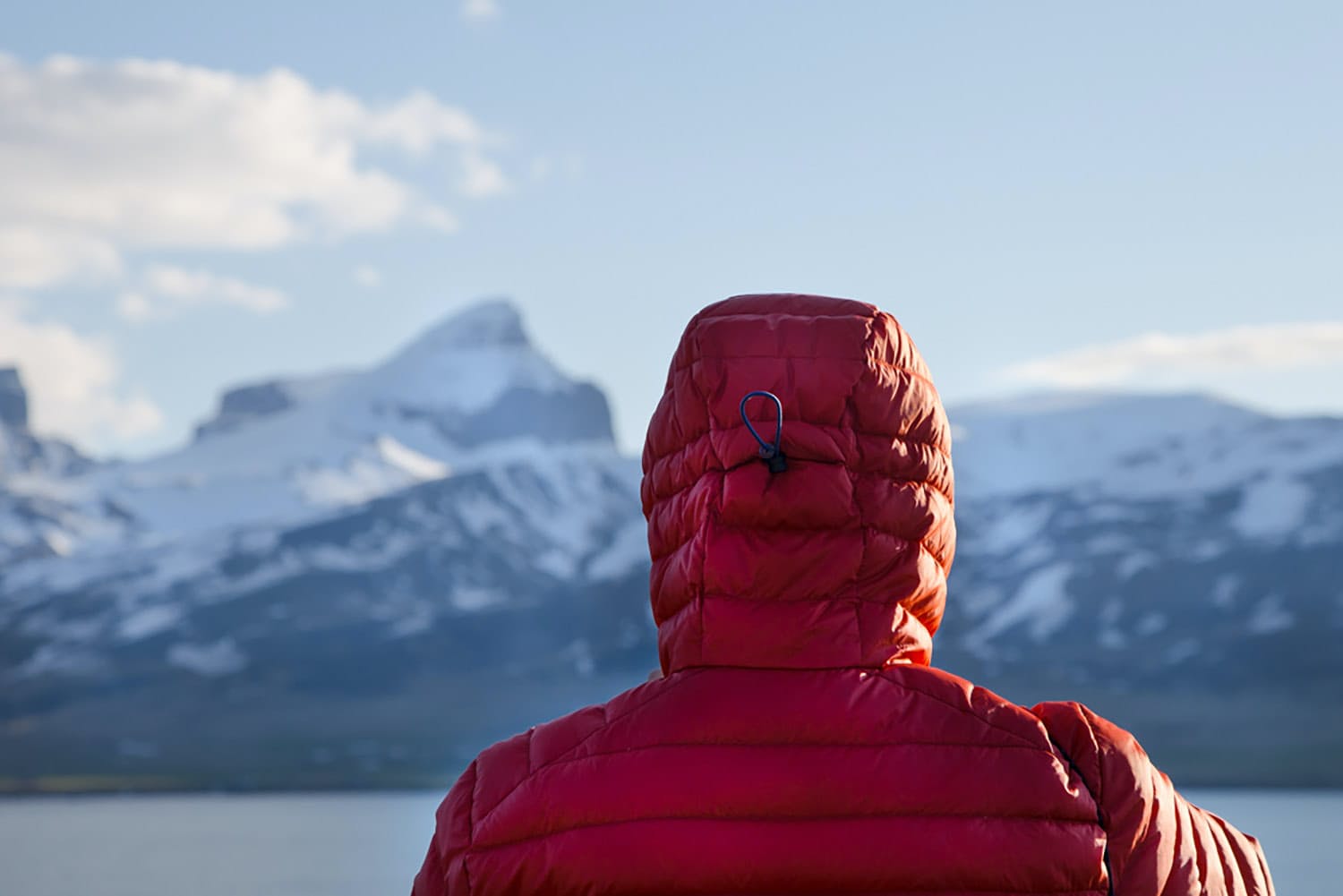 But I couldn’t make that tarp to drape over the clouds and across the sky. Instead, my colleague Alyssa and I crawled into our little yellow tent each night, oblivious to the time, using only our energy levels to determine when to rest after that day’s leg of our 4500-kilometer trek across Iceland, spent either driving, hiking, backcountry skiing, or trail running.

We sailed through fjords barely below the Arctic Circle to discover the routes less-traveled up mountains ripe for climbing, then descending on skis — always perfectly lit by the ever-present daylight. The constant light has a way of invigorating liveliness and providing protection from nightfall in the mountains, a rare combination in and of itself worth a visit to the Arctic. 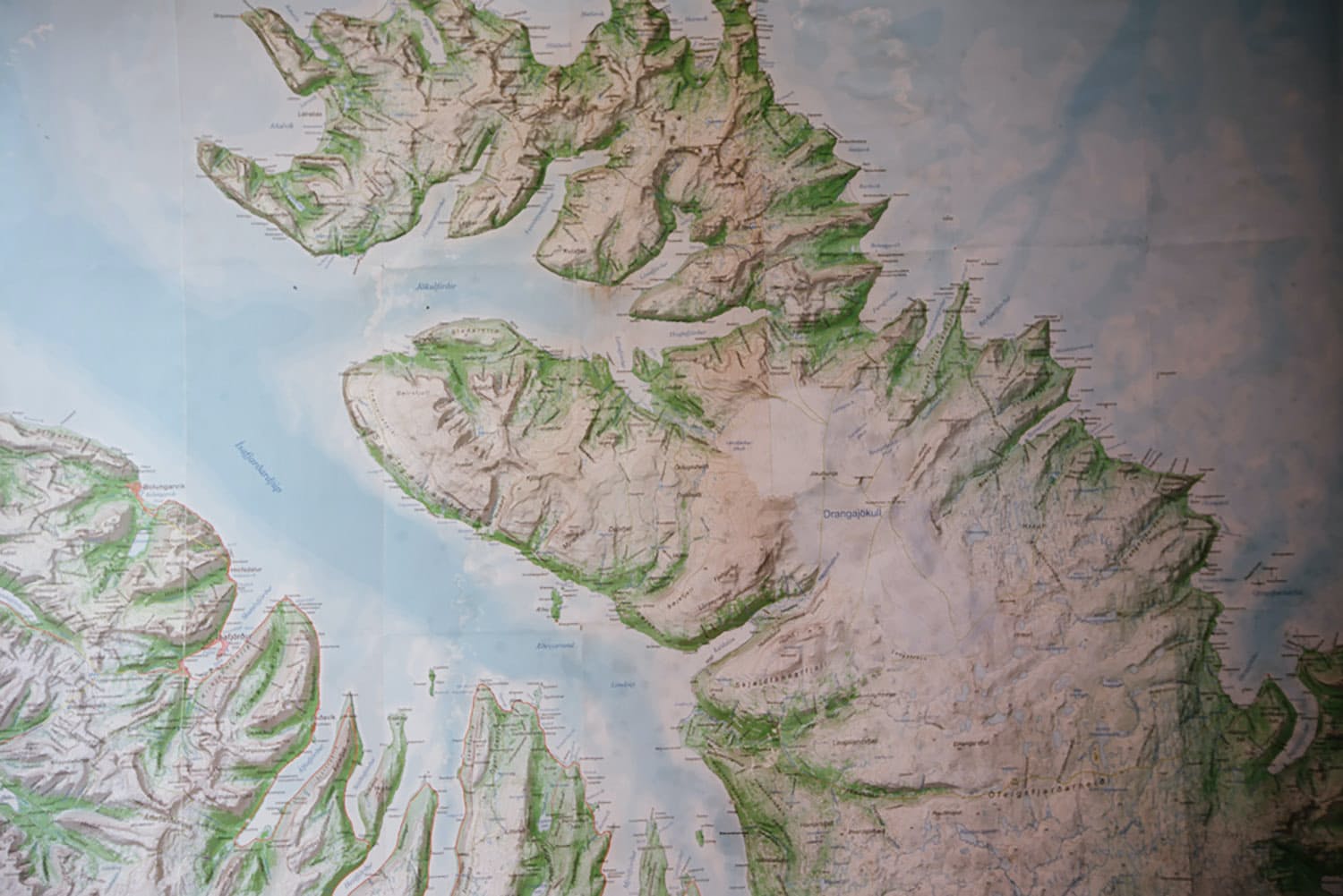 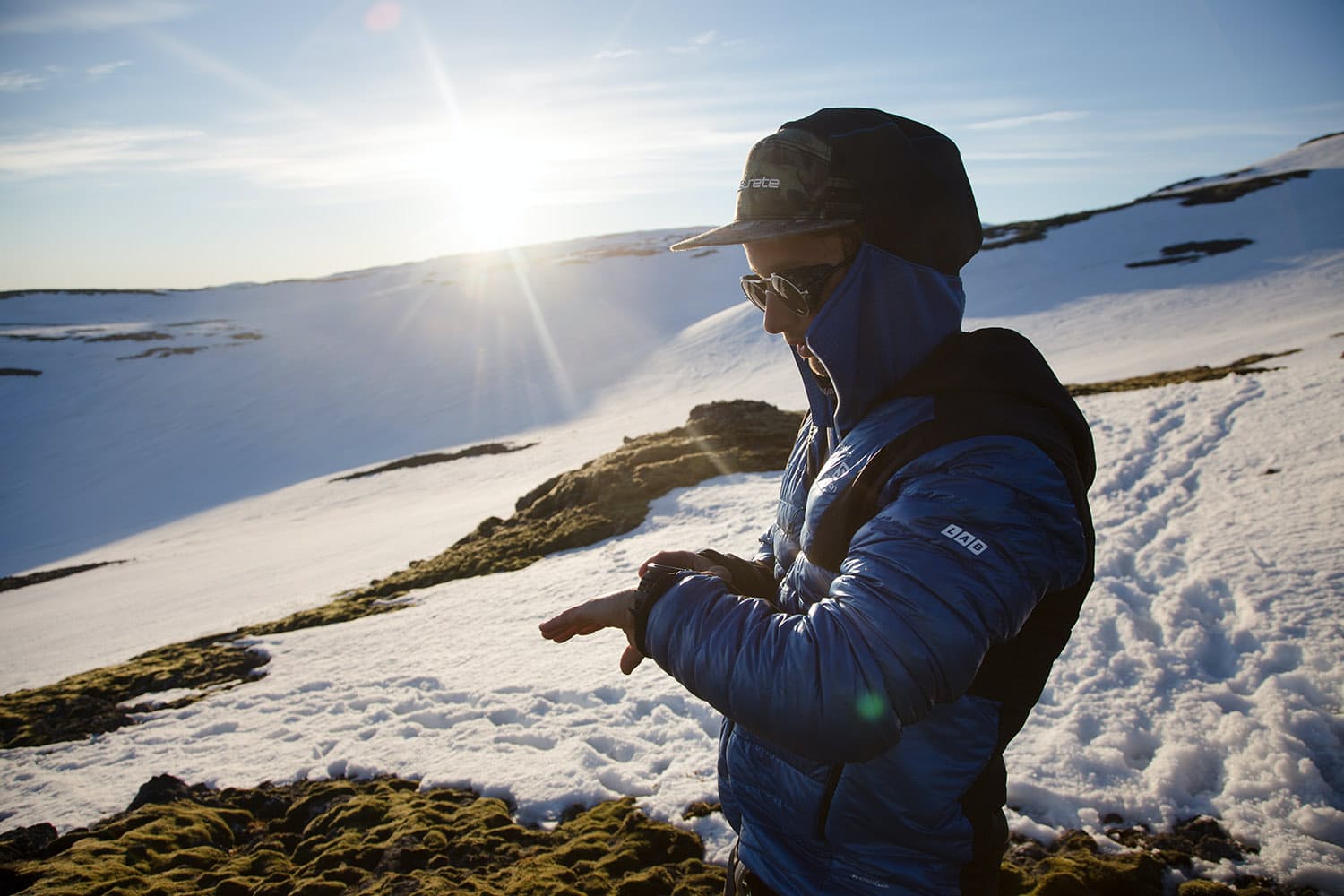 At one point we learned that it’s either prohibited or illegal (or both) to take two-wheel-drive rental cars on Iceland’s F-roads, the dirt tracks accessing and crossing the country’s interior Highlands region. Some time before that discovery, our little Citroen Berlingo had already made its way to the base of Hekla via a winding F-road, accompanied only by the occasional highly-modified off-road SUV. Iceland is littered with these very unique vehicles, and actually has a functioning industry of importing vehicles, modifying each for expert off-road prowess, and exporting them to various militaries, pole stations, and entities around the world. 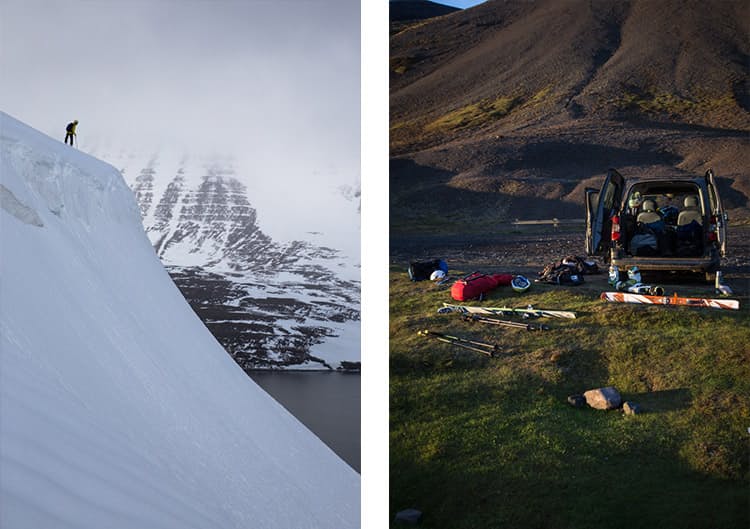 As the most active of all volcanoes in Iceland, Hekla is expected to erupt any day. As we neared the mountain, a white and blue sign appeared beside the rough road, warning us to download the Volcano App that will alert the government of our whereabouts should the volcano begin to erupt.

After the initial sign of eruption (typically a small earthquake), a climber only has about 30 minutes to evacuate before the violent eruption begins. We arrived at Hekla’s base under the 7:00pm sunshine, set up our tent under the 8pm sunshine, cooked dinner under the 9pm sunshine, and found ourselves staring up at a huge, active volcano, completely aglow under the 10pm sunshine. 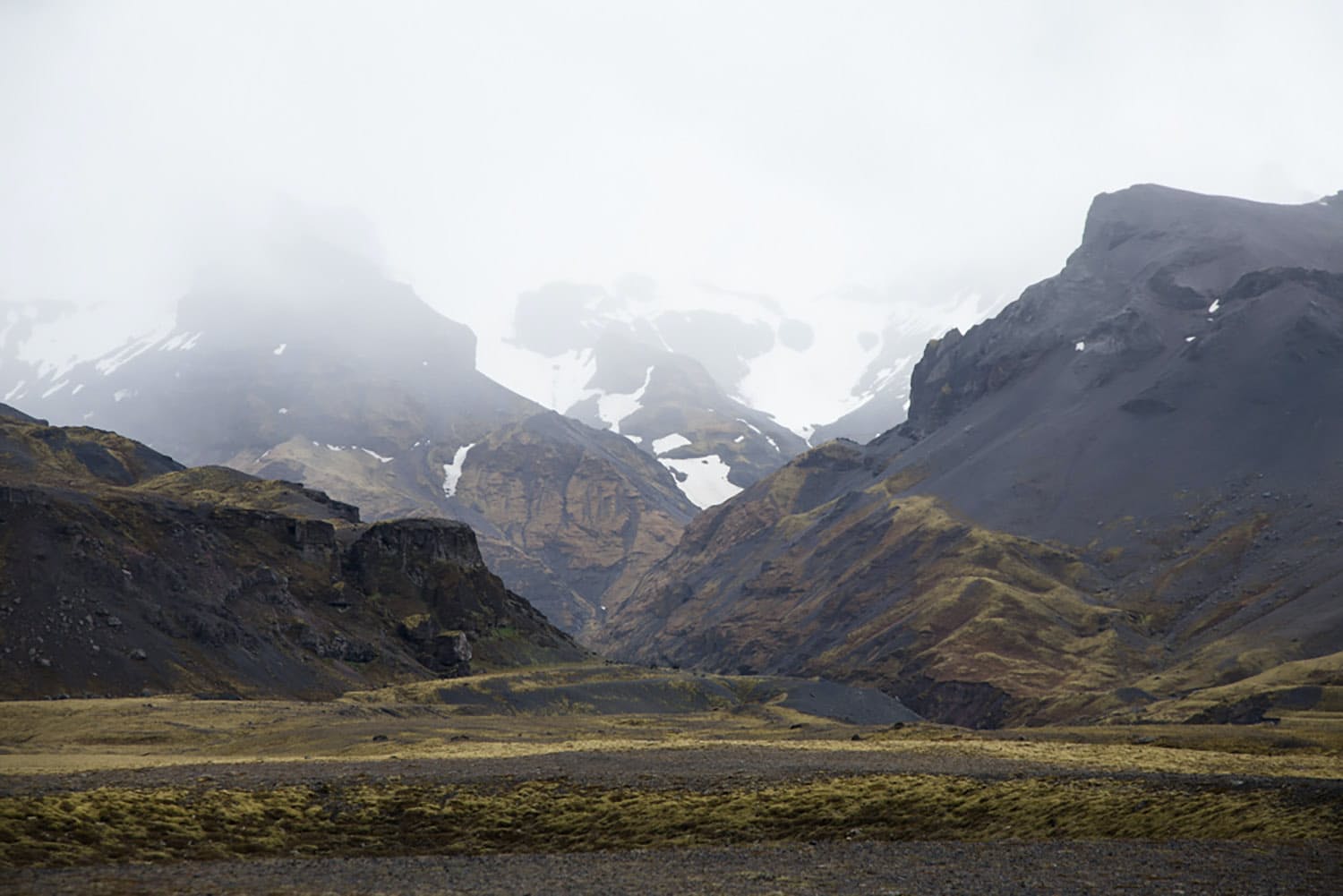 “Should we just go ski it now?”

“It’s 10:00, “Alyssa replied, “But, oh. We seriously could. We haven’t seen darkness for over a month, I certainly don’t think it’s about to happen tonight.”

“We probably don’t want to hang out beneath this thing any longer than we need to, right?” I asked. “We could be skiing when we have that ‘sunset’ light, around 3am. Let’s climb now?” 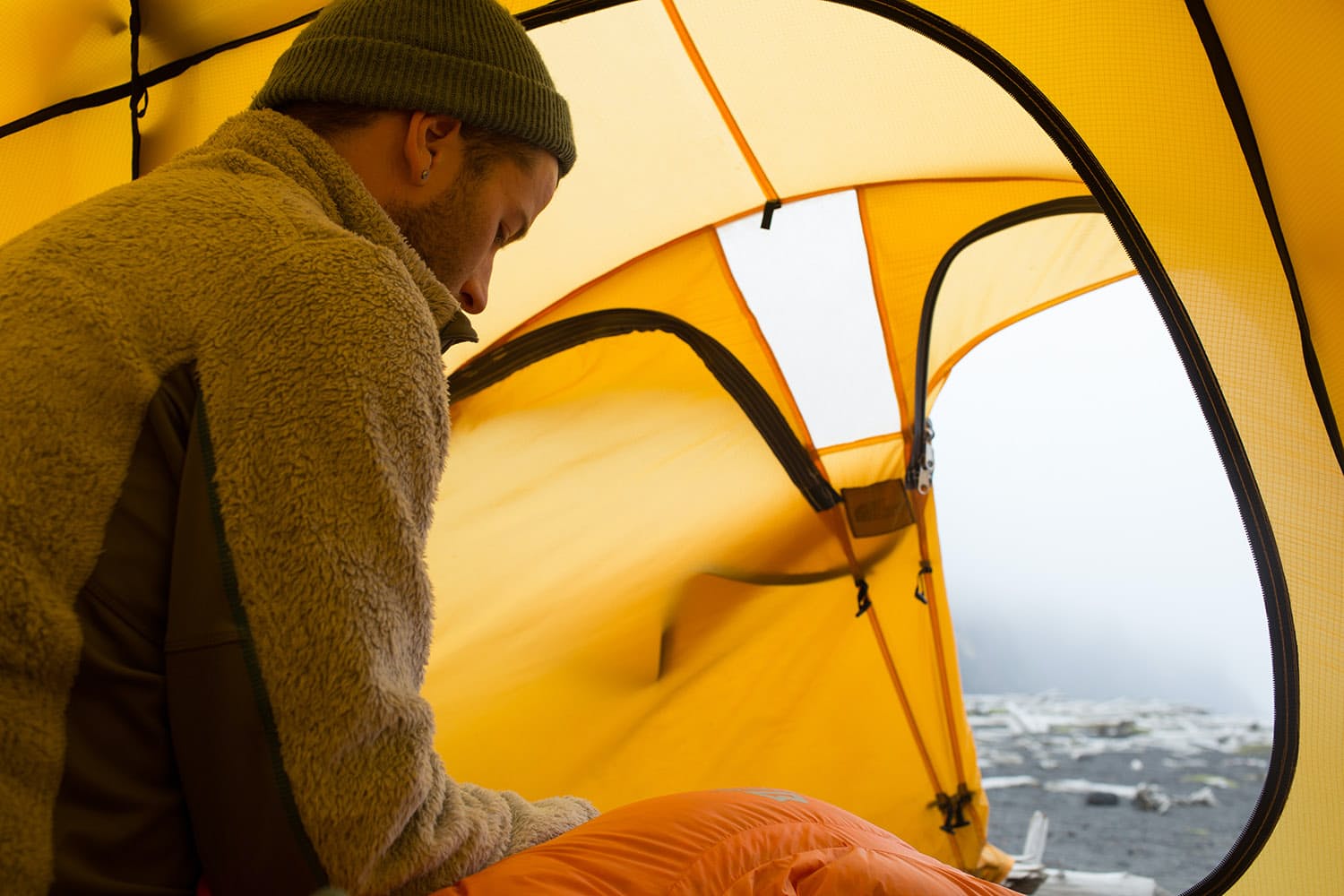 Without a tent fly, sleeping mask, or any semblance of darkness, we lay down under the 11pm sunshine, ready to wake up and start climbing at 6am. Or 8am. Or whenever we felt like it. As climbers and skiers, we’re used to abiding by nature’s melodic clock, rising before the sun and skiing before avalanche danger spikes in the afternoon. In Iceland, we fell into her Arctic rhythm, accentuated by the monochromatic 24-hour daylight, long and desolate fjords of snow-covered plateaus, and active volcanoes tempting us to flip the coin and see if we can make it up and down, without a rude interruption from the Volcano App.

Darkness closes businesses, ends climbing days, and puts people to sleep. Alyssa and I saw everything we could during our seven weeks in Iceland. Because with 24-hour daylight and a bright yellow tent, certainly nothing was stopping us from staying awake to do so. [H] 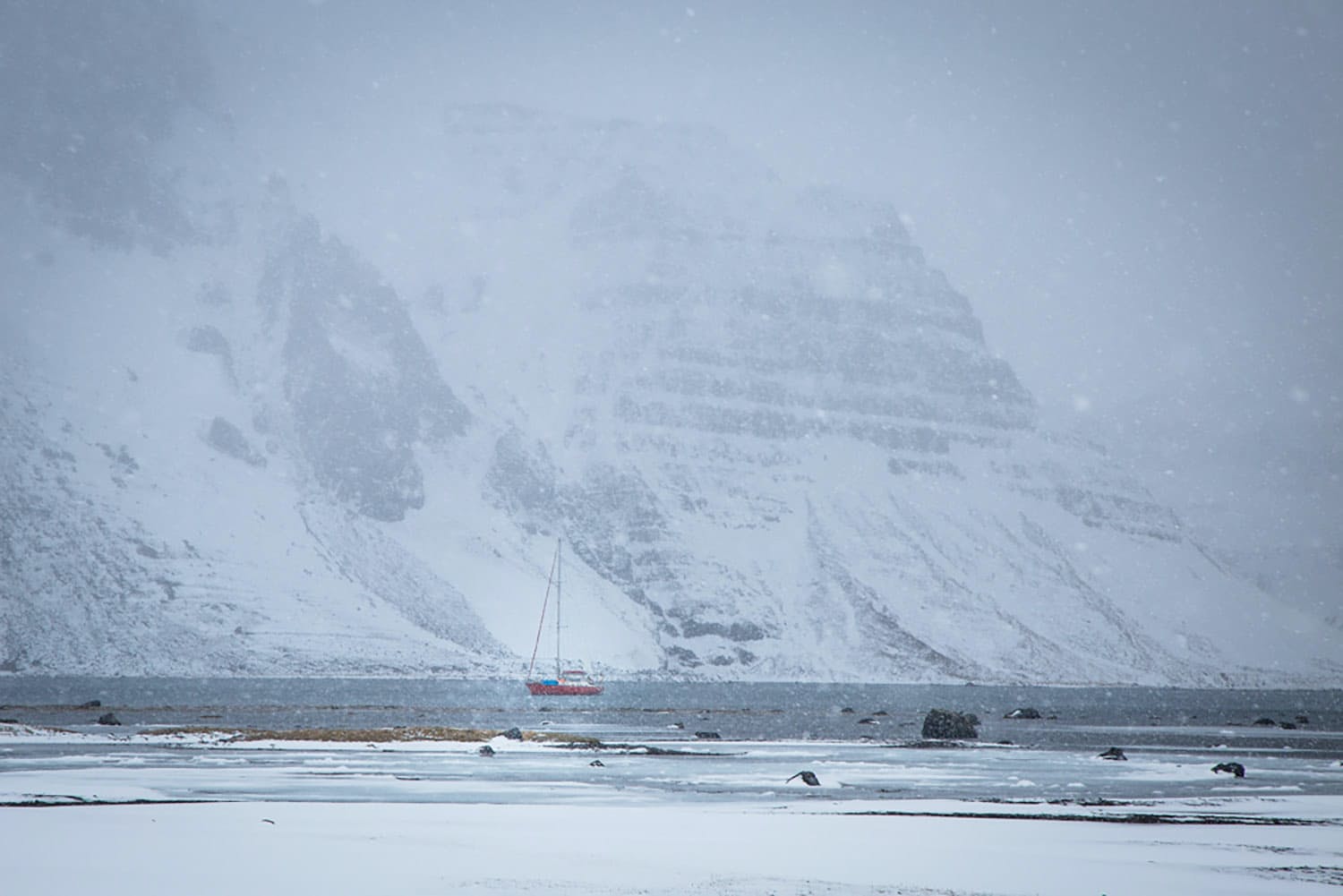 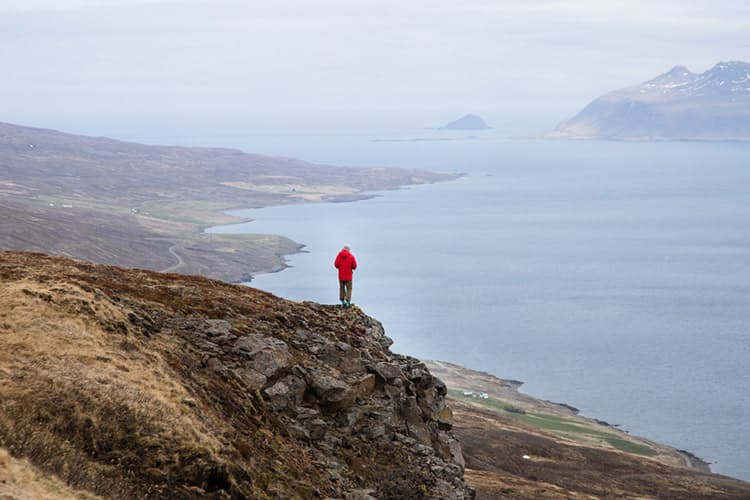 Should you find yourself in Iceland on the summer solstice, lucky you — you've got quite the day ahead of you. We've rounded up a few options for how we'd spend our 24 hours of daylight in Iceland. See you out there.

Ski Fresh Pow
If you’re daring, that is. The Westfjords make up the extremely mountainous region of northwest Iceland jutting out into the Denmark Strait toward Greenland. The Westfjords might be sparsely populated, but the small number of people that do live there do make it a priority to make the slopes as inviting as possible to visitors. Check out the ski area of Tungudalur in the town of Ísafjörður, try your hand at cross country skiing, or take a page out of Brody and Alyssa’s book and hit the backcountry — you can make a run from the summit to the beach without taking your skis off.

Check Out a Geyser
Drive less than two hours from Reykjavik and make your way to the Geysir Hot Springs Area, a popular stop along the famed Golden Circle. The area became geothermally active a thousand years ago and today is made up of 12 geothermal hot water blow holes and boiling mud pits. (I.e., these are not the kind of hot springs you lounge around in.) The largest of the geysers, Strokkur, shoots hot water up to 100 feet in the air every few minutes. 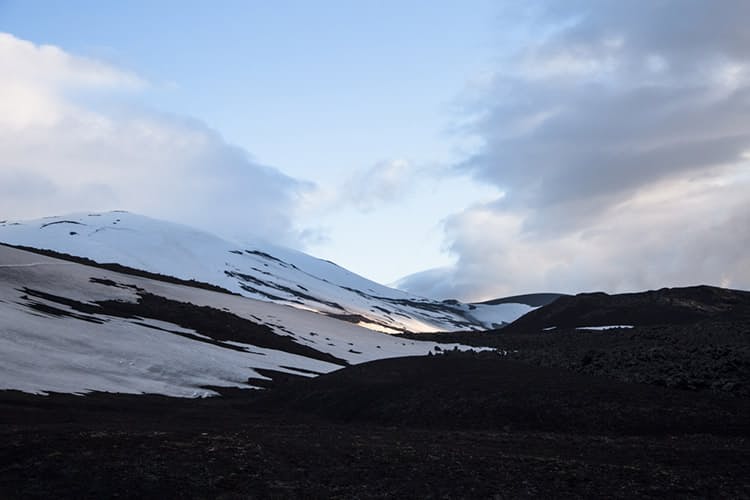 Run Across Volcanic Rock
For a country with around 130 volcanoes, 30 of which are still active, it makes sense that so much of Iceland is made up of volcanic rock. Some of the most stunning volcanic scenery is on the Snæfellsnes Peninsula jutting out from western Iceland. The peninsula’s highest mountain/volcano/glacier, Snæfellsjökull, lends its name to the surrounding national park, where you can visit bird sanctuaries, take in the dramatic seaside cliffs, or trail run over the miles of crunchy volcanic terrain. Fun fact? Snæfellsjökull is the setting of Jules Verne’s epic novel Journey to the Center of the Earth.

Soak in a Natural Hot Spring
Unlike the scalding hot water at Geysir, this stuff you can comfortably hang out in for hours — and you’ll want to. Just north of Mount Snaefell, located slightly inland on the eastern side of the country, you’ll find the Laugarfell Highland Hostel. Accessible for all types of vehicles during the summer and with room enough for several dozen people, Laugarfell is close to waterfalls and hiking trails and is home to a glorious pair of geothermal pools.

Hang Out with a Rescued Arctic Fox
On the far eastern side of Iceland, just outside the remote village of Eskifjorður and jutting up to the shore of the Norwegian Sea, book a night or two at the Mjoeyri Guesthouse. The small family business, run by husband and wife team Saevar Gudjonson and Bergling Ingvarsdottir, will not only whip you up some typical Icelandic dishes (pickled herring and shark meat included) and lead you on adventures (from reindeer hunting to hiking along fjords), but is also home to a rescued and very friendly Arctic fox. Forget the reindeer; you’re never leaving. 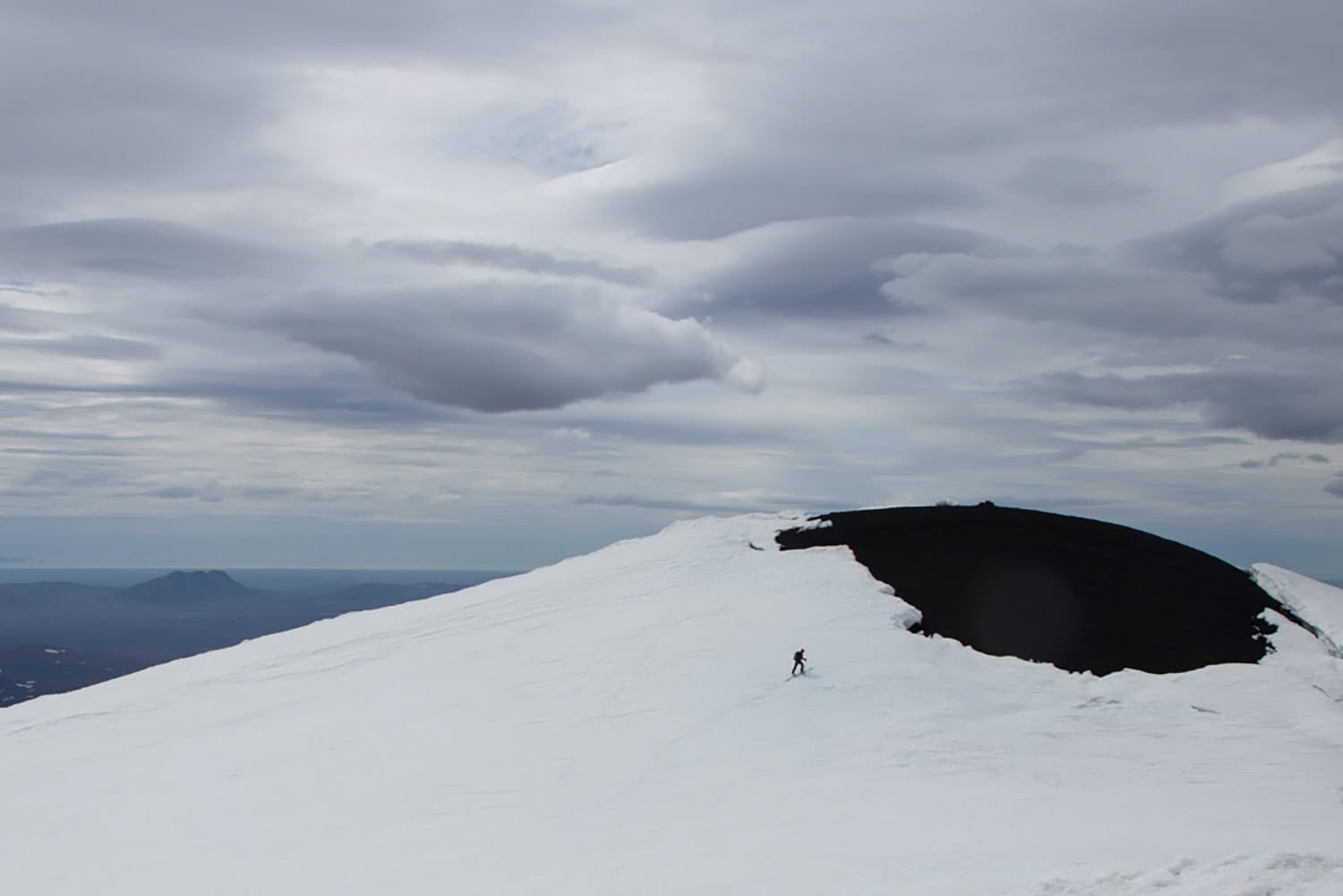 Brody Leven is a professional skier who ironically prefers climbing up mountains to skiing down them.
He travels the world's mountains, returning with stories to inspire others to tackle difficult challenges.
Check out his website and follow him on Instagram.

< The Huckberry Guide to Swimming Holes
Art and Adventure: A Guide to Marfa, TX >