Behind the Brand: Taylor Stitch

It's no secret that we're huge fans of Taylor Stitch here at Huckberry, nor is it any mystery why. But in an effort to really see the forest for the trees, we ducked the ropes and interviewed the three founders about surfing, their everyday carry, and how Taylor Stitch came to be. Introducing, Taylor Stitch — Behind the Brand.

What’s your name, and what is Taylor Stitch to you? 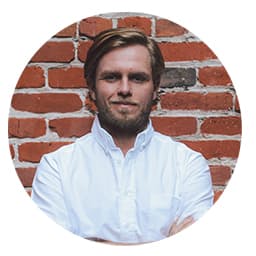 Mike Maher: My name is Mike Maher and I’m one of the 3 co-founders of Taylor Stitch. To me, Taylor Stitch is the sense of function that's inherently important in a man’s daily life, because we believe our clothes should move with us the entire day. The reason we started, in a way, was because me and Barrett just wanted things that were going to fit and work with us from the time we got up to the time we went to bed, and nothing more. A man's life should be simple and that was the big piece for us. 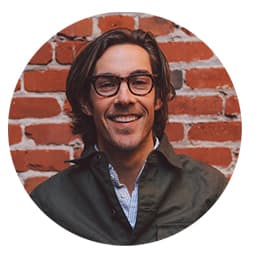 Barrett Purdum: My name is Barrett Purdum, and to me, Taylor Stitch is really an extension of just still being in love with shirting — something I've loved from a young age. 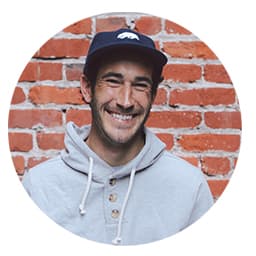 Mike Armenta: My name is Mike Armenta and I’m the Creative Director for Taylor Stitch. For me, Taylor Stitch has been an incredible outlet for my creative purposes and drive. Each day brings something new — whether it’s a photo shoot or a new project in the store. The possibilities are pretty endless with this company and it keeps me moving every day. 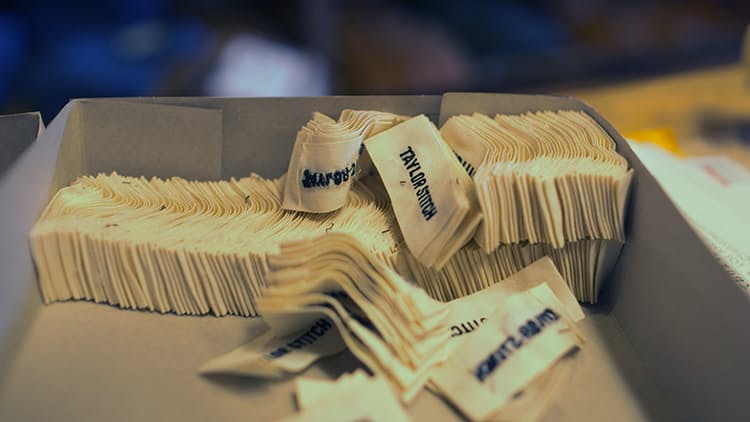 If Taylor Stitch could only sell one thing, what would it be?

Maher: White Oxford Shirt. It always looks good no matter where you are or what you’re doing. Plus, it's rugged, and it’s gonna hold up to a beating. Unless you’re dirty. Then you’ll want the Gray Oxford [laughs]. Generally, the products we try and create live just as well as in the great outdoors as they do in the city. One perfect example is our Yosemite Shirt. It’s a very classic chamois shirt that's been made for over a hundred years by some very big brands. For us, it’s about making it fit better, modernizing it and making it feel more at home in the city because it’s naturally going to feel at home in the great outdoors.

Purdum: I would say it would be just our Oxford. It’s just because that's what I'm wearing right now. I think Mike has one on too. I mean, most days at least one of has an Oxford on. Especially in California where things are little bit more casual, I think it's the perfect balance of in-between rugged modern wear. Things that you can wear to the office, camping, or really anywhere with a button up shirt on. You could even press this shirt and wear it with a tie under a suit, which is a pretty classic JFK-style look. 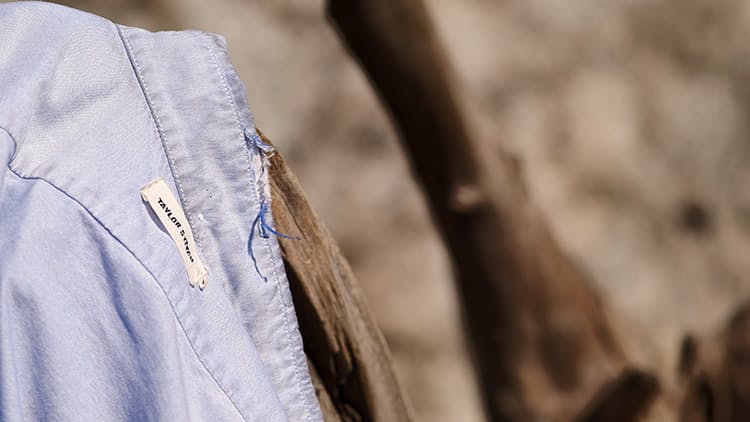 What’s the most important 15 minutes of your day?

Maher: To me, it’s the drive to work. It’s usually pretty peaceful and quiet so I really set myself up for what I need to do, because once you hit the office, there’s a million things, a million e-mails, and a million people asking what’s going on. Making sure that you’re orchestrating all these different pieces properly needs that crucial set-up time.

Armenta: I'd say the most significant part of my day really is during my commute from Bernal Heights on my bike. That’s kind of my awakening for the morning; just the moment before the chaos where I can be out of my head and quiet. I usually stop and get a cup of coffee on the way and juggle it on my bike — the remaining halfway back to the office, and gather my thoughts before I come in.

What part of your day is the most creative? Take us through the routine you follow to get there

Maher: Actually, the most creative part of my day is usually when I’m in bed — either first thing in the morning or at the end of the day. It’s one of those things where I’ll wake up in the middle of the night and grab a pen and paper and just jot some things down because you don’t want to forget it. The brand has become such a part of me at this point where you never get away from it. You’re always thinking about it in some way, shape or form. Whether I'm out on the mountain bike, or sleeping — it’s just always there. 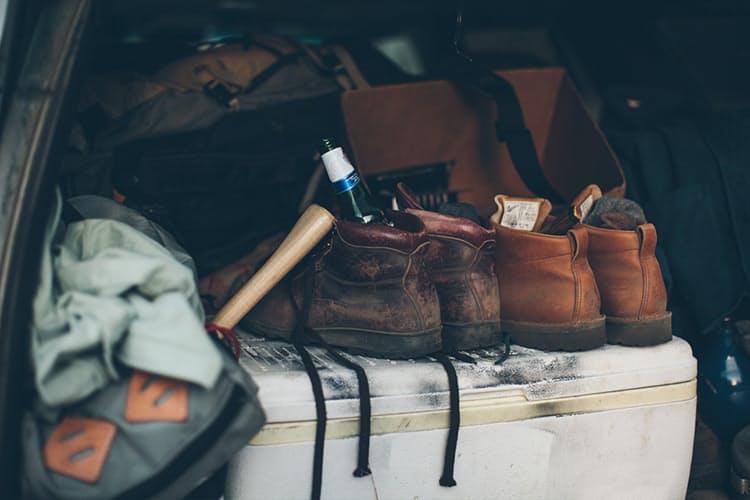 Who or what is the greatest influence on your work?

Maher: I think it’s the adventurers. It’s the people that are 'doing.' For me, it’s not really a specific person, but a type of person. It’s the obsessive. It’s the Earnest Hemingways, and the Jim Jameses. Those people who take their craft so seriously that everything they do reflects back on that, and they’re always trying to push the limits in some way, shape or form and really don’t care what anybody else thinks. And by doing it for themselves, they're creating a much larger community for followers.

Armenta: For me, it's surfing. There are times where I really can’t contain my thoughts or articulate what I need to say. I use it to get a little peace of mind to help me through the week. And then surfing on the weekend is kind of a reset button for me, because it allows me to come back, at the beginning of the week, feel fulfilled, at ease and focus my energy towards making the best things possible. 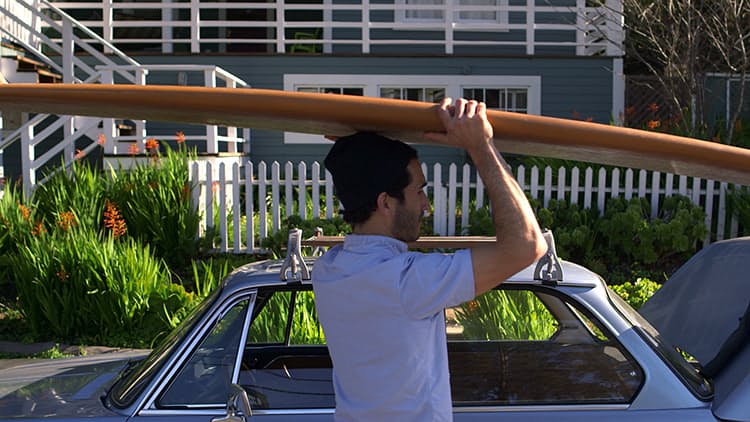 Do you collect anything?

Maher: Mostly gear — things that I can get outside with, like fly fishing equipment. Generally just stuff that gets me out of the city every weekend, things that keep me sane.

Armenta: I collect a lot of things with wheels, specifically things that keep me moving, like skateboards and bikes. I guess cars too. I have an old BMW that I really, really love, as it gets me out. I guess without wheels it would be surfboards — the kind of things that keep me in motion are definitely my biggest collections.

What’s on your desk, right now?

Maher: I like to keep things pretty simple and uncluttered, so I'm good with a corkboard where I slam ideas on the wall with just a Sharpie and a piece of paper. I’m not the Evernote sort of guy with a ton of apps. I want to visually see everything in front of me so I don’t need a ton. A lot of it comes through ideation before it all just gets written down.

Purdum: There are lots of things on my desk right now. Measuring tape, couple of different laydown flats for different products we’re doing, some fabric swatches, some bills, a half-finished cup of coffee, and the taxes that I probably should do this year... 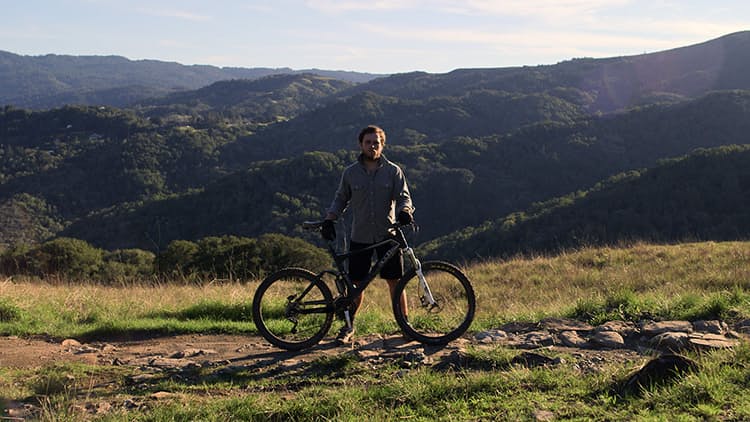 What is the most important tool in your quiver as a creative professional?

Purdum: I'd say the people around me. I rely on or kind of take care of overseeing our customer service, then the creation and delivery of product itself — things which do really go hand in hand.

Armenta: My biggest ally other than my DSLR, would be the people I work with. Without them, I’m really just pulling from nothing. They kind of create this amazing creative atmosphere that Taylor Stitch is known for. I met Mike and Barrett while visiting my brother in college, as they played lacrosse with one of my brothers. After I finished school in Boston, I wanted to get out of New England and was looking towards California. Mike and Barrett were already out here and offered me a couch to crash on. And while looking for jobs, I actually kind of fell into working with them and helping them brand Taylor Stitch from its infancy to where it’s now. It was definitely pretty serendipitous how I went from couch-crashing and job-seeking to helping start this company. 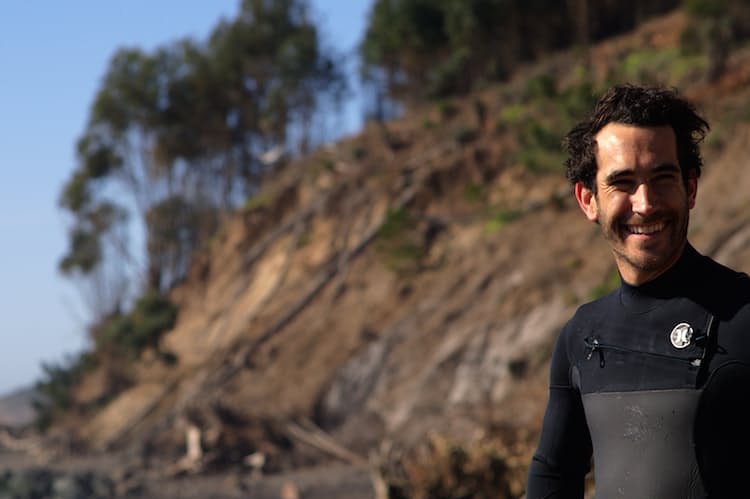 Do you have “brand envy?” Spill the beans!

Maher: I grew up 15 minutes from L.L. Bean, so I think their customer service proposition is the best in the world. I always remember that was the biggest brand envy I had growing up and ultimately one of the reasons we started Taylor Stitch, because we felt the experience in shirting should be better. I remember walking in to an L.L. Bean at 1 in the morning to buy fly fishing equipment before going on a big trip — I mean, where else in the world could you do that?

Purdum: I like people like Engineered Garments, because they create exceptional stuff. I also really love people that have history who have really been manufacturing for a long time. People like the Filsons of the world. Then, I also envy a lot my peers who are doing a great job — people like Mission Workshop making great bags, Tellason who is making great denim right now, or even Red Wing, making just great stuff.

Armenta: In the vein of our surfing and skateboarding adventure vibe, there's Monster Children, an Australian publication that I'm always nosing around in. They've just got the same adventurous spirit and a real clean sense of design, and I appreciate what they’re doing. 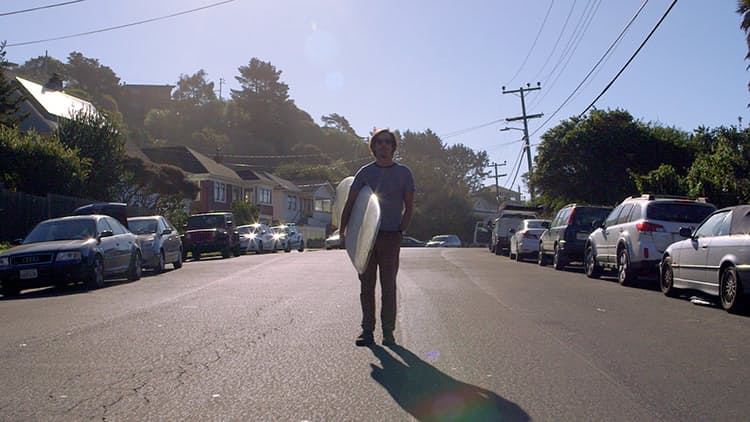 What’s in your “everyday carry?"

Armenta: Generally, I have my Taylor Stitch jeans or tee, then there's my Mission Workshop bag, a Maker wallet, Vans on my feet and a Fairends cap on my head.

What was your favorite toy as a kid?

Maher: We always collected Hess Trucks which were cool because it was a once-a-year thing that my grandparents from New York would bring out to us. It was just exciting because we didn’t have Hess gas stations in Maine, so we didn’t actually know what the truck was going to be — especially before the internet. I mean, what kid doesn't love a big truck?

Purdum: My Dad was actually a toy salesman so I have lots of toys as a kid. But there was definitely no LEGOs allowed in the house because he sold K’nex. So I had (and still have), like unlimited K’nex. 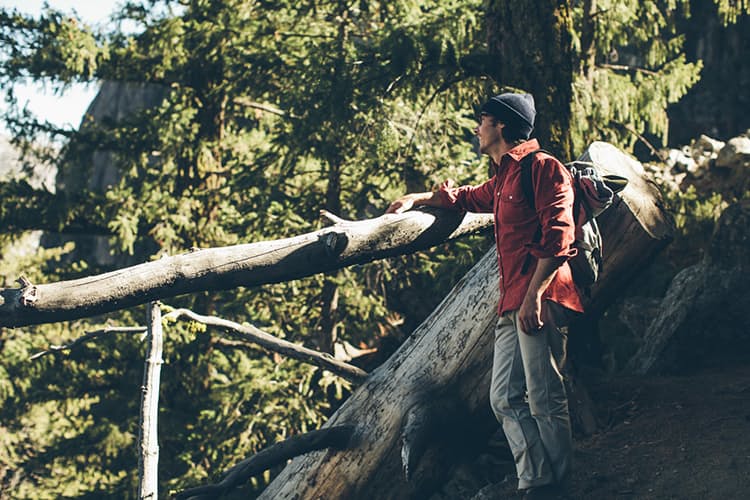 You walk into an I-80 truck stop at 2 in the morning and leave with...

Armenta: Ah... the late night truck stop. I would probably get Beacon water and some Sour Patch Kids. They’re kind of my vice on the road trips. I like to call it "car gnar."

What would you tell the 20 year-old version of yourself?

Maher: Continue to surround yourself with people that are smarter than you, continue to learn, continue to work, and keep working hard.

Purdum: Definitely just get as much adventuring as you possibly can. It’s true that once you get older, things get a little bit more serious. You have to buckle down. However, once you get older, you'll lock in your passion and your focus. So get out there and explore the world while you can.

Armenta: I would say not to take myself so seriously and be open to as many ideas as possible. But not to let myself get too distracted and really focus on what it is that makes me happy. Some life decisions can be made if you just go with what you think is fun at the time. [H] 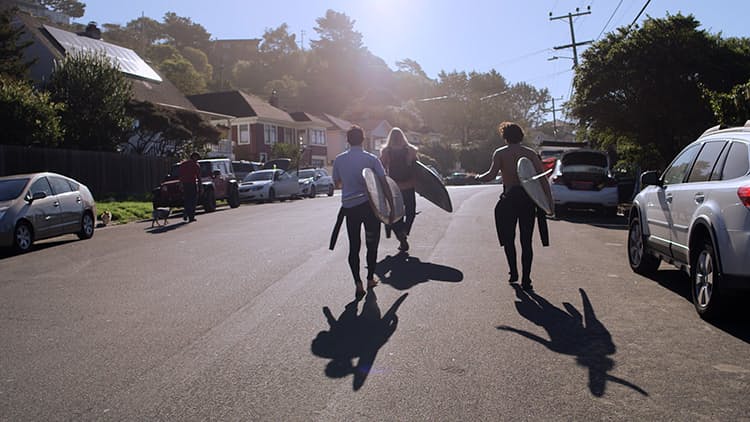 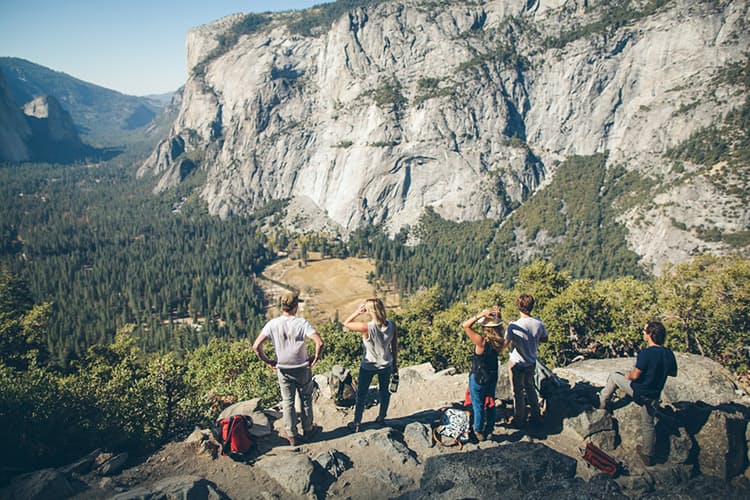 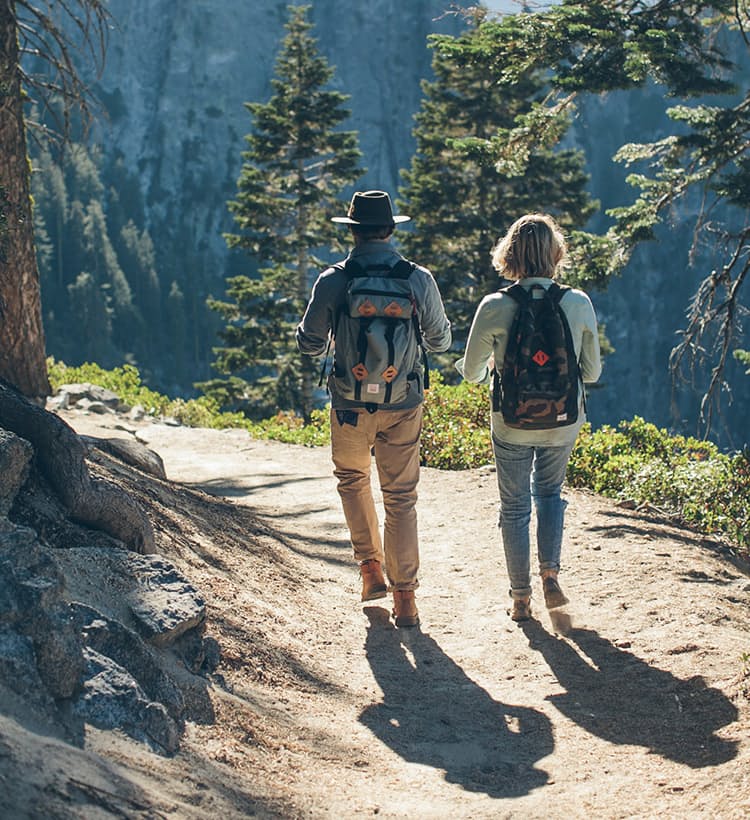 Still want more from the boys of Taylor Stitch? Be sure to follow them on Instagram, or subscribe to their Blog for the latest comings and goings.