Sit back and get ready for some serious weekend inspiration, courtesy of our friends at The Cabin Chronicles

“I went to the woods because I wished to live deliberately, to front only the essential facts of life, and see if I could not learn what it had to teach, and not, when I came to die, discover that I had not lived.”

Spring, summer, fall, winter – no matter the season, we're eternally itching to get out of the city and into a cabin in the woods. But while we're sitting at our desks from Monday to Friday, there's no #cabinporn Instagram account better than The Cabin Chronicles when it comes to getting stoked for another weekend of warrioring.

To share the inspiration, we hit up our buddy JJ Eggers, The Cabin Chronicles' founder and man behind the 'gram, to pull together some of his favorite cabin features from around the country. It was hard to choose just one, which is why we have 12 to get you started on planning your next weekend getaway. [H]

Want to share the cabin love? Tag your photos #thecabinchronicles to have your home away from home featured. 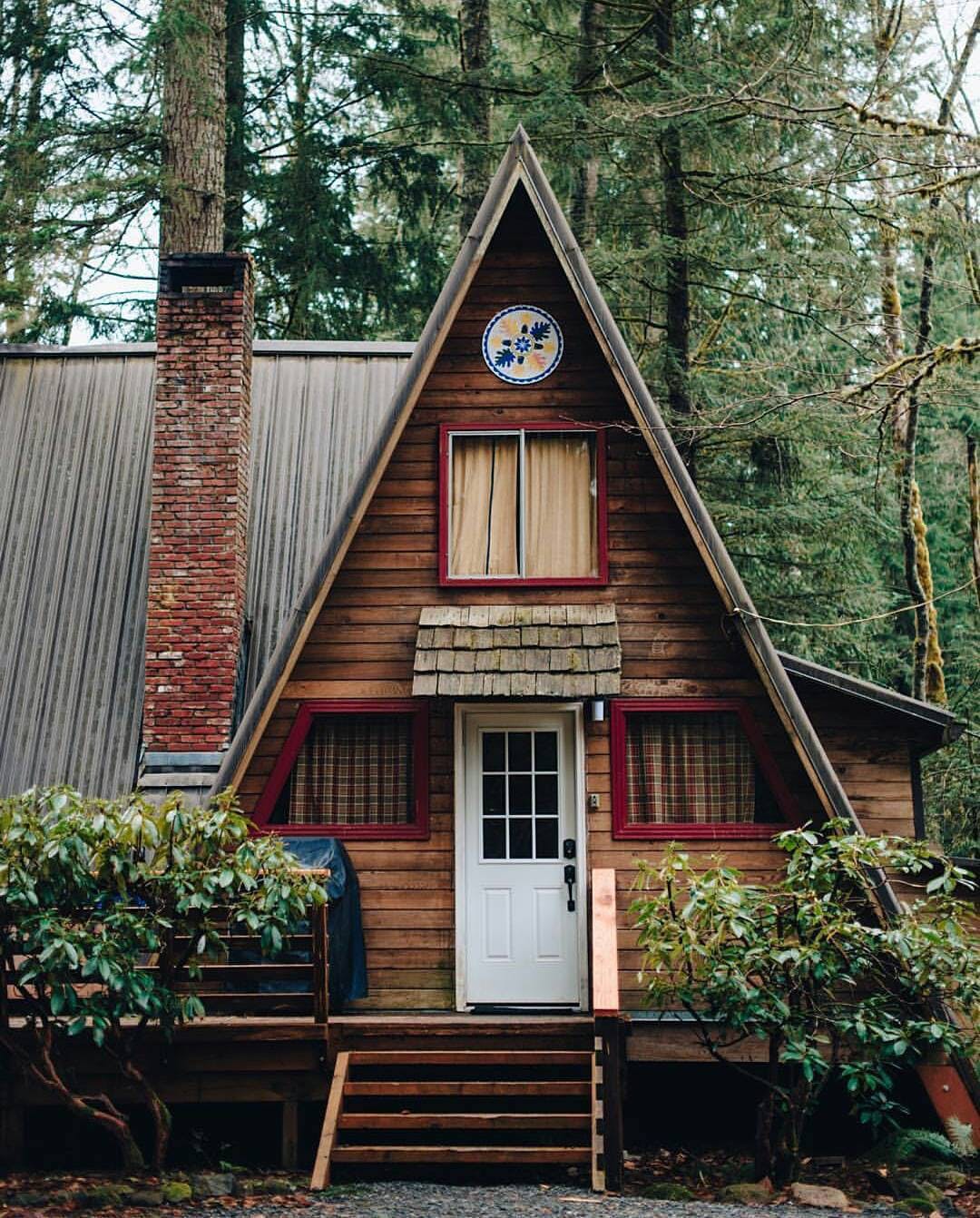 "Escape to a place ripped right out of a children's storybook; if Hansel and Gretel moved to the Pacific Northwest, this is where they'd live. And after staring at this photo for a while, don't be surprised if you move beyond the salivation state of the quaint yet upkept presence, and actually move in for a bit." Photo by @k_sto. 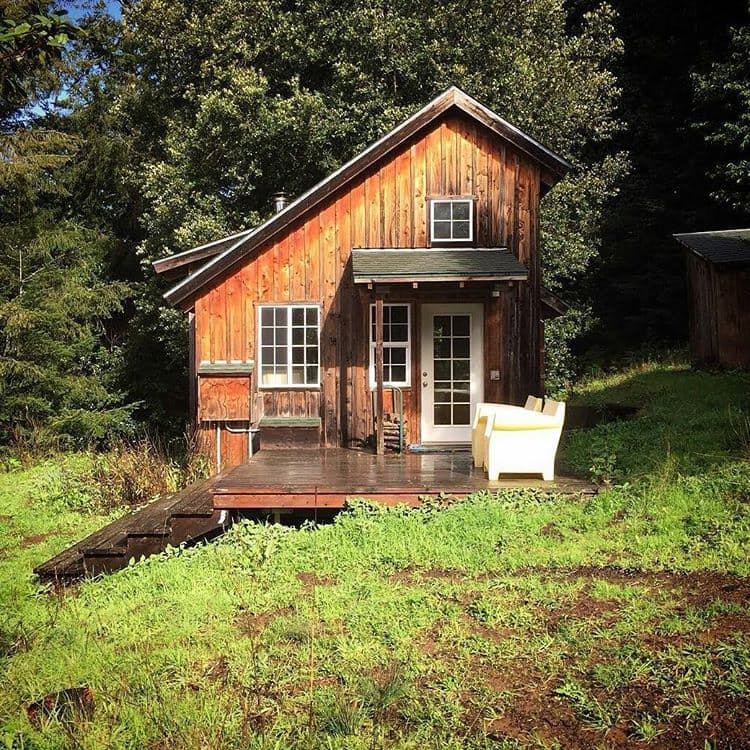 Oz Farm in Point Arena, California, is a certified organic and biodynamic farm where you not only escape, but create, harvest, and collaborate. Whether it's a workshop, wedding, or just a retreat you're after, this Mendocino getaway is certain to refresh your spirits. Photo by @villageozfarm. 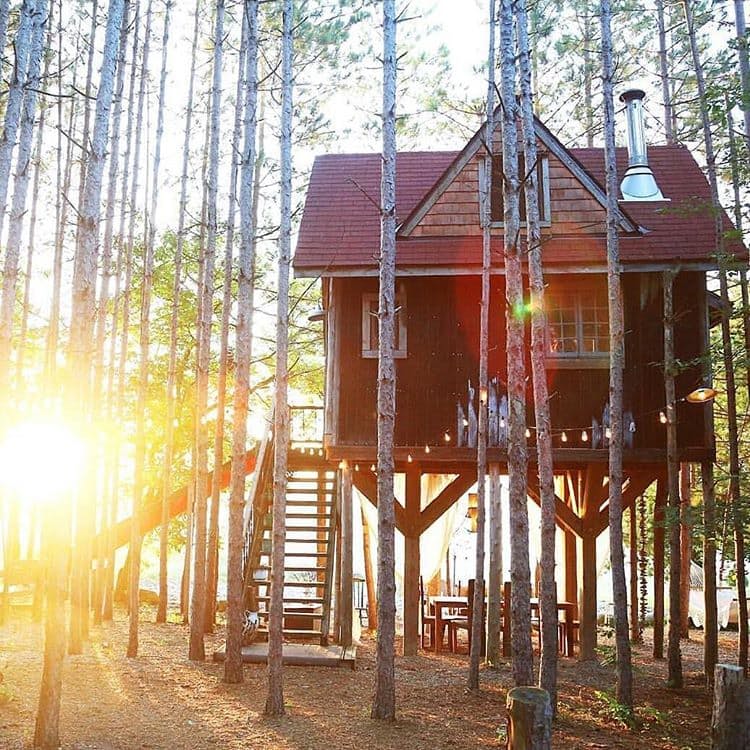 "Thanks to this photo, Durham, Ontario just may have emerged from obscurity for you and shot all the way up your bucket list, not-so-kindly nudging the top item to next perch down. Imagine the late nights spent chatting on those tree stumps before you decide to turn in for the night knowing you're going to wake up in the treehouse you always imagined as a kid. And in true child-like fashion, you would get to take the slide to the bottom — naturally." Photo by @lynneknowlton. 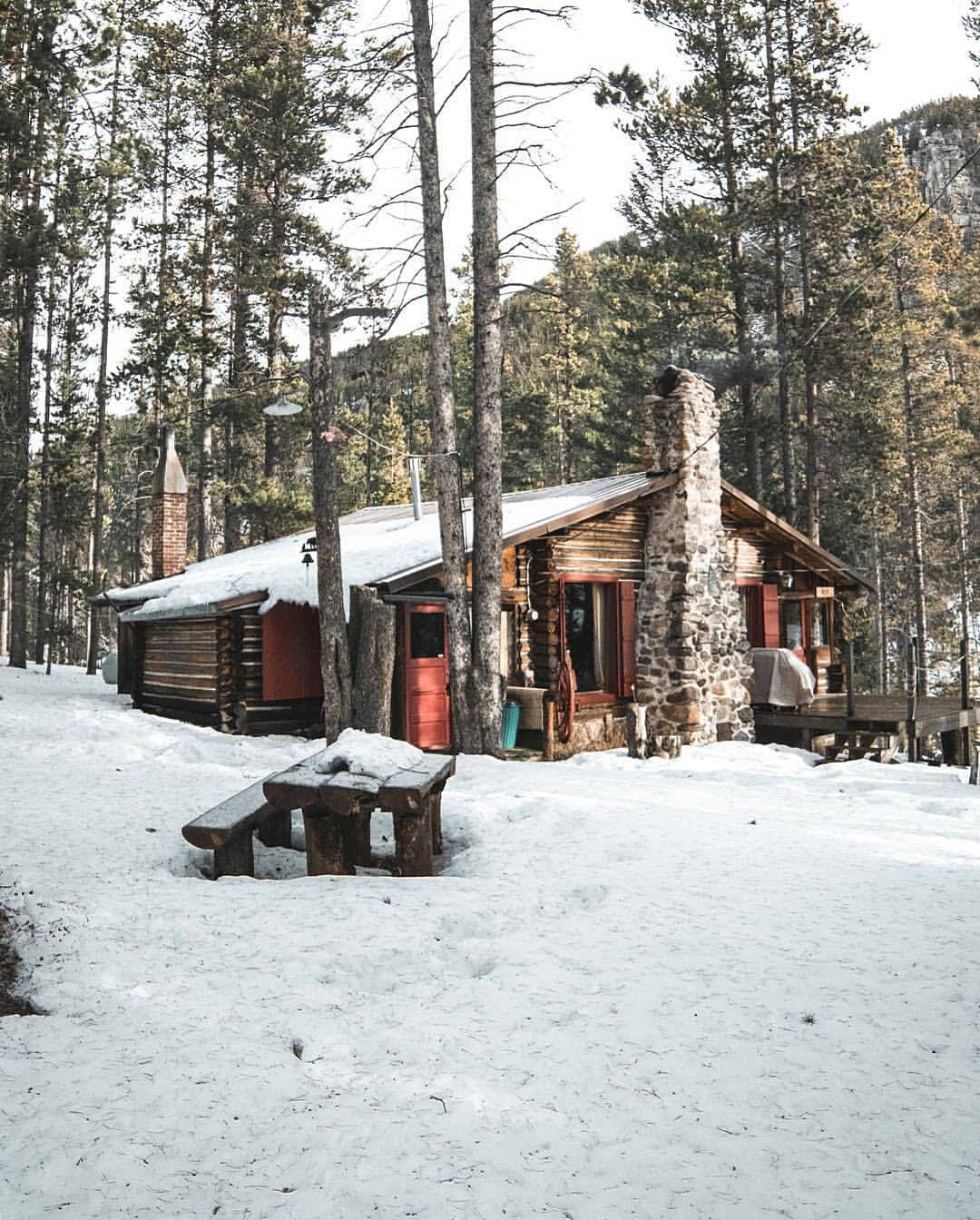 "In the film Hunt for Red October, Captain 2nd Rank Vasily Borodin's last dying words were, 'I would like to have seen Montana.' Don't be like Vasily. Head straight to Montana and make it a point to stay in a ranch-style cabin with plenty of picnic space while you're at it." Photo by @derektice. 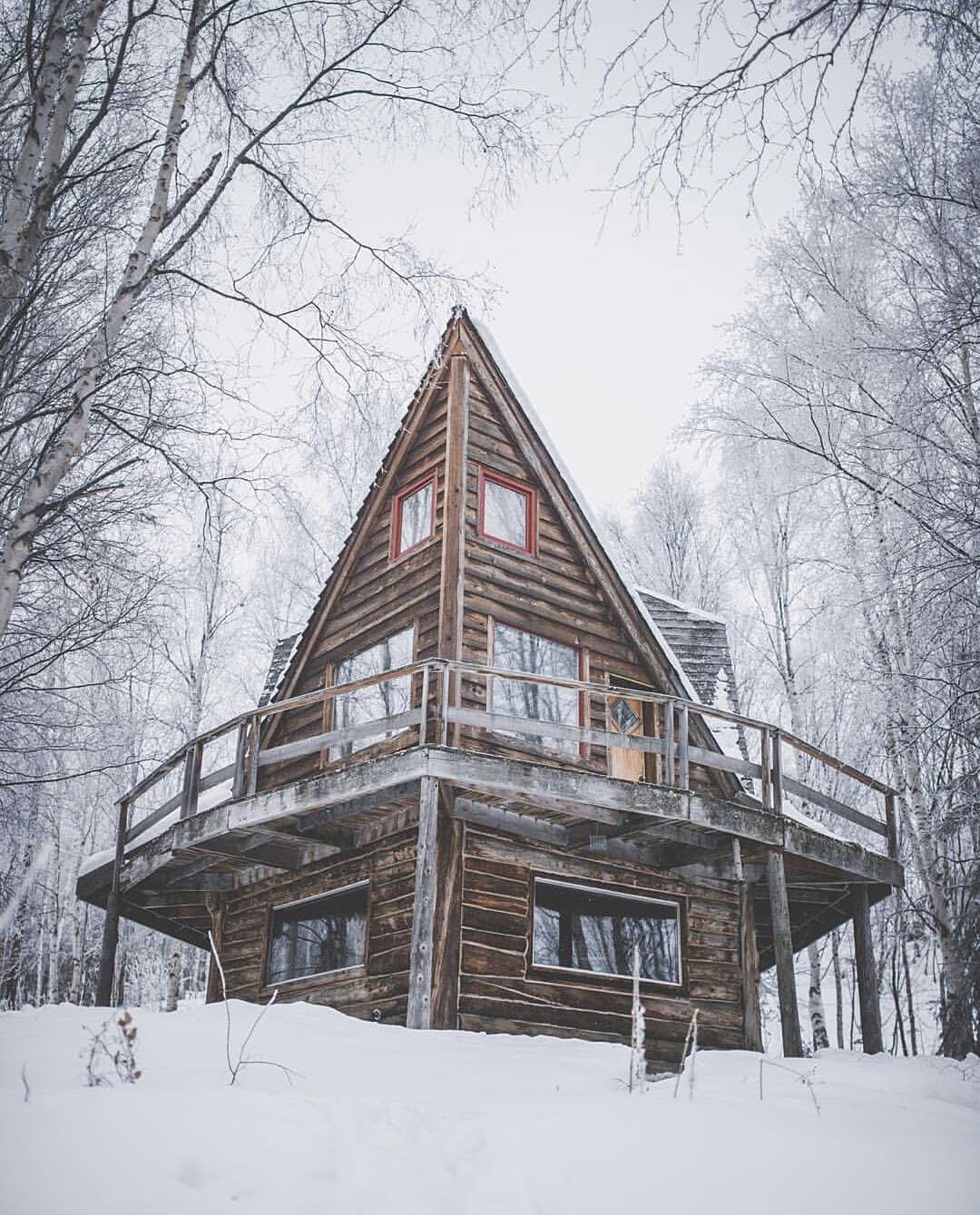 "Oh, the dark and ominous vibes coming from this cabin in Ester, Alaska! This is definitely harboring some kind of villain in a book that we only thought was fictional." Photo by @johnwingfield. 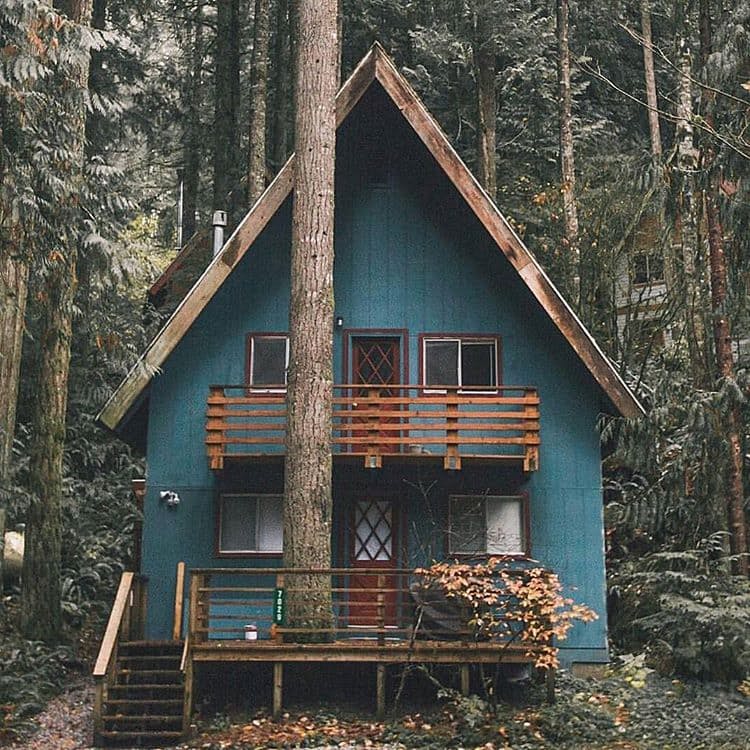 "The Pacific Northwest has no shortage of amazing cabins. In fact, I can't go much longer than three days without posting one from the area. But this one has to be one of the most memorable from the area. The elephant-in-the-room that is the huge tree sticking out of the front porch is one thing (you would hug it every day, admit it!), but the deck up top and bold teal color also make this one a Cabin Chronicles all-star." Photo by @robstrok. 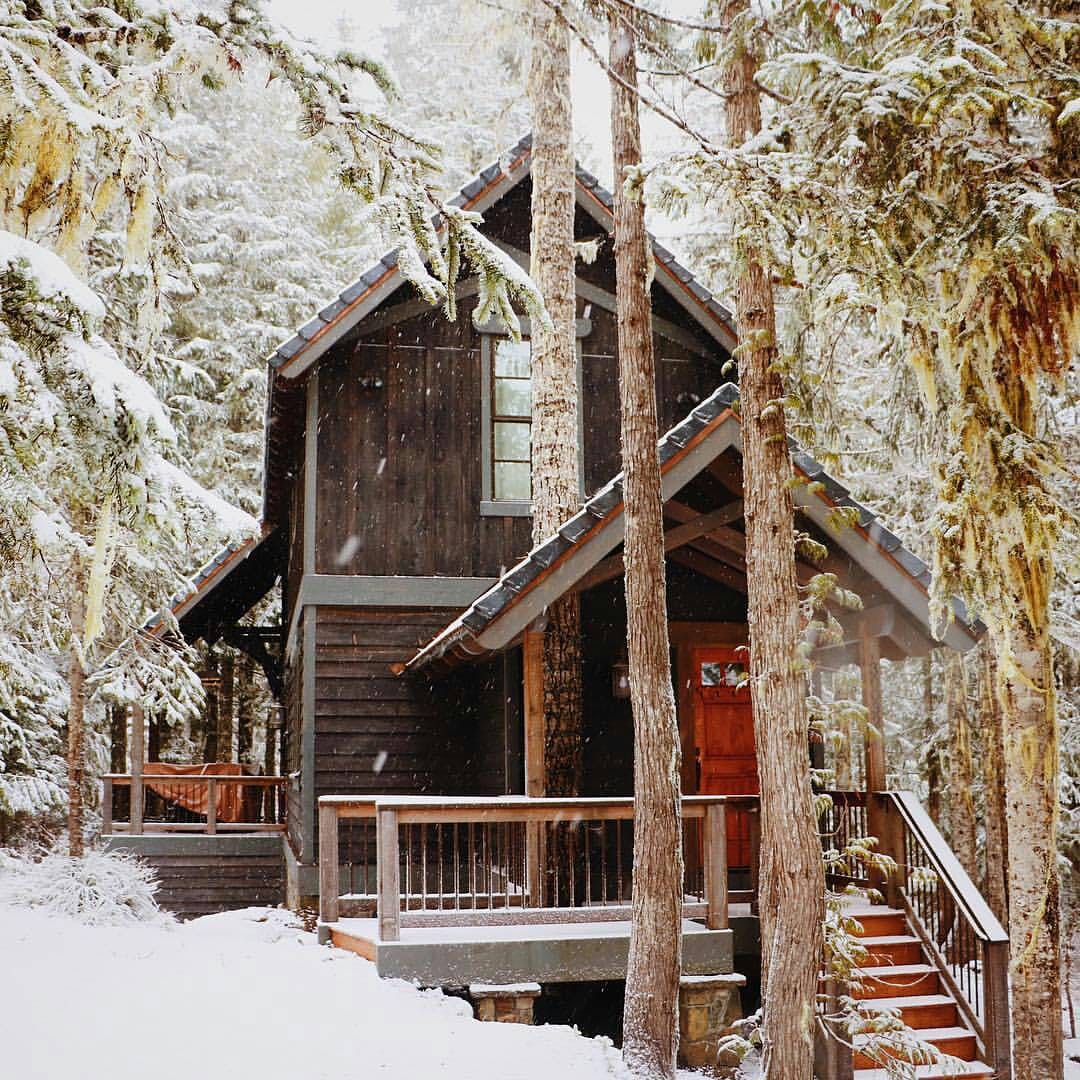 "This Oregon cabin is just so integrated into the forest around it. Why clear all the trees around the area when they could instead immerse you in their shade, after all? Also to love are the two patios and steep-pitched roofline." Photo by @bethkellmer. 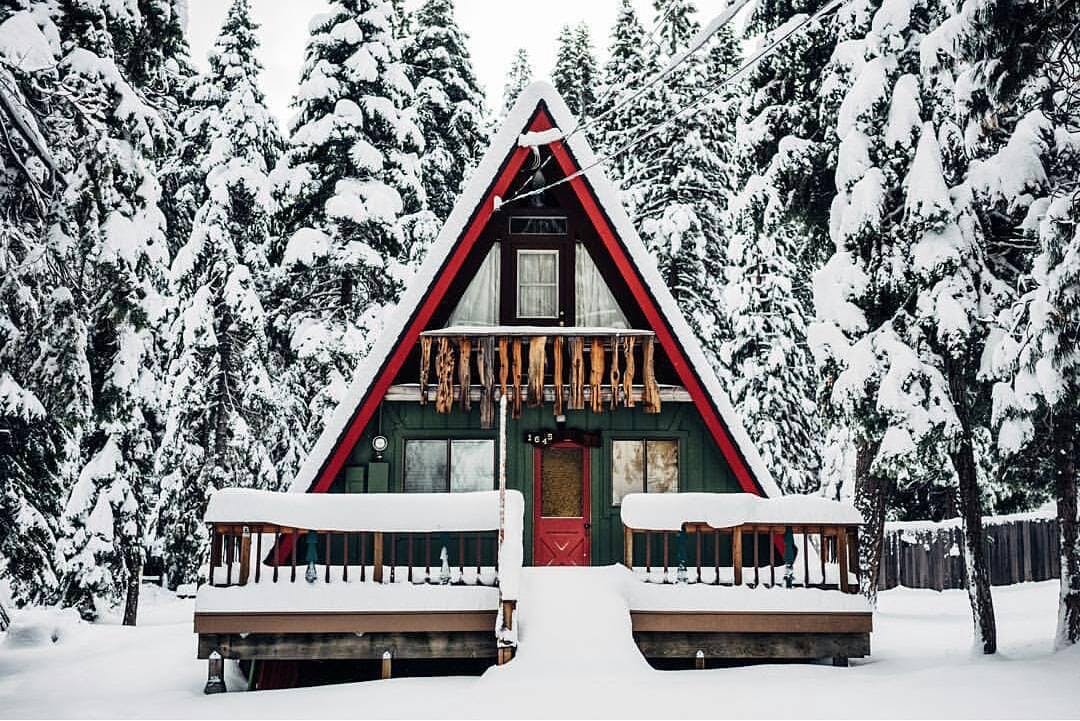 "Christmas-y and cozy as all get out! This Lake Tahoe A-frame instantly takes you away with daydreams of stoking the fire, sipping hot chocolate, and reading a book in a soft chair before ultimately dissolving into it. All this, of course, after a long day spent playing in the freshly-fallen Sierra snow." Photo by Embry Rucker. 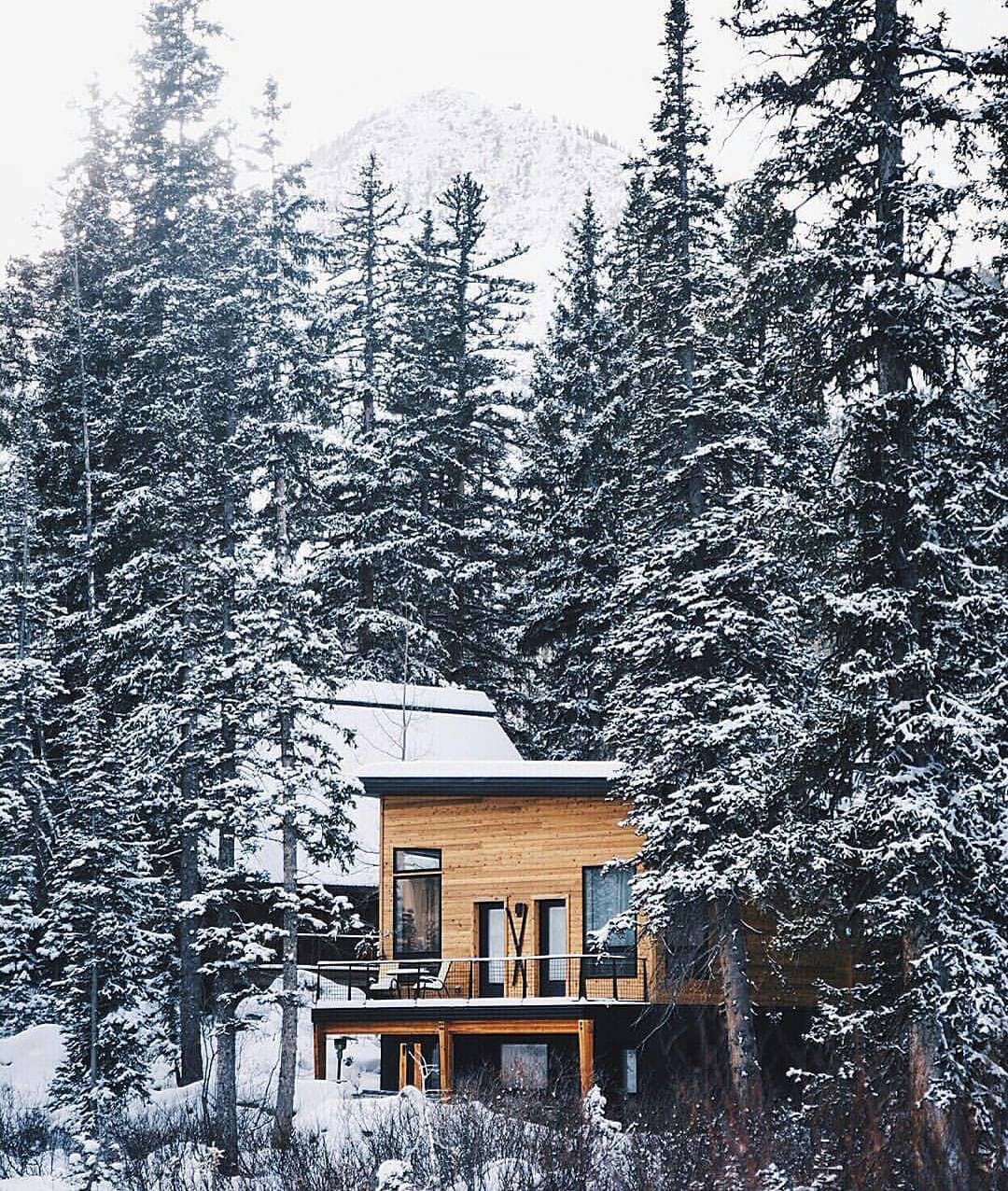 "The Cabin Chronicles is not immune to modernism. The problem is, most cabins with modern architecture are monoliths and I am more than reluctant to posting anything over three stories tall — which is still pushing it. But this one made it to the favorites list because of its sleek design and close proximity to Brighton Ski Resort in Utah." Photo by @caseyshalliday. 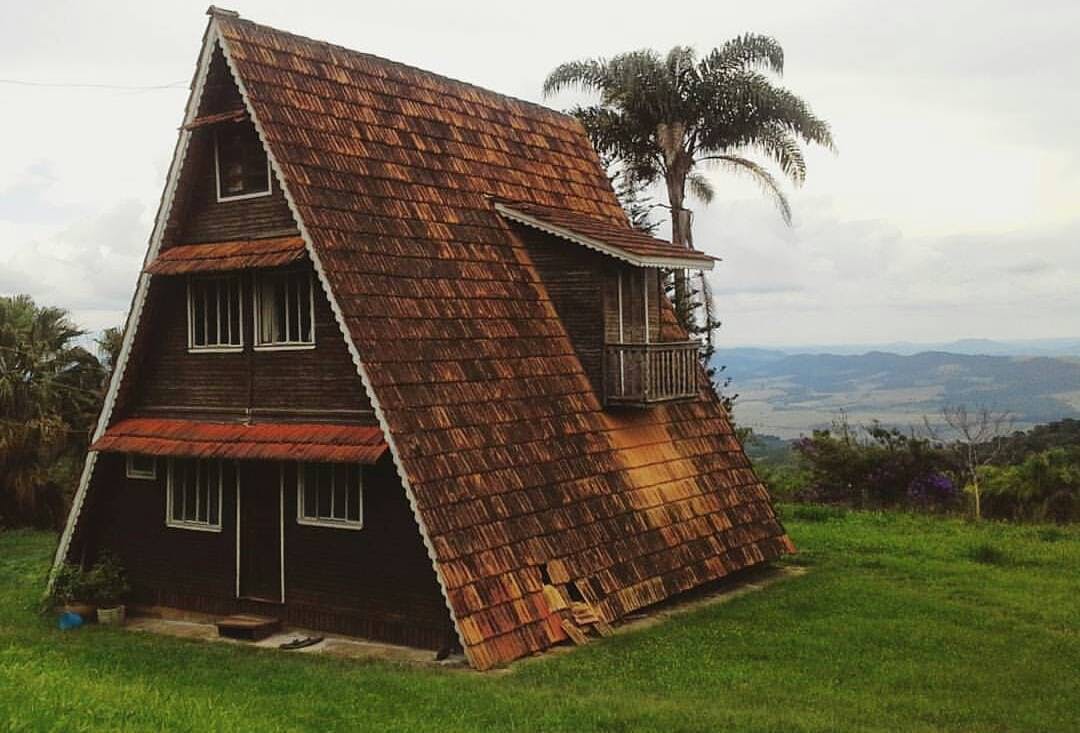 "Sure, this one may seem a bit shabby, but nothing posted on The Cabin Chronicles is what I would call polished. My feed is usually riddled with A-Frames from the Pacific Northwest, so a change of scenery to Cambuquira, Brazil, was incredibly refreshing." Photo by @neo.castro . 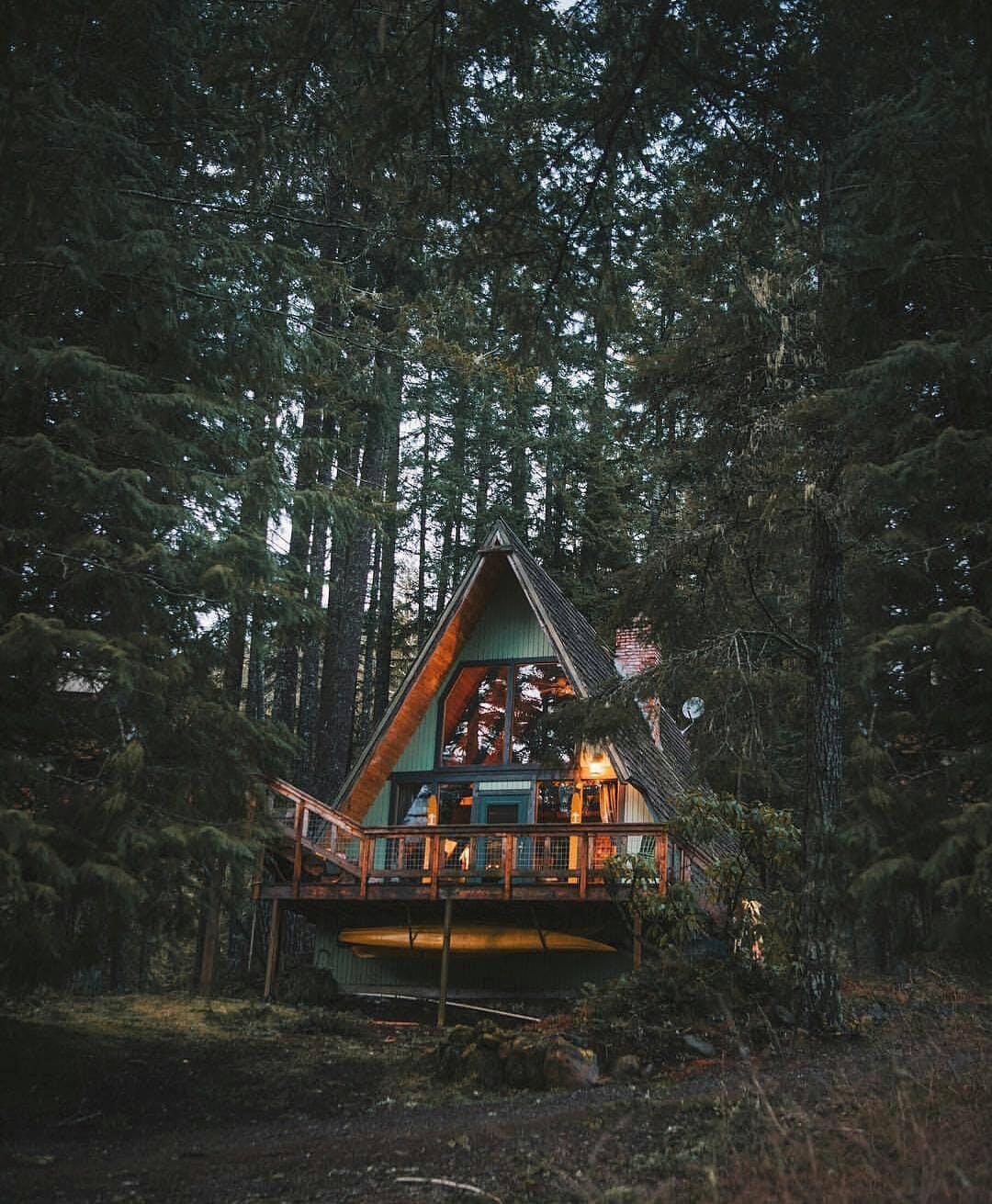 "Don't believe the name Hurricane Ridge when you hear it; that was obviously a misnomer to keep people away from the beauty of Washington. The dark deciduous forest surrounding this emerald-colored A-Frame feels peaceful, and the under-the-deck canoe storage suggests a picturesque lake is not too far away." Photo by @morganphillips. 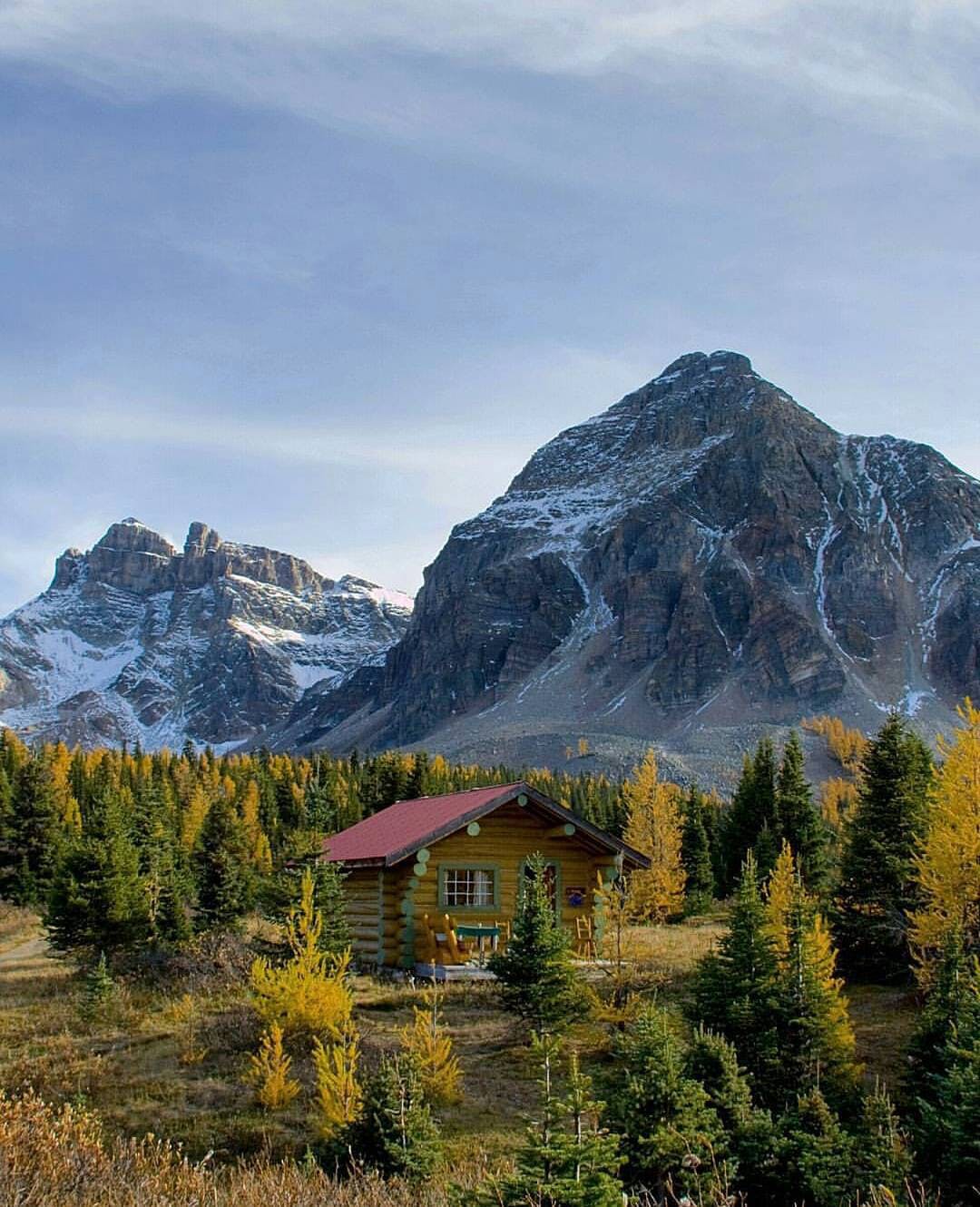 "The name Mt. Assiniboine might elicit a few giggles, but once you are struck by the grandeur surrounding this log cabin nestled in the Great Divide (on the border of British Columbia and Alberta) the laughter will quickly die down." Photo by @coloradowanders. 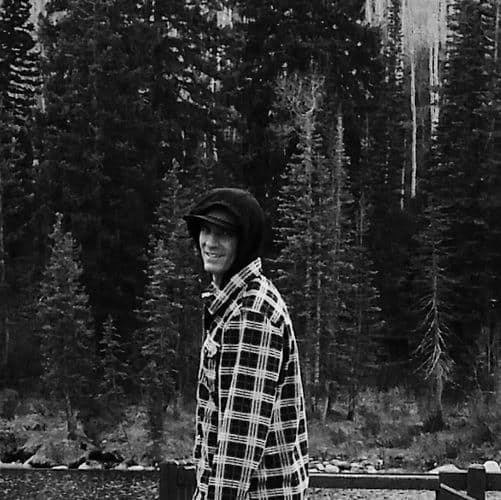 JJ Eggers is a writer, lazy artist, volunteer to youth, and a self-proclaimed cabin connoisseur.
He's the man behind the Cabin Chronicles Instagram and Tumblr accounts.

A Q&A with Andrew Groves...