Think you need a sprinter van to hit the road? Think again. Fresh Off the Grid proves that the best adventuremobile is the one you already own

n On the Road, Jack Kerouac crisscrossed North America in a ’49 Hudson Commodore, a vehicle that’s virtually 50 percent engine and 50 percent passenger space. In The Way of the World, Nicolas Bouvier traveled from Switzerland to Afghanistan in a Fiat Topolino, a car so small no self-respecting Shriner would dare be seen in one. Long before there were Westfalias, Sprinters, and Sportsmobiles, there were just automobiles. These cars weren't specifically designed for long-term travel — they didn’t have pop-roofs, built-in kitchenettes, or auxiliary power systems. They were ordinary everyday vehicles on extraordinary journeys. And that’s what made it an adventure. 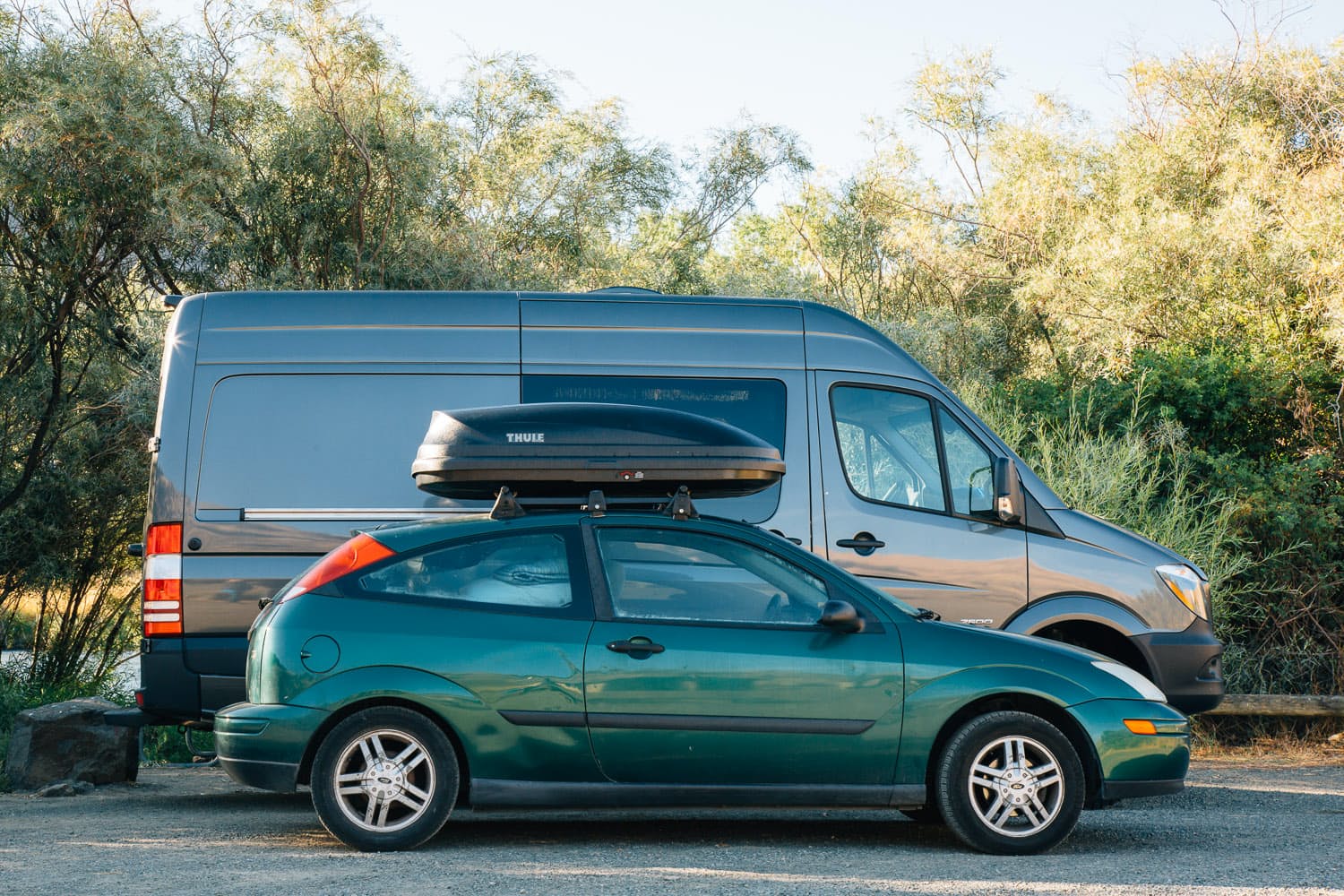 The Instagram-fueled #vanlife movement is reshaping the way our generation thinks about travel and has produced some interesting side effects. The steady stream of tricked-out vans and custom-built rigs have sparked the desire to travel in countless individuals, but it has also placed tremendous emphasis on the vehicle. Somehow the liberating experience of travel has gotten conflated with a very peculiar form of vehicular fetishism. Now, when somebody says they’re going on a yearlong road trip, the first thing people ask isn't where are you going to visit?, it's what are you going to do it in? 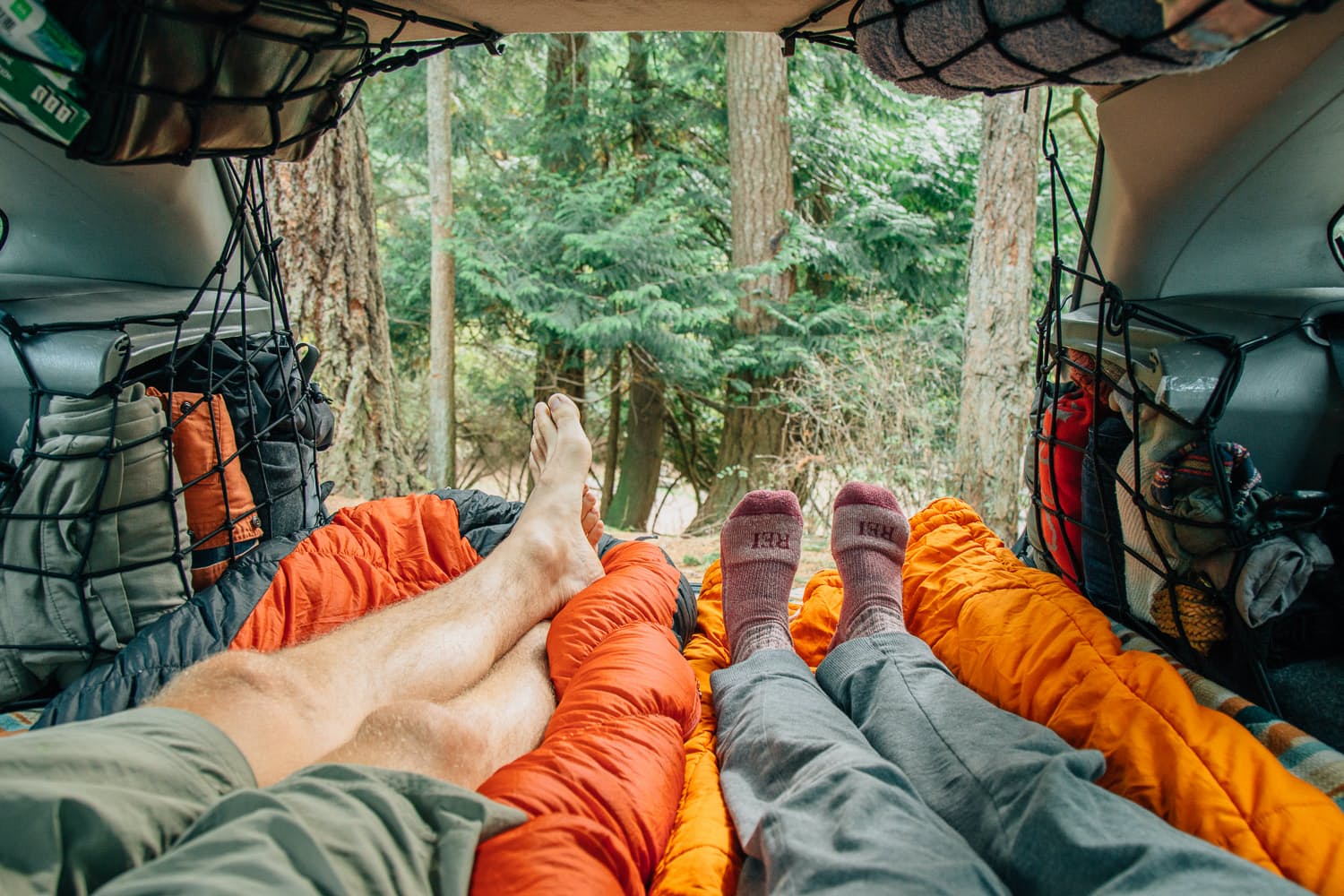 For the vast majority of people, this presents a problem. Few of us have the mechanical savvy to upkeep a 1970’s air-cooled VW van, not to mention an extra $50k lying around to buy a brand new Mercedes diesel. Perhaps you can pick up a used painters van for cheap, but the miles per gallon will eventually eat into the savings. And then there’s the build-out, all the custom add-ons and upgrades needed to transform it into a true adventuremobile: the platform bed, cabinets, solar panels, extra batteries, and engine-powered water heater. At this point, anyone without a trust fund will seize up. The cost of entry is too high, the financial commitment too great, especially if you’re planning on leaving your job. So instead, most of us just let out a soft sigh and double tap to like and move on. The dream gets deferred; life continues unchanged. 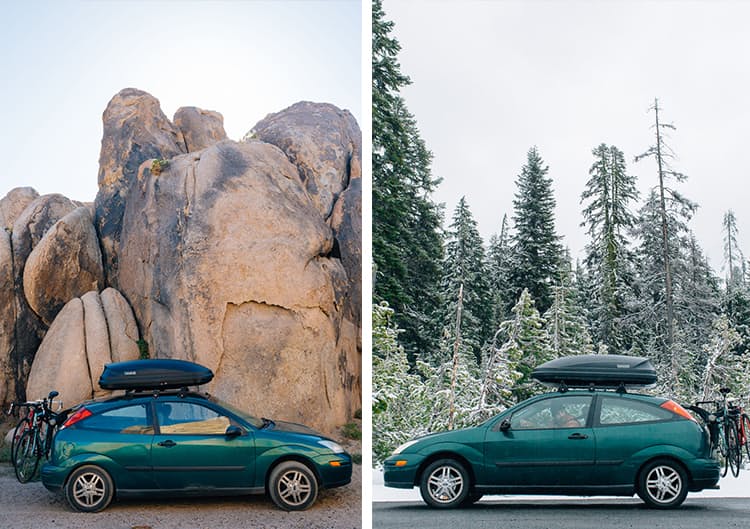 This was me for the past few years. Again and again I would be struck by the overwhelming urge to go on a big, indefinite road trip, but never felt I could afford “the van.” I was caught in an vicious and idiotic circle: in order to quit my job and go travel, I needed a van. In order to get the van, I needed to stay at my job so I could keep saving money. Years would pass, money would be saved, but I never reached a point where I felt confident enough to make the leap.

And then at some point, the obvious answer came to me: forget the van. I’ve already got a car, why not just do it in that? Traveling, new experiences, fresh perspectives — that’s what is important, not having the coolest-looking apartment on four wheels. Taking the van out of the equation removed a huge imaginary hurdle for me. I quit my job a month later and hit the road. 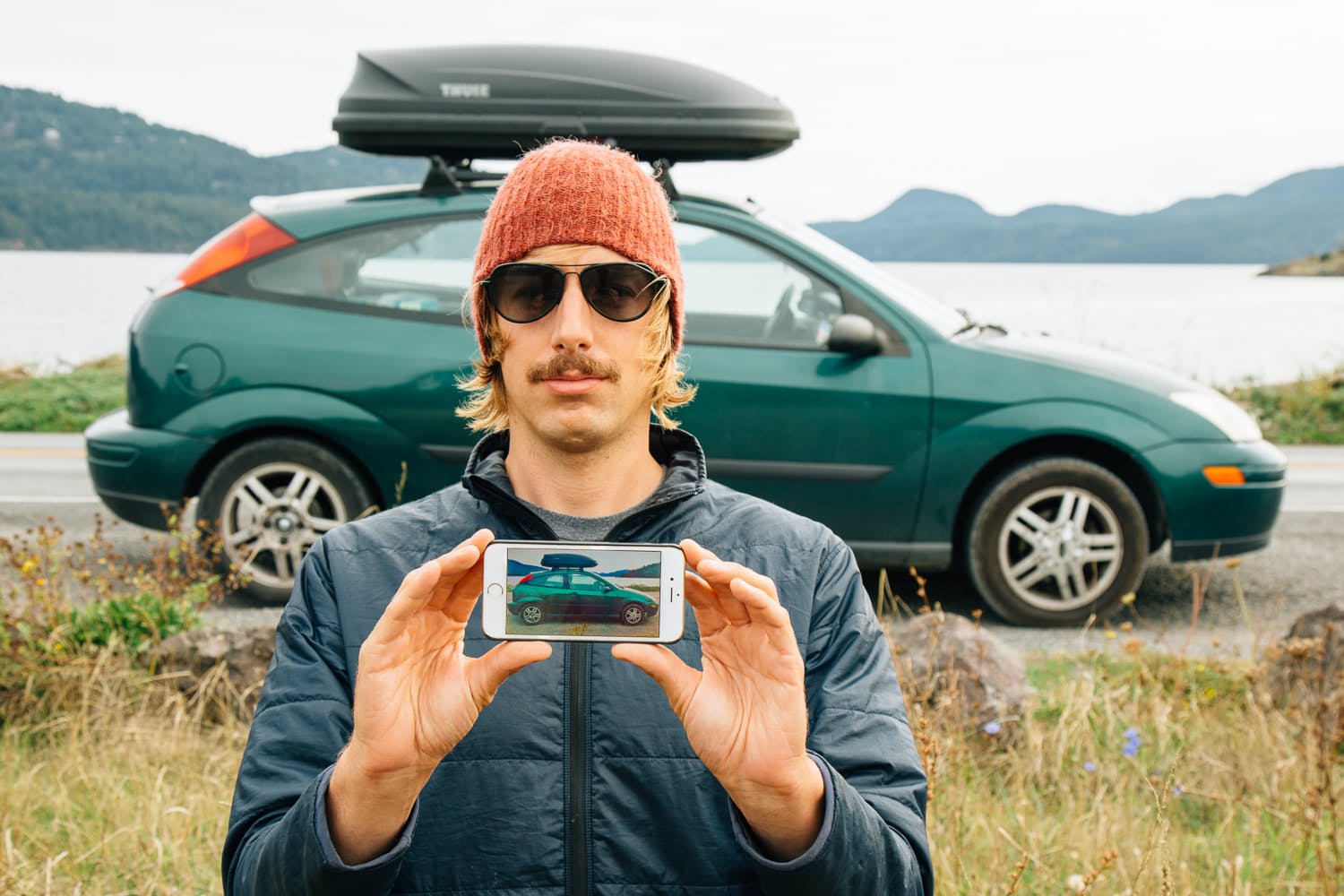 I’m currently touring North America with my girlfriend in a 2000 Ford Focus two door hatchback. I purchased this vehicle used with 87,000 miles on it. I was 17 at the time and proceeded to drive this car with reckless abandon all through my formative high school years. When I went to college, I drove it across the country. The car then spent another 10 years getting "knocked about" on the mean streets of Los Angeles. Around the time I turned 30 years old, the odometer rolled over 200,000 miles. My mechanic said it was a miracle the car was still running.

Pretty much any other vehicle would be better suited for a long road trip than this decrepit, economy-model compact, but it’s the vehicle I own. So instead of dreaming about something better, I went about making the best of what I had.

Compared to building out a van, converting your daily drive into an adventuremobile is a piece of cake and can be accomplished in a weekend. Here are some ideas to get you started. 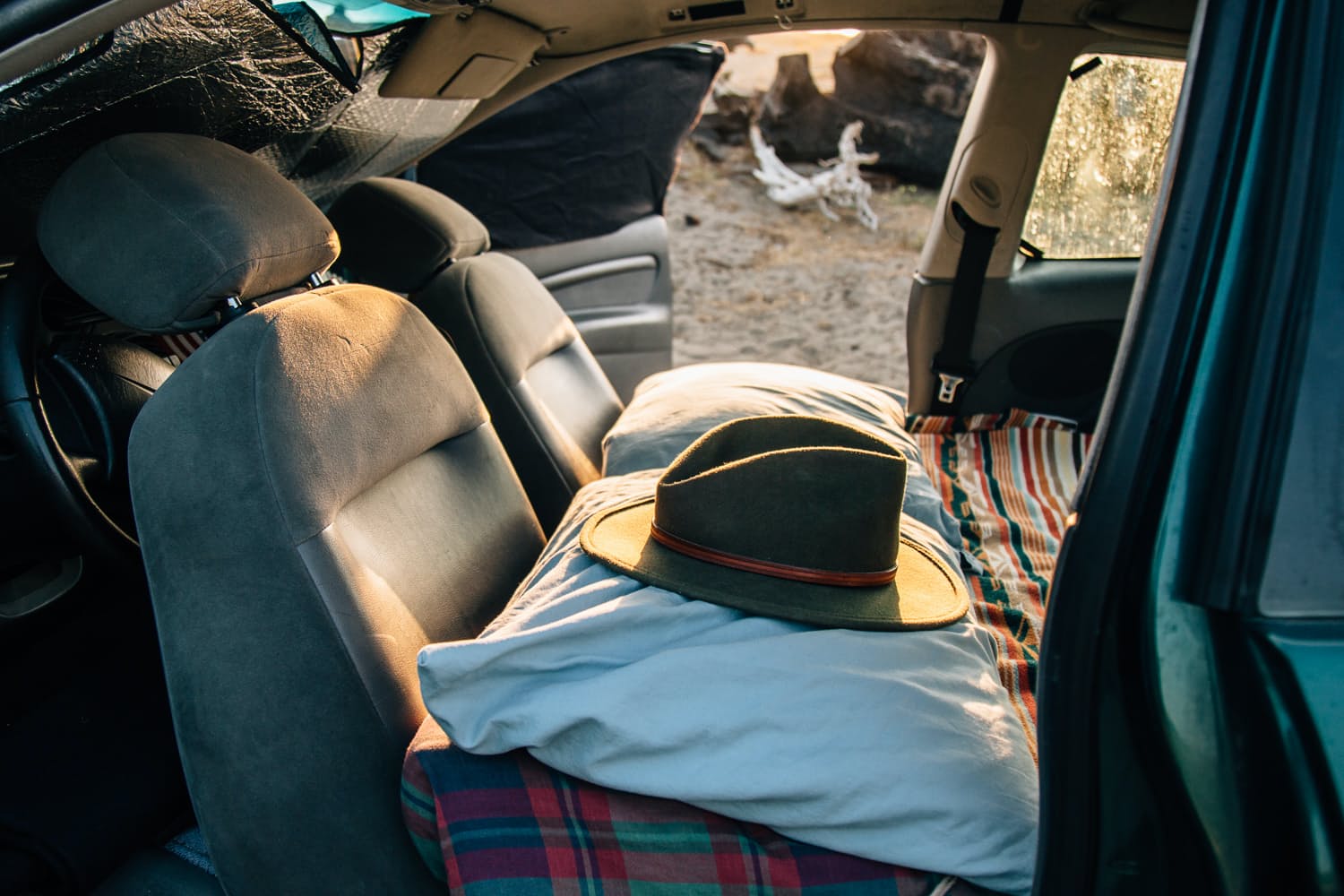 One of the core concepts of an adventuremobile is that you can sleep in it, and in order to do that you need space. So the first thing that needs to go are the back seats. Now, pretty much every modern sedan has the ability to fold down the rear seats. This is a good start, but removing them entirely is better and usually only requires a socket wrench. You’re going for maximum interior space, so start making room.

Obviously a hatchback offers the most space, but there’s no reason this approach couldn’t work for a car with a trunk. All you’re looking to do is create enough space to sleep at the end of the night, who cares if your feet are in the boot? So long as you’re not driving a Smart car, you should be able to make something work. 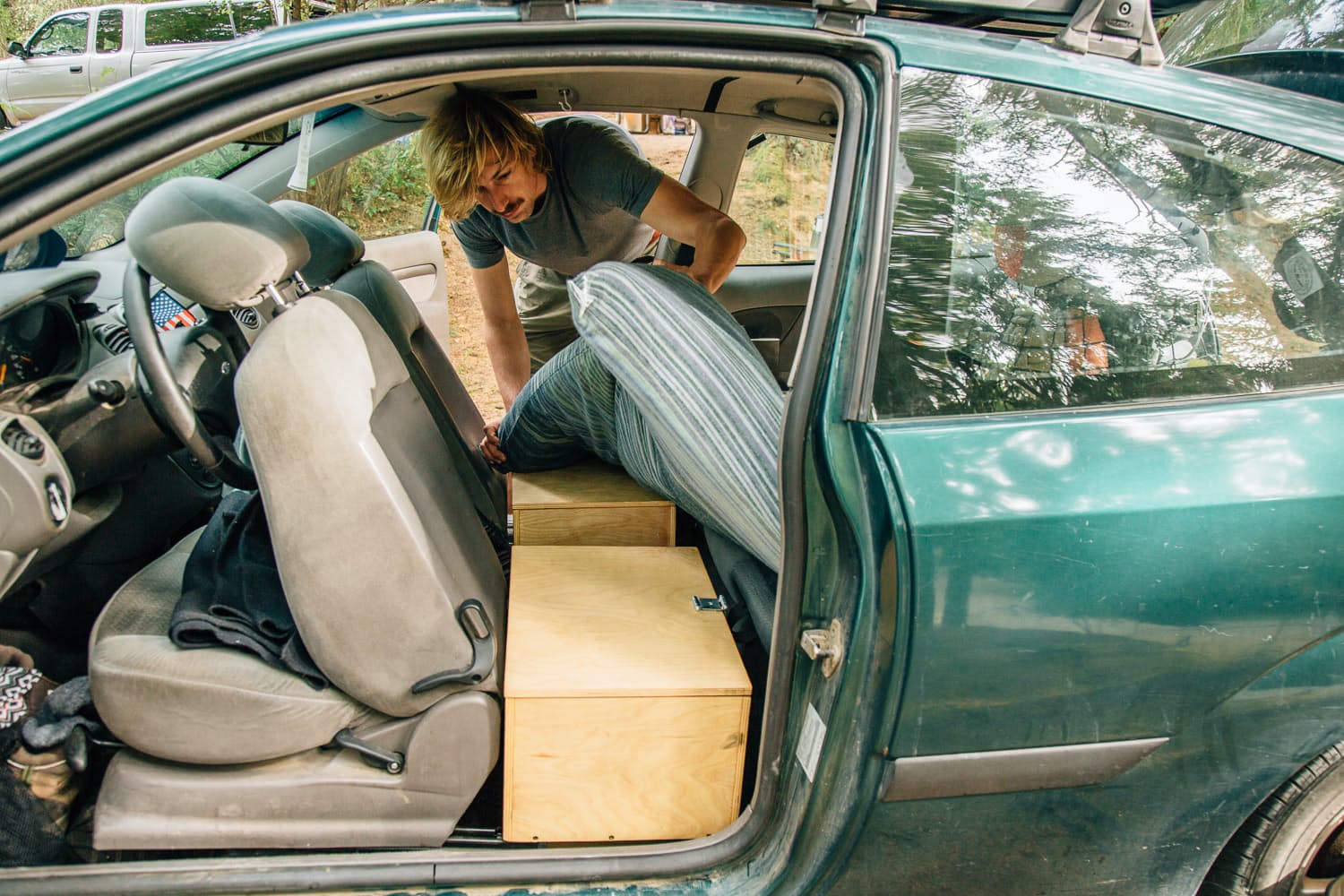 I’m 6’5” and can sleep in the back of my car with my legs fully extended. The only way this is possible is by pushing the front seats forward and placing storage boxes in the space behind them. This gets us another two feet of horizontal space, however it also means that the car is either in “Sleep Mode” or “Drive Mode”. Thankfully there are virtually zero scenarios in which one of us needs to be driving while the other is sleeping in the back.

For the longest time we were using off-the-shelf ActionPackers to fill the gap behind the front seats. Recently, we’ve upgraded to custom built wooden crates, but really anything that fills up the space (a duffel bag full of clothes, for example) will work. 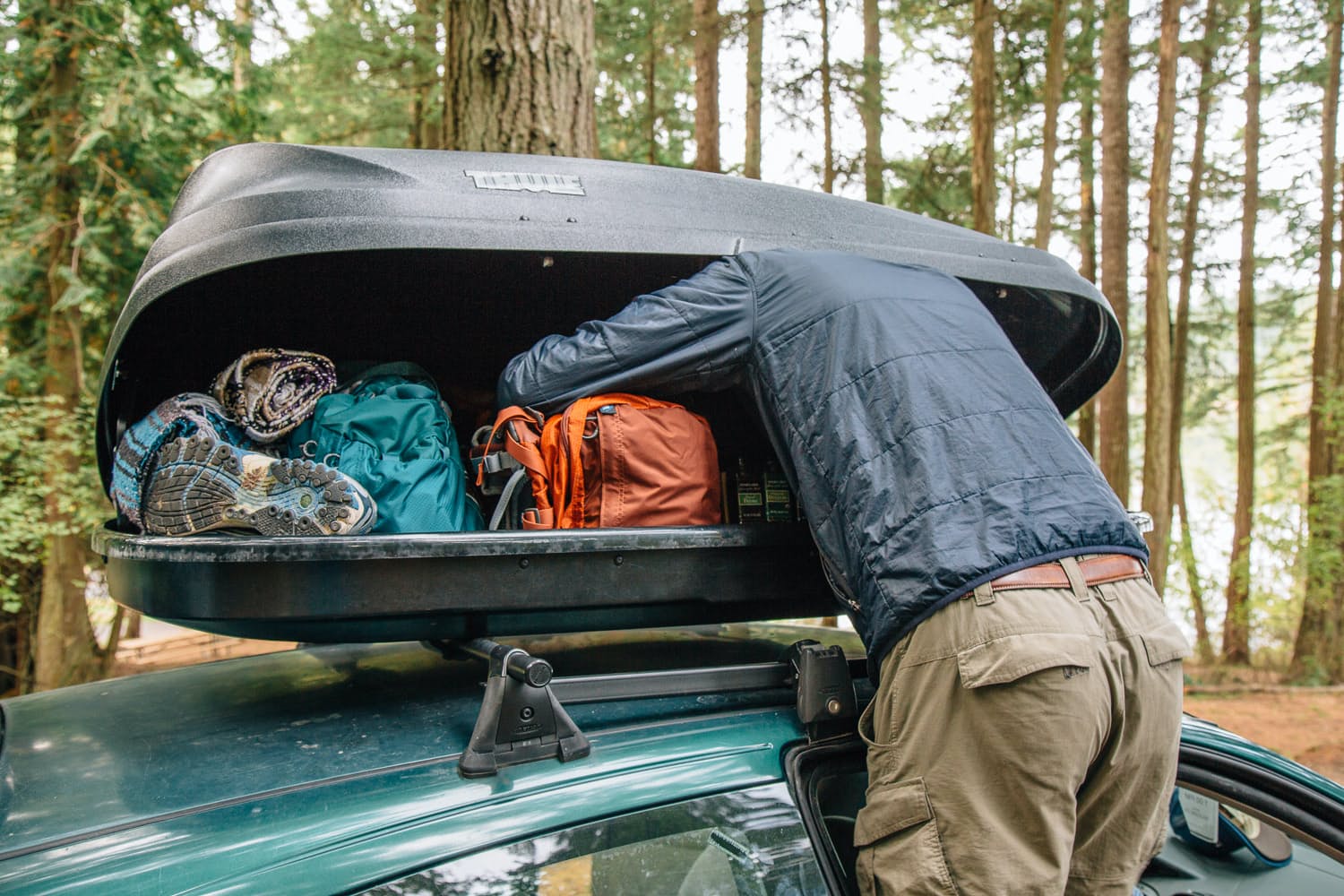 The key to increasing the livable space in any small car is to get as much of your gear outside the vehicle. This can be accomplished with a roof rack and cargo box, which can be outfitted to nearly any car. Try to get as much as you can up into the cargo box (or upstairs, as we call it) and keep only the everyday essentials inside the vehicle. Not only does this keep your sleeping space clear, but it reduces the visual appeal to smash and grab thieves. 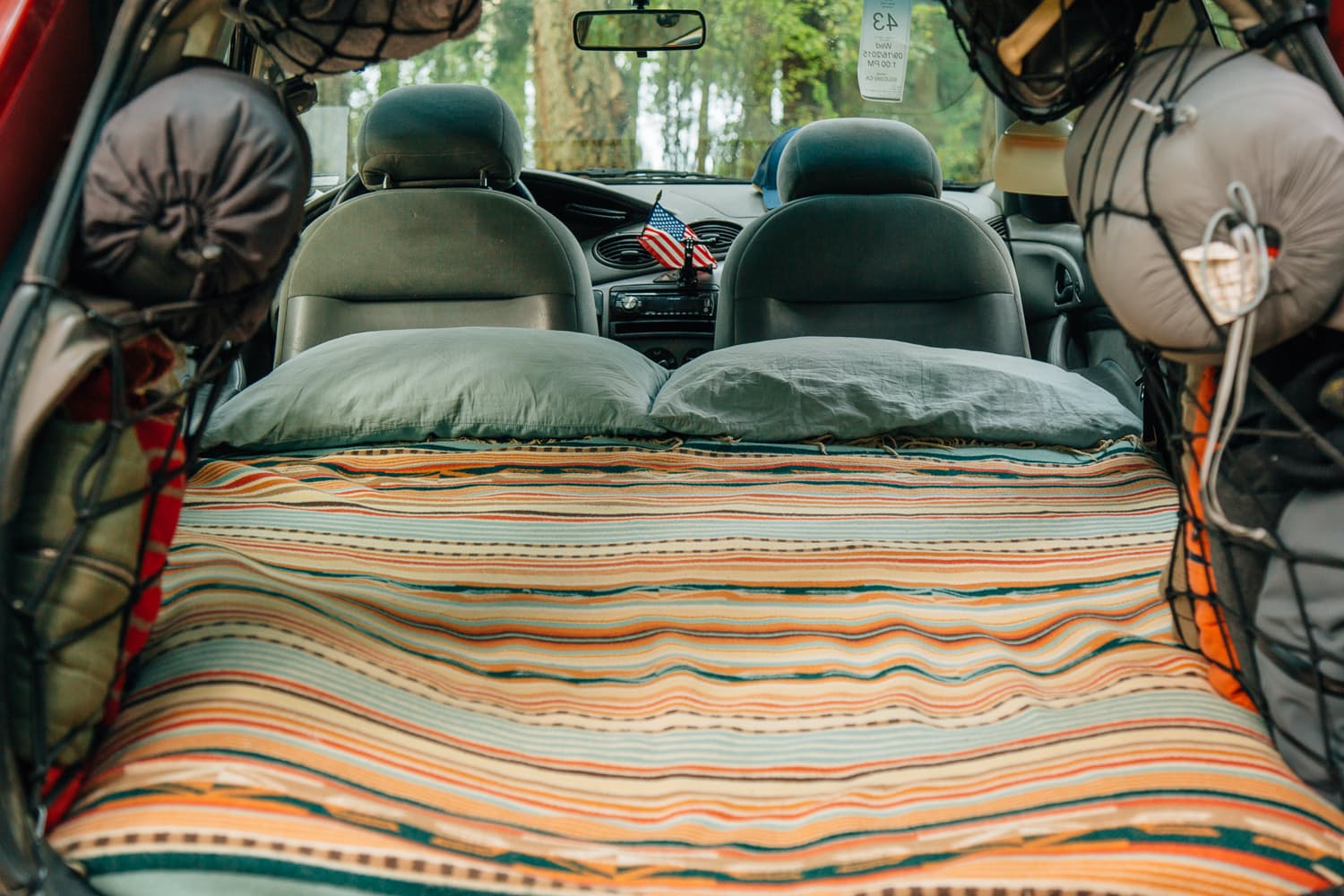 At first we were using lightweight blowup mattresses inside the car, which were tedious to set up and miserable to sleep on. Then we switched to a foam mattress from Ikea and we never looked back.

The best thing about using a foam mattress is that it can be easily cut with a pair of scissors to fit inside the specific dimensions of your vehicle. Even if it isn’t a perfect fit in some places, it can compressed to fit just about anywhere. 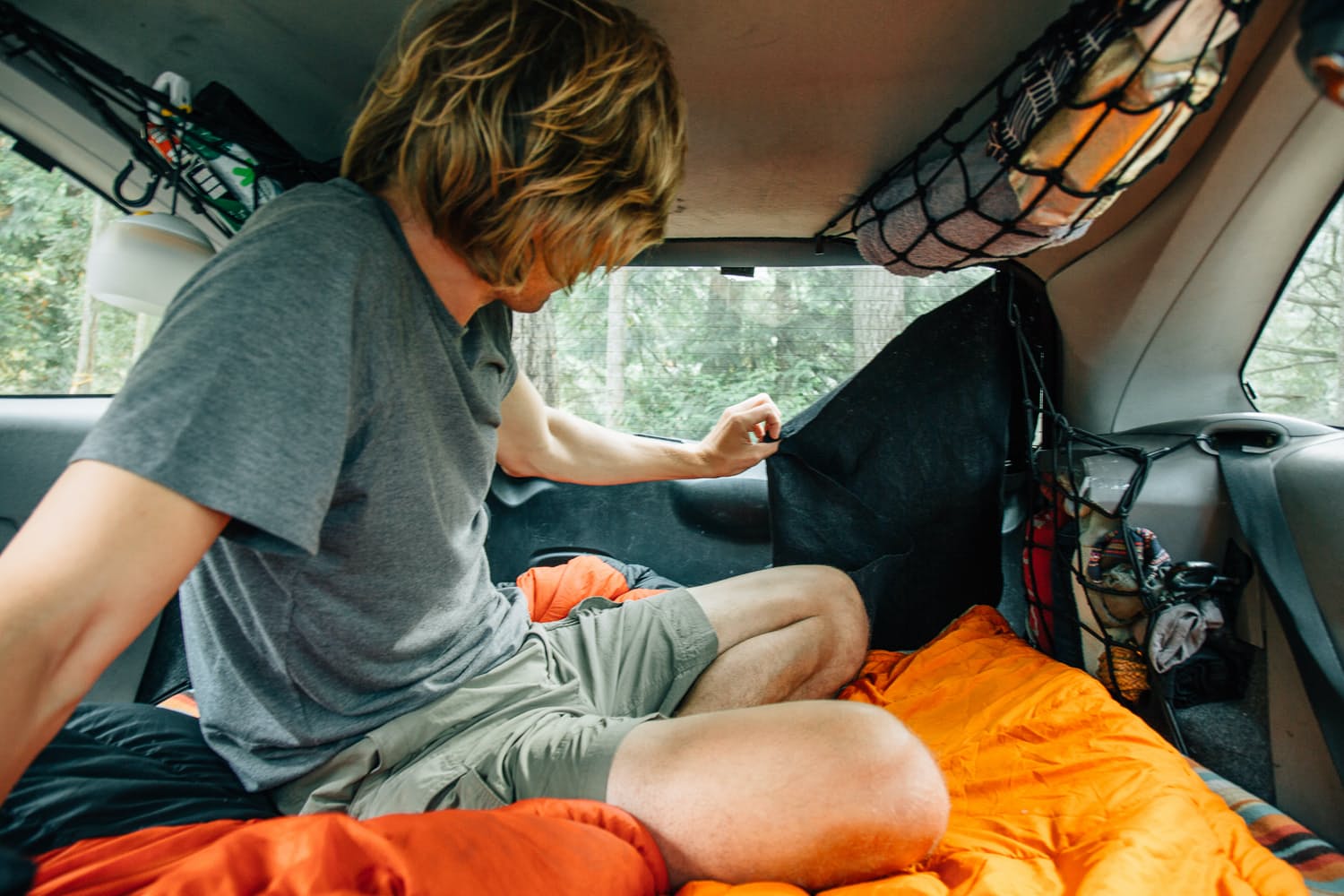 If you’ve already got fully tinted back windows, great. If not, fashion yourself some velcro felt panels to give yourself a little privacy. Felt doesn’t need to have its edges hemmed when cut, making it incredibly easy to work with. We tried a bunch of different methods of getting the velcro tabs to stick to the felt, but found that a well placed staple or two works best. 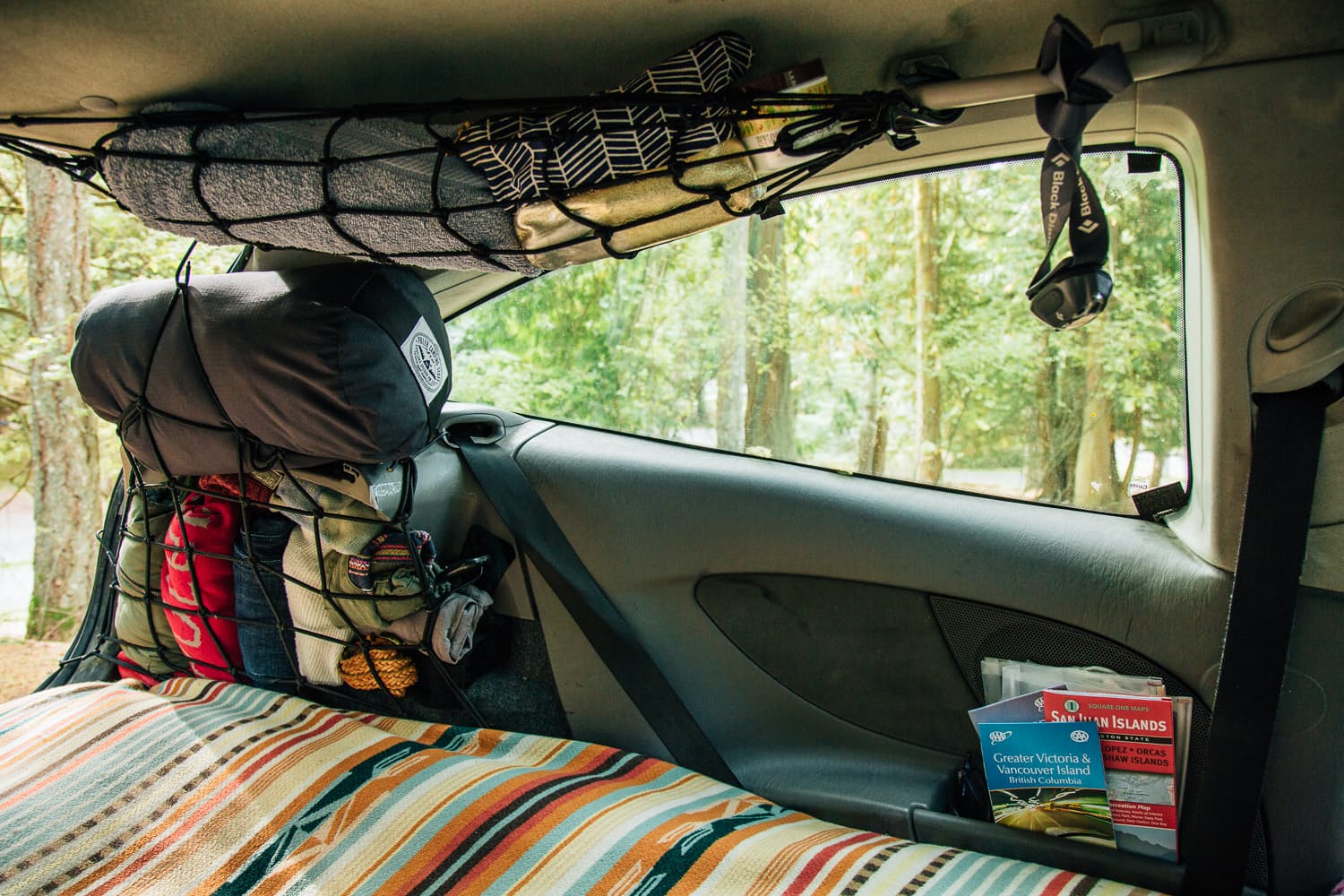 Reducing your in-vehicle items is the first step, and keeping them organized is the never-ending challenge. Elastic spider web mesh nets can be of tremendous assistance in this department. They can attach just about anywhere, keeps items out of the way, and allows you see where you’ve placed everything. We’ve got two on the ceiling and two over the rear wheel wells, keeping our bed area clear. 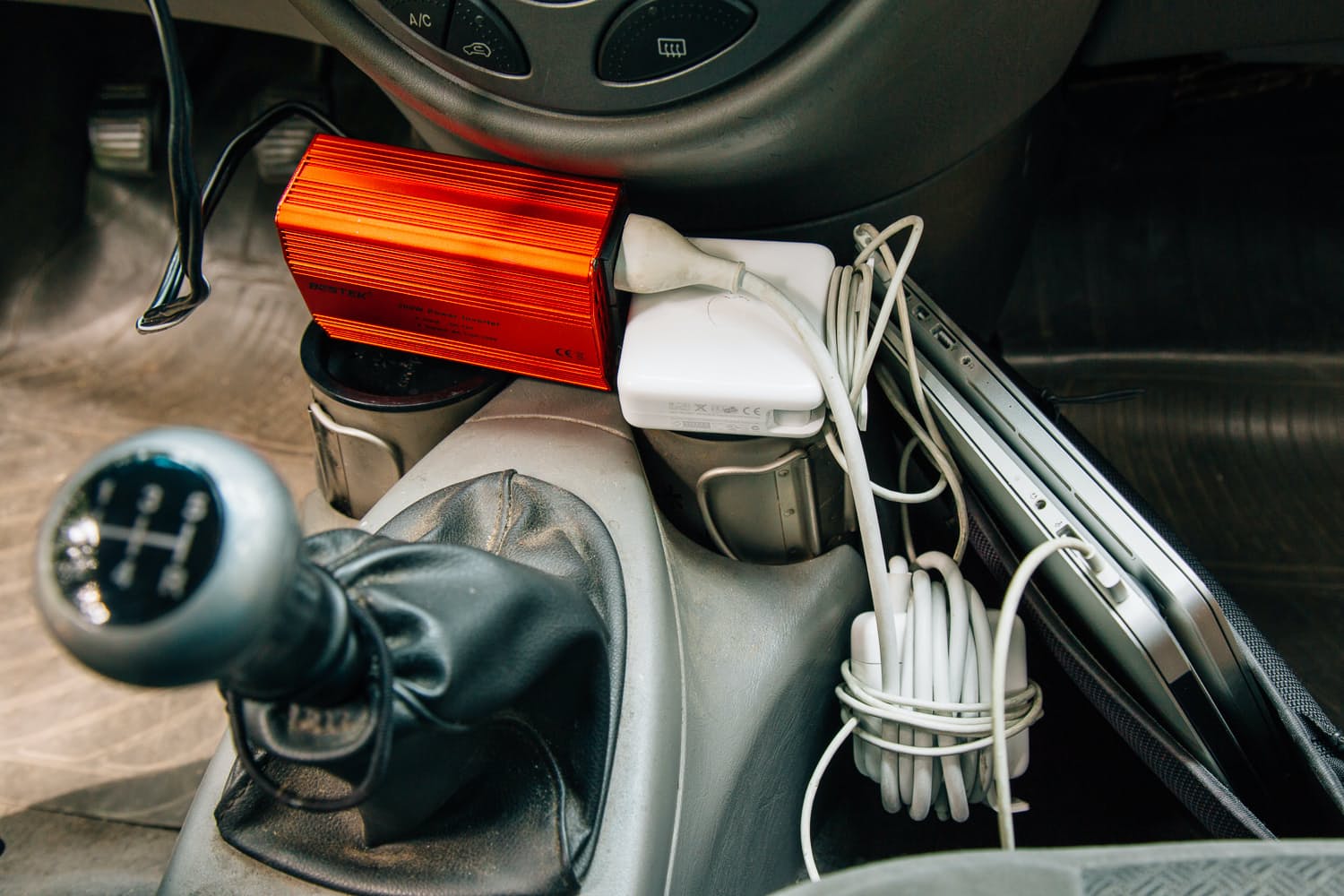 In today’s world, nobody actually goes "off the grid"; they just make their own personal grid. Cameras, cellphones, laptops, and everything else with an on/off switch needs to be recharged at some point and benevolent coffee shops are more rare than you think, so it’s best to be able to make your own power.

We purchased an inverter box for our 12v cigarette lighter, which allows us to charge two laptops and two cellphones at once. Since we don’t have a separate reserve battery, it’s critical the car be running otherwise we’d drain the only spark we have. We can get everything charged up, from 0% to 100%, in less than a hour. 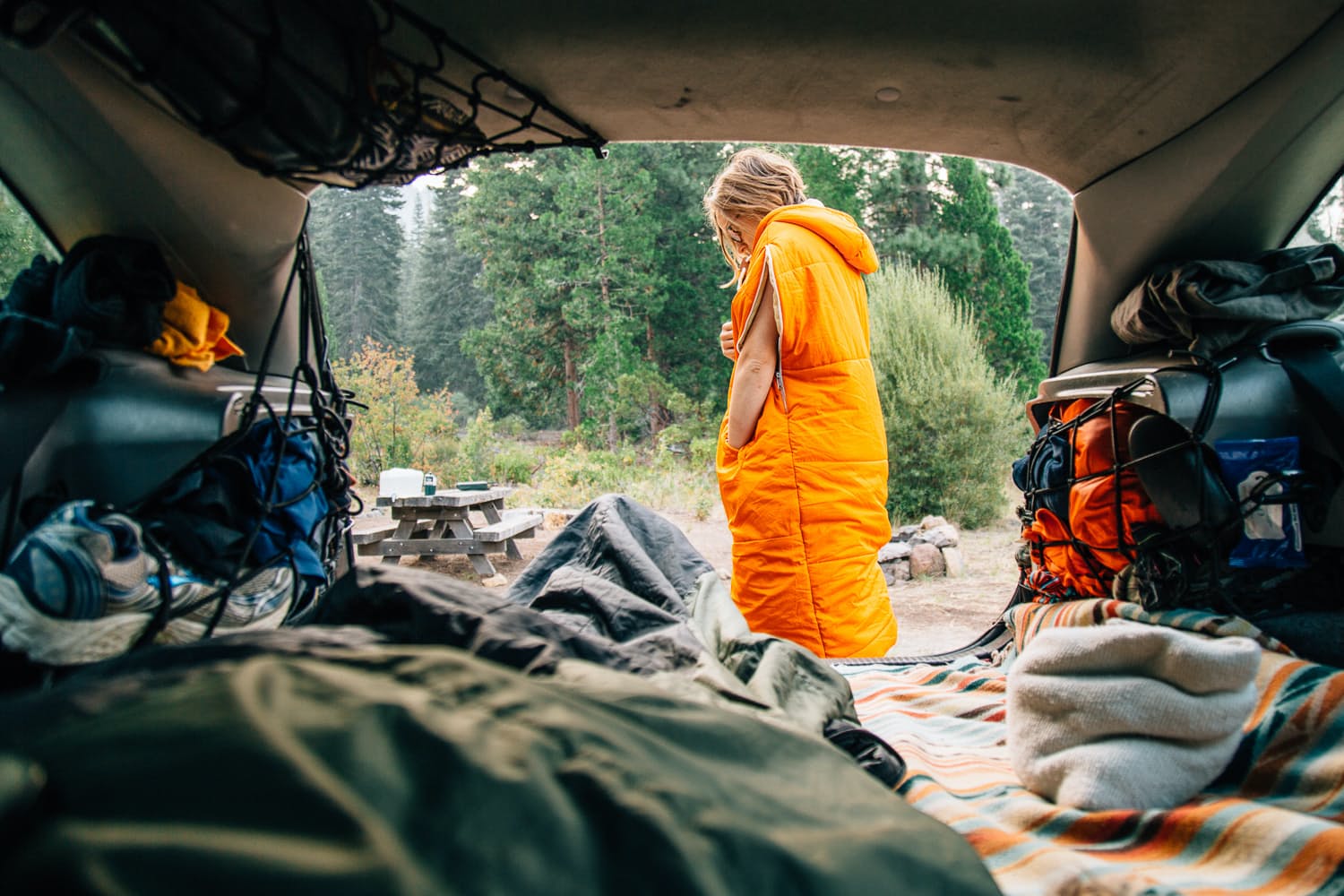 What’s great about converting a compact car versus doing a custom build on a van is that it forces you to focus on solutions rather than fixating on ideals. There’s nobody out there for you to compare yourself against. For your particular make and model vehicle, you’ll probably be the first person to do something like this. Nothing needs to be perfect; it just needs to work for you. Arriving at this state of mind can be very empowering and be the difference between wanting to start and actually starting. 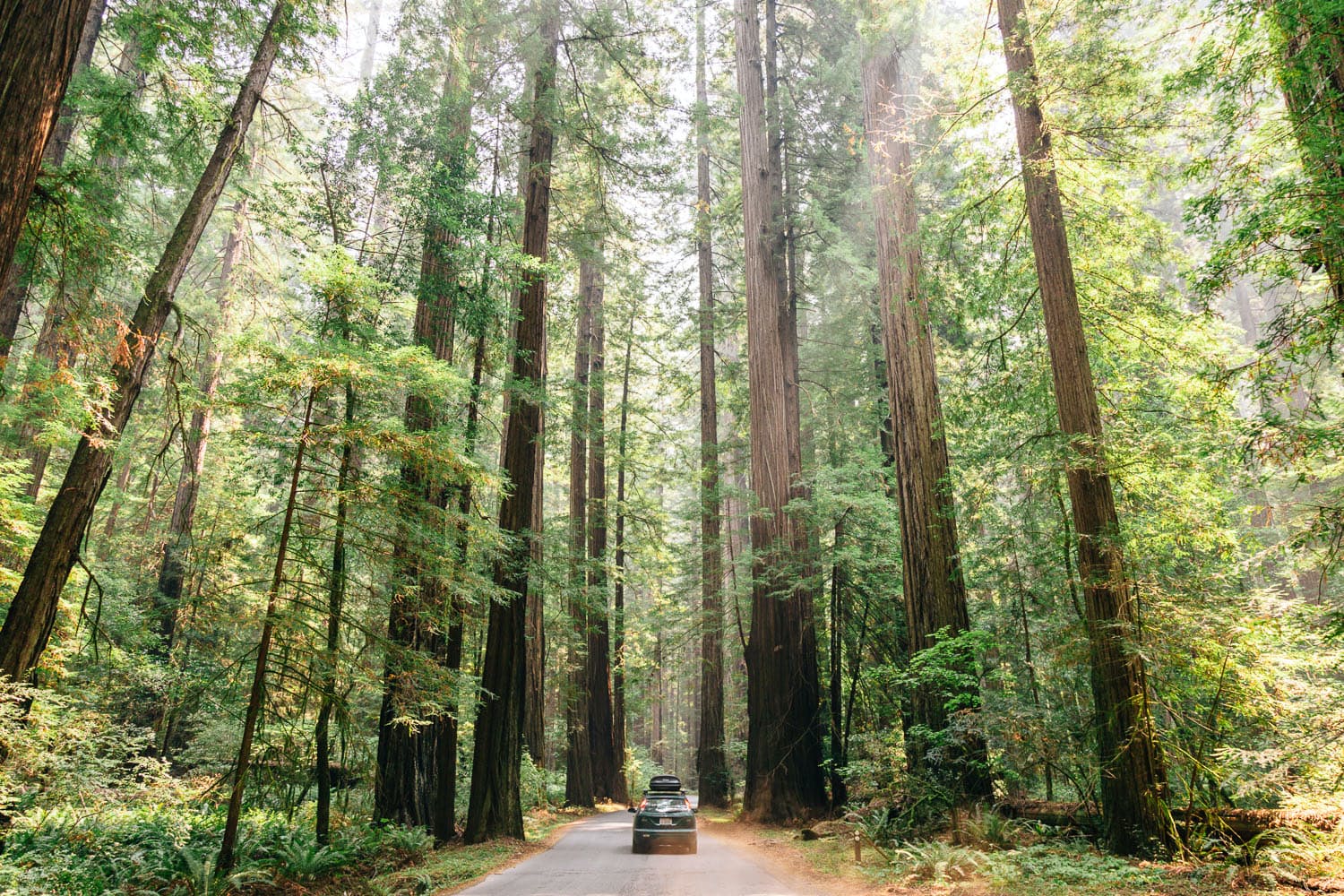 So my advice would be: if you want to get the van, get the van. If you want to do a full build-out on it and convert it into something incredible, then by all means go for it. But know that you don’t have to. If you want to travel, then all you need to do is get in your car and drive. [H]

Michael van Vliet is one half of the team at Fresh Off the Grid, a camp cooking blog.
They feature recipes specifically designed for cooking in the outdoors, written on the road as he and his girlfriend travel the United States.
Find them online or on Instagram.