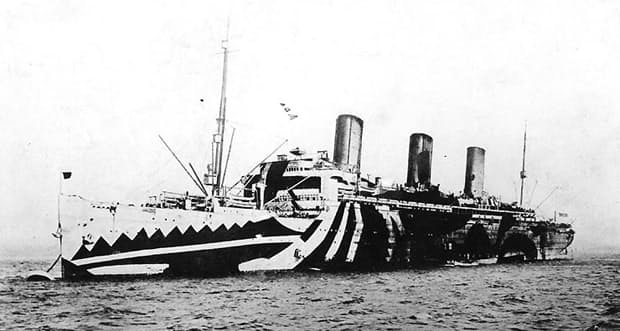 No, this isn't a new Gobstopper flavor from Willy Wonka or a name of a wild 1970's disco in Miami. Dazzle Camouflage is an innovative and controversial technique used by the British and US warships in World War I and into World War II. Not only was the name a bit odd (also known as "Dazzle Camouflage" or "Dazzle Painting"), the principal behind it was just as strange.

When you think camouflage, you normally imagine a set of colors or patterns that help conceal the object to which it is applied. Snipers wear natural-colored camo to match their surroundings, making them nearly impossible to spot, even in a flat field with a single shrub or two. Not here. Razzle Dazzle is quite the contrary. 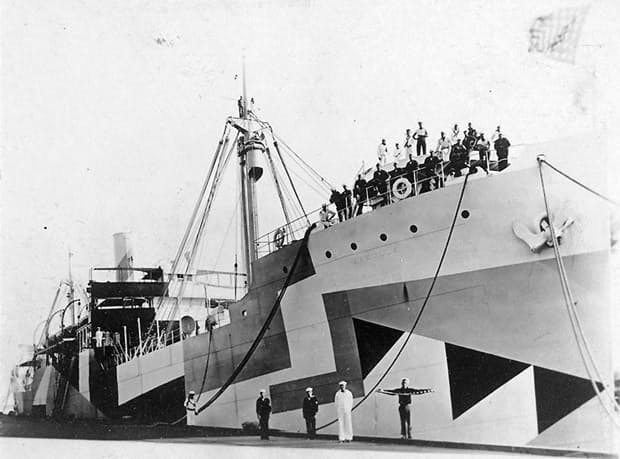 The problem with ocean camo is, well, the ocean isn't a single color. It varies from different factors, like weather, time of day, depth, and the water itself. So a single shade and/or mixture of gray or blue/green simply doesn’t work.

Razzle Dazzle Camouflage actually, counter-intuitively, makes ships more visible. Oddly, it works by boldly drawing attention, rather than hiding.  However, due to the complex patterns of geometric shapes and bold contrasting colors, which interrupt and intersect each other, it was intended to simply mislead the enemy. 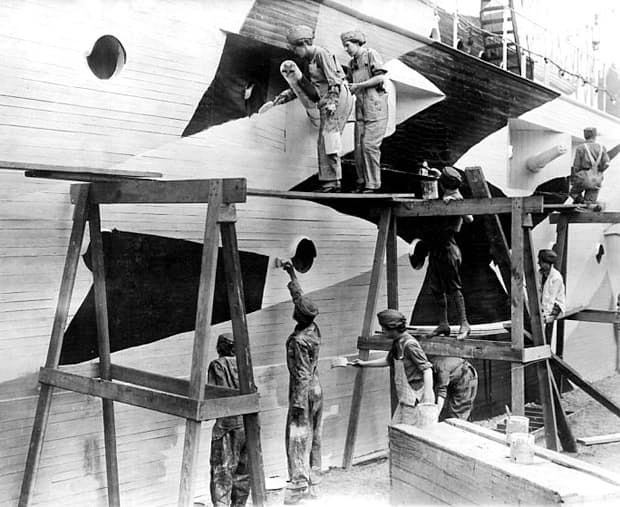 Though no color photos of these ships exist due to the photography equipment of the time, the colors used were primarily black, white, blue, green, and sometimes neons. When a German submarine spotted one of these flamboyant warships in their primitive rangefinders, it became extremely difficult to judge the speed and heading of the vessel's course.

This made it nearly impossible to accurately make a successful torpedo hit, which were mathematically computed (by human) using factors of speed and course. Additionally, Razzle Dazzle Camo blurred the size, class or type of ship, which otherwise would be recognizable if painted in one solid color (this prevented the enemy from prioritizing their targets).

The wild camouflage was credited to British artist, Norman Wilkinson (1878-1971). His concept was adopted by John Graham Kerr, a Unionist Member of Parliament. Mr. Kerr outlined and proposed this radical  idea in a letter to Winston Churchill in 1914, It is essential to break up the regularity of outline and this can be easily effected by strongly contrasting shades ... a giraffe or zebra or jaguar looks extraordinarily conspicuous in a museum but in nature, especially when moving is wonderfully difficult to pick up.

Kerr's letter was so compelling, Churchill quickly made a general order to the British fleet in November 1914, which advocated the use of Dazzle Camouflage. Following this directive and it's success, the US Navy jumped on board, borrowing the technique from the Crown.

Though the camo was a massive aid in both World War I and World War II, it inevitably became obsolete as the technology of war developed, such as rangefinders, radar, and aircraft targeting systems. However, it still gave the Germany U-boats plenty of hassle, and frequently led to them giving up their positions to the Allied naval vessels.

In total, Razzle Dazzle was applied to over 2,000 warships and 4,000 British merchant ships. It’s still used today, as it’s frequently painted on car prototypes to prevent preying eyes from getting a clear view of the car's lines/shapes via photo leaks. The Razzle dazzles on. 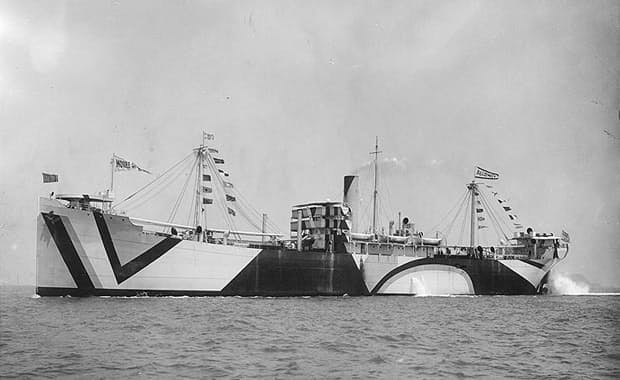 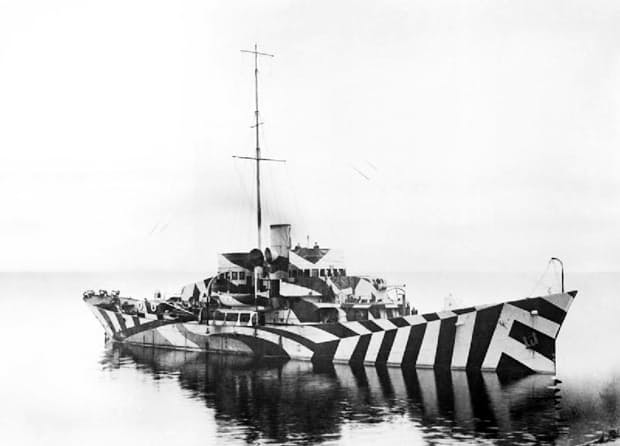 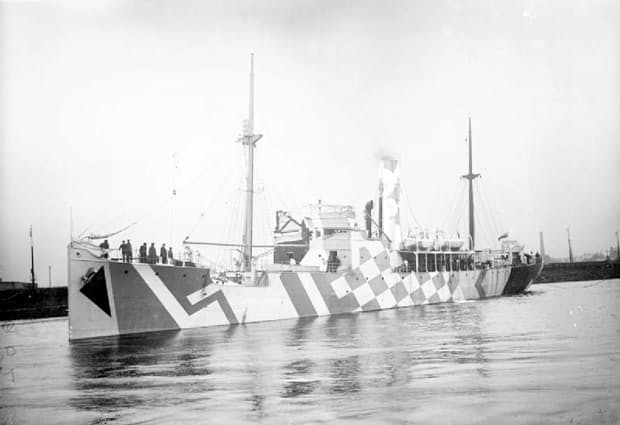 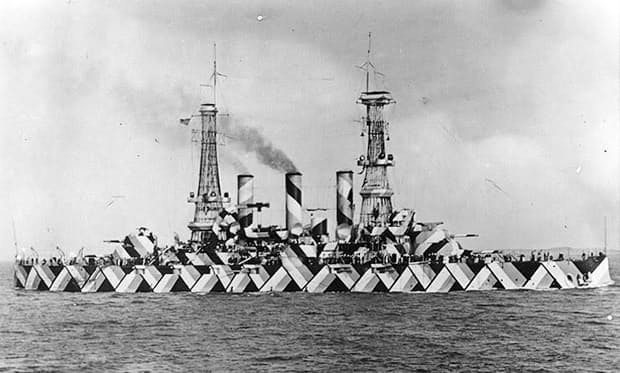 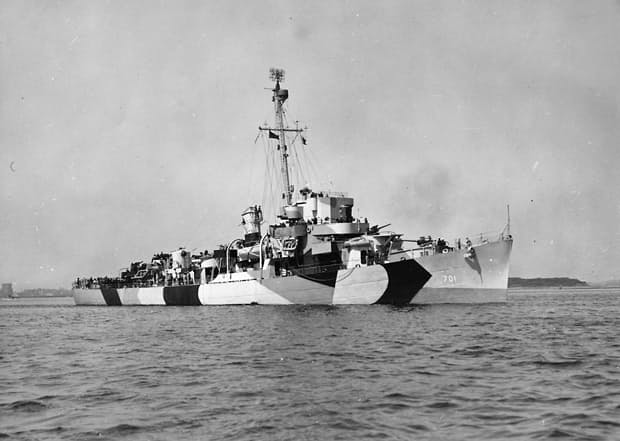 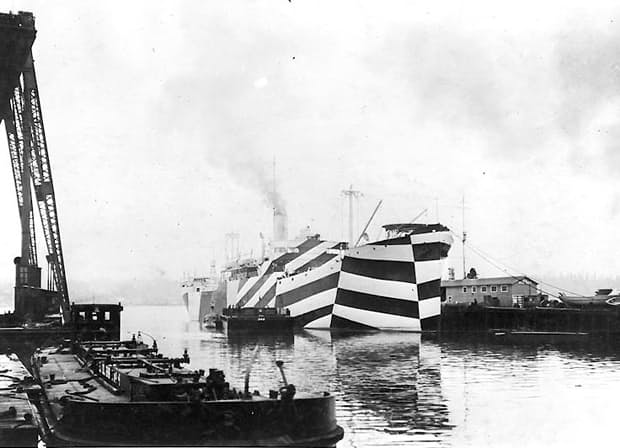 For a video on Dazzle Painting, visit YouTube. Or for further reading, see Amazon.