For the perfect summer cookout, take a leaf out of A Southern Gentleman's Kitchen and whip up a mess of Ernest's smoked ribs

It's not every day that we find a cookbook that caters so aptly to our appetites for grilled meat and southern fare, which is why we were stoked to get our hands on a copy of Matt Moore's A Southern Gentleman's Kitchen. Grilled Caesar salad? Why not? Hushpuppies? Yes, please. Pan-seared venison? We won't say no. But he really had us at Ernest's Smoked Ribs, which is why we're sharing this mouth-watering recipe with you — just in time for summer's last few weekends in front of the grill.

rnest is one of those proud and few folks in the South that can only be appropriately classified as “a character." Trust me; such distinction carries a high honor down here — one beyond his days of serving for our country — but one of which is only earned with age, honesty, and a bit of good humor.

During my bachelor years, Ernest became my tried and true friend to call when the weekend siren songs of Nashville's Lower Broadway called my name. A few alcohol- and bravado-fueled cab rides were all it took for me and Ernest to become fast friends – connecting on a level much beyond directions and payment options. In fact, as it turns out, Ernest – and his sidekick Snowball, a small white puppy — and I shared quite a few of the same interests when it came to fishing and food. 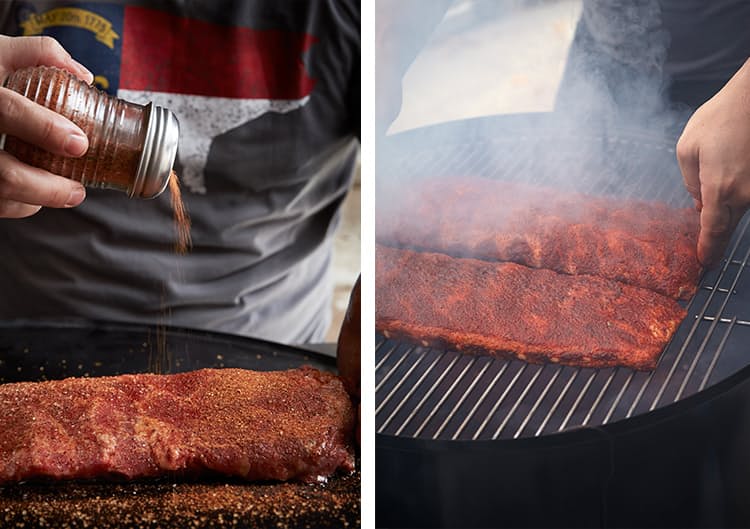 For Ernest, food is the great equalizer in our world. I first learned this lesson by being served a plate of the most delicious BBQ I’d ever eaten after asking time and time again why his cab smelled "heavenly." It turned out that Ernest had plates of his creations – BBQ, greens, sauce, etc. – just waiting for me in the back of his ride! It don’t get any better than eating pulled pork while staring at the blurred lights of Broadway. As it is, I tried it once, and as Ernest says, "Once they try it, they gonna buy it!"

Sitting in Ernest’s backyard on an early spring afternoon, just blocks away from my home, Ernest and I are jabbing at each other, as we always lovingly do, about our cooking and fishing techniques, just as much as we are respecting each other in the same manner. Ernest, a man who beat a lifetime of alcohol addiction, has come to find peace and harmony by sharing his food with others. We joke about the fact that his neighbors all have him on retainer for his BBQ’d pork shoulder, ribs, goat, venison, and turkeys. Such good food (and personality) has made Ernest a trusted neighbor – I’m certain he knows everyone by name in east Nashville – not to mention a hot-shot caterer around town. 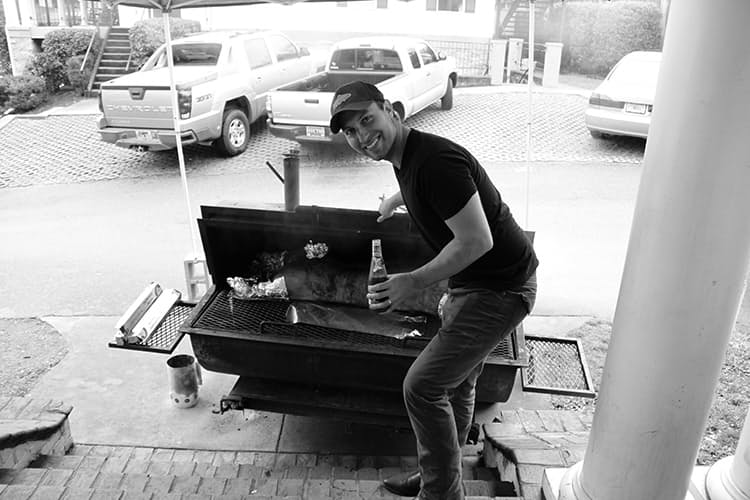 Furthermore, Ernest portrays a richness of life to the likes of which any man can admit jealousy. He shares with me that it’s a respect for others which he holds to the highest echelon of being a man in today’s South. He’s kind enough to let others “be” – but never afraid to share his passion and love for those who might be suffering or indifferent. Beyond work, cooking, and bullshitting, Ernest spends his time mentoring young African American’s at the Church of God in Nashville and beyond. He is a leading example that good fruits and food are the result of one’s passionate labor.

I’ve come to realize that Ernest has the secret to life all figured out: be kinder than necessary, without judgment or prejudice; project positivity; and always be willing to invite a stranger to the table. Try it — and I promise y’all will buy it. 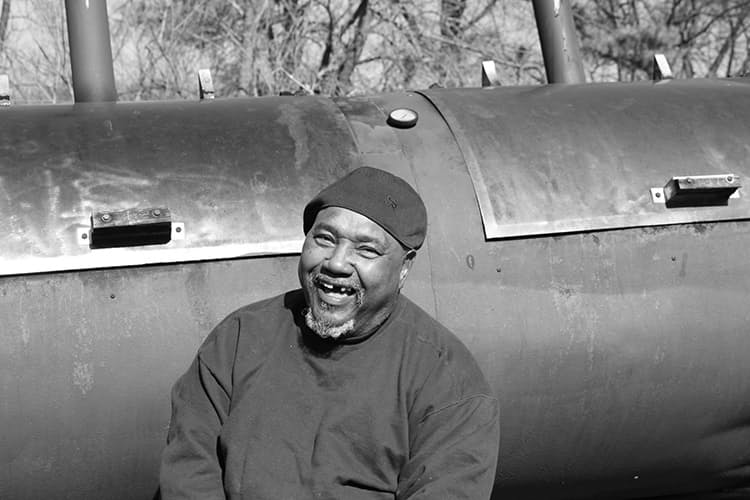 Like most BBQ experts, Ernest is pretty secretive when it comes to his exact recipe and methods, a process he’s been perfecting since the 70s. Nevertheless, I was able to get enough information out of him, while reverse-engineering my own concoction after tasting his delicious ribs. My take pays homage to Ernest’s belief that ribs should be cooked low and slow, always over indirect heat, without too much fuss when it comes to seasoning. Let the pork and process speak for itself – that’s a belief we both share. From there, I emulate Ernest’s famous habenero BBQ sauce – one that packs plenty of punch and spice to set these ribs over the top.

For the ribs:
3 racks baby back pork ribs, about 3 lbs. each
¼ cup vegetable oil 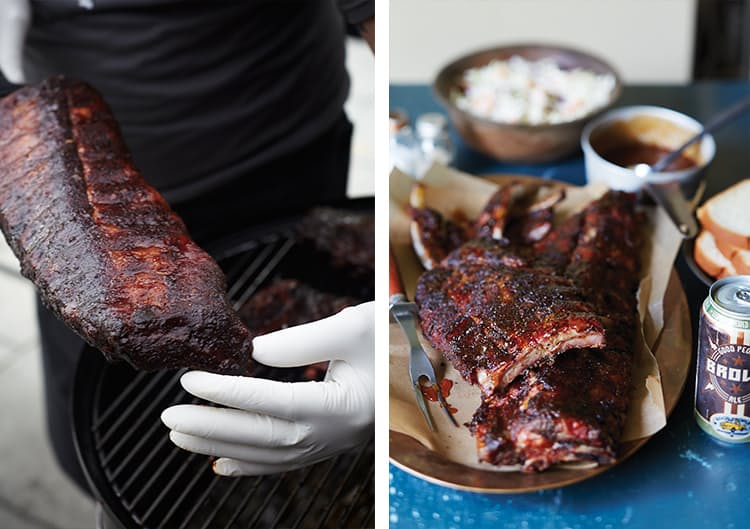 1) Prepare the dry rub by combining all ingredients into a mixing bowl. Use a fork to break apart any small clumps and mix until evenly incorporated. Set aside.

2) Next, use a paring knife to remove the thin membrane along the underside of the ribs by making a small slit between the membrane and the bones on one end. Use your hands to pick up and pull the membrane from the underside of the ribs; it should come off in one large section. Rub each rack with vegetable oil, and sprinkle both sides of each rack liberally with the dry rub. Using your hands, rub the spice rub into the meat. Place the racks onto a baking sheet, cover with foil, and place into the refrigerator for at least one hour and as long as overnight. Prior to cooking, pull the ribs from the refrigerator to come back up to room temperature, about 30 minutes.

3) Prepare a grill or smoker for indirect heating. Using a chimney starter, light approximately five pounds of lump charcoal until they are completely grayed over. Place the lit coals around the perimeter of the grill, or the side box of a smoker. Cover grill and open the top and bottom vents to allow the smoke to exit. Allow the grill to reach a heat of 225 degrees Fahrenheit.

4) Place the ribs, bone side down, on the grate and indirect from the coals. Cover grill and cook ribs, adding five pounds of prepared charcoal as needed to maintain a constant temperature of 225 degrees Fahrenheit. After 90 minutes, use tongs to lift one end of the rack, causing the rack to slightly bend in the middle, indicating the ribs are done. If the ribs do not bend, cover and continue to cook and check the ribs — using the same method until they ‘bend’ — every 20 minutes.

5) Remove ribs from heat and tent with foil to rest, about 10 minutes. To serve, cut racks into thirds by slicing between the meat and the bone. Serve with warmed sauce on the side.

6) To make the sauce, bring the first seven ingredients to a boil over medium high heat in a medium-sized stockpot. When mixture reaches a boil, reduce heat to low and simmer for 10 minutes. Use an immersion blender to pulse and puree the ingredients until very smooth, ensuring no small pieces or chunks remain. Next, add sugar and ketchup, return to medium-low and simmer, stirring on occasion until slightly thickened and combined, about 30 minutes. Serve immediately or cool and store for later use.

Grab a copy of A Southern Gentleman's Kitchen here. [H]

Matt Moore is a Nashville based writer, cook, entrepreneur, musician, and Southern Gentleman.
His work has been featured on VH1, The New York Times, Art of Manliness, Southern Living, and others.
He enjoys teaching others to cook and share great food — along with drinking cold beers with friends and strangers. Follow him on Instagram here.