PROVISIONS: BOURBON AND THE PUMPKIN SOUR 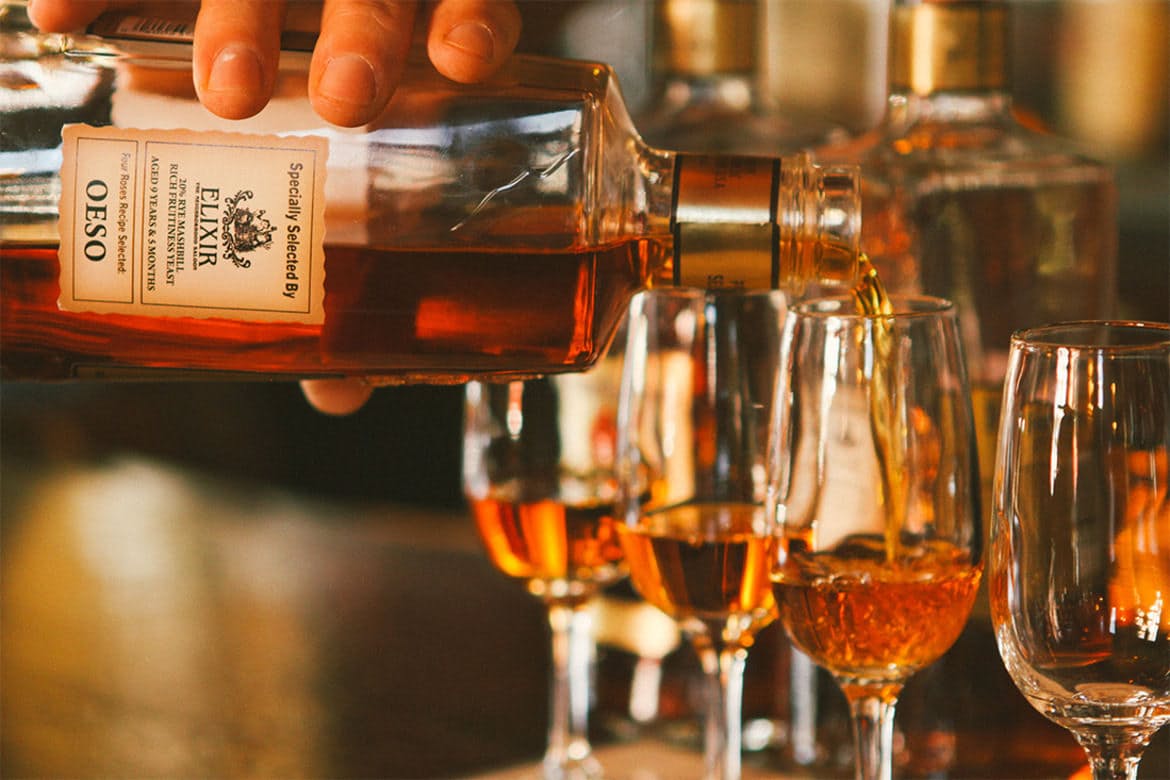 Of all the saloons in San Francisco, H. Joseph Ehrmann (he goes by H.) owns one of the most notorious. Elixir Saloon’s been serving up cocktails since 1858, and in honor of 155 years of booze, we stopped by for a taste of the sacrament.

Ehrmann, the ninth proprietor of the bar, served up Elixir’s exclusive Four Roses bourbon flight, and he mixed up a custom cocktail—The Huckberry Pumpkin Sour.

He also invited everyone (that means you, dear reader), to Elixir's Tenth Anniversary Weekend for BBQ, bourbon, beer, and a whole lot of mischief. There are two afternoon parties on November 16th and 17th, from noon on. 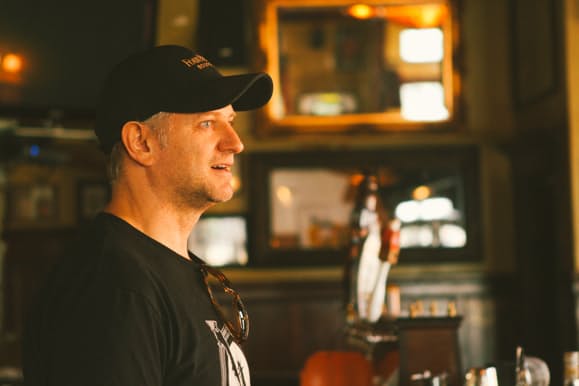 Elixir’s on both GQ’s and Esquire’s Best Bars of America list, and H. was ranked the Best Bartender in America by Nightclub & Bar. After getting his MBA, running through a host of international places, and a run in the dot com boom, Ehrmann returned to his passion—serving people quality drinks.

He’s renovated (by hand) the old saloon on Guerrero and 16th and brought it back to it’s illustrious and infamous glory. Specializing in whiskeys and tequilas, Ehrmann also mixes up a seasonal drink menu for the neighborhood. 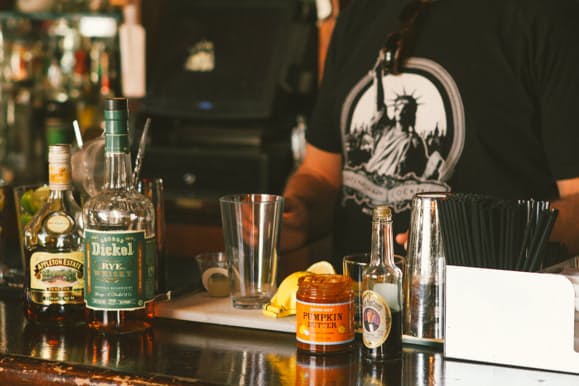 H. set us up with Elixir’s Four Roses flight, a tasting of four single barrel bourbons, all bottled specially for Elixir (check the label). For bourbon fans, it’s the holy grail—four flavors, easily compared and enjoyed next to each other. Then, H. got to some mixology.

Coming from a background as a chef, Ehrmann sees cocktails like a plate of food. He uses fresh produce and sees the cocktail as a way to highlight and heighten a good liquor, rather than dilute its flavor. 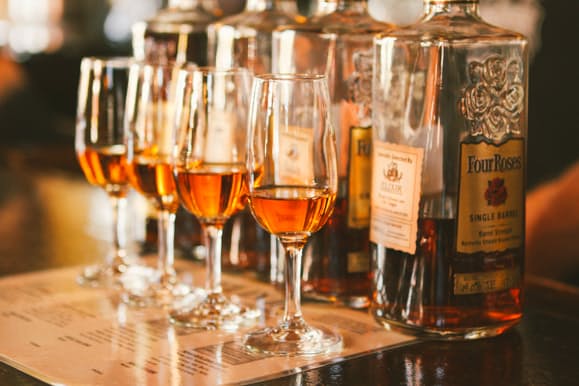 We’re proud to introduce The Huckberry Pumpkin Sour, something tasty to keep you warm through the winter.

It’s got the base flavor of the pumpkin butter, but still comes across with the Rye Whiskey forward. Topped with some grated nutmeg, it lets the flavors of the season all rush across your palate. Enjoy frequently. 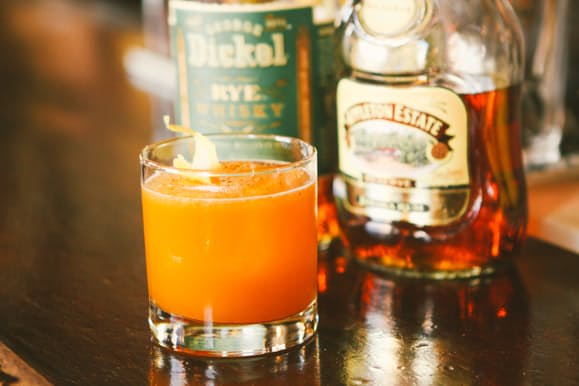 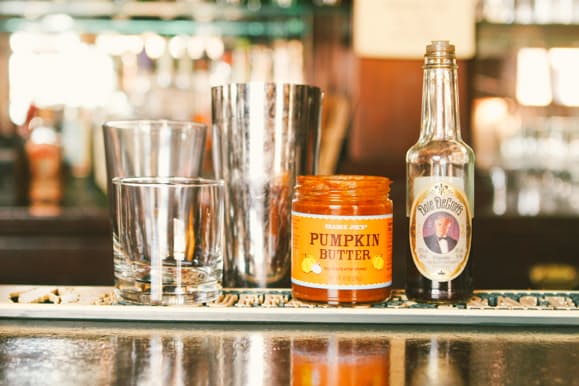 Add all ingredients in a mixing glass. Add ice to the brim. Shake vigorously for 10-15 seconds. Add one large cube in a rocks glass. Strain mixture over glass. Garnish with lemon twist and grated nutmeg. 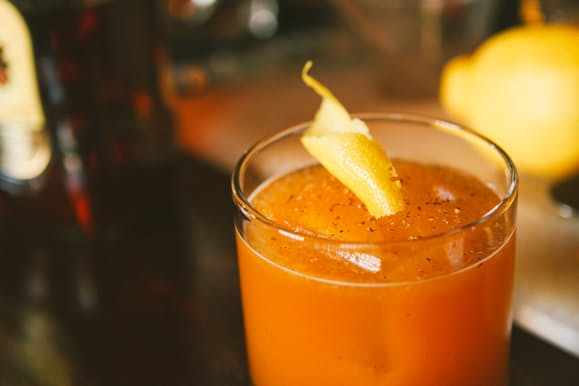 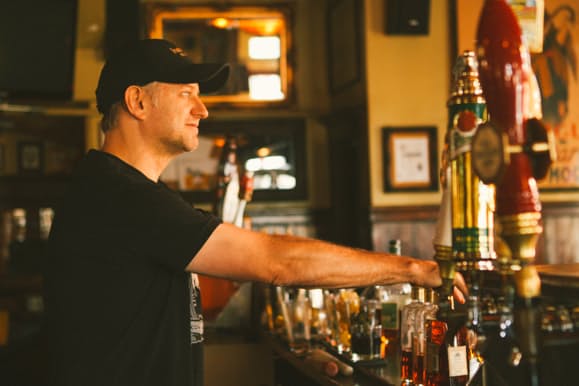 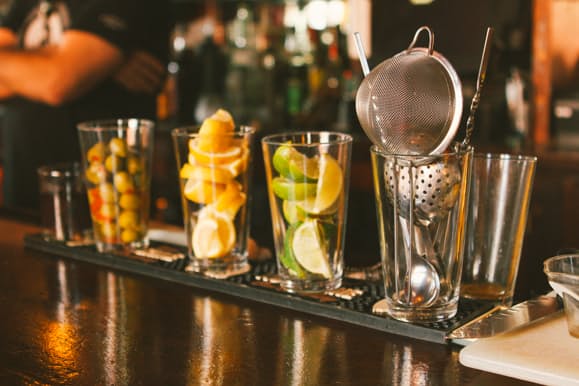 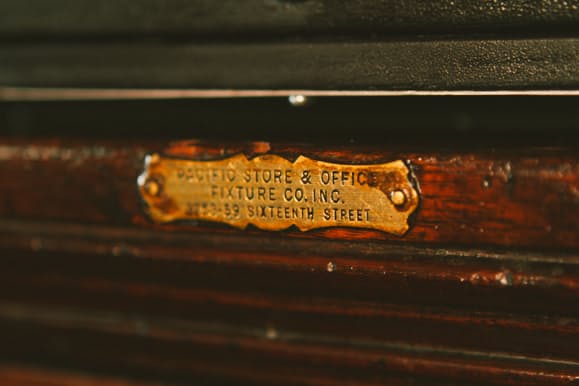 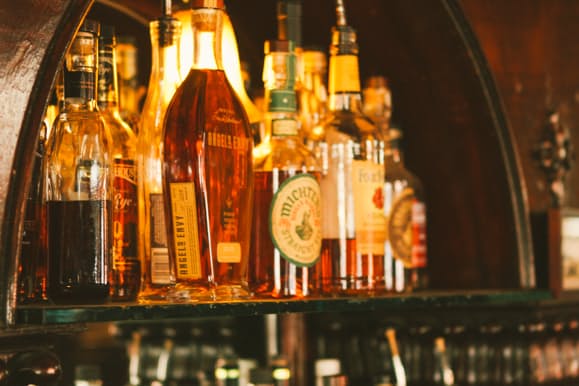 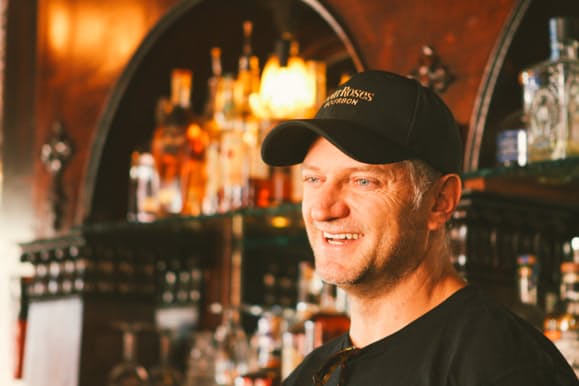 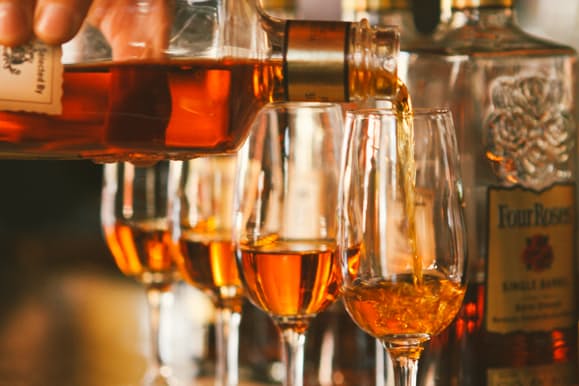 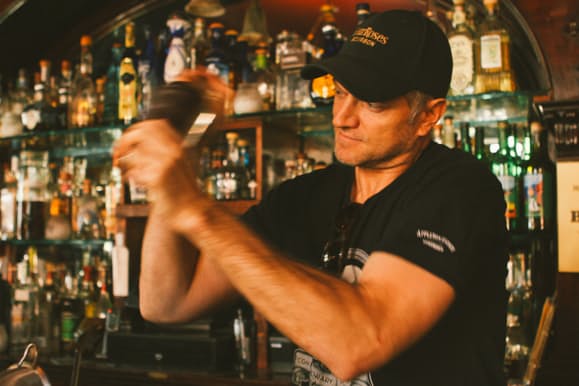 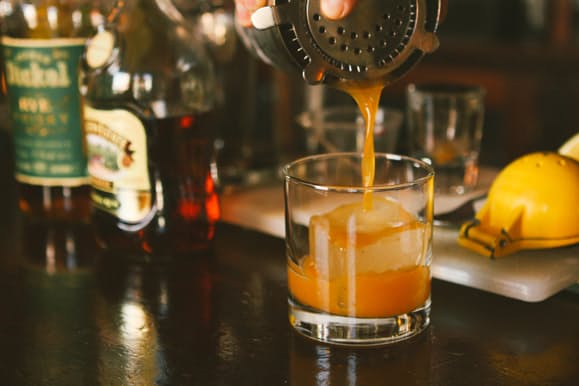 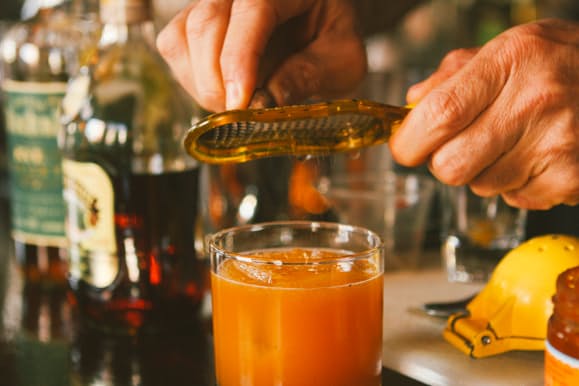 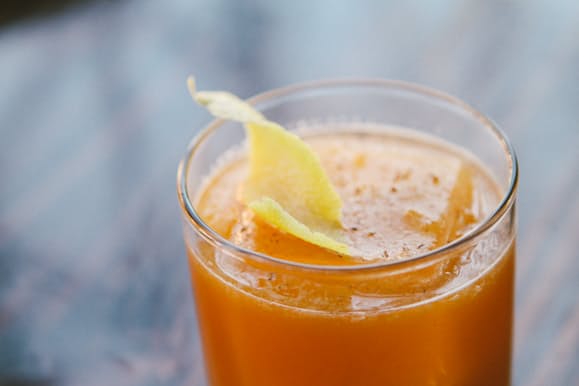 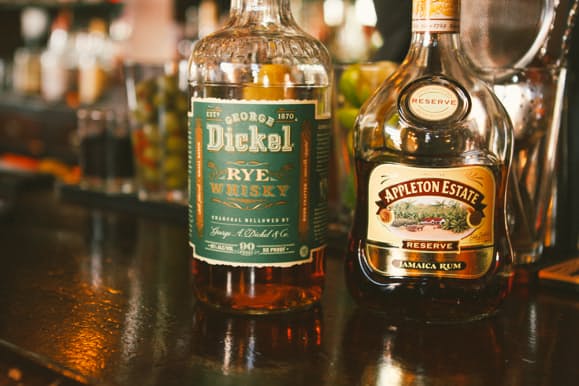 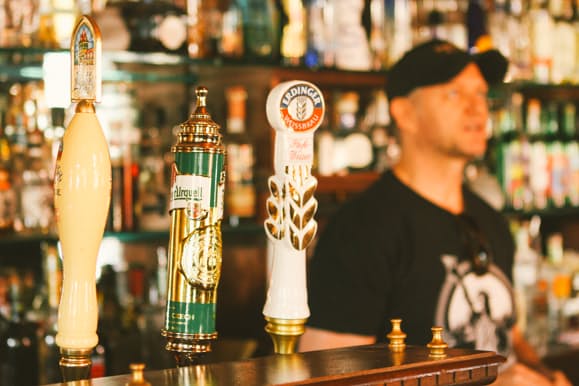 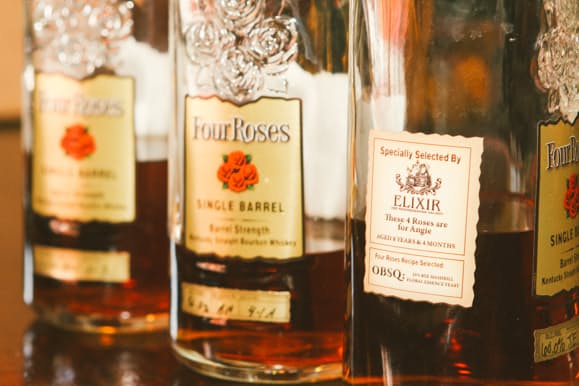 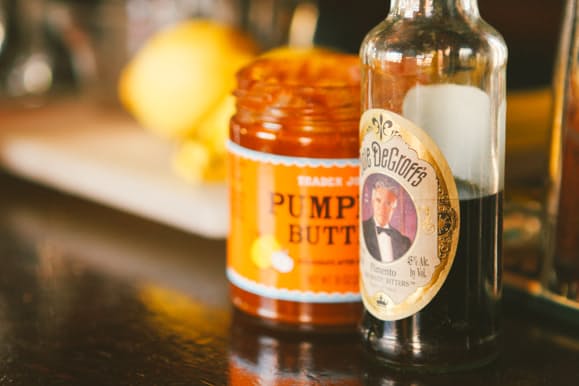 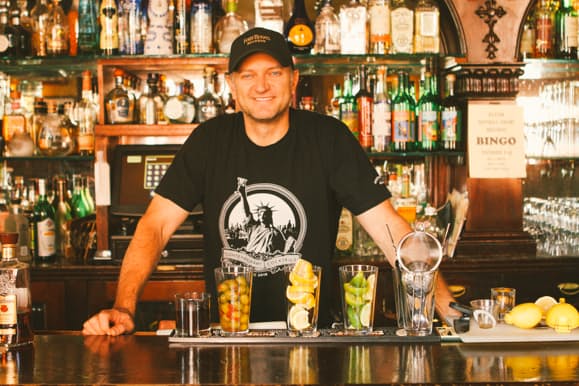 Go check out Elixir, and come by for for their Anniversary Bashes this Saturday, Nov. 16th and Sunday, Nov. 17th.