Myles Men lead the active, stylish, and healthy(ish) lives
that inspire every piece from our brothers at Myles Apparel.

ucked behind a nondescript garage door in San Francisco’s Mission District is a fitness oasis of weights, bars, and climbing ropes. The easiest way to find it is to follow the line of runners hustling along the block to the front door. There stands Tom Hamdani, co-owner and coach at CrossFit Alinea, sipping a large coffee on this brisk winter morning.

It’s just after 7 a.m. and he’s shouting encouragement to his first class of the day as they pant through a circuit of sprints and overhead squats. He’ll be back in that spot when the last class of the night crosses the finish line at 8:30 p.m., but he shrugs off the long hours. “It’s nice because the classes are spread out,” he says. “It makes it easy to fit in my own workout.”

Over the last four years, Tom has shaped his life to maximize training time. In the process he has transformed himself from an out-of-shape delivery truck driver to a competitive CrossFit athlete and certified coach. He co-owns CrossFit Alinea with his wife, Jenn, and their roommate, with whom they share an apartment just down the street. The name Alinea was inspired by the restaurant in Chicago by the same name that is widely regarded as the best in the country. Alinea is Latin for “off the line” and is another name for the paragraph symbol (¶).

Jenn explains the inspiration: “Like a paragraph, it represents the start of a new idea. We want to keep the conversation going. We don’t want to be stagnant in what we think. We want to be open minded. Fitness is always evolving, and it should. Hopefully we can evolve with it.”

After the morning classes, Tom and Jenn walk us to their place where we add our shoes to the rack at the bottom of the long flight of stairs that make up the entryway. Tom jokes that the climb is a rude welcome when he gets back from a tough leg day. The top floor of the apartment is open and well-lit by windows that offer a stunning view of the San Francisco skyline. There are three MacBooks on the dining table where the co-owners answer emails and handle the administrative work for the gym between classes and their intense afternoon coaches-only workout. Tom gets to work making his usual protein-heavy breakfast: three eggs and bacon. Tom’s athletic physique and impressively thick black beard make it impossible to tell his age—he’s 36 but could pass for 28 or 40. That wasn’t always the case. After falling out of the fitness habit for a decade, he realized he was both the oldest and in the worst shape he had ever been, and only one of those facts was under his control.

“That feeling is like, ‘Holy shit, if I don’t do something right now, in five years I could be in much bigger trouble.’” he says. A friend told him about CrossFit but he wasn’t sold until he went to a class for himself and saw people running through the door, hoisting barbells, and climbing ropes. “I was always a gym class kind of guy in high school,” he says, describing the epiphany. “It was natural for me to open a gym.” 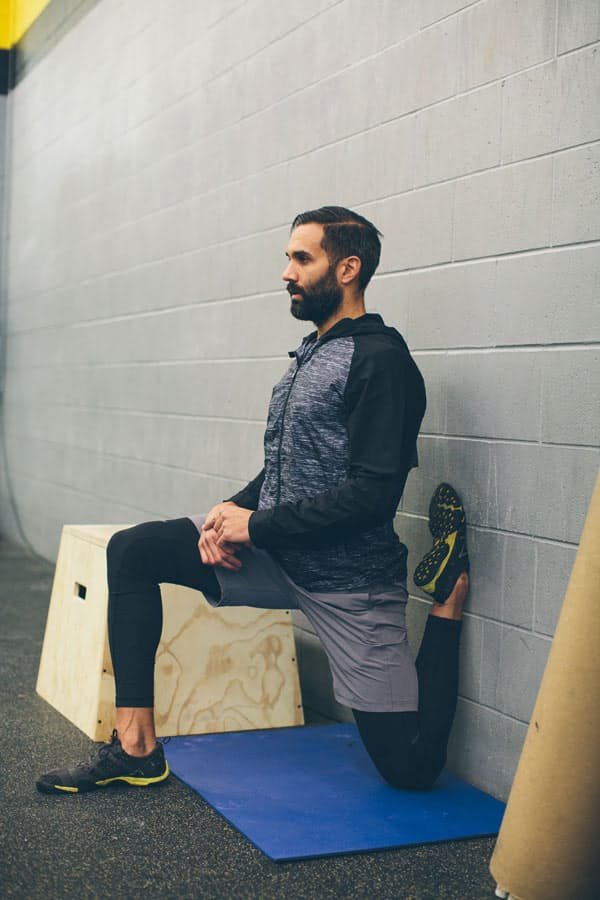 Tom says he loved the delivery job—it’s how he met Jenn—but he was working 15 hours a day when Alinea first opened and as it grew it reached the point where his fitness life needed his full attention.

“Working out changed me physically, but it also changed my perspective,” Tom says as we walk to Flying Pig Bistro for a juice before his workout. “If you’re going to do a 45-minute workout where you’re pushing yourself as hard as you can go, then everything else is easy.” His Fitness Hack
"I never allow myself to go into a defensive position. No matter how I’m feeling I never crouch to catch my breath or lay down right after a workout. That sends a signal that something is wrong. I just stand up and ride it out. You always want to gradually come out of a workout. You never want to go from 100 mph to laying on the ground.”

His Favorite Food
All protein, all the time: “I was eating steak and eggs all of the time and my wife told me she wasn’t going to let me eat like that anymore unless I went to the doctor. I went and had a blood test done and everything—cholesterol, blood pressure–everything looked good so he said, ‘Carry on.’”

His Inspiration
Never losing a step. Tom played basketball in high school and plays pickup twice a week: “I’m not that much slower than I was when I was 18 because of the working out. I would guess that anybody else from the high school team right now is well past their prime.” [H] Northern California native Ryan Moses is the Brand Manager at Myles Apparel. He's an avid snowboarder who practices proper office feng shui. If you manage to catch him on the weekend, you'll likely find him chasing PRs up in the Marin Headlands or re-watching Jurassic Park in preparation for the forthcoming release.