Off the Beaten Path: Adventure in New Zealand

"Nothing compares to the simple pleasure of riding a bike"
John F. Kennedy

May is National Bike Month, making it a pretty cool opportunity to send our Ambassadors and Correspondants to the furthest reaches of their daily rides to show how the humble bicycle can take you a lot further than the office on your daily commute. First up, is Huckberry Ambassador and professional photographer Camilla Rutherford — a Kiwi who uses knobby tires to get as far off the grid as humanly possible. Before you dive into her story, don't miss Camilla's exclusive shop, right here on Huckberry.

long way away, deep down on the bottom corner of the globe, there lies a country that I’ve fallen deeply in love with. It has me tight in its grasp and will never let me go. The reason why it’s so precious? It’s the earth’s newest country, and a bloody long way from anywhere, which means that it has a very small population (only four million people) and vast areas of wilderness and protected national parks. From the mists of jungle-covered mountains and glaciated towering peaks, to turquoise lakes and wild sandy beaches, New Zealand has it all. And I want to explore it. 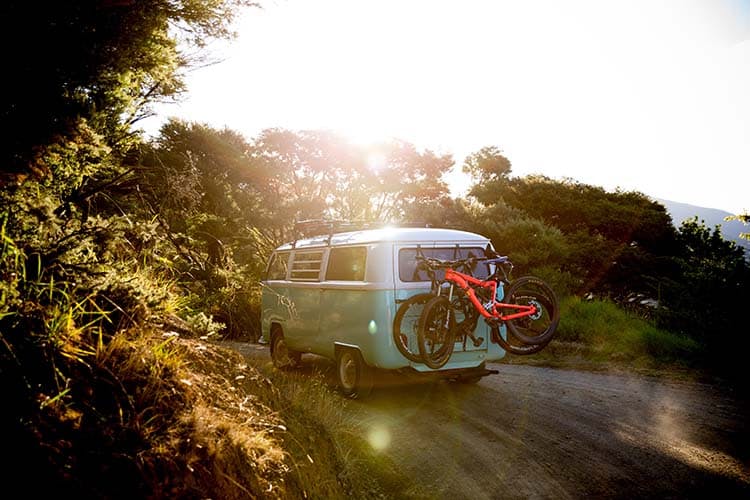 Wanaka in the South Island is my home. Here, the mountains are my playground as well as a canvas for my photography. Through adventuring and telling stories with my camera, I'm able to travel and explore this country's rich diversity.

On this particular trip, I took my lens to the North Island to adventure with professional Canadian mountain bikers Mike Hopkins, Garett Buehler, and Casey Brown in two 1970s VW Kombi Campers. In search of wilderness and isolation, we ventured farther than most would — exploring deeper down that dirt road, biking further along that trail, and sleeping as far from civilization as possible. The trip took months to put together, and with the kind help of Tourism New Zealand we were able to make it happen. 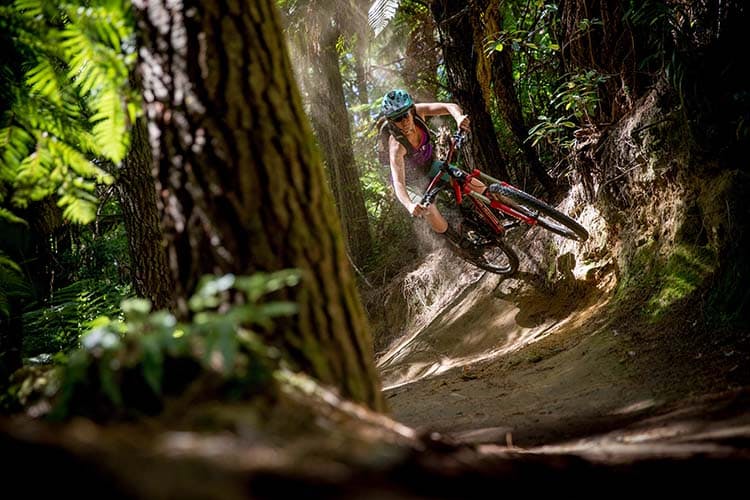 We took the campers and left Auckland, bound for the white sandy beaches of the Coromandel Peninsula. We spent a day at the famous Hot Water Beach, where there is a hot spring on the beach. Here, when the tide is right, you can dig yourself a bath of balmy hot water and cool saltwater. We loved the experience, but it was a bit too busy for the remote emptiness we'd just had in the South Island. It was definitely time to get farther off the beaten track.

We headed a few hours up a dirt road, traveling north up the peninsula through some of the thick native New Zealand bush, to a tiny beach called Stoney Bay, my ultimate favorite camp spot on the trip. From here, we had a five-hour ride to a neighboring beach, where the views were spectacular and there was no-one around — exactly what we were after. To get away from people in the North Island, we learned, you just had to dig a little deeper. 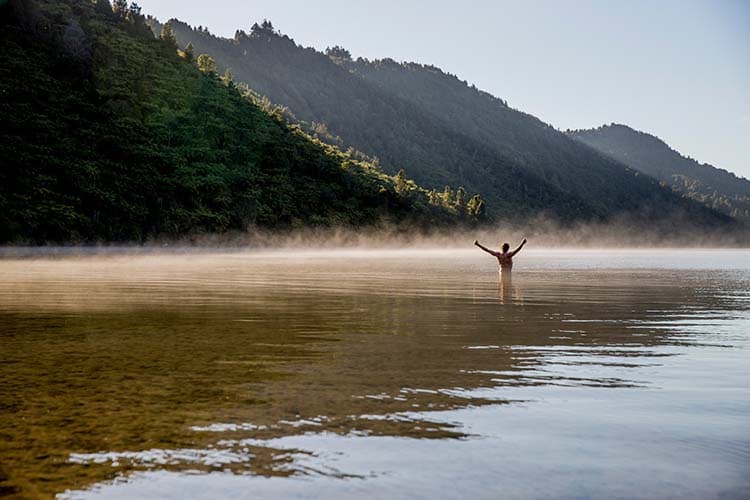 After the remote loveliness of North Coromandel we headed to Rotorua, famous for its amazing biking. Two days shooting and biking the well-known trails was enough for me and we headed off into the wilderness again, this time east to a trail I had never heard of.

After driving miles along a skinny dirt road, we eventually arrived at the Bushaven, a small cluster of houses and a campground run by a lovely couple. They drove us two and a half hours to the top of the trail and dropped us off the peak, which looked down onto an amazing 40 kilometers of downhill all the way back to camp. This trail wound its way through beautiful bush, over swing bridges, and past rivers, all without seeing another soul. 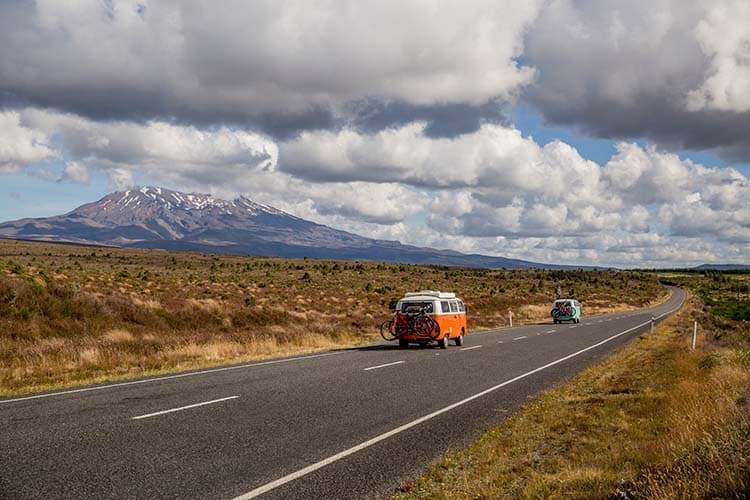 In search of more wilderness riding, we headed to Taupo in the middle of the North Island. Here we finished off a huge two-day trail that led us through the middle of nowhere to a back-country hut. This was the highlight of the trip for me: two massive days on a bike, spent riding along a trail encased in trees so big I was half expecting them to come to life and start talking to me. (Ents, anyone?)

This trail was challenging, to say the least — there were huge uphills and many instances forcing us to hike our bikes up the steep grades, along with massive fallen trees to climb over, slips to navigate around, and rivers to cross. But the fast and technical downhill made it all worth it. After crossing over one last rickety swing bridge over a mossy river, we were at the backcountry hut where we would spend the night. And we did it all again the next day, all the way back to our campers. 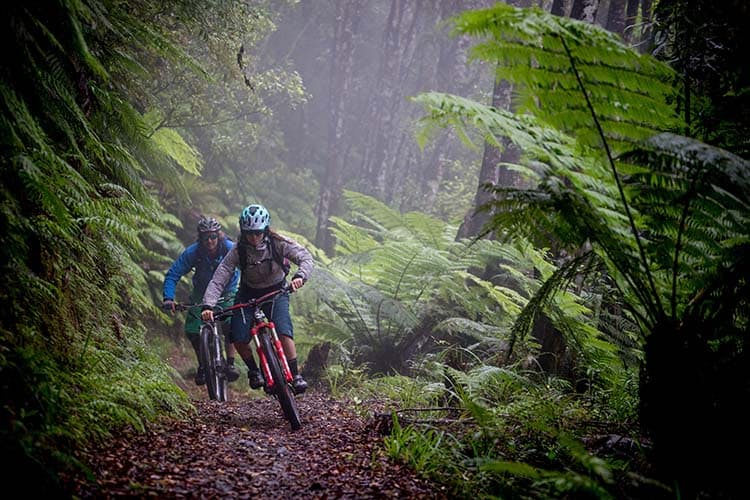 The last stop was for some non-biking activities: walking the infamous Tongariro Crossing, a seven-hour hike over the North Island's sacred volcanoes; the mind-blowing scenery had us feeling like we were on Mars. Followed the next morning with a sunrise stand-up paddleboard session, it was time to drive back to Auckland to drop the campers back off.

Traveling in a VW Kombi Campervan is the most fun you will ever have on the road. Smiles, waves, and respect is all we got from fellow motorists as we cruised along the winding New Zealand roads in search of adventure. Our little homes were a pleasure to drive, cook in, sleep in and look at; there is simply no better way to travel. We were able to hire these immaculate vehicles from Classic Campers in Auckland. 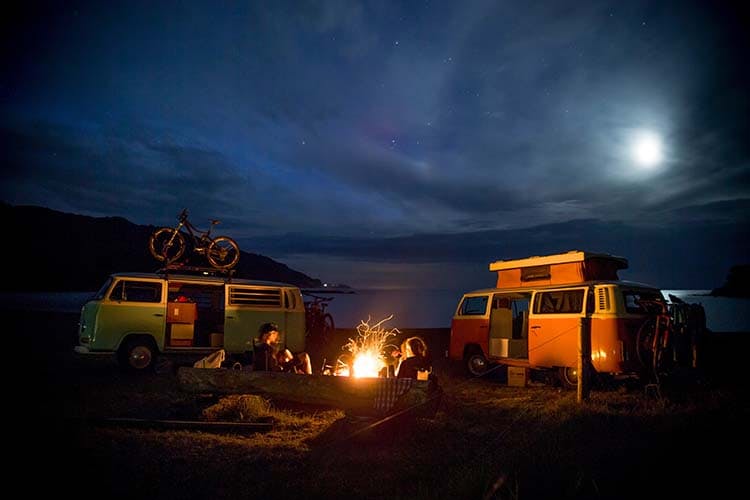 When you are in search of wilderness and non-motor home style campsites, "normal" life becomes obsolete. A shower becomes something that is rare and cherished; even washing your hands becomes a luxury when you stop in to use a gas stations toilet. Washing your dishes in crashing waves on the beach is a whole new experience. Charging batteries and phones using Goal Zero solar panels becomes second nature, and being outside all day every day is glorious. It is so wonderful being back to basics, taking nothing for granted and living simply. No TV, no Internet, purchasing food from un-manned fruit stalls at the side, popping some gold coins in the honesty box, being given fish for our supper by a friendly local and foraging for fruit by the side of the road.

Life on the open road is as rewarding as it is satisfying. Go on — get outside. Get lost. [H] 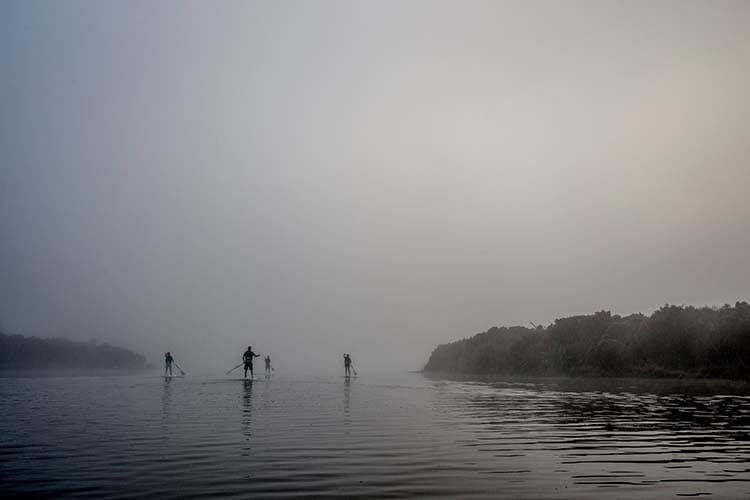 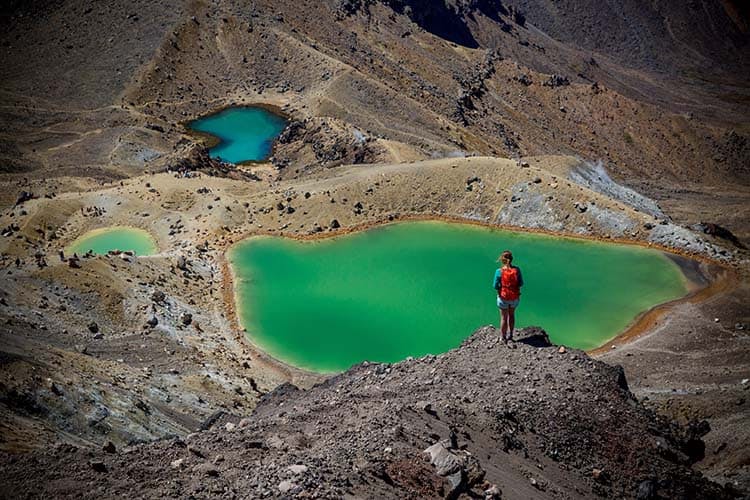 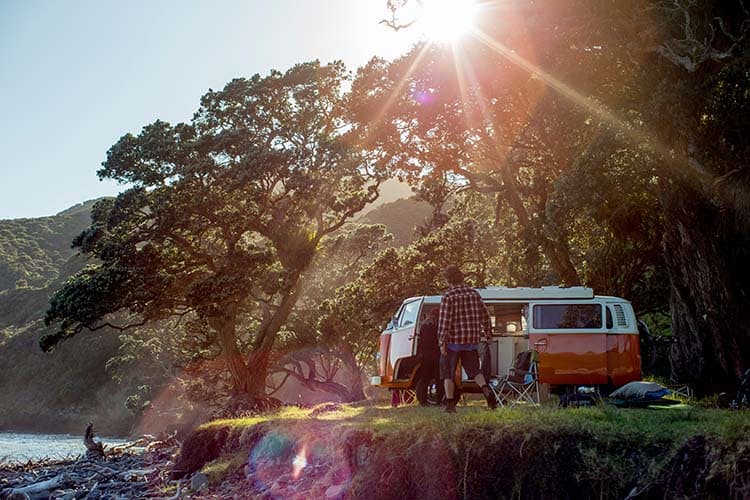 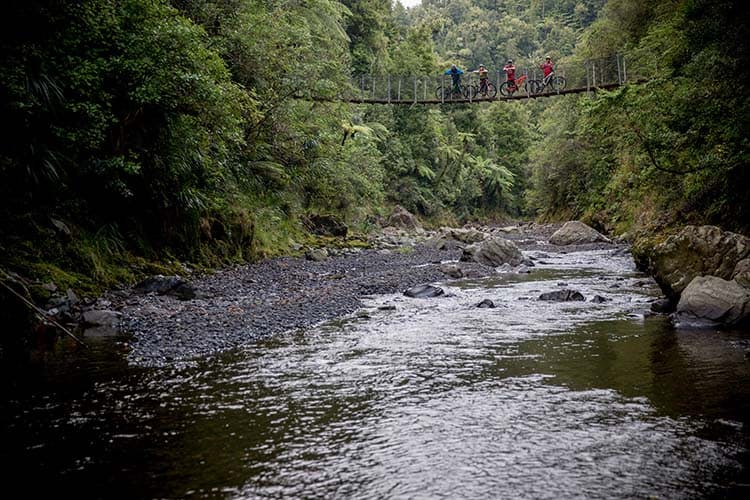