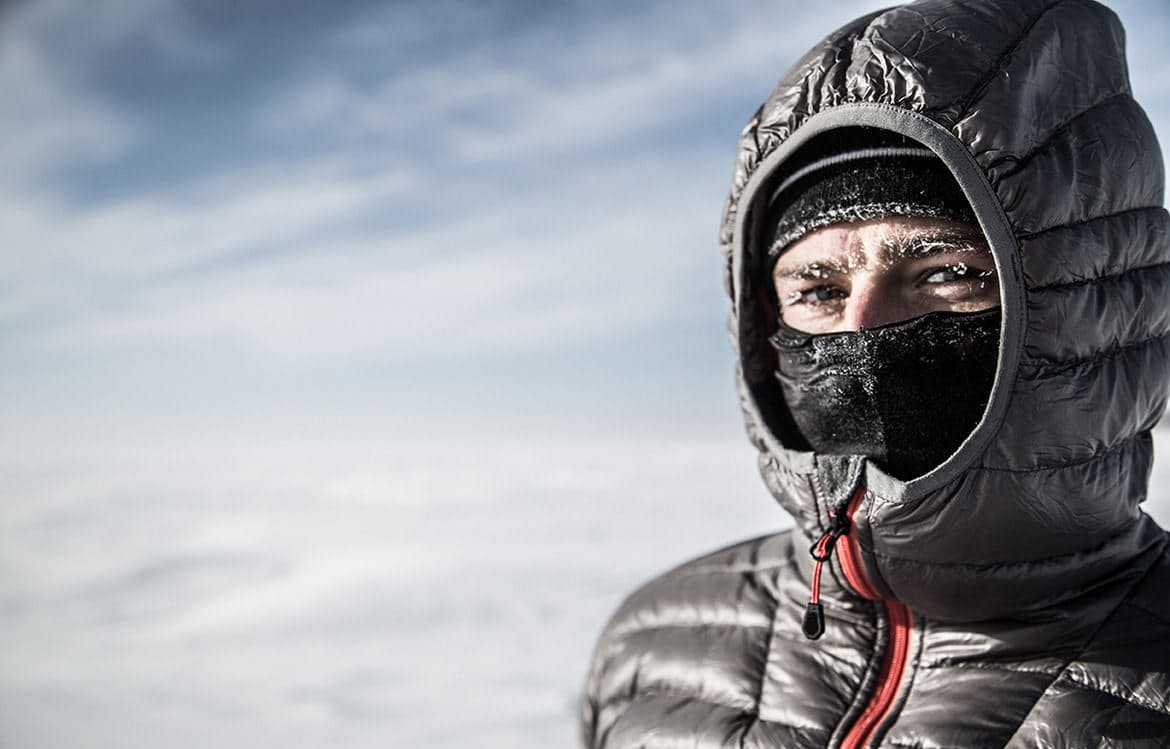 Huckberry reader, Milo Pierwola is an adventure photographer, guide, and founder of EXP Adventures. Below he shares one of his most recent excursions through the Canadian wilderness. Enjoy.

Winter hit harder this year than any I could remember and it just coincided with my Polar Expedition Training hosted by Eric Larsen.  He and his adventure companion Ryan Waters, arguably the best pair of polar explorers in the world, were preparing for their Last North expedition that just completed a feat that may  never be seen again.  As for our adventure; what I expected was a novice experience, what I got was authentic arctic conditions complete with white-outs, gale force winds, and a bitter cold that dug deeper into my flesh every day on the ice and never let up.

The Polar Vortex was not something anyone could have predicted and set records across the continent, including shutting down transportation to the city of Winnipeg.  Only two of us arrived on time and, amid snow drifts that swallowed the road, drove out to a remote cabin on Lake Winnipeg.  The next few days were a crash course for an authentic five day expedition across this lake.  Indoors, we learned everything from how to plan a deliciously high calorie diet to minimizing condensation that created snow on the inside of your tent and sleeping bag during sleep.  Outside, we would race to set up tents, navigate without points of reference, and pack and unpack efficiently, among many other skills.  That was the last time I would feel comfortable. 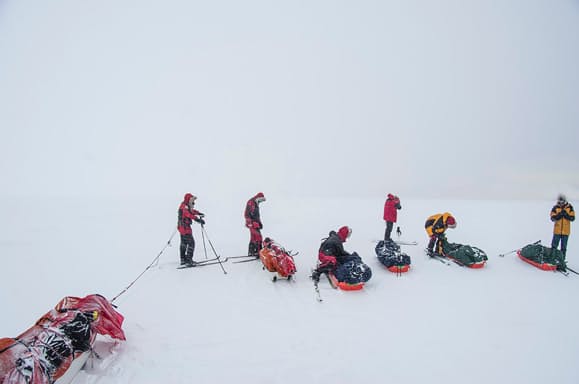 On the morning on the third day, before we could warm up our team set out directly away from shore.  Even the constant march hauling pulks weighed down with sandbags did not help.  We would stop for soup and take sips from our hot water bottles, but even a couple stationary minutes dropped our temperatures rapidly, and so we moved on.

I never experienced such discomfort and there were times that I genuinely felt I had frostbite.  Yet, as I windmilled my arms to get precious warm blood to my extremities, I discovered a spectrum of pain unknown to me that I slowly learned to tolerate.  It would be the most valuable lesson I would take away from this journey as the environment we were entering required performance devoid of comfort. 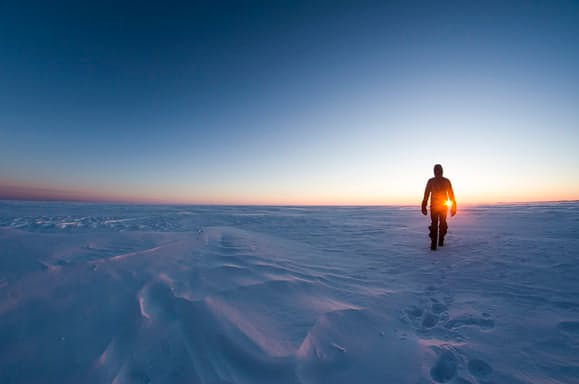 Camping the first night was uneventful and met our expectations.  We put up tents, set up sleeping bags, and congregated in Eric and Ryan’s “mess hall” tent where ice was boiled for dinner.  This time was passed discussing methods of staying warm and problems we experienced with gear throughout the day.  While we ate re-hydrated food, water was boiled and poured into bottles that we would sleep with, and the tent emptied for the night.  For an insomniac like me, this provided an opportunity to take photos of the beautiful gibbous moon uninterrupted.

You don’t really sleep when you’re this cold, and just a few hours later we woke up to a whiteness dissolving our surroundings.  As we prepared to move, everything disappeared into a total whiteout and the only sense of direction I had was the shadowy person in front of me and gravity telling me which way was down.  That was not all; the humid conditions, sleet, and body temperature fluctuations caused my snow mask to become completely useless.  I was unable to remove my gloves for too long because of how cold it was and as ice formed on my visor, any vision I had left was gone. 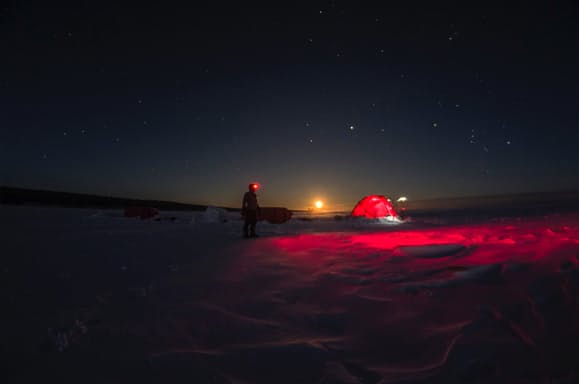 Our march felt endless and the calm was a predictor for what was coming.  What little visible light made it through the heavy haze was indistinguishable from dusk to dawn and time seemed to stop.  Then, the wind picked up and Eric made the decision to stop to take shelter.   The tents we had were tunnel tents and work best set along the direction of the wind.  Unlike the predictable wind of the Antarctic, however, tonight’s wind changed and soon the walls pressed and folded over threatening to snap the poles.  Now, in the dark and with effectively zero visibility, our team was put to the test repositioning tents and constructing wind walls from the snow.

That turbulent night was a gate we all passed that led us into a true frozen wonderland.  The next morning met us with a rare sighting of Sun Dogs; white double halos around the sun made by light refracted through suspended ice crystals.  Contrasted against the mélange of the previous day, these hung in air that was crisp, set against colors that were sharp, and above a carved white landscape that wrapped over the horizon.  The air was much colder and everything seemed to crack and squeal protesting against any disturbance. 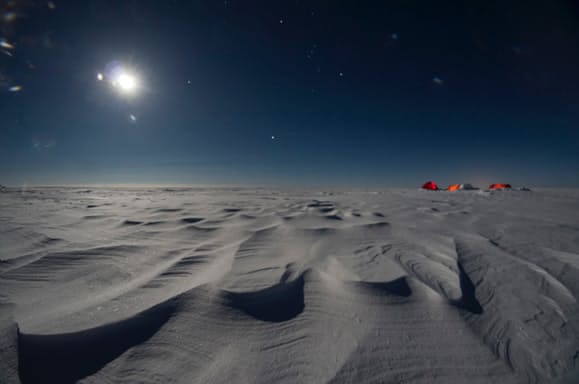 The day was mostly uneventful, but the evening brought an otherworldly light show that would last into the night.  We decided to stay for the day to recuperate from the relentless push.  The white sun, the light of which offered no recourse from the cold, suddenly changed the colors of the sky and brought robust life to this otherwise bleached landscape.  Then, just after it disappeared beyond the horizon, a full moon rose up as a glowing golden orb to replace it.  The timing of this expedition could not have been luckier as the world that the moon now revealed was beyond wonder.

Although never comfortable, I accepted the stark reality that what mattered in this environment was survival and progress.  We traversed this incredible alien place for three more nights, each day gripping us with a deeper cold.  The journey became more systematic and we became more efficient.  Towards the end, as we approached the shore of safety we traveled at a steady pace, evenly spaced, and each to our own thoughts.  Perhaps it was the proximity to warmth, or perhaps what Eric described as the solitude of a true expedition even with a partner, but there was a silence that was dispelled only upon reaching our destination.  This was only a small window into the disciplined regimen that Eric and Ryan would endure for 53 days as they approached the North Pole. 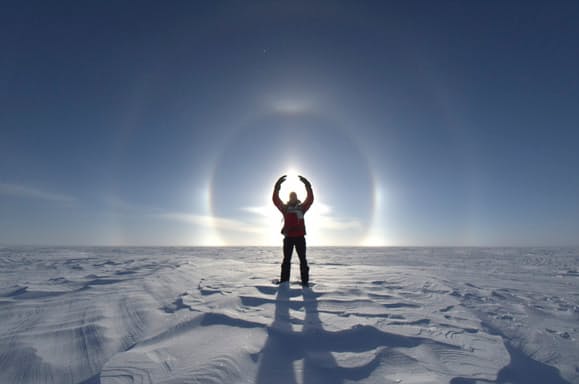 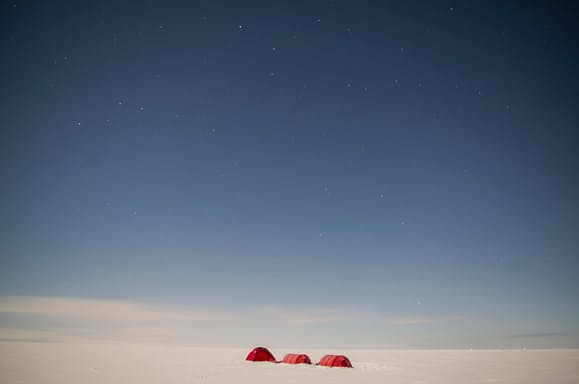 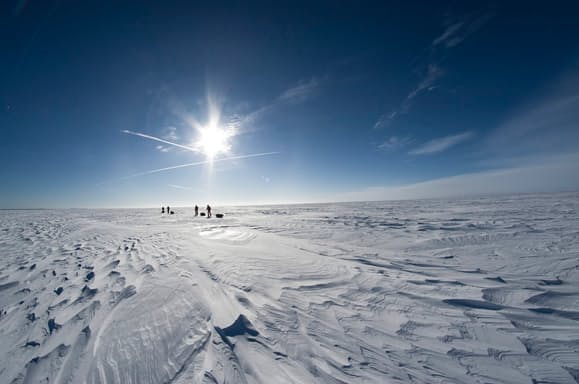 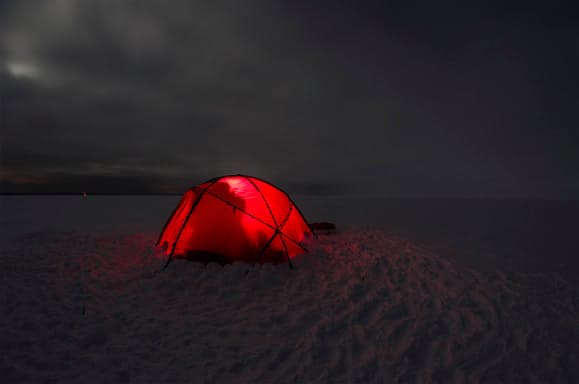