Behind the scenes with Rancourt & Co. Shoecrafters

If you ask Mike Rancourt, whose father made moccasins by hand, whose mother stitched leather in the kitchen when he was a kid, a 3-D printed shoe isn’t quite a shoe. It’s something different altogether.

It’s what you’d expect to hear from any Rancourt, who’ve been making shoes in Maine for three generations now, since Mike’s father immigrated from Canada and got into shoemaking in the 1950’s.

Mike’s son, Kyle, is the latest Rancourt to take up the family art of shoemaking, and together the father-son duo lead one of the few outfits keeping the tradition alive and thriving today.

Rancourt and Co. Shoecrafters, as they’re officially called, lives in an unassuming building in Lewiston, Maine. No fancy sign. No giant boot. Inside, past the showroom, lies the production floor. Rolling racks of half-finished shoes, well-worn machines, wide rolls of untapped leather, aisles of model lasts lined up like disembodied feet.

All around, the hum of double-stitch sewing machines, eyelet punchers, and laser-cutters creates a strange, pleasantly chaotic background noise - but that wasn’t always so. When Mike was first exposed to shoe crafting, it was a different business altogether. 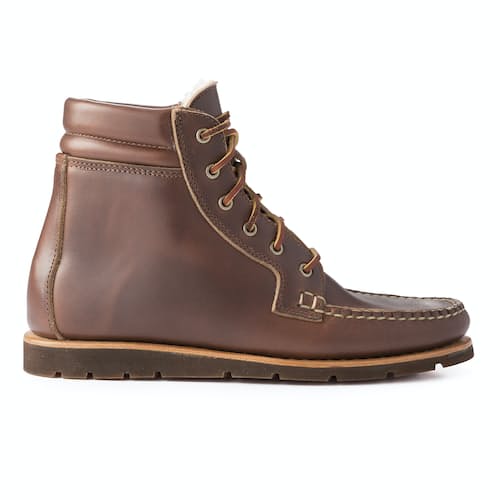 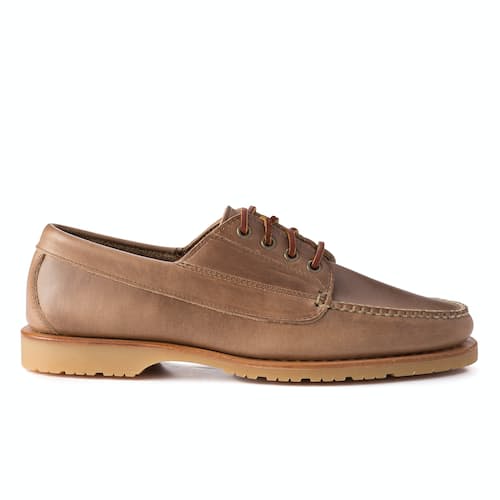 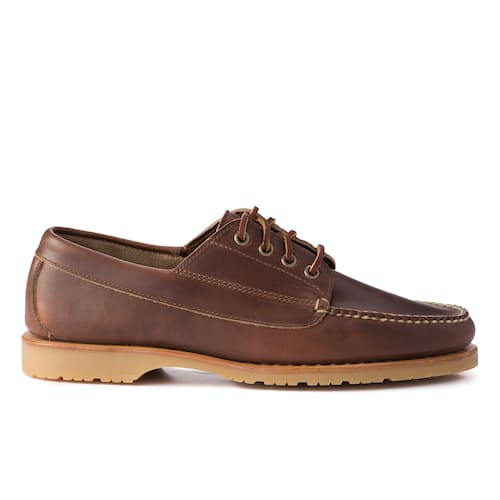 “My introduction was the hand sewers,” he tells me as we criss-cross the factory, “My father was a Moccasin maker and there were 40 or 50 people in a room, all hand-sewing, and it was incredibly quiet because there were no machines running. That was back in the 1950’s. It was all done by hand. That’s what intrigued me the most.”

We stop at one of the largest (and noticeably most high-tech) machines in the building: an automatic leather cutter. It’s about the size of a dining room table, fitted with a motorized pattern cutter. A worker loads in a design file, which is projected downwards from the ceiling onto a large piece of leather. The pattern cutter glides over, and in just a couple of seconds, cuts the shapes neatly from the leather. Perfect every time.

This machine is perhaps the perfect symbol of how Rancourt has changed, and what it means to be a heritage industry in the age of technology. Sure, the automatic leather cutter means R&D takes a fraction of the time it used to — but the investment wasn’t just a shortcut for Rancourt to start churning out pair after pair.

Shoemaking Glossary
Die: the shapes of parts of the shoes that use to cut the leather used in production
Last: form of a foot, usually made from metal or wood, used to shape shoes

Simply put, what the leather cutter does can’t be done by hand. Not as fast, and not as precisely. Hand-cutting leather is an imprecise art, with an inherently imprecise material. Dies — the shapes of parts of the shoes that crafstman use to cut the leather used in production — change shape over time as they’re used to cut leather over and over. The eventual result is craftsman is trying to make pieces fit together that aren't quite right. Not exactly what you’re looking for when you want your product to last a lifetime.

It’s easy to assume that done by hand is done better, and that handmade is better made. But the leather cutter, admittedly a starkly modern machine in the midst of a traditional industry, embodies something more important about Rancourt: a relentless pursuit of creating best possible product, and the realization that you can still respect your roots without getting stuck in the past.

“It’s about the redundancy of a process that would be more consistent if it was through automation,” he tells me, “So cutting is a good example, where I want straight lines, I want the marks to follow the lines and not have the craftsperson trying to fit together two pieces of leather when the lines don’t fit together the way they should.”

While the machine can cut leather perfectly every time, and can run all day, But when it comes to the construction of the shoe, the sewing and the eyelet punching, there’s no match (yet) for the skilled hand of an artisan.

A few steps away, a man with his fingers heavily taped is hand-stitching a pair of loafers. He punches a heavy needle through the leather, and the thread cuts deeply into the folds of his fingers as he pulls the stitch taught. The bandages aren’t there because of injury — they’re to prevent it. The friction of the thread, pulled tight over and over throughout the day, would slice their already heavily calloused hands to pieces.

60% of all Rancourts are still completely hand-sewn

“[The leather cutting machine] doesn’t change the handmaking process of the crafting. We’re still using the same leathers, the full grain, you still have to cut the same way, and the technician that’s cutting still has to understand leathers and understand the expectation of the customer.”

“We have a consumer base that really loves the story and the product and the way we craft things, and I’m so happy about that”

Remarkably, 60% of all the shoes Rancourt makes are still completely hand-sewn. A single pair takes about three hours in the hands of a skilled worker like the one I stood and watched, a testament to how many stitches it truly does take to bind leather together well enough to last a lifetime of steps.

“We can fast forward 20 or 30 years from now and look at 3-D printers and their capabilities. Now you’re getting into a totally different element of shoemaking, that moves so far away from the crafting of raw materials and the finishing. It’s not anything I would every be interested in doing.”

Next to us, a rack with a dozen or so pairs of Cordovan boots sits, waiting for Mike’s inspection. Every day, he hand-inspects a dozen or so pairs of Rancourts before they head out the door. For some things, like the quality control check by the eyes of a man who's been around shoes since he could remember, there is no substitute — yet.

But where they’ve been able, Rancourt have evolved while still managing to keep their soul, the old and new of it, alive.

He runs a thumb over the polished cap toe of a Cordovan boot, one of the most expensive and demanding products they make. "It’s that striving to create perfection with imperfect materials that make this thing so beautiful,” Mike says.