Inside the Life of a Sponge Diver

Tales of danger, death, and shipwreck discovery from a practitioner of one of the riskiest professions in the world

The sea is vast. There is so much more water than land that it is difficult to conceptualize. To search the seafloor for an object—any object—can be a Herculean task. As an underwater archaeologist, the discovery of a new shipwreck is cause for celebration. Locating (and indeed relocating without GPS) a wreck even in a known area can take years.

Every year expeditions search the seafloor using the latest, most expensive technology. Budgets generally run from tens to hundreds of thousands of dollars per day for research vessels. A successful project may locate two or three shipwrecks in a season. This is the measure of success I am used to.

It was several years ago that, as the archeological director for the Albanian Center for Marine Research, I started studying the artifacts that fishermen pulled up in their nets to locate shipwrecks. This work led to me being contacted by a friend of a Greek sponge diver in 2012 that said I needed to listen to his stories.

This set us on the path of one of the most successful shipwreck expeditions in history.

This set us on the path of one of the most successful shipwreck expeditions in history.

Antonio Koulouriotis is a former sponge diver turned archeological resource. His stories from the height and decline of the sponge industry are a window in a different life, one full of adventure, travel, and danger that few people today will ever match.

Sponge diving was a difficult and often deadly profession.

Sponge diving was a difficult and often deadly profession. Sponging was a trade in the Greek islands for centuries, but the introduction of the Skafandro hardhat diving suit and compressed air changed the game beginning in 1865. Big money flooded the islands and men with little understanding of partial pressures and human physiology took to the sea. Sponges brought in so much money that divers were paid with British gold sovereign coins. However, the human cost was dramatic. A study from 1950 to 1969 found that of 300 divers working annually during that time, 167 became paralyzed and 48 died. Six men died on a boat Tony was working on in one year. Every Kalymnian family had members who were paralyzed or died on the sponge boats. When the Kalymnian women would see the boats returning at the end of the season, they would don black mourning clothes in preparation for the inevitable. Despite the human cost, sponging on Kalymnos became the central component of the island’s culture.

Six men died on a boat Tony was working on in one year.

It was this culture that Tony was born into. “It is in my DNA,” he says. From a young age he was fishing and freediving, and then he trained as a Greek navy diver in 1960. For several years he worked training new navy divers, but then he left to work on the most prestigious sponge boat in Kalymnos. It was a boat known for its deep dives, big profits... and fatalities. His working range was 50 meters (165 ft.) to 70 meters (230 ft.), often staying for an hour or longer. This is a diving profile that will give you chills if you have knowledge of human physiology under pressure. 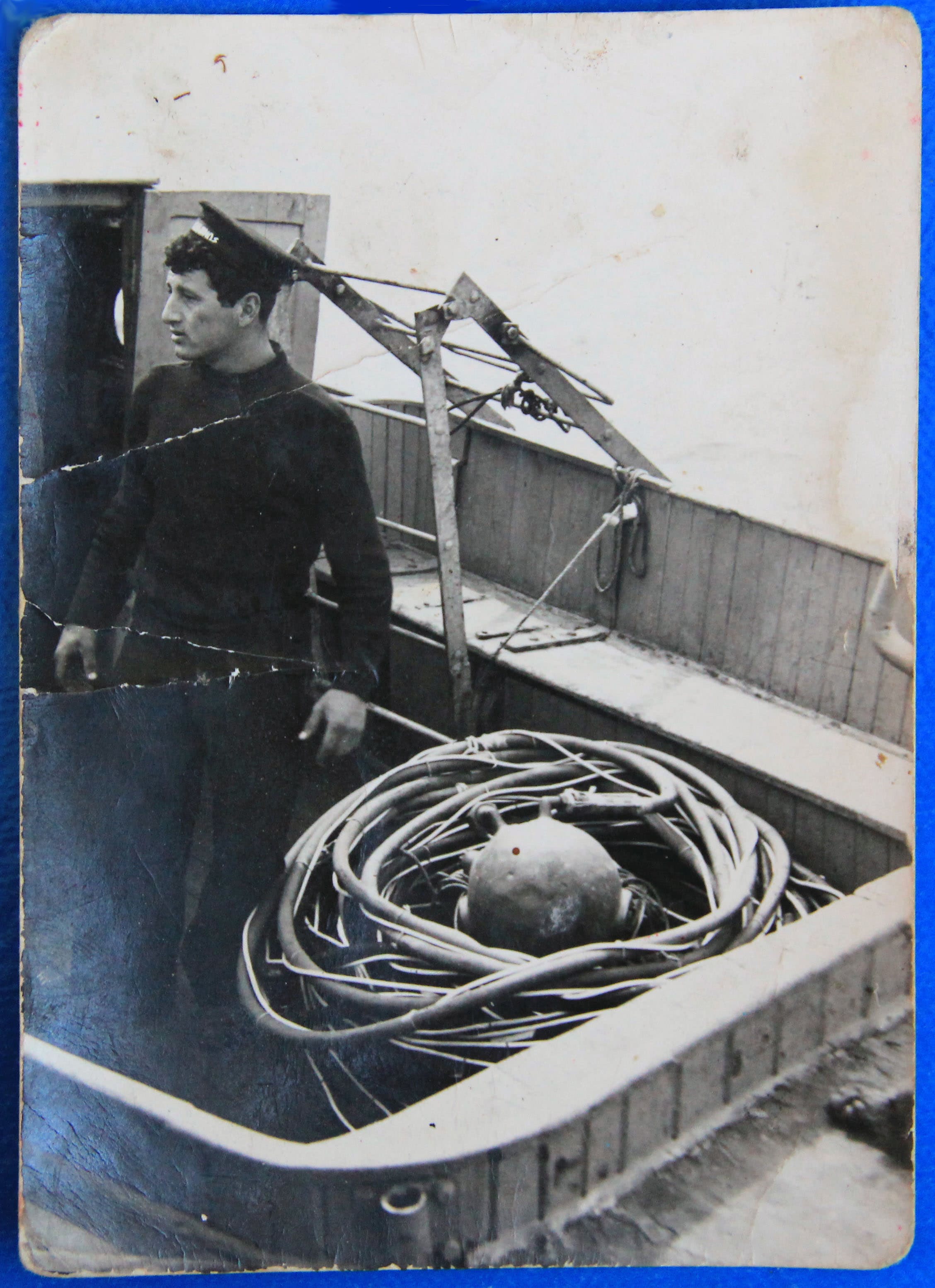 Eventually, Tony earned enough to have his own sponge boat and a team of divers. He worked sponges in the US, Caribbean, and Australia. Interspersed with his undersea tales are stories of the nightlife in gritty Liverpool and decadent Cuba, or hunting strange creatures in Australia. The only places he seemingly hasn’t traveled are those places that are landlocked.

Tony has incredible stories: battling sharks, getting the bends, and, of course, discovering shipwrecks. He has more stories than could fill a book, so for this article I asked Tony to tell us what it was like working a day on a sponge boat during the height of the industry.

Tony has incredible stories: battling sharks, getting the bends, and, of course, discovering shipwrecks.

Sponging off the Libyan coast used to be big business. Greek boats would arrive with 8-16 men per boat and collect as much as 40kg (88 pounds) of sponges per diver each day. They would awake and get the gear ready. The first dive was at 6 AM, as soon as there was light. They would work for the next 14 hours until the sun would set and there was no more light to spot sponges.

The only places he seemingly hasn’t traveled are those places that are landlocked.

With 8-16 divers per boat, the men would have a diving rotation. Each diver would spend between half an hour to an hour diving on the larger boats, longer on the smaller ones. The boat would slowly make its way along the coast or around islands through this rotation. Sponges only grow on rock, so islands are ideal locations for sponge diving. Boats could circumnavigate several islands each day.

Mid-morning there was a small break to smoke a cigarette, otherwise work continued the whole day.

Divers would descend to 50-70 meters and begin searching for sponges. Unlike the finished products known from your shower, prior to processing sponges are black or dark green.  Divers would grab them and stuff them into mesh bags- a good diver would have 5-6 kilos at the end of his dive.

After a dive, the first thing the boat crew would do is hand the a cigarette.

Diving to these depths is dangerous and the nitrogen that builds up in the body’s tissues exceeds diving table recommendations. Since other divers needed to use the compressor system, sponge divers often did not have enough time off-gas, resulting in decompression sickness, or “the bends.” The bends is a painful and sometimes deadly accumulation of nitrogen bubbles forming in the blood stream. It can cause rashes, blurred vision, paralysis, and death. After a dive, the first thing the boat crew would do is hand the diver a cigarette. Tony says, “If you wanted the cigarette then you were not bent, but if you refused then it was a sign of the bends.” Today we understand that cigarettes restrict blood flow and can cause complications with nitrogen bubbles, potentially causing decompression sickness.

The work rotation continued throughout the day until the light faded. After sunset, a light on the boat guided the last divers back. It was hard work with no breaks, no safety guidelines, and little compensation.

Other than water and cigarettes, the divers consumed nothing until the single meal at night.

After dark there was no time for a break since the sponges had to be compressed. Divers would stomp on the sponges to get as much water out as possible. The sponges were then placed in a giant screw in the hold to compress them even further.

It is at this point that the divers would eat their first food of the day. Tony insists that diving with any food in your stomach is a bad idea. Other than water and cigarettes, the divers consumed nothing until the single meal at night. Laughing, he told me about a time he brought the cooking pot to the other divers. He opened the lid and saw something black in the soup. “I thought it was meat,” he says. He quickly grabbed it and stuck it in his mouth, but he should have known better—it was a cockroach. Meat was rare. Most meals were simply bread, though vegetable or fish soup was common.

Sponge boats were small and could barely hold the whole crew without having divers underwater. There was little room for the crew to sleep on board and definitely not when it was full of sponges. This meant the divers had to go ashore to try to find somewhere to sleep. Usually the crew slept on the beach, but when it rained they would try to find caves and start a fire for warmth.

the crew slept on the beach, but when it rained they would try to find caves and start a fire for warmth.

Everything changed for sponge divers during the 1986 season. One week the sponges were healthy and it looked like a good season, and the next week every sponge crumbled to dust in divers’ hands. It was inexplicable. Later the Chernobyl disaster was made public and sponge divers blame the accident for the sponge blight to this day. Ecologists have offered other explanations, but sponges have never fully recovered from the blight. It essentially killed the industry and divers had to find new jobs. Many became shepherds, while others—like Tony—remained at sea, fishing, hunting lobsters, and working on cargo ships. However, get a few old spongers together and they will tell you tales from their many hours under the sea. 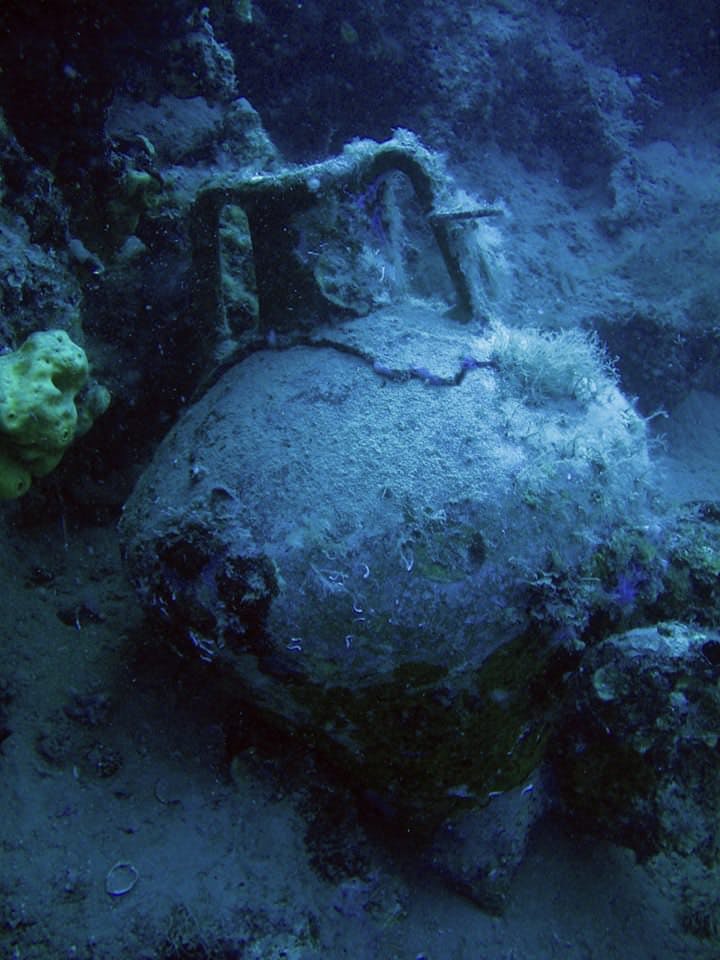 Today, Tony spends his days at the Yiamas taverna in Emporios on the island of Kalymnos. Famous for his wife Kalliopi’s cooking and his son Dimitris’ larger-than-life personality, the bar draws an eccentric crowd from across the island. Tony enjoys the visitors, even dancing when the bass drops on Dimitris’ eclectic music selection. He rarely advertises his past; only lucky visitors get to hear his underwater stories.

Only lucky visitors get to hear his underwater stories.

However, when Kalliopi isn’t listening, Tony calls Yiamas his “jail” and asks me how much a new SCUBA regular costs. Diving is never far from his mind despite many years of the bends resulting in chronic pain. He is badly in need of surgery (unavailable due to the crisis), but instead he talks about fixing his boat and how much deeper he can dive with a stronger compressor. He says he needs a vacation, by which he means leaving the taverna to take apart his boat engine and then reassembling it. I don’t know if Tony will ever dive again, so I simply listen and enjoy his grand vision of a final sponge expedition.

In the summer, the search for shipwrecks will continue. The archeologists will travel with Tony, as well as local fishermen and free divers, to track their leads on sunken quarry. And in the evenings, we’ll listen to stories about the old days when sponges lined divers’ pockets with gold, the measure of a man was how deep he dove, and women put on mourning frocks when the sponge boats appeared on the horizon. [H] 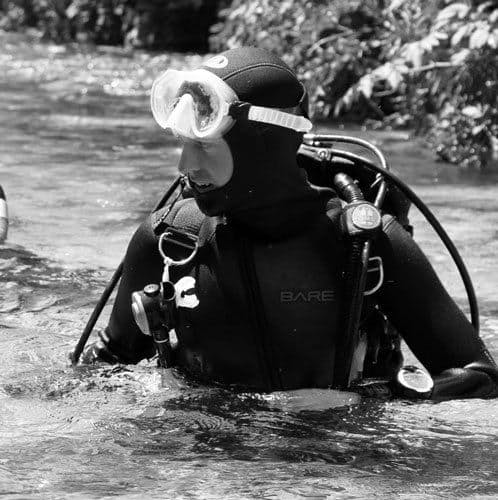 Peter Campbell is an underwater that works on shipwrecks, sunken cities, and underwater caves. If there's water, he'll dive in it. His research focuses primarily on ancient Mediterranean cultures and how they transferred trade goods, people, and ideas by ship. Currently, He's the director the Albanian Center for Marine Research and a research associate at RPM Nautical Foundation.