How to Fall in Love with Colorado: Part 1

8 hours after arriving in Colorado, I exit highway 70 and make a left turn towards Stevens Gulch Road and the trailhead for Grays Peak. The storm clouds rolled in earlier, and my headlights illuminate the snow starting to fall. My rental Corolla rolls up to the start of what I’ve seen described as a “4x4 road that should probably not be attempted in a low clearance vehicle”. But what the heck, it’s late, and I don’t feel like walking the extra miles tomorrow morning. Let it be known that it is possible to traverse Stevens Gulch in a low clearance vehicle, albeit very, very carefully.

Too lazy and cold to bother setting up a tent, I opted to break out the sleeping bag in the backseat of my car at the trailhead parking area. A far cry from the relative luxury of my RAV4 back home, I spend the night trying a dozen different sleeping positions until waking to my alarm at 5am. The morning air is crisp, and I set out into the morning darkness with headlamp lighting the way. 3,000ft of uphill to go. The dusting of snow at lower elevations gives way to calf-deep trudging in some places, but I hardly notice. My eyes are on the sky. As sunrise approaches, brilliant orange light begins to creep over the edge of the mountains to the east. 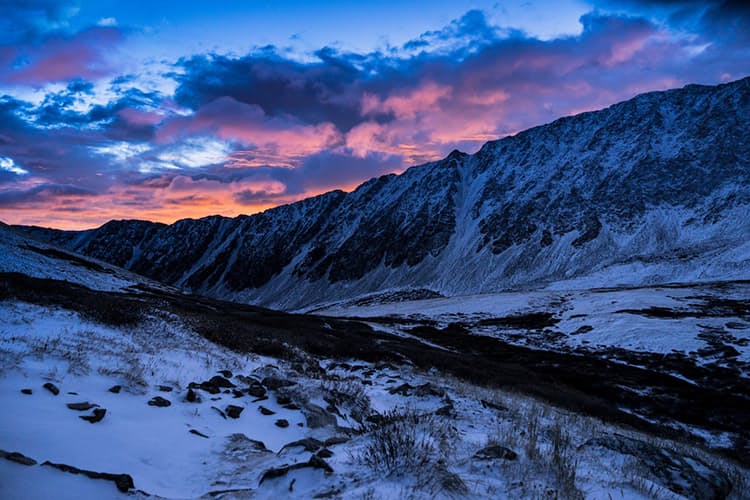 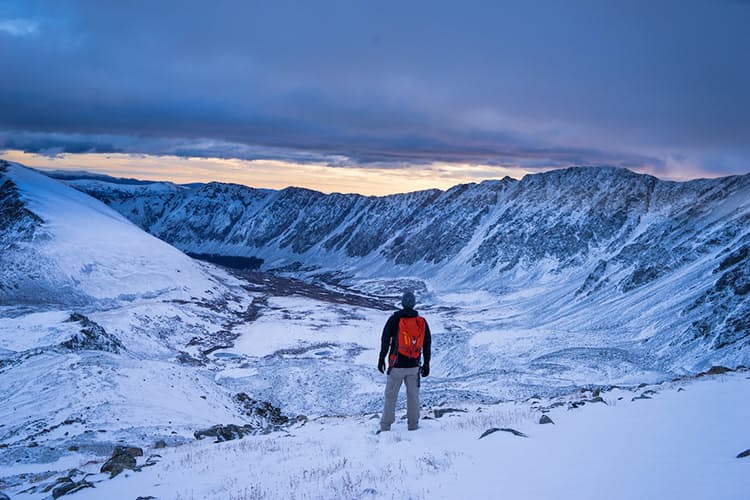 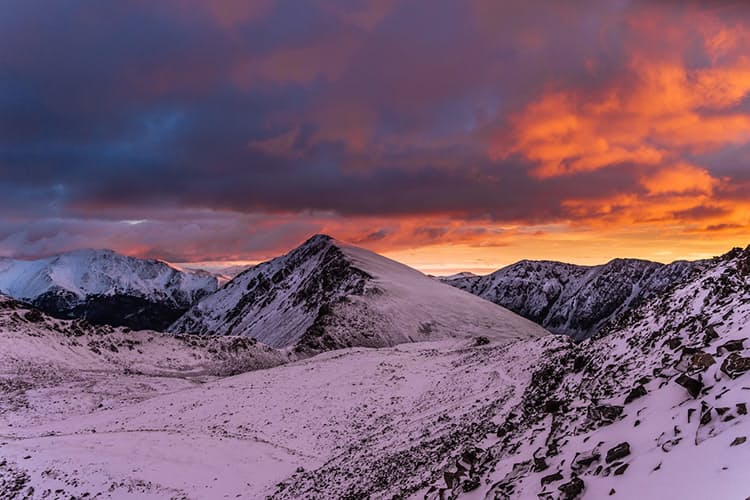 The silence of the mountain is incredible. I’m alone with my thoughts, a crisp breeze blowing out the storm, and the crunch of my boots in freshly fallen snow. I pause for a moment on the ridge to watch the rising sun paint the clouds with a palette of orange and purple. Sometimes you get up at the break of dawn and are stymied by overcast skies or bad weather. But you keep doing it, because sometimes, you get lucky enough to witness the perfect conditions come together. 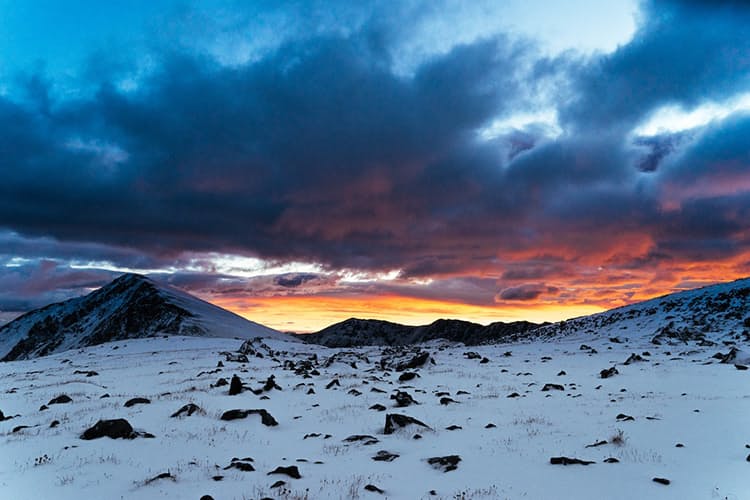 On Thursday morning, following some morning climbing in Boulder and a quick stop at the Stone Cup in Lyons, I continued north to do some exploring in Rocky Mountain National Park. The weather was perfect, if a bit windy. After chatting with a couple of park rangers, I decided to day hike Glacier Gorge to Mills and Black lakes. The trail to Mills Lake heads up through Glacier Gorge and progressively snowier terrain. A cap of clouds hanging on to the peaks in the distance gave a fantastic backdrop to a landscape reminiscent of a fairy tale.

I did some impromptu trail running on the way back from the lakes to my car just to make sure that I had time to find a spot for sunset. I ended up finding a perfect spot on the Ridge Road, where I sat and watched the golden light play with the last clouds teasing around snowy peaks. Following a long day of exploring RMNP, I headed south down Highway 7 towards Longs Peak. My buddy Colin Delehanty had recommended that I check out Chasm Lake, an alpine tarn that sits at the base of Longs Peak. Less than ideal conditions and lack of gear meant a summit of Longs was unlikely, so I figured this had to be the next best thing. Exhausted from a long day of driving and exploring, I crashed at the Longs Peak campground late Thursday night. A few short hours later, I hit the trail at 5am in 24° weather. 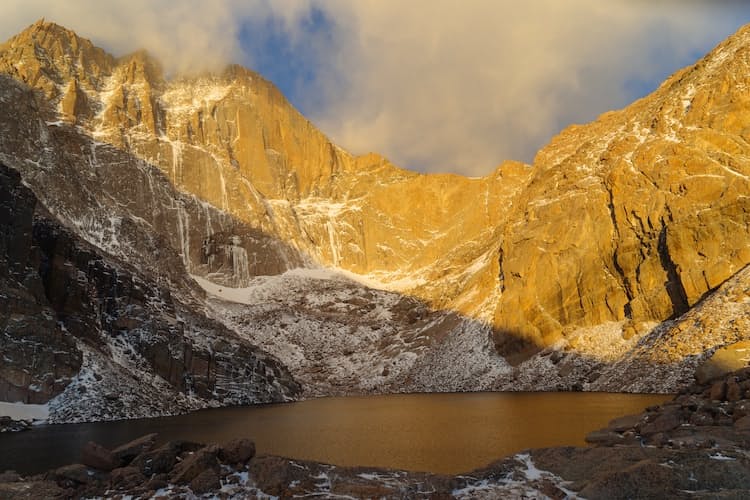 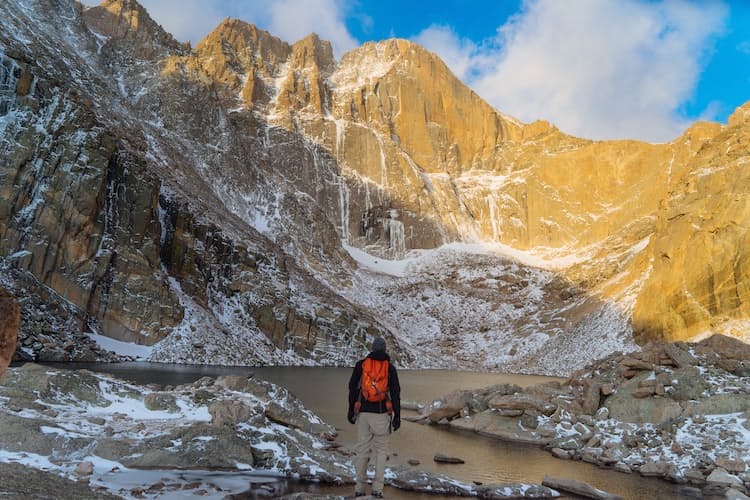 It’s a satisfying feeling when you put in all the work for a single view,
and it comes to fruition.

The 5 mile trail climbs around 2500ft, and starts by winding through dense forest. In the morning darkness, trudging through thick trees isn’t the most exciting. When I finally climbed out above tree line, although the wind cut right through my jacket, the massive profile of Longs and the slowly growing light on the horizon was a welcome sight. After scrambling up an icy headwall, I finally managed to reach the lake and catch the first light hitting Longs Peak. It’s a satisfying feeling when you put in all the work for a single view, and it comes to fruition. 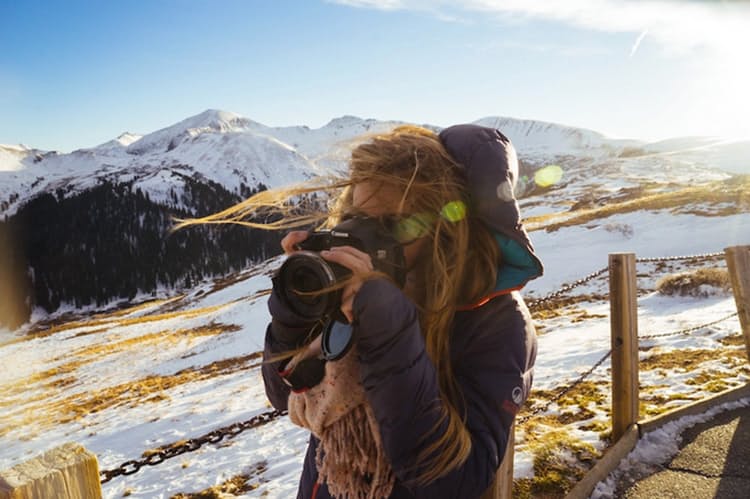 After a quick drive back to Boulder, I met up with Whitney James, OutsideGo gal, Huckberry contributor and fellow weekend warrior. It’s been a goal of mine to determine if she’s actually as rad as she appears to be on the internet. (Spoiler alert: the answer is yes.) I left my weekend in her hands; the plan was to head over to Aspen to do some camping and backpacking for the weekend. We took off from Boulder in the afternoon, with plenty of stops along the way to take pictures and enjoy the scenery.

After a night at Whitney’s “secret” camping spot near Aspen, Saturday brings a quick drive to the trailhead at Conundrum Hot Springs, our destination for the night 9 miles up the valley. The trail winds up the canyon and luckily we are in time to catch the last of the aspens clinging onto bright fall colors. It was Whitney’s first time backpacking, but we had no trouble climbing up the trail to reach the hot springs later that afternoon. 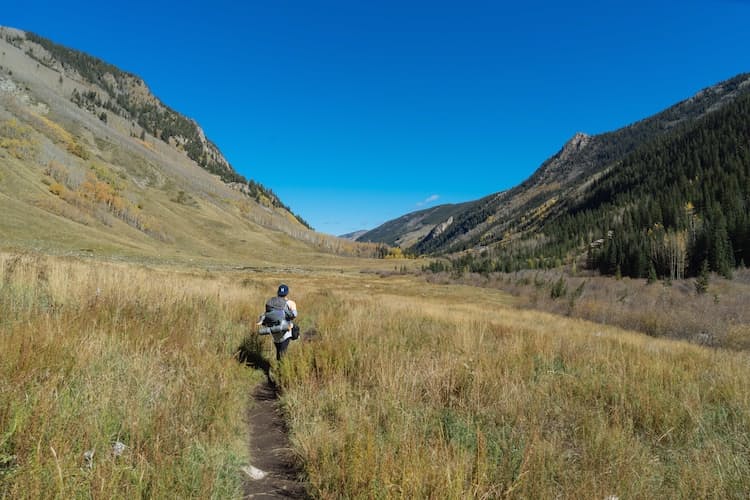 After setting up camp and catching up on some reading in the hammock, we decided to head down to the springs. I’m not sure exactly what we were expecting, but the scene that awaited us was straight out of a movie. In the midst of a snowy alpine landscape, 50ish late 20’s/early 30 somethings lounged in a 102° hot tub. Bulleit and boxed wine were shared amongst new friends, and a magnificent sunset was toasted with bottles of Fireball. Following this sublime soak, we headed back to camp and ensconced ourselves in sleeping bags, cooking dinner in the vestibule of the tent to escape the cold at 11,200 ft. A chilly night followed, but we were up bright and early wolfing down oatmeal and packing up camp. The trip back down the trail was just as beautiful as the day before. 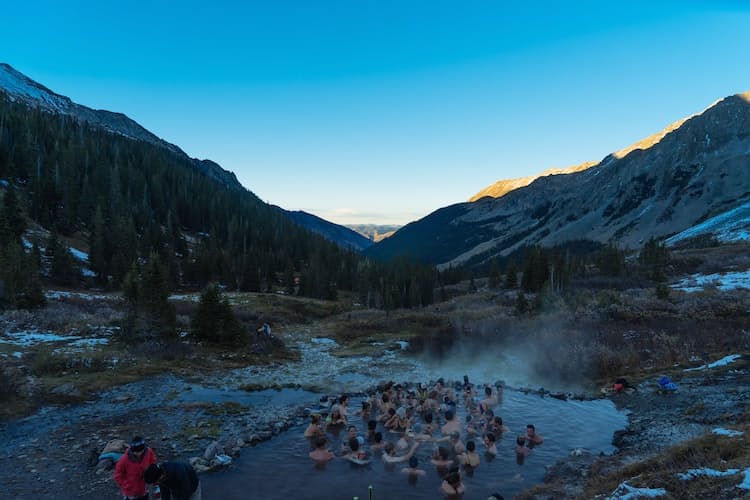 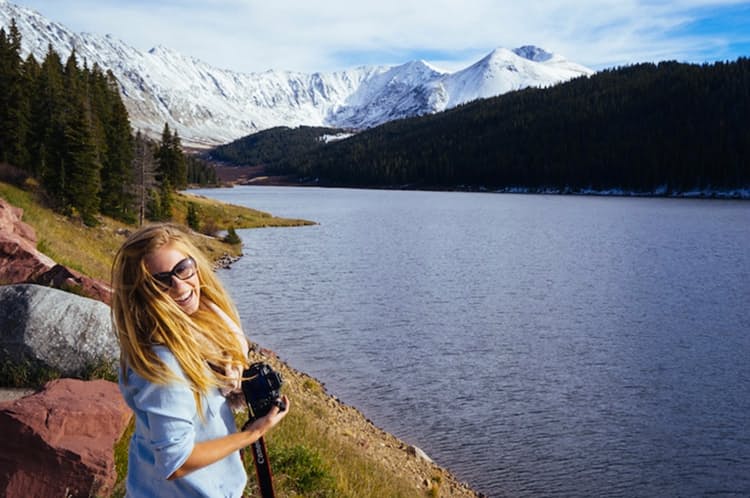 Sometimes you meet new people that you get along with. And then sometimes, you have the same taste in shoes, music, hats, whiskey and frequently solo weekend excursions. The internet is a funny place, and I’m grateful for the people that have become part of my life along the way because of twitter, instagram and random mountain adventures. Needless to say, I managed to squeeze a ton into 5 days of the Centennial state. I even managed to climb a 14er in the morning one day and get back to Boulder in time to do actual work! What else is there to say, Colorado? You’re pretty rad, and I’m sure we’ll see each other again soon. 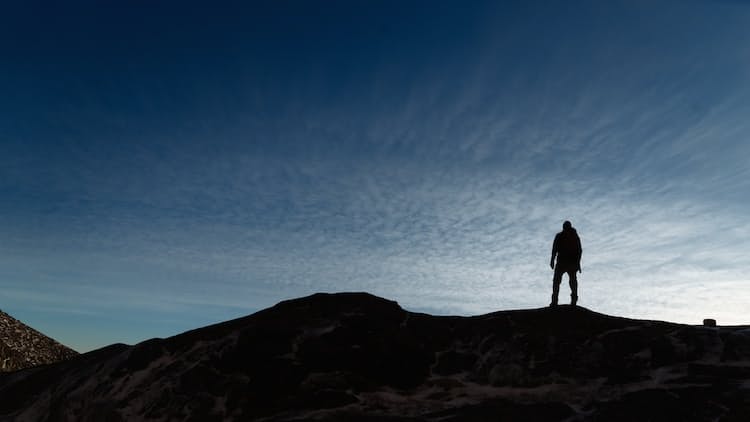 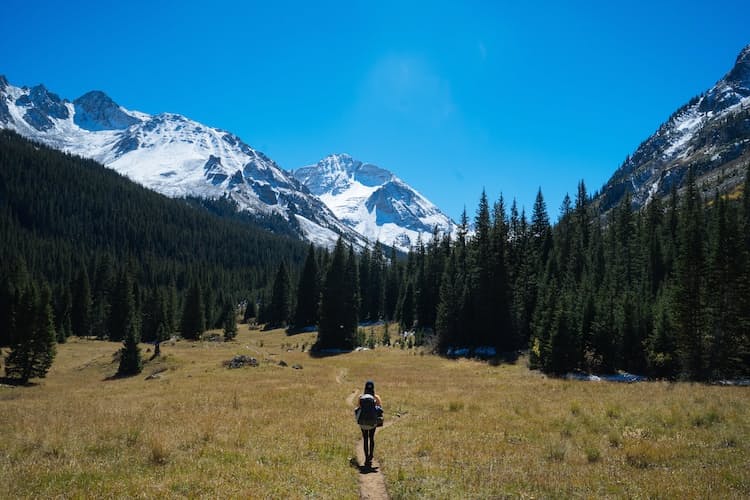 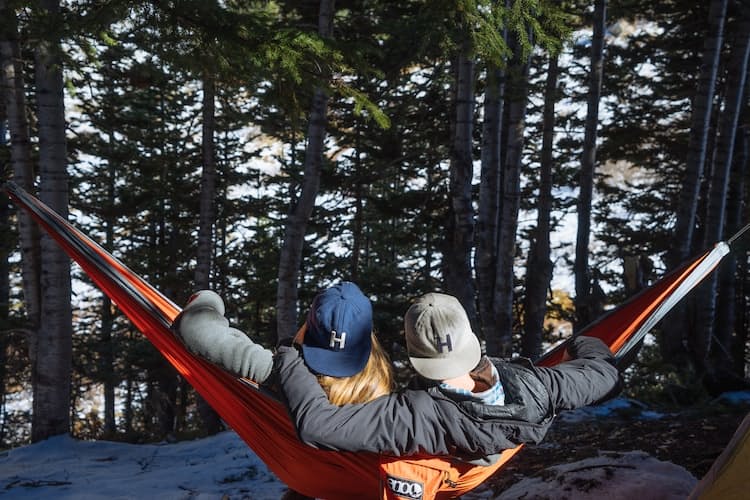 < Own Your A.M, Inspired by Harry's
Shelter: Steel Cabin >