A paddling and climbing adventure in the untamed Quebec backcountry, thanks to the Huckberry Explorer's Grant

Now is your last chance on the Huckberry Explorer's Grants 2.0 where you and a friend to win $3,000 in gear and go on the adventure of a lifetime led by pro photographer Chris Burkard. Click here to enter.

Ian MacLellan was selected as a winner of one of the original Huckberry Explorer's Grants by Nat Geo Adventurer of the Year Alastair Humphreys, to receive $1,000 and a full complement of gear from some of our favorite brands. Ian's proposed adventure entailed canoeing along the wild Moisie River in Quebec, Canada to seek out and climb the remote granite cliffs that lined the river. The following is in Ian's own words.

y harness is starting to itch and the camera on my neck is weighing on me. We are eleven days into a climbing expedition on the Moisie River and things are getting tense. Mikey Sallade is climbing through scrubby trees above, Mike Veazey (referred to as "VZ" hereafter) is belaying him, and Ri Fahnestock is anchored a few feet below me, waiting.

From my perch, I look out over the river 300 feet below and am overwhelmed by the sweeping immensity of the Quebec landscape. I've been having nightmares about the rapids we'll face in our canoes. 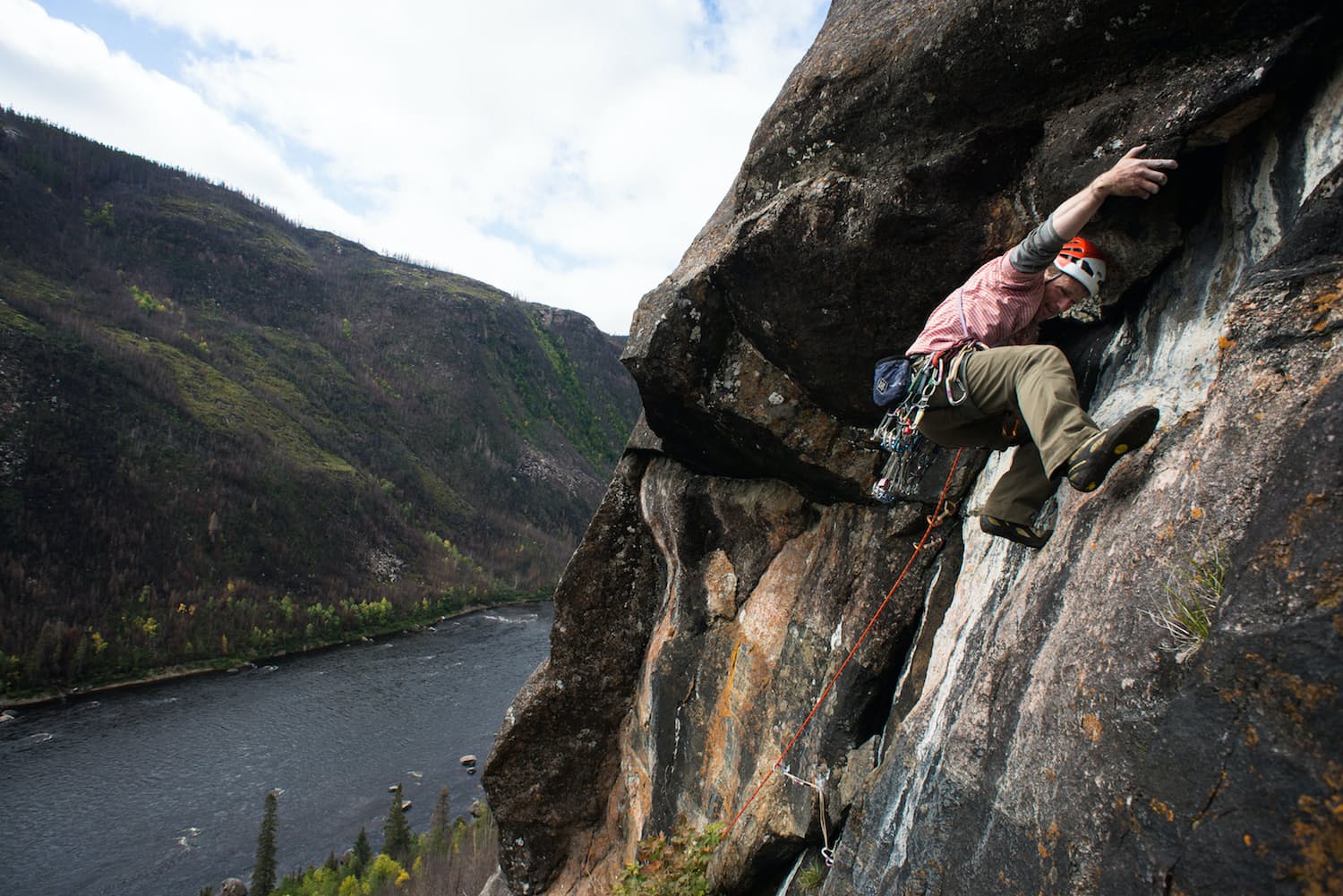 My second camera is tucked under an extra long rope at the bottom of my backpack. We need the long rope for the next pitch. I take out my camera and hang it momentarily around my neck so I can wrestle out the heavy rope. I stuff my camera back in my backpack, focus on flaking the rope, and notice a dark object plummeting into the dark spruce below. Ri only barely dodges the object as it comes barreling by him.

“What was that?” he calls. Rocks fall often on this cliff, but usually with some holler of a warning from above.

“That… was Ian’s camera.” VZ responds.

In disbelief, I grope into the bottom of the backpack and come up empty. My camera is gone, along with half the trip’s pictures. I silently hang my helmeted head against the cliff. I'm here to document the exploration of previously unclimbed cliffs and without the pictures, all I’ve got are cold feet and a few new scars.

We are in a middle of nowhere corner of an untouched cliff on a river that's only accessible by float plane. Why am I here?

I search until dark for the camera and am haunted by new nightmares of a rainstorm coming and destroying all my photos. The next morning, we find three of our dry bags and a climbing rope destroyed by porcupines, another loss to the river. The rope is cut in so many places it would be more useful as fuel for the fire. We spend the whole day searching for the camera and Ri and Mikey find it resting on a ledge. It's busted, but at least the pictures survived. I sink to the ground and shut my eyes. A grouse hauntingly beats its wings nearby. We are in a middle of nowhere corner of an untouched cliff on a river that's only accessible by float plane. Why am I here? 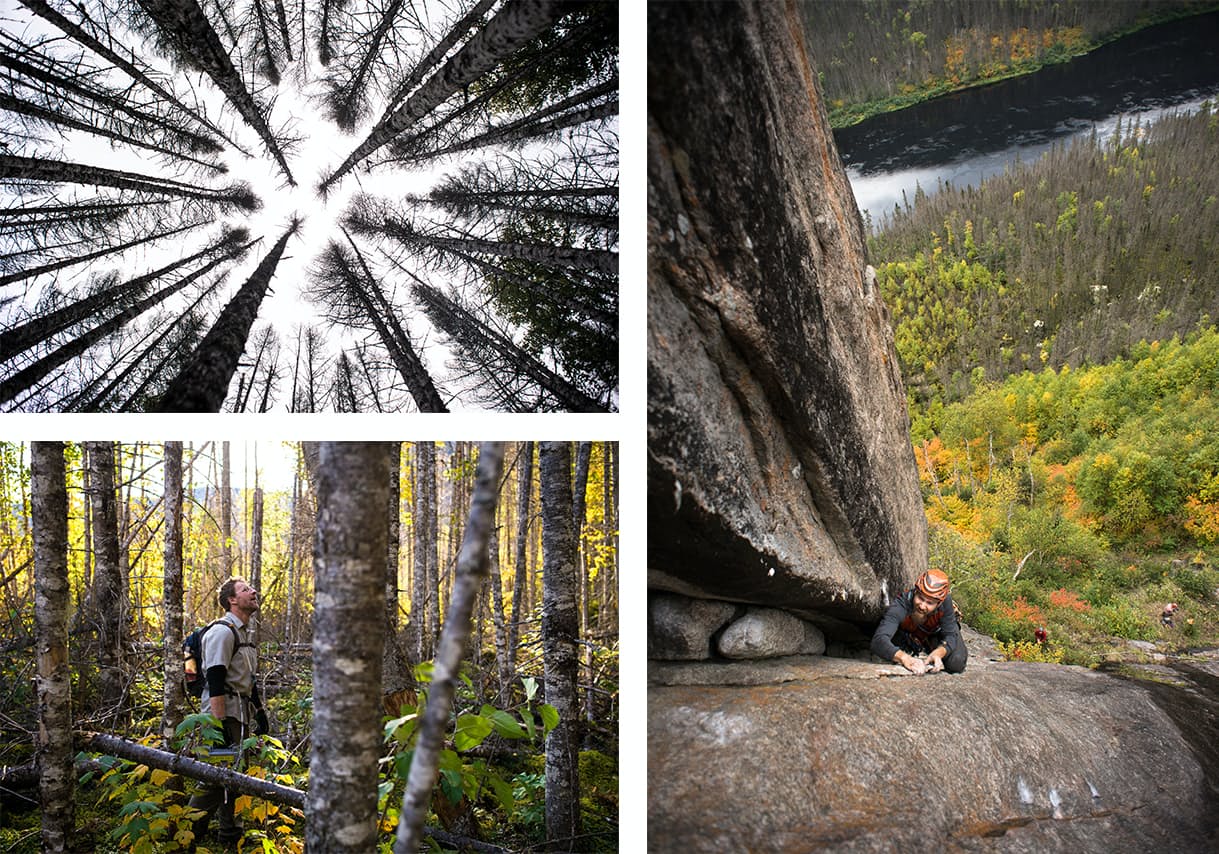 I ran into Ri more than a year ago at a climbing competition in Massachusetts. Pop music blared around us as he told me about his search for the closest, far away place for his next climbing adventure. He had explored Quebec via Google Maps, clicking his way through the mountains and rivers, until he stumbled upon a photo of cliffs on the Moisie River.

No roads or railroads intersect this wild river. We drove 15 hours north from New Hampshire to Sept-Iles, Quebec, an industrial mining town near the mouth of the river. We spent the night outside the Sept-Iles airport, sleeping in our well-used Subaru Forrester. 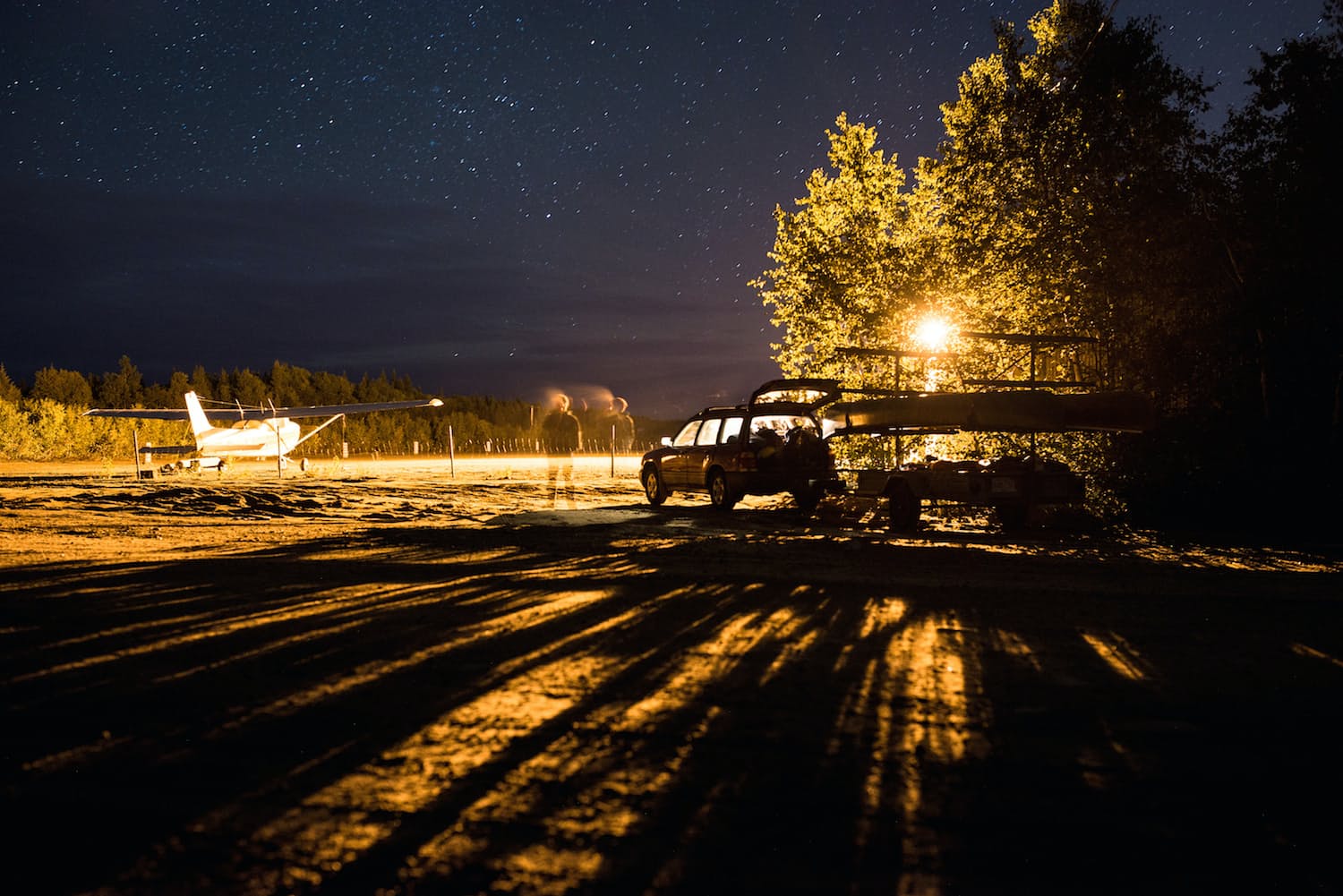 The next morning, we loaded our canoes, hundreds of pounds of climbing gear, three weeks of food, and enough camera batteries to last a year into a small float plane. The pilot casually remarked that we might not take off on time because of high winds up north.

After six hours of waiting, the plane carried us over the river valley, giving us a preview of the miles of unclimbed cliffs that loom over the raging river. The landscape is dotted with mountain lakes and huge swaths burned-out forest. 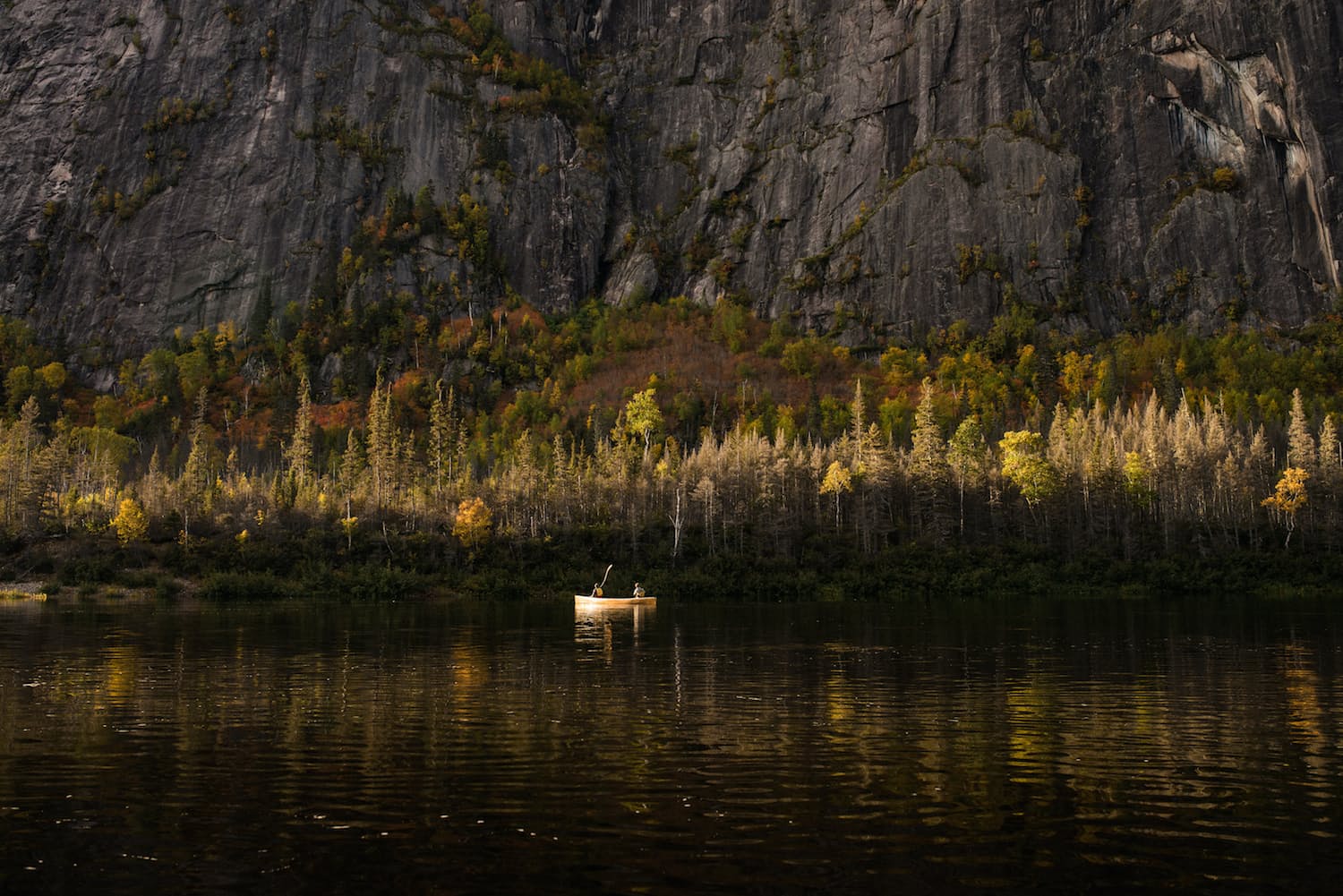 It felt like we were falling out of the sky as the plane took a steep bank turn to twist between the high canyon walls. Our bags tumbled in the back and we held on tight to our seats. We landed and unloaded 165km from the river's end and instantly started gawking at the cliffs that surrounded us.

The minute we start climbing, snow begins to fall.

Welcome to the Moisie, the land of endless rain and frozen tents. Ri falls four or five times while attempting the first grassy moves of our first climb. We give up and move 30 feet over for a different way up. There's just enough snow that I can muster a snowball to throw at VZ, which he swings his paddle at.

Each morning we commute upriver and build trails to the cliff faces. On untouched terrain, climbing easily falls to the wayside. Garden snips and limb saws are more useful than chalkbags and brushes. We spend hours ripping off man-sized mats of moss and hurling boulders off of the routes, in hopes that we find climbs worth bragging about. 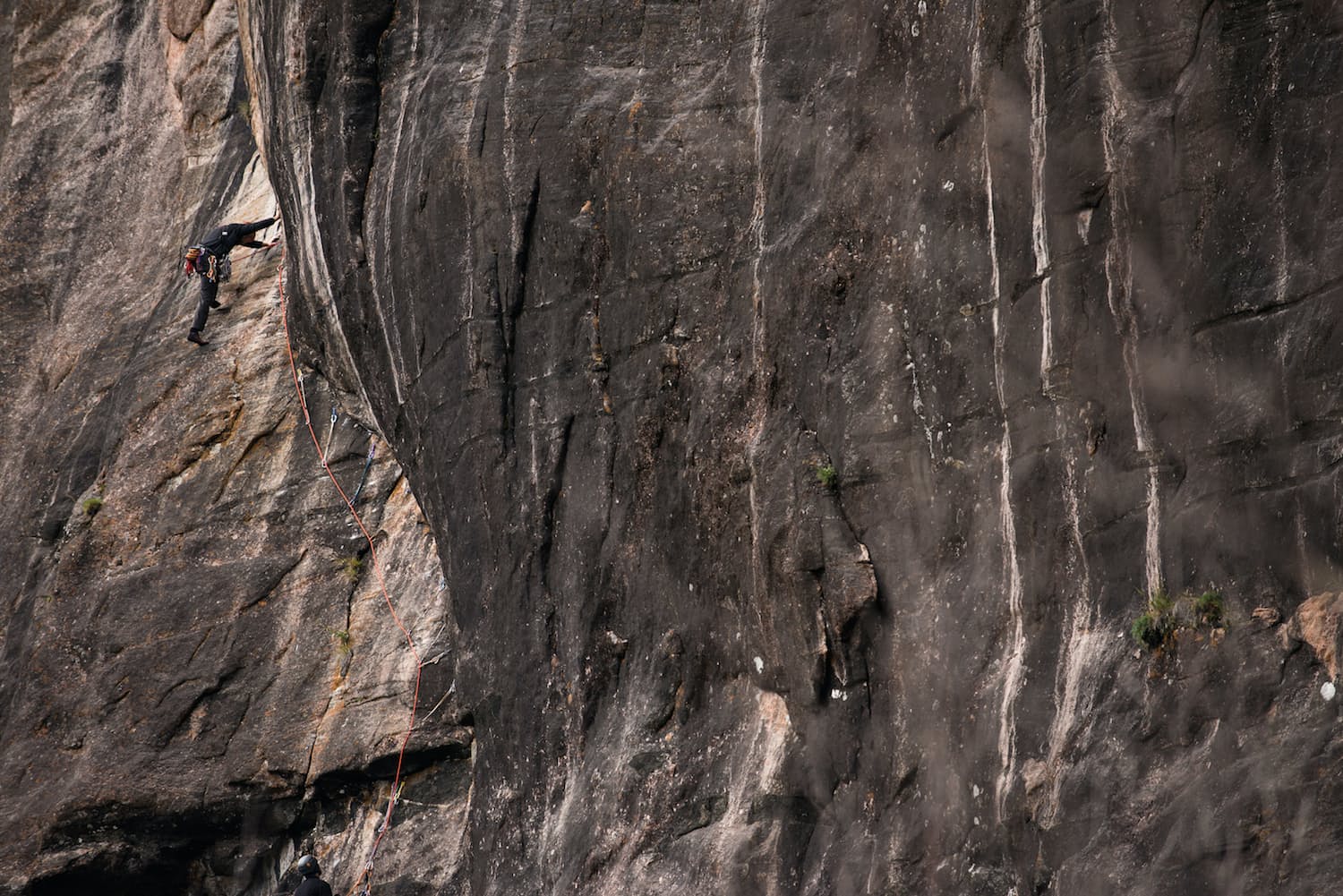 I'm surprised by the scale of everything. What appear to be finger-sized cracks through binoculars turn out to big enough to fit the four of us. We set what we think will be achievable goals and are pushed back again and again. There are no easy routes to the top and after a week of climbing what we've deemed the King Wall, we never make it to the summit.

We do put up one amazing pitch called Anniversary Crack. With a wealth of stellar climbing moves from fist jams to face climbing to a super awkward high foot, it became the climb we kept coming back to. Sadly, the rest of hard-fought climbs were unremarkable. "The Other Woman," was a meandering four pitches ending at a non-summit in a bowling alley of falling boulders won't attract many climbers to the Moisie. Our first route, "Tell My Wife I Love Her," wasn't bad, but doesn't have much promise past a sketchy 5.9(ish) beginning. Hundreds of potential climbing routes surround us, but none were the epic discoveries we hoped for. 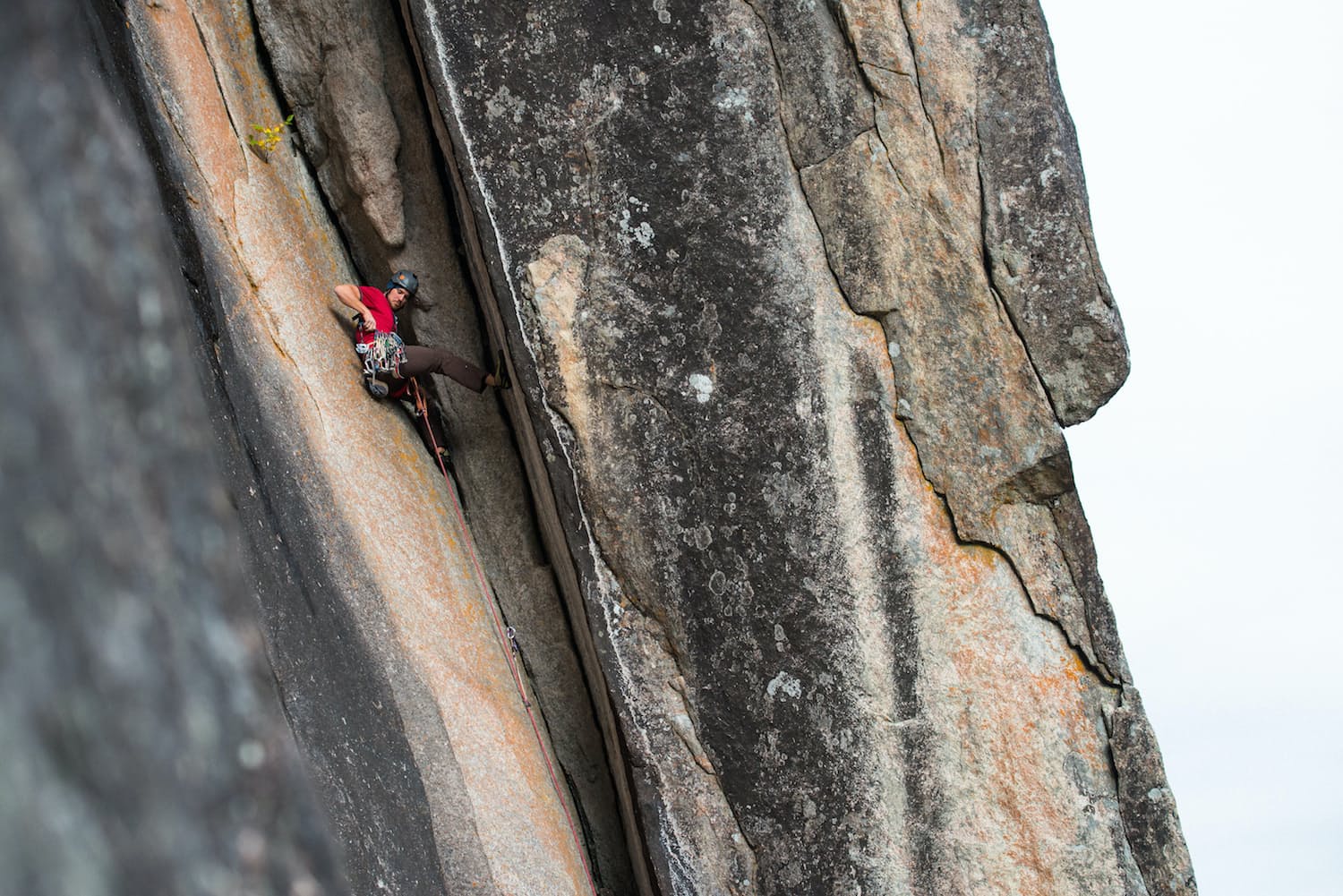 In our heavily loaded Old Town canoe, we're clearly no match for the rapids that roar ahead. After long discussion and careful planning, we make it through the first set. We pinball through the second, weaving through waves, picking up speed, and slamming headfirst into a hidden rock. I gulp for air as a wall of frigid water hits me and the force knocks my GoPro mount off the canoe.

I'm soaked and shivering. The water swirls ahead and the noise of it fills my head. Moving water becomes solid and deceiving. Even the eddies can swamp a boat. I keep telling myself the only thing between us and the car is a few simple days of paddling. 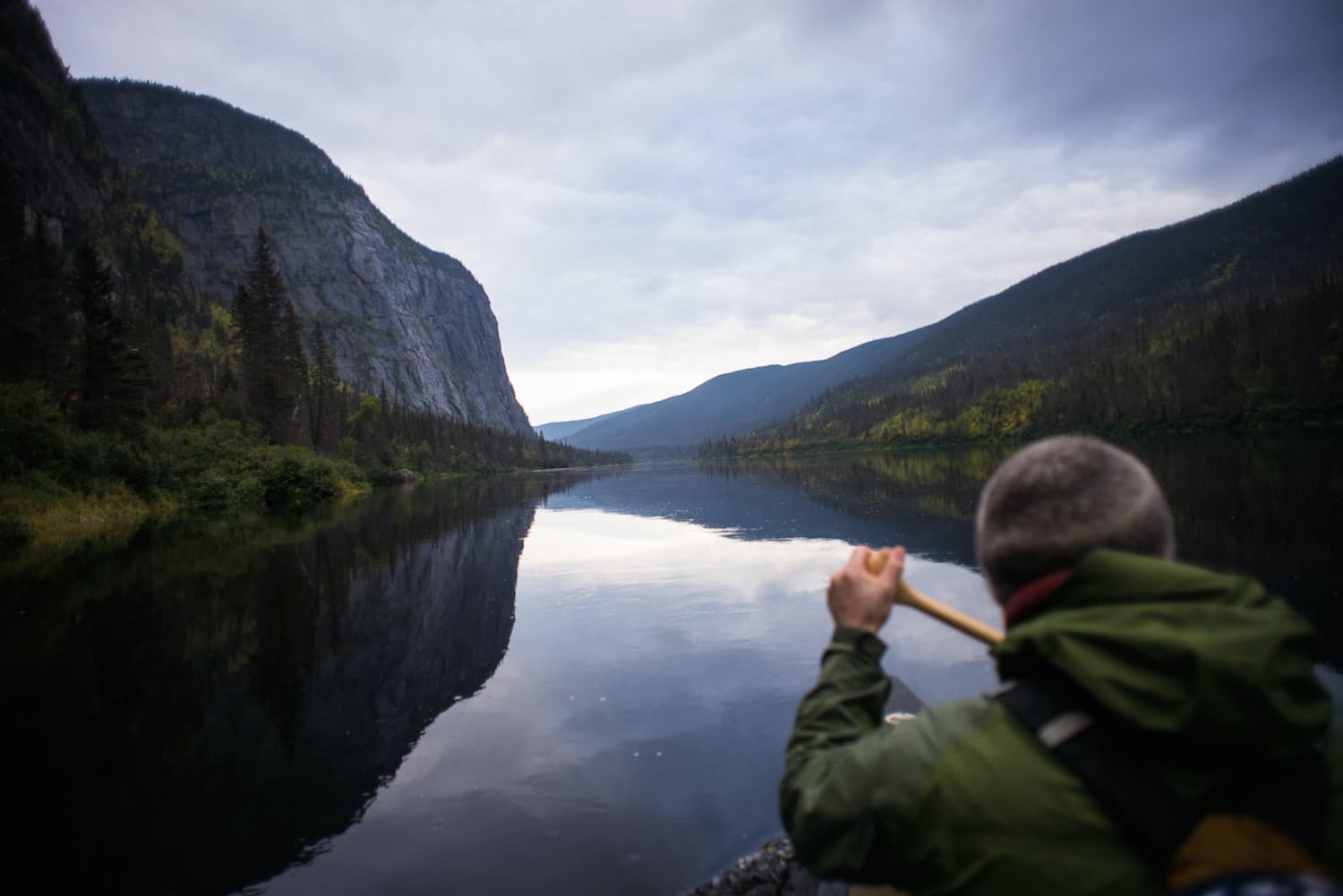 The icy plodding continues until dusk, when we arrive at the longest rapids yet. I know we need to scout them, but I can barely look. I know what we have to do and begrudgingly push off from shore. This should be fun, I think, as we bounce through rollers and rip around rocks.

“Grab on,” Mikey screams, as we slam into another hidden rock. I'm thrown into the water, losing my paddle in an instant. Time slows down.

We slip by the worst of the first section, only to be greeted by a wall of towering waves. The river is pulling our boat in like a black hole and we've taken on too much water to steer away. 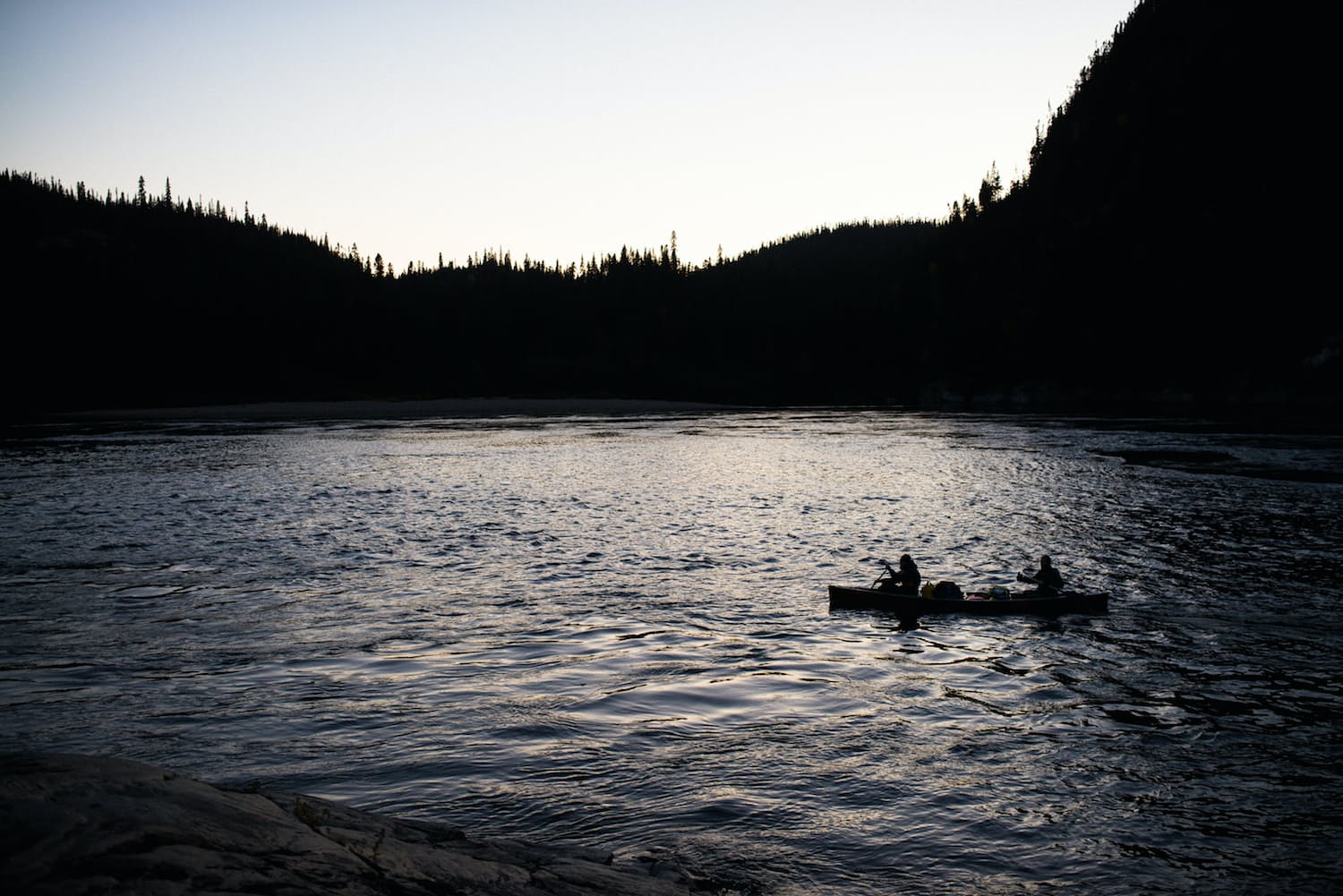 “Grab on,” Mikey screams, as we slam into another hidden rock. I'm thrown into the water, losing my paddle in an instant. Time slows down. I hold onto the boat and gasp for every breath as we move down the rapids. This is how I'll die, I think. It feels like minutes before Mikey takes control of the situation and together, we flip the canoe back over. Mikey is from Western Pennsylvania and for some reason I wonder to myself, at this moment, how he pronounces Appalachia. We work together to swim the boat to shore and as the water becomes shallower, I struggle to walk.

On shore, I'm still frozen, unsure of what to do next and overwhelmed by failure. Mikey has to tell me to strip down and change. I silently comply. The dry bags are full of water and I put on the driest clothes I can find and hunker down in my moist Nemo sleeping bag. I down a bottle of Tang and five energy bars. I stuff hand warmers in my jacket. 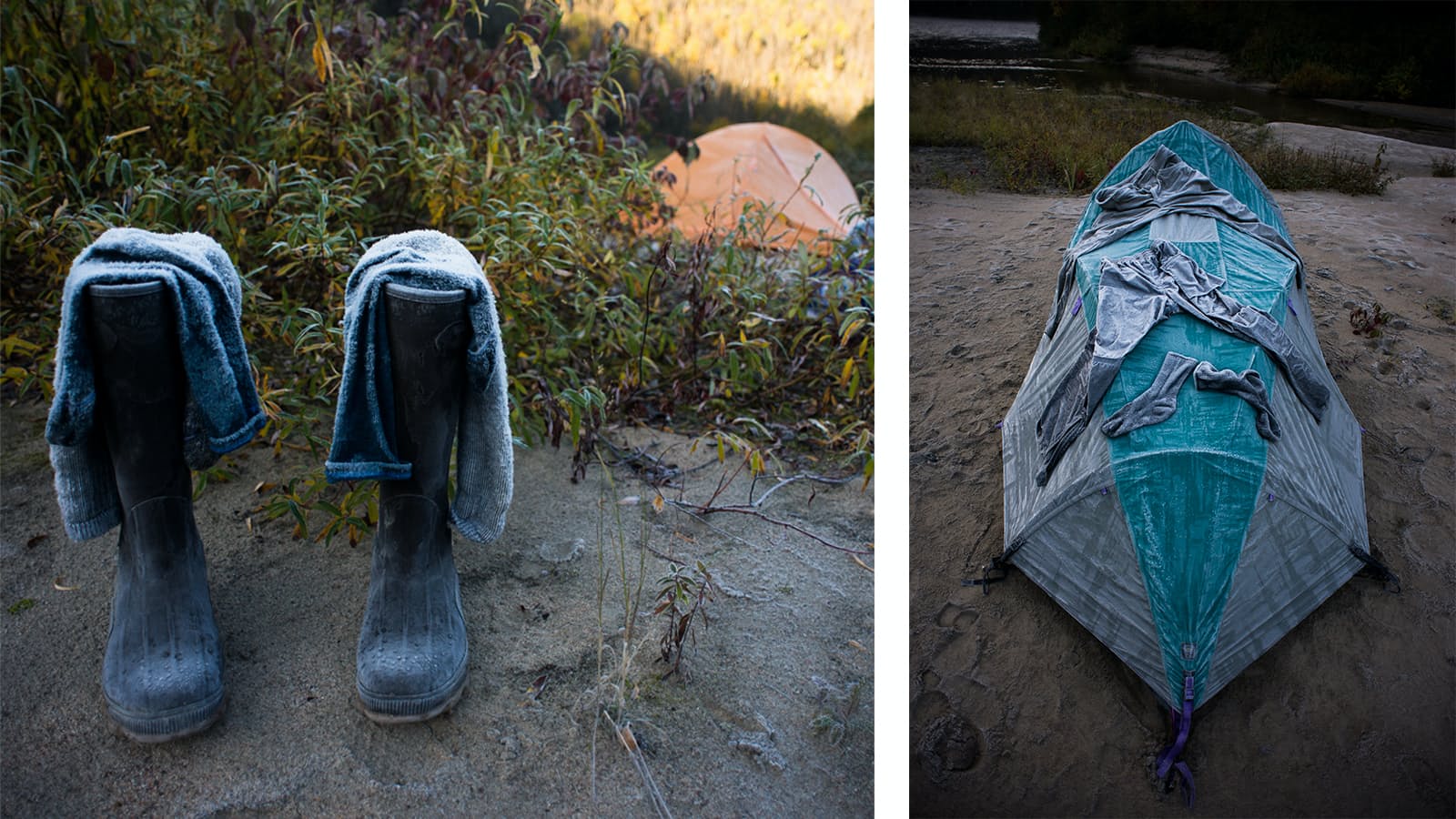 As I warm up, I start to do the math. We began the trip with six paddles. Earlier in the day, VZ broke one. Mikey and I just lost two more, so we have three paddles remaining, all of which are in the other boat. I'm certain the trip is over. Mikey, however, stays very calm. “Just keep talking to me,” he says. How does he stay so happy?

Noticing we're in trouble, Ri and VZ try to canoe across the river to us, but are swept downstream and end up stuck on an island out of view. Are they abandoning us? As Mikey goes off to find them, I sit alone in my sleeping bag and start to sing to myself. I imagine how a helicopter could come rescue me. A few hours later, Ri and Mikey return with a plan. I'm in no state to argue, so when they tell me to sit in the canoe, I sit in the canoe. They wade me and all our gear across to the island in complete darkness, water rushing all around us. A solemn mood takes over the group. Nobody is talking about it, but we all know we can't continue without another paddle. I gaze upward at the immensity of the Milky Way. 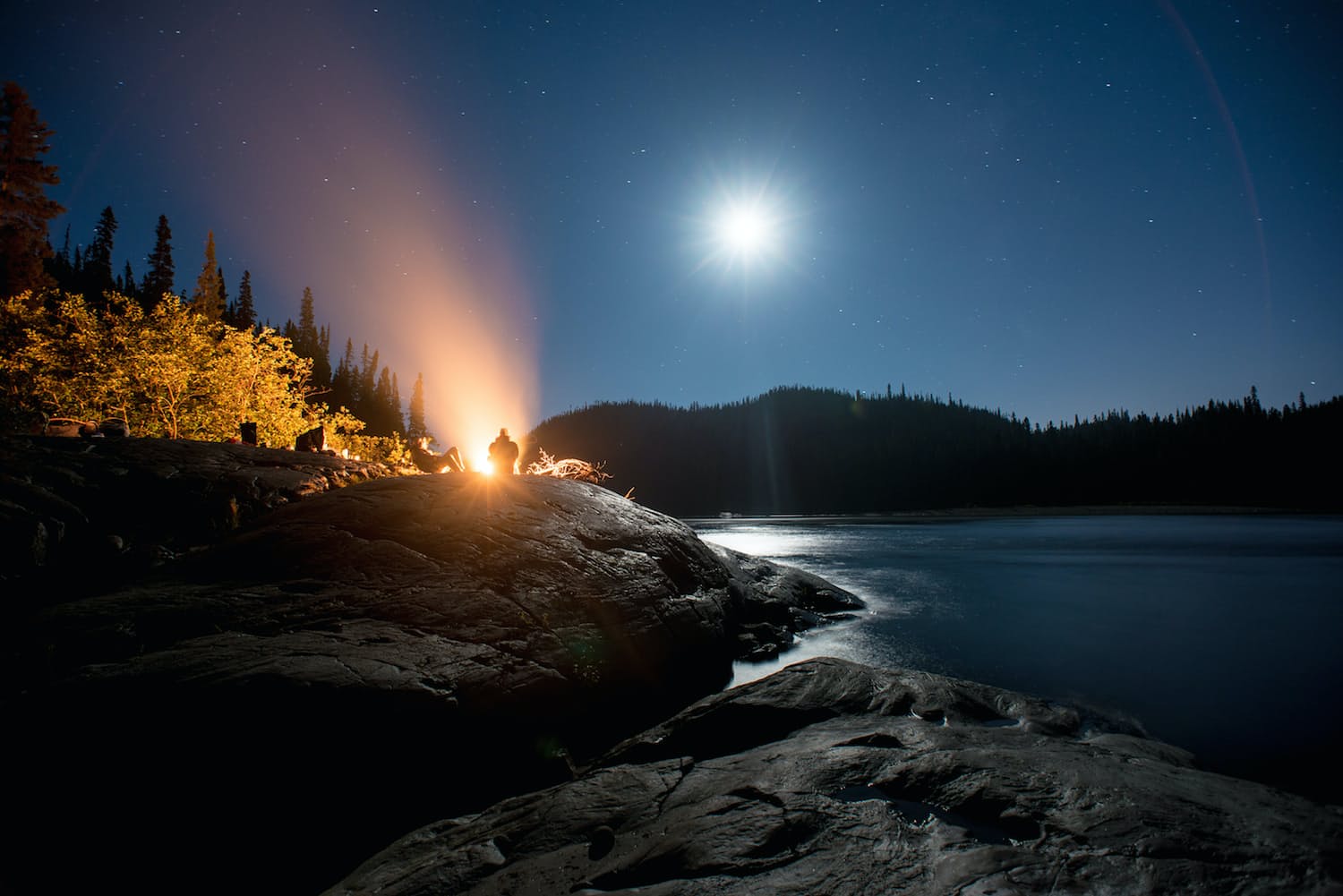 Up ahead, a light shines. VZ stayed on the island and furiously worked to prepare a campsite so we could have warm food and a fire when we arrived.

We are so busy with setting up camp that VZ doesn't even tell us the news right away. He found a paddle, evidence of another canoe trip gone awry. I think of the two paddles we left behind, floating somewhere down the Moisie. I hope they come in handy for the next travelers in search of adventure. [H] 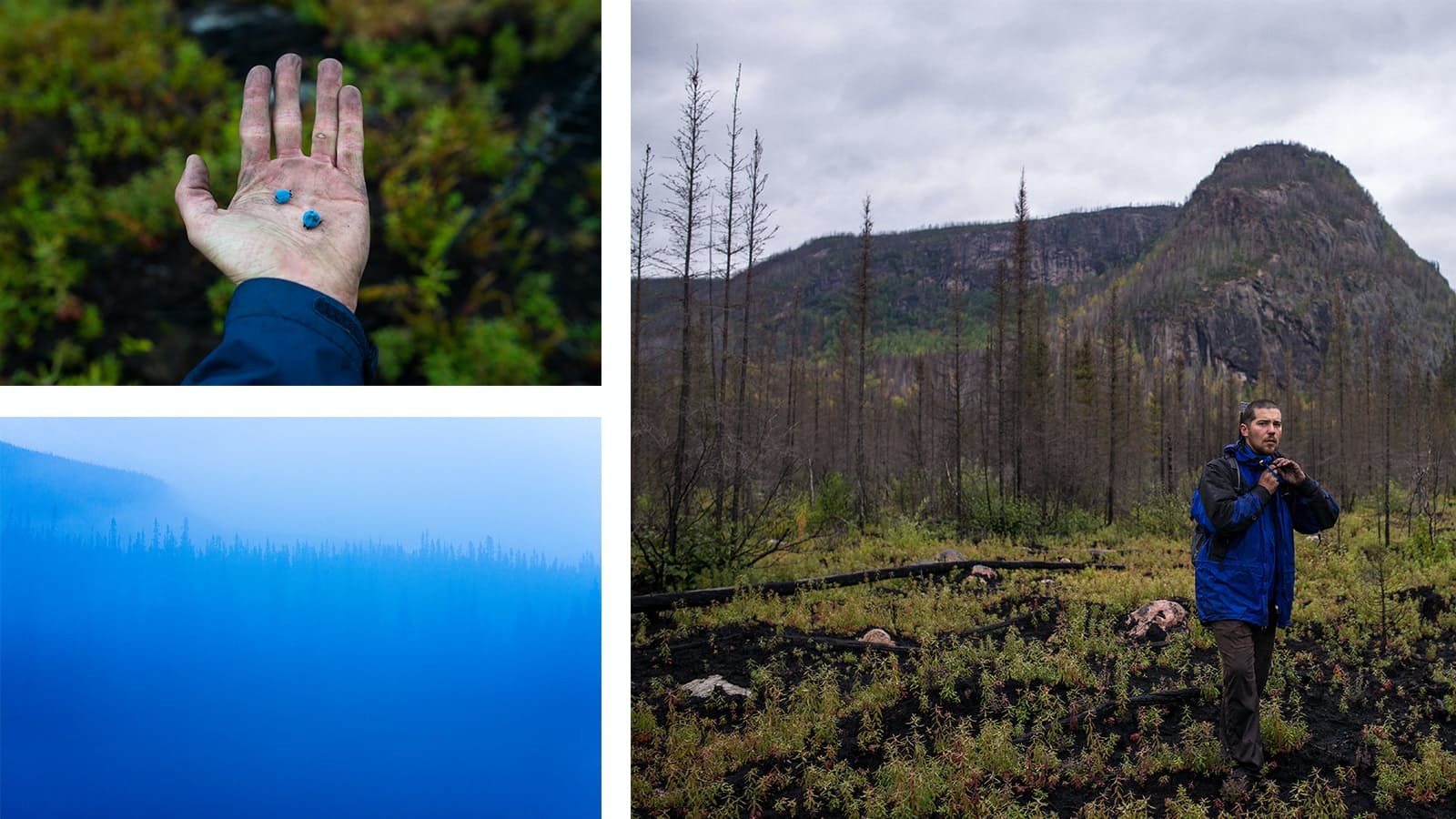 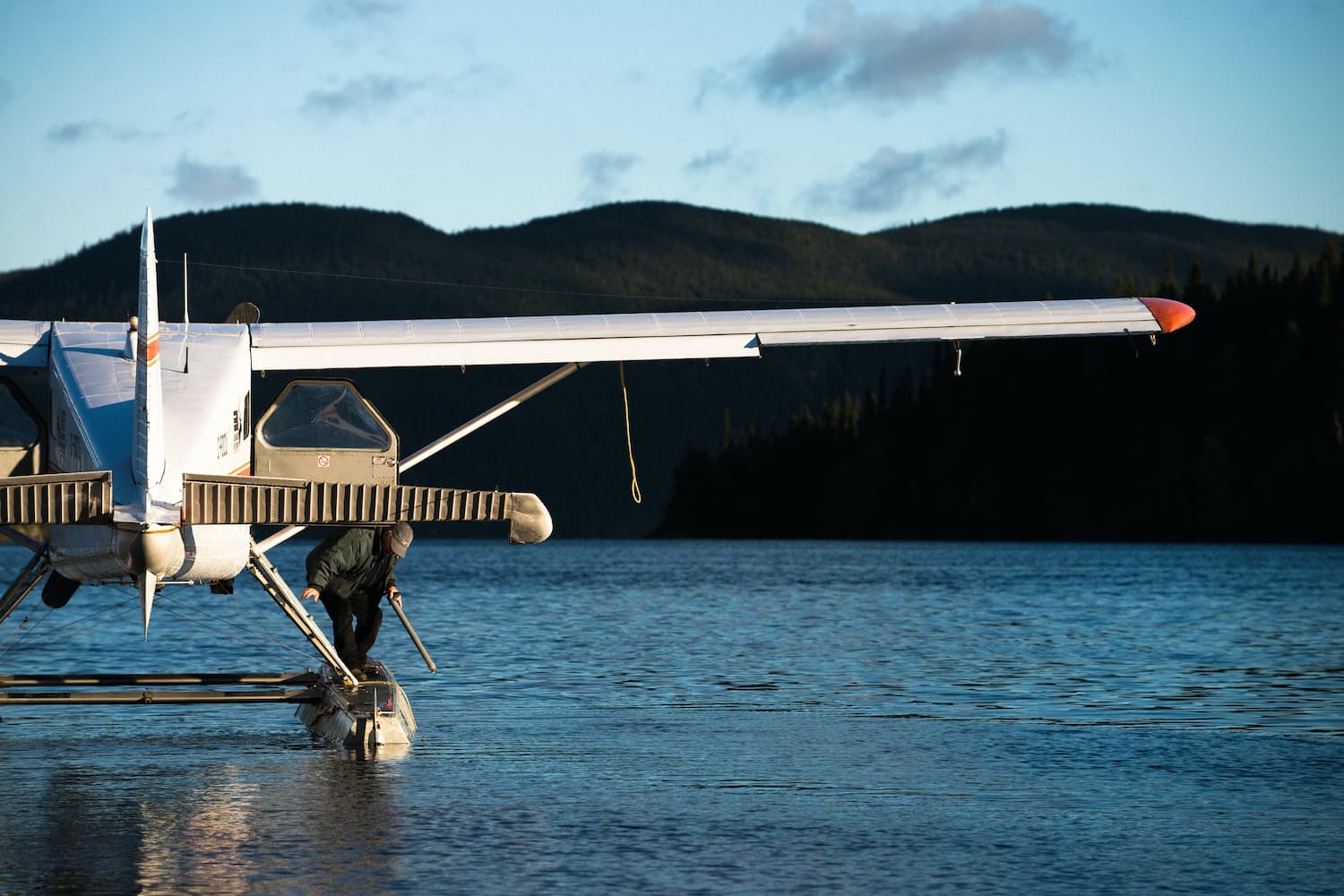 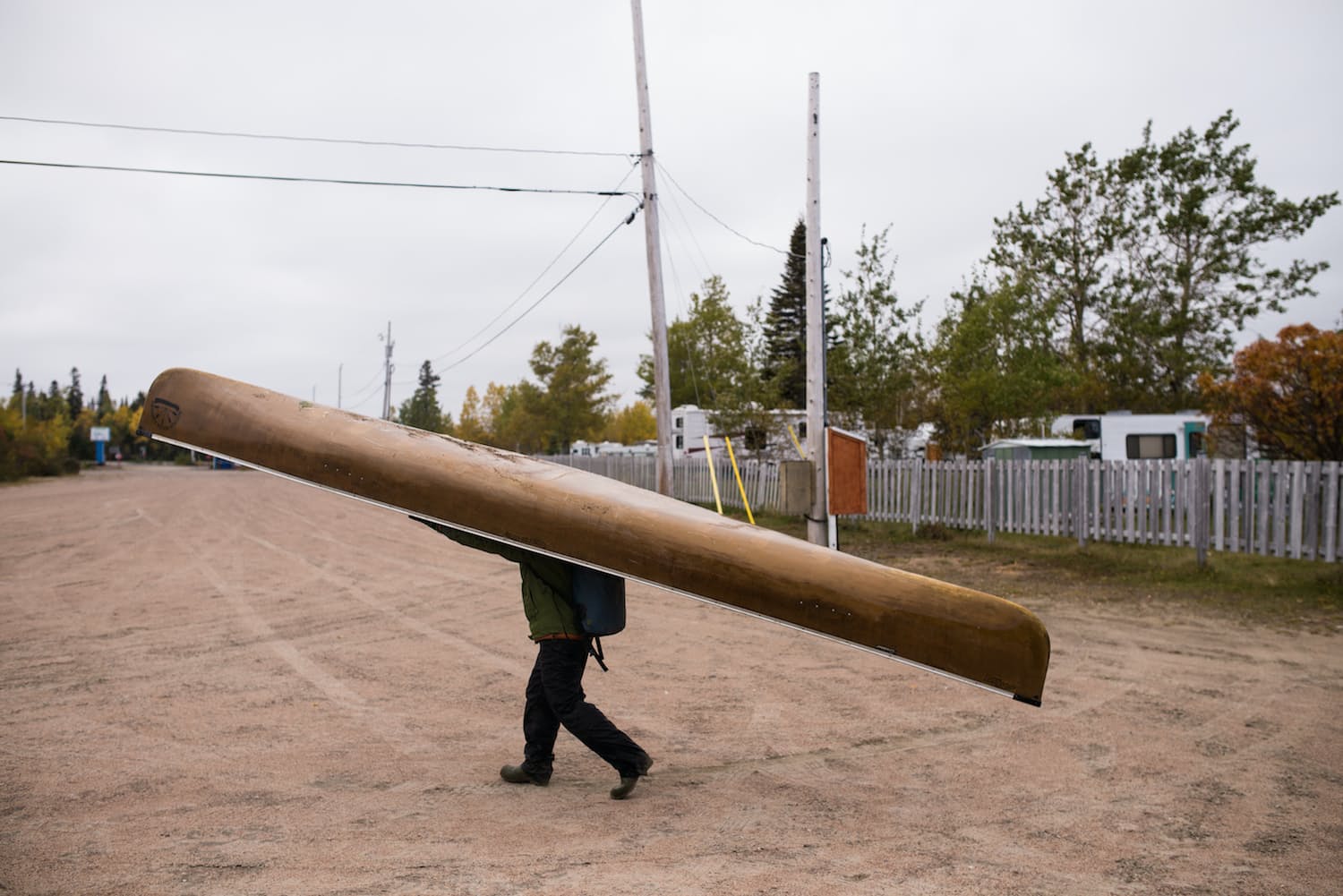 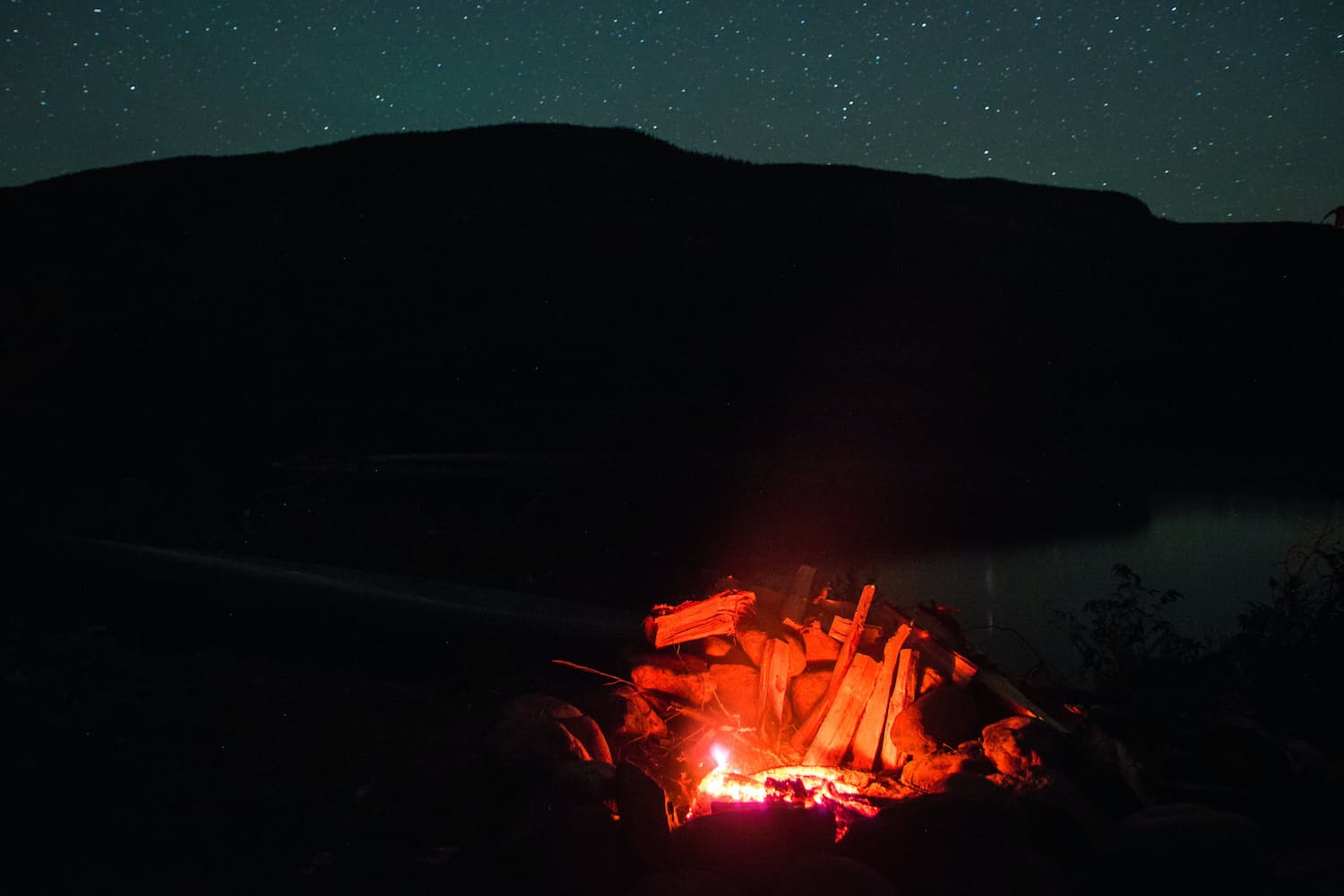