Adventure doesn't always go according to plan. Here's a story about making the most of a bad time

[Editor's Note] Our friend and Huckberry contributor Alistair Farland was riding his motorcycle from Alaska to the tip of South America, taking a slightly more 'indirect' route, and following the story wherever he felt it took him — like a divining rod for adventure on the open road. He'd already sent us dispatches from Burning Man's Playa, got helicoptered off Half Dome, and dodged tornadoes in the Midwest, but somewhere between the cornfields of Nebraska and the Tail of the Dragon in North Carolina, the highway intervened.

We left Alistair's story below in its entirety, to celebrate his spirit of adventure and incredible attitude. Remember that this is neither a cautionary tale, nor one of reckless abandon. It's simply the story of a life seized by the horns, and embraced for all it's worth. Alistair's story hits especially close to home, because amidst every effort we put forth, at the end of the day, the things we cannot plan, are the things that define our character.

Kindly stay respectful in the comments, and keep his family in your thoughts during this difficult time.

Thanks for the laughs Al, we'll see you out there. [HB]

“You’re probably going to die on this trip, just saying.” 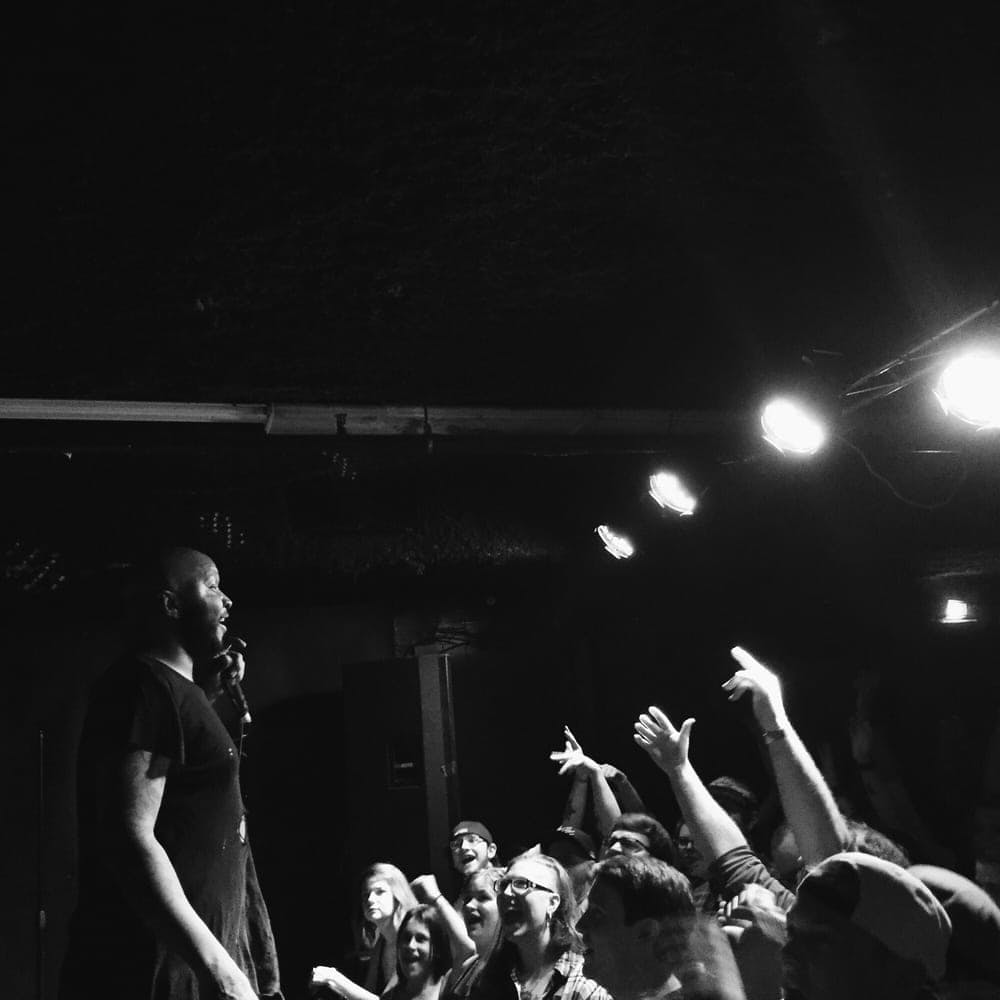 bviously, these aren’t the best words to have ringing through your head as you barrel down a slippery road at 80 miles an hour. Trying to stay in control when the wind speed is something stupid, makes riding your faithful Kawasaki 650 motorbike at angles nearing 45 degrees, slightly less than safe.

People always tell you when you first learn to ride that you can lean slightly to adjust for wind. This advice is perfect on a lonely road in light winds, as you can lean the bike easily and keep your revs high (thus lowering your center of gravity and thereby keep the bike stable).

However, this advice sucks when said lonely road is populated almost exclusively by large trucks, semi-trailers and said wind is not light, but rather gale-force. You also get buffeted with a mild tornado each time a giant semi trailer passes. These tornados often carry small presents; small gifts from the trucking Gods, sometimes in the form of dirt, old toilet paper and once (my personal favorite) a used condom.

Santa's got nothing on the truckers of Highway 80. 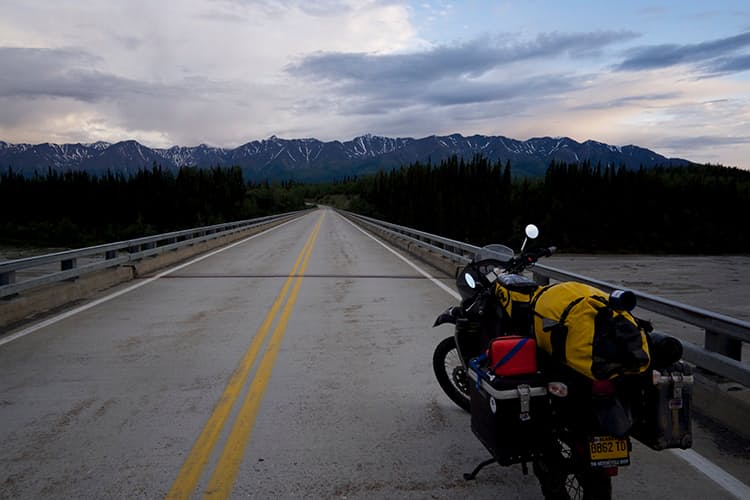 I am 24 years old, Australian, and roughly three months into a year-long journey that will eventually take me from Alaska to Ushuaia, deep in South America, jumping through some 20 or so countries along the way. So far I have ridden over 10,000 miles, woken up to bears in my camp, appeared in court, had my helmet stolen (come on Salt Lake City, really?!) ridden as far north as you can possibly go via roads on this continent, and broken down more times then I care to count.

It’s been an interesting, challenging and incredible three months so far. General reactions are always funny when I talk about what I am doing. Most laugh, glance at whomever they’re with, then say, “really?!” My personal favorite so far was a guy I met in Vancouver, who burst out laughing and thrust a 20-dollar bill into my hand and told me to buy myself a beer and enjoy it as I didn’t have long left on this earth. Real encouraging, that fellow. 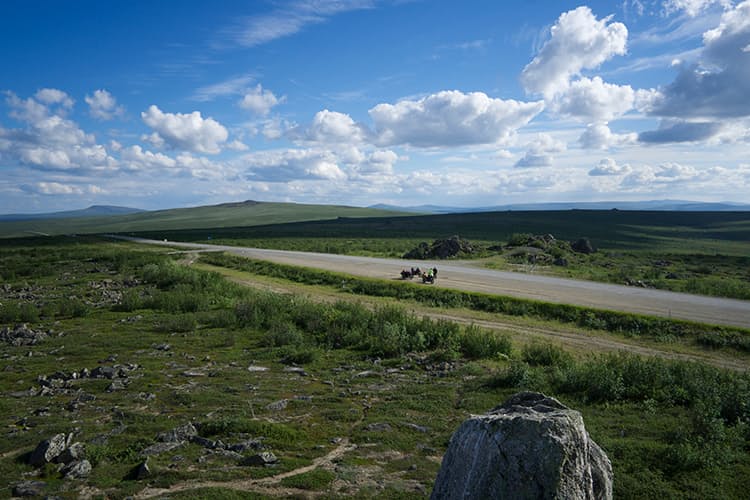 “Come on, it can’t get any worse,” I mumbled quietly to myself as I pulled on my helmet. I had made a quick pit stop to refuel bike and body (latter of which, in the form of a hot dog). I also realized that I had no sense of shame left, as I found myself warming my hands on the glass that, until a minute ago, was holding said dubious hotdog.

I was reminded that you should never say those words, because almost on cue, it began to hail. Hard.

Plans change, weather sucks, and breakdowns happen, but you can’t let any of it get to you. I have found that whenever a breakdown happens, its actually kind of refreshing, as fixing the bike is the only thing that you have to focus on. Adventures are important, because the people you meet are amazing, and learning to adapt to the road is exactly like the gale force winds, or discarded garbage you're forced to dodge. Sure, things can slow you down, but the only thing that will stop you is you. 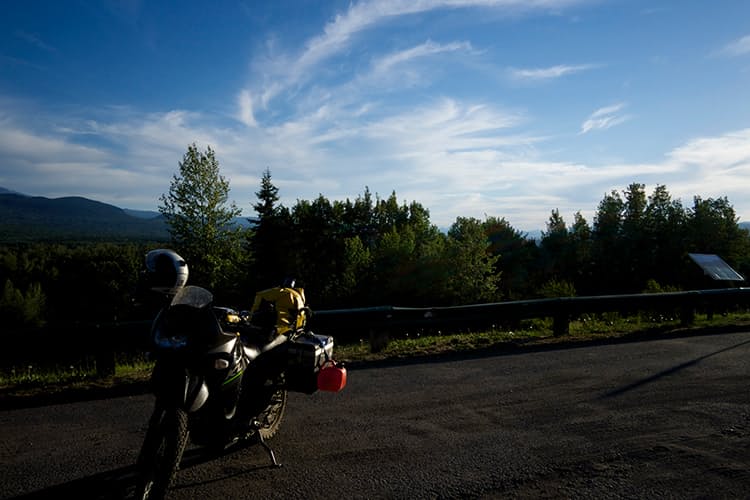 Back out on the road, I laughed and glanced up at the small hailstones raining down. I looked over at the family of three in the car near me and nodded at their incredulous faces staring at my motorbike getup. Then I pumped up the AC/DC on the headphones, and gunned the throttle — because after all, sometimes things are just going to suck. But as an ex-Marine told me in Alaska, you just need to embrace it.

Images ©: Alistair Farland — Whilst I Was Out