A Whole Lot of Mush 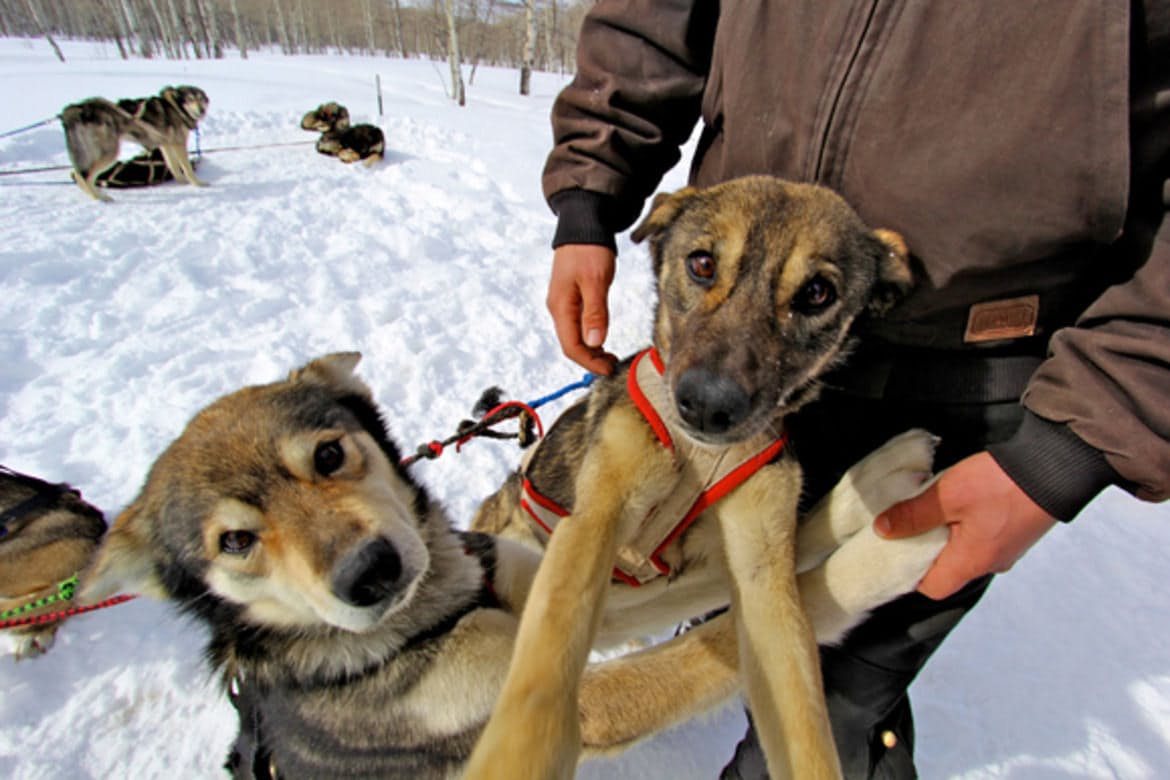 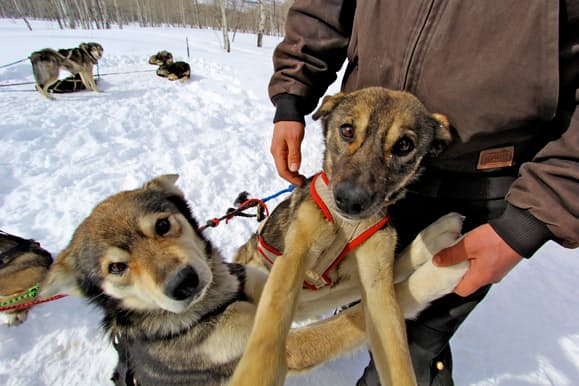 I always thought dog sledding would be romantic. Northern lights, dogs howling at the moon, jagged mountain peaks—you get the drift. That’s the vision The Call of the Wild left me with, although I’m sure that’s not what the book was about. Last winter, I decided to make these dreams a reality. Only it didn’t quite turn out the way Jack London had me picturing it.

I booked a trip with my Dad with Mountain Musher outside of Vail, Colorado, where my friend, Landon, was an experienced musher. From the moment I crawled into a crowded van filled with Texans, things weren’t what I expected. First of all, there were Texans. Secondly, I was in a van. Things only became less dreamlike as we arrived at the dogs. 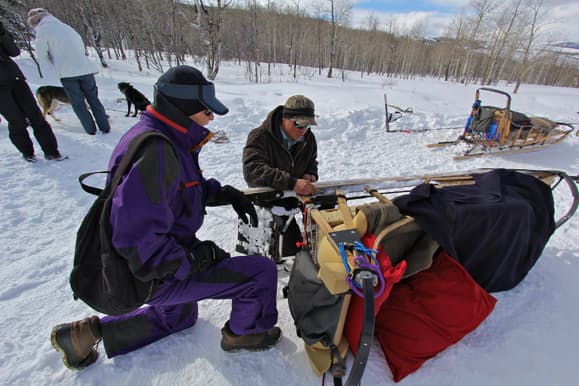 Contrary to popular belief, sled dogs are not Siberian huskies. They’re a mix of breeds found in the Arctic and subarctic regions, ranging from McKenzie River dogs to Eskimo dogs and beyond. This mix makes them faster, taller, and increases their endurance over that of an average purebred. They’re also not pets. The dogs are bred and trained to perform as athletes, and pack mentality reigns sovereign. I approached the dogs with Landon, their musher and master, and watched as they welcomed him but warily gave me the stink eye.

We loaded into the sleds—incredible wooden works of art that were built to bend as the dogs make corners through bumpy snow. Settling into the front of the sled between my Dad’s legs was not as romantic as I had originally envisioned, and neither was looking directly at the rear-end of the pack (below). I didn’t have long to think about it, though, as my friend stepped onto the sled behind us and we were off. 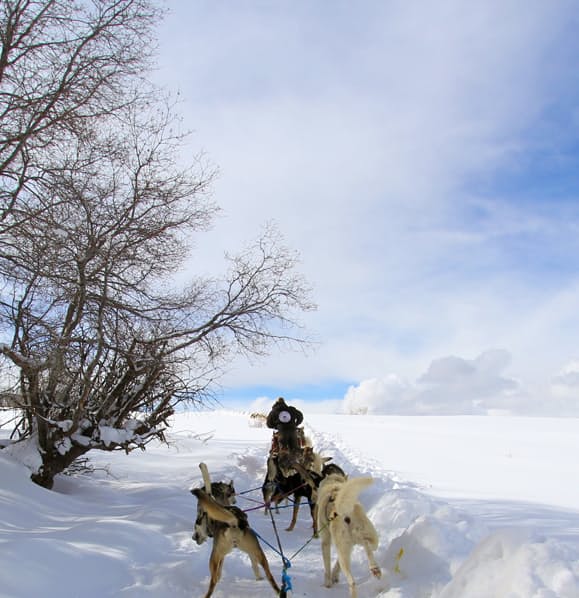 You never say “Mush” to a sled dog. It’s more like American football. “Hike” means Go, and “Let’s Go” will kick them into higher gear. Can’t stand the g-forces? “Easy” will bring them back down to speed. I found this one especially helpful while mushing the dogs behind my Dad, his life in my hands and my right foot pounding uselessly on the brake while my friend took photos of the catastrophe from a safe distance.

We stopped for hot cocoa, and as the lead dog bit mercilessly into the nose of a lesser canine, Landon complained about what a balmy day we were having. It couldn’t have been over 30˚F. He explained the dogs love -20˚F, when they’ll run for up to 100 miles a day in a regular training season. As a seasoned guide who has worked with record-setting musher John Baker in Alaska, he sauntered off to casually break up the brawl that was drawing blood between the two dogs. I sipped my hot cocoa and watched. 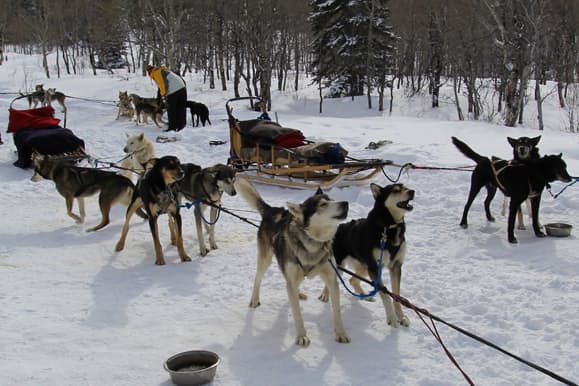 The mushers refueled, we headed back to the trail. Landon explained the pack dynamics as we heaved around like a pair of paraplegics in the sled, which was duct taped together for maximum bend. The dogs, it seemed, had a pecking order much like high school. But as professionally trained athletes, there was no stopping for a bathroom break. The mutts flew over the snow at high speed, simultaneously barking and letting the poop fly with gusto. The shit, as they say, hit the [sled].

After cutting through a bit more single track, the dogs came to a halt, and the ride came to an end all too soon.

We rejoined the Texans waiting at the van, and when I jumped inside, a distinct smell of dog poo filtered throughout. I jokingly asked who had stepped in some, checking my own boots to be sure. And then, a few hours later, it dawned on me—the boots weren't the problem, it was that smelly light smattering, smeared across the front of my jacket. Jack London would be proud. 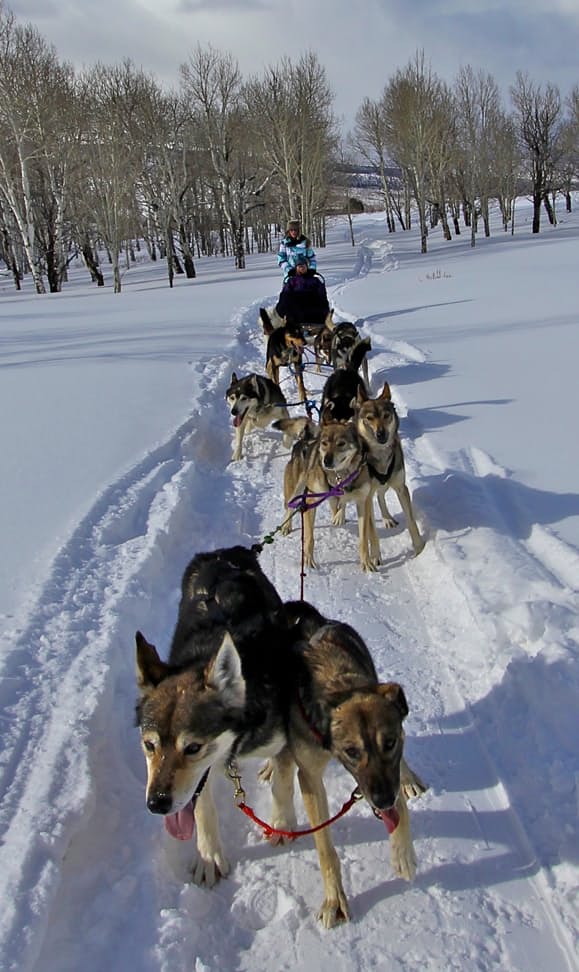 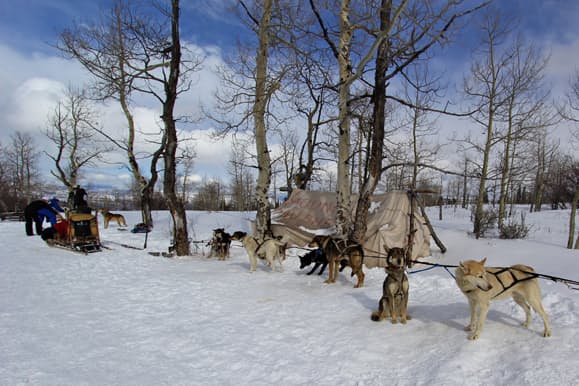 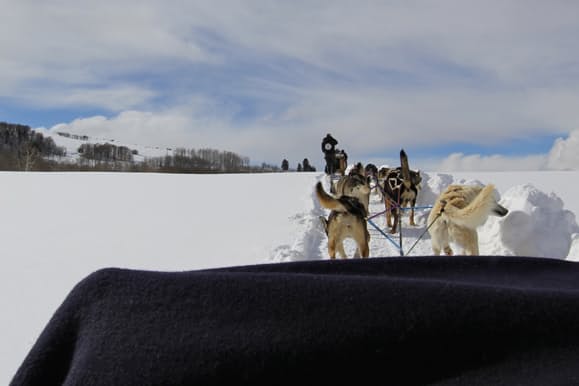 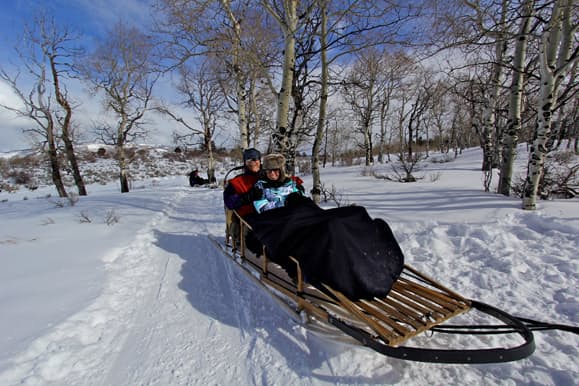 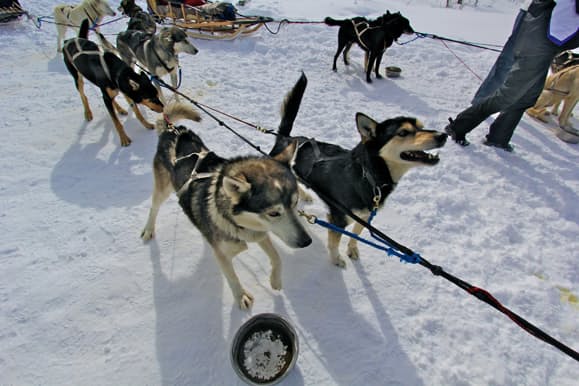 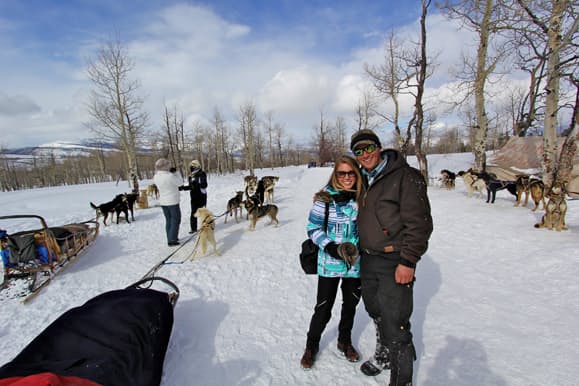 < Make Us Miniature
Provisions: To Your Good Health >