ull to a stop. Pull to a stop. I repeat the mantra in my head as I trace a V through the air with my fly fishing rod — pulling it forward with a casual, efficient flick of the wrist, stopping it to send the energy flying into the line. The tiny puff of yarn on the end of the weighted line goes flying into the lavender bushes off to the side of the lawn where we’re learning to cast. Burke White, our instructor and the manager of Leland Fly Fishing Ranch in Sonoma, cheers approvingly.

Huh. So this is fly fishing? Sign me up. 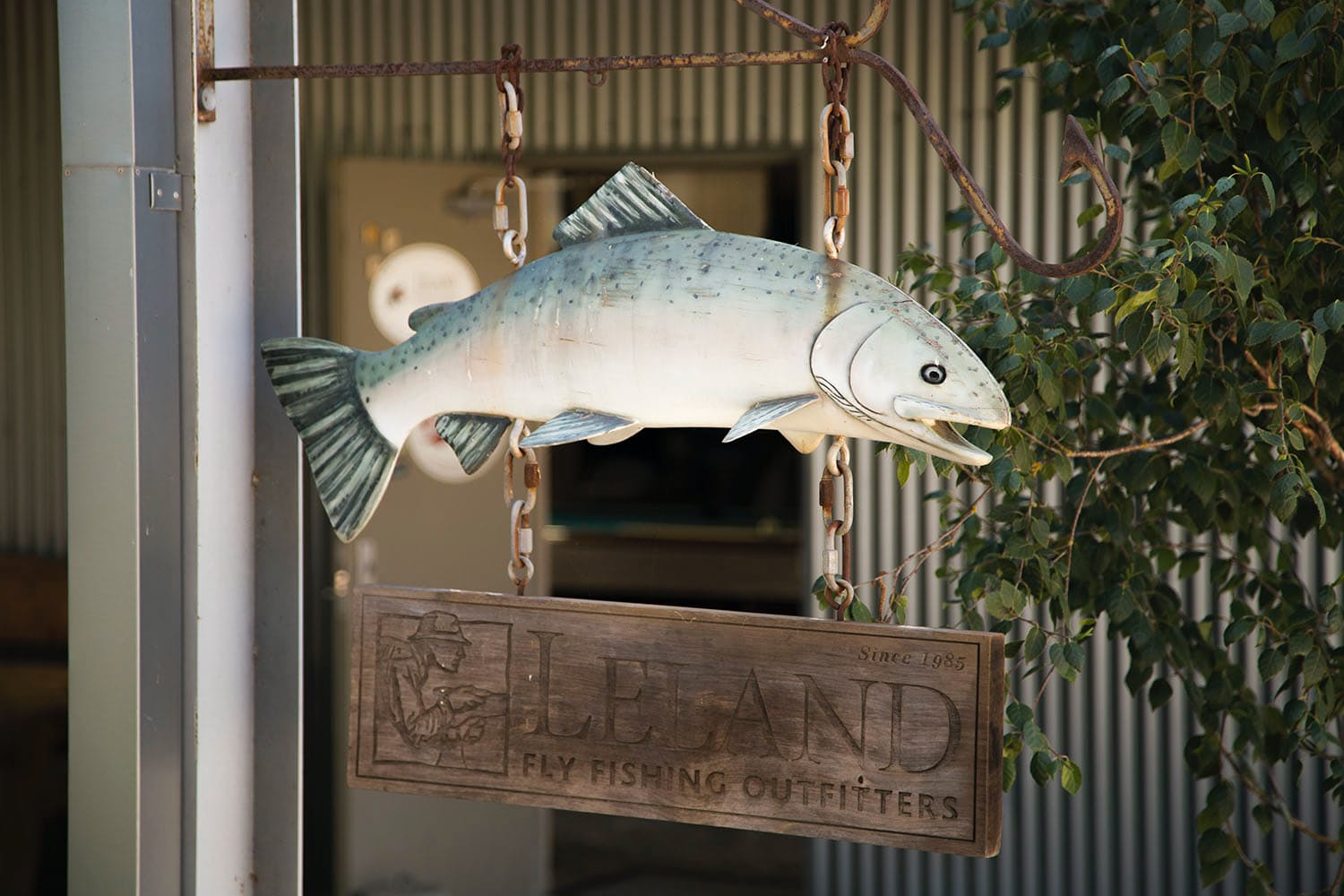 We’re a mere hour north of San Francisco, but the typical fog has completely given way to blue skies and summertime temperatures. Standing on the lawn at Leland Fly Fishing Ranch, baking in the sun and casting a rod gently back and forth, it sure beats a day in the office.

And that’s why we’ve come here. It’s why most people come to Leland, really — to learn how to fly fish. And who’s going to teach them? Burke White, a man whose job is part manager, part teacher, part salesman, and, really, part ambassador. 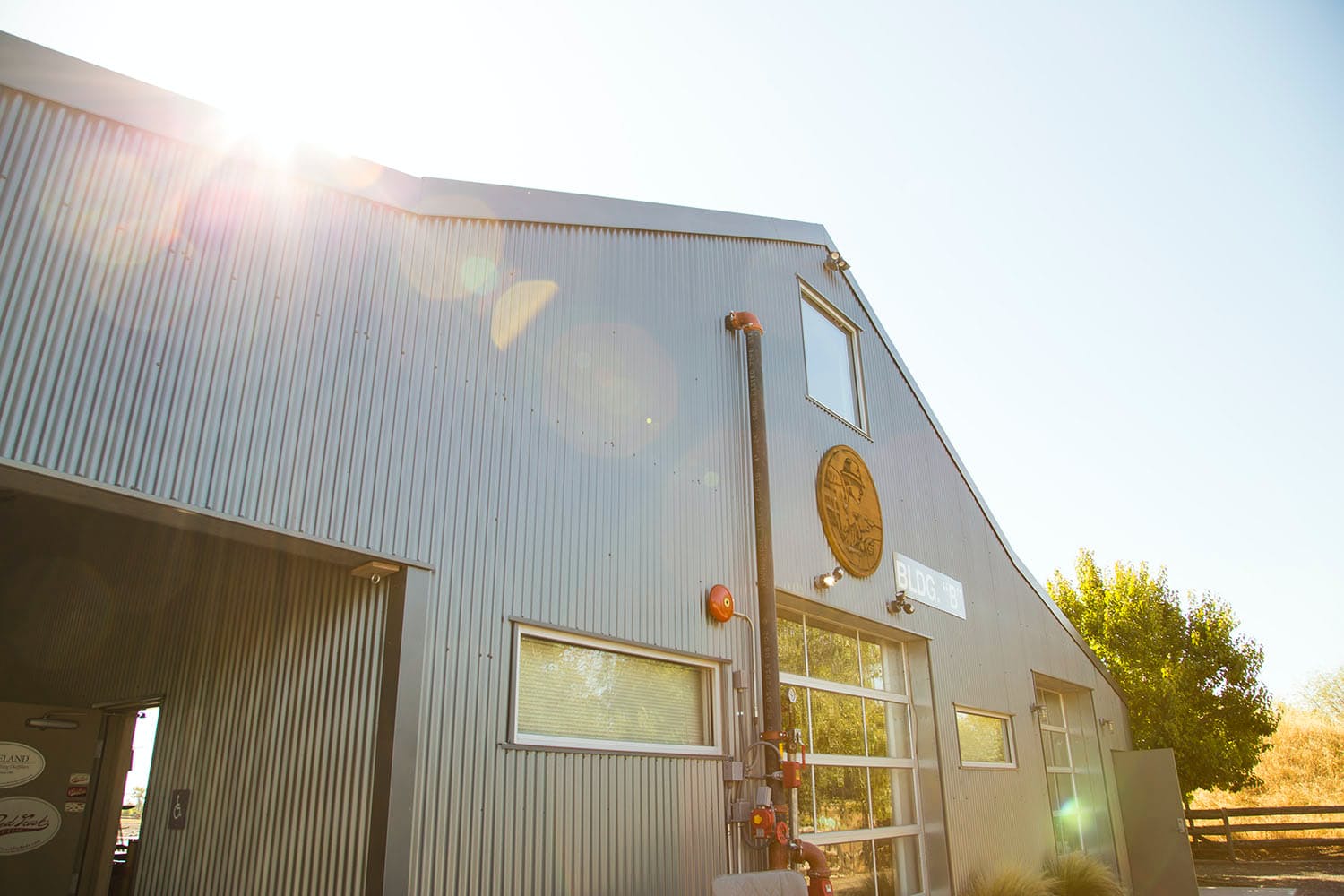 “I end up at these corporate dinner parties — my wife is in the corporate world — and I’m the weird guy in the fly fishing industry,” Burke tells us. “And when I say fly fishing, everyone stops talking about accounts, and the majority of people — I’d say a solid eight out of 10 — look at me and say, ‘I’ve always wanted to fly fish.’”

Burke hears two things when people say this to him: first off, people know what fly fishing is; as secondly, that people have always wanted to, which means they haven’t yet.

“Okay,” says Burke. “If the majority of people want to fly fish but haven’t yet, my question is, why not? ‘Horribly complicated,’ they tell me. ‘Extremely expensive. Super snooty and elitist.’ What we’ve got here is an image problem in the industry of fly fishing, because really, anyone can do it.” 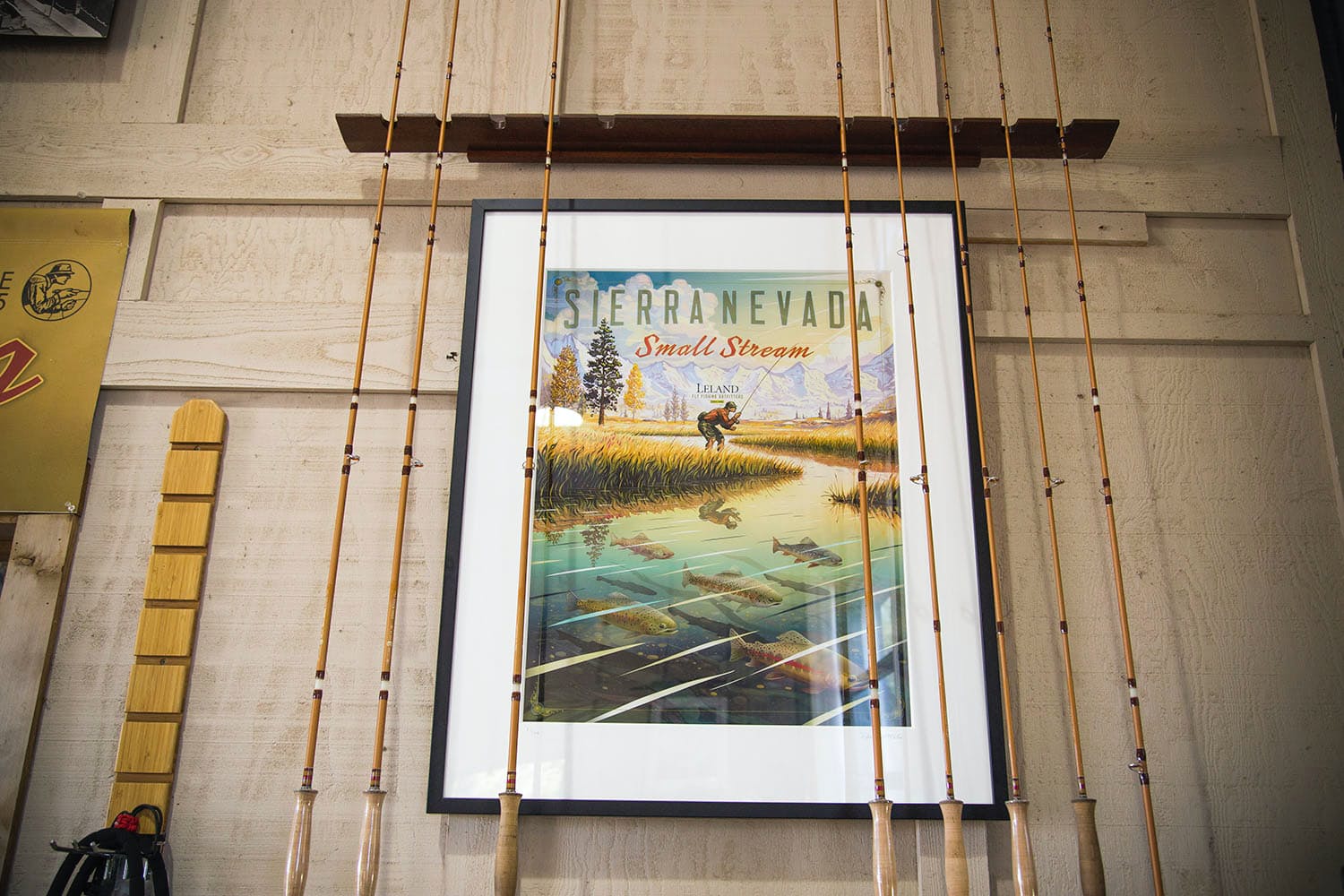 Which is how Leland Fly Fishing came to be. The company was founded in 1985, spent its early years in San Francisco, and moved up to Sonoma eight years ago, where they bought some land along the only road leading from Sonoma to Napa. Today, the property is home to a high-ceilinged, light-filled barn — that’s where the fly shop and Leland office are, not to mention a pool table and some incredibly comfortable leather chairs — a pond filled with trout the size of the Leland cat, Coho, and a creek making a circle from the pond and around the buildings.

“When we bought this property for Leland,” says Burke, “we wanted to make a beautiful place where people could come to: step one, chill out and relax; and step two, be very responsibly introduced to the sport of fly fishing. And that’s what I’m going to do with you guys.” 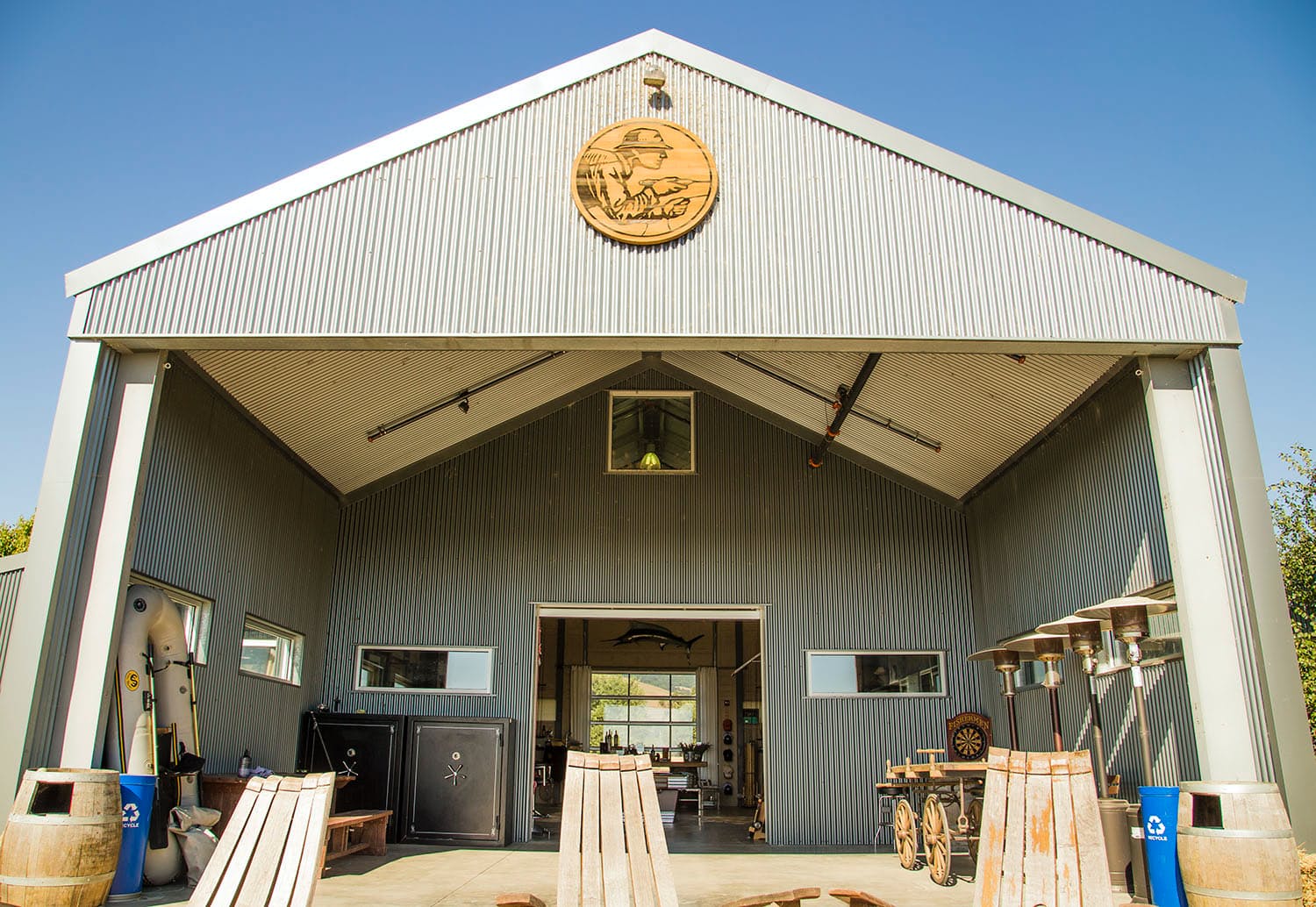 According to Burke, one of the main problems within the fly fishing industry is that many consider the activity a “sport.” What is it, instead? It’s an “outdoor activity.”

“If we remove two words from our industry — technology and performance — then everyone enjoys it,” says Burke. “People call fly fishing a ‘sport,’ and that’s where technology and performance come in. Baseball is a sport. Formula 1 racing is a sport. So I’m at a point where I say fly fishing isn’t a sport, because if you remove that part of it, then it’s just a really awesome outdoor activity. Sweet — I can do that! You only need a bit of knowledge and gear to be able to participate. That’s not much. And when people hear that, that’s when they say, ‘I’m in.’” 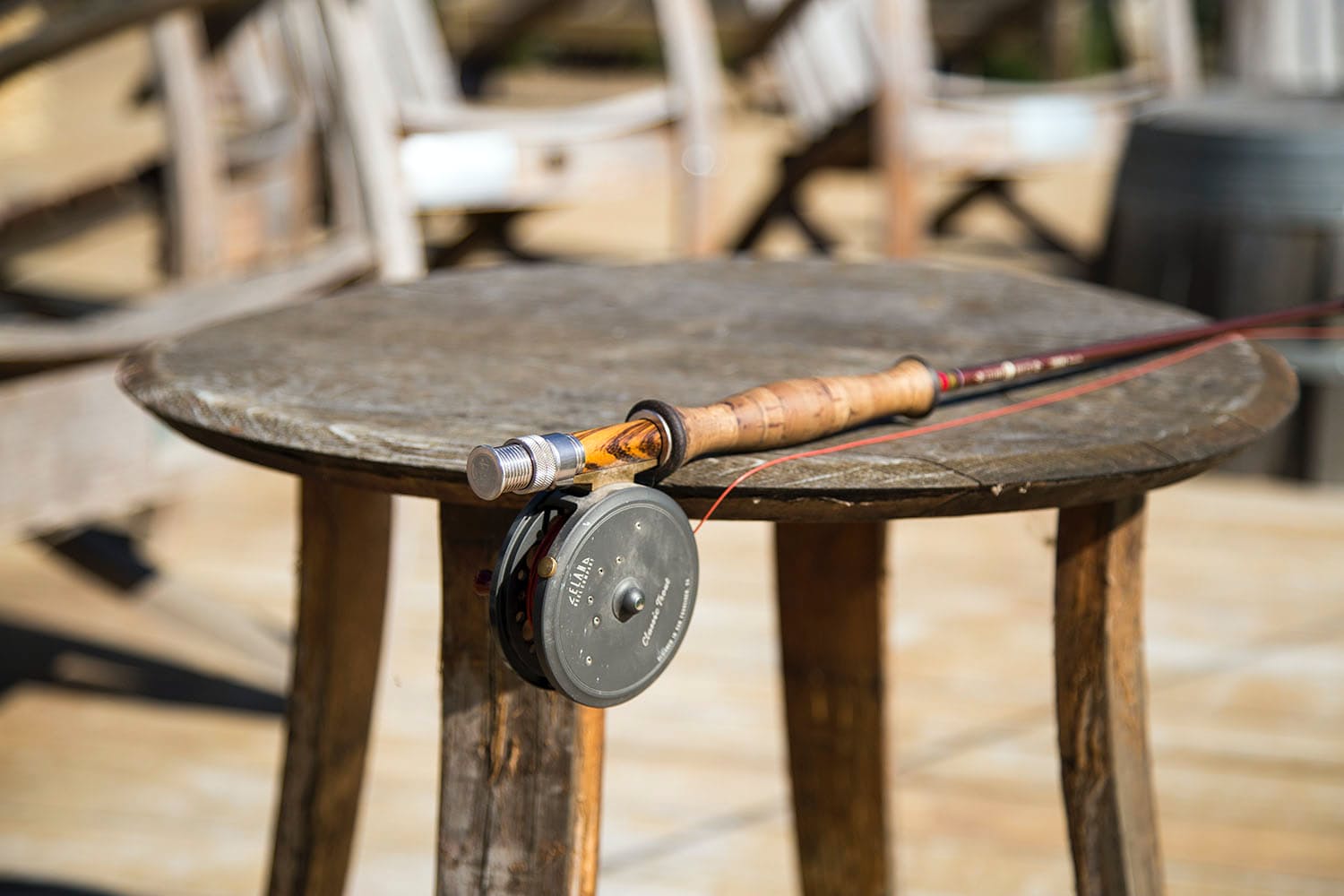 At Leland, they’re not carrying a ton of the big-name, money-making fly fishing brands anymore. “It’s not because those brands aren’t good people; they are. And it’s not because they don’t make good product; they do,” says Burke. “But we’re about education. About making it more accessible to beginners, and helping people who’re already experience to make their casts more simple and more efficient. So we only carry the gear that’s necessary for that. We’re keeping it simple.”

Because fly fishing is really very simple. Fish don’t have hands, Burke repeats to us. They put things in their mouths. So a fly angler’s job is is to put a fake bug somewhere near them and nature takes care of the rest. He’s not a believer in the whole River Runs Through It, hours of false casting, you-gotta-learn-to-double-haul-cast style of fly fishing. If you can’t hold a rod in one hand and a beer in the other, Burke says, it’s not simple enough. 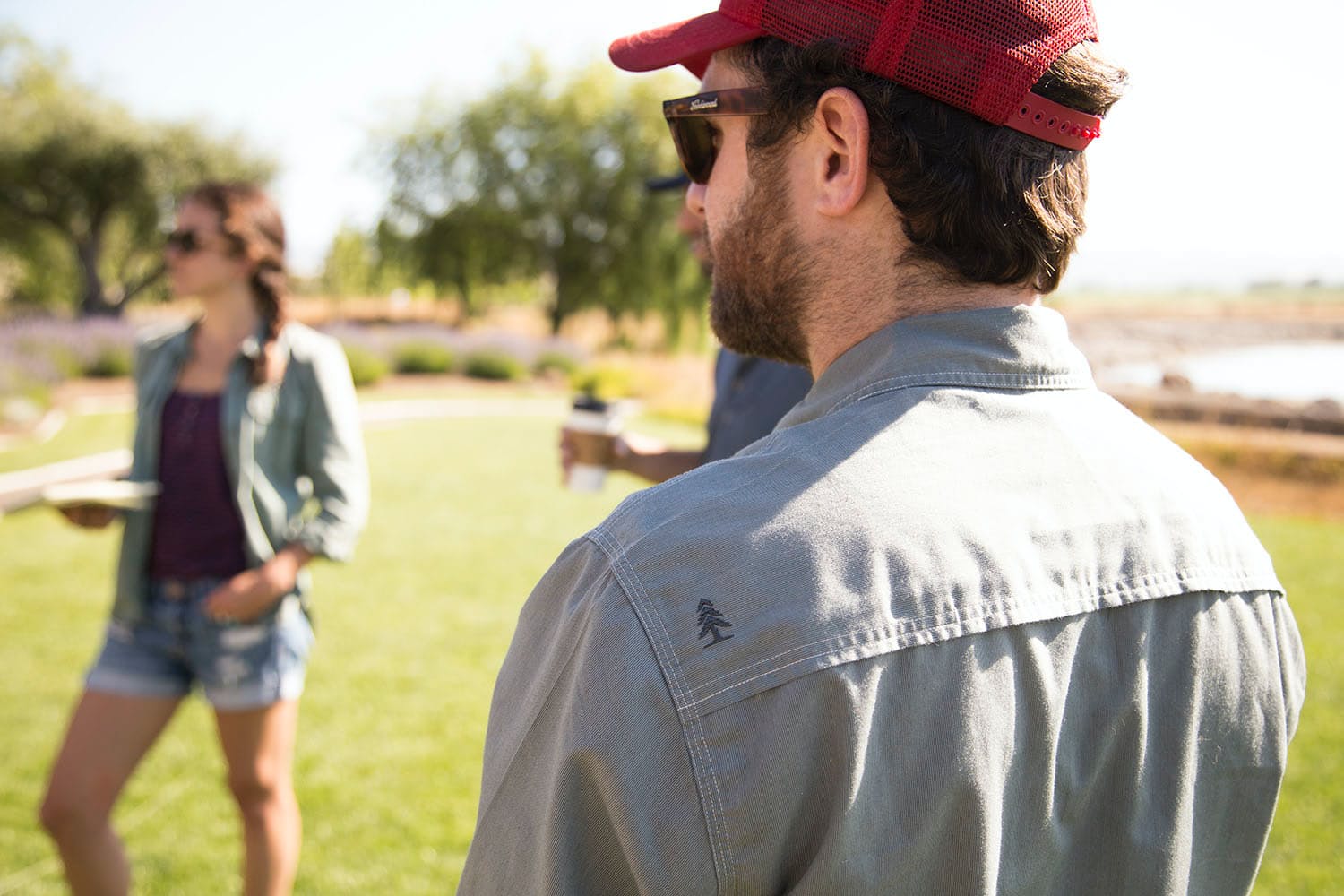 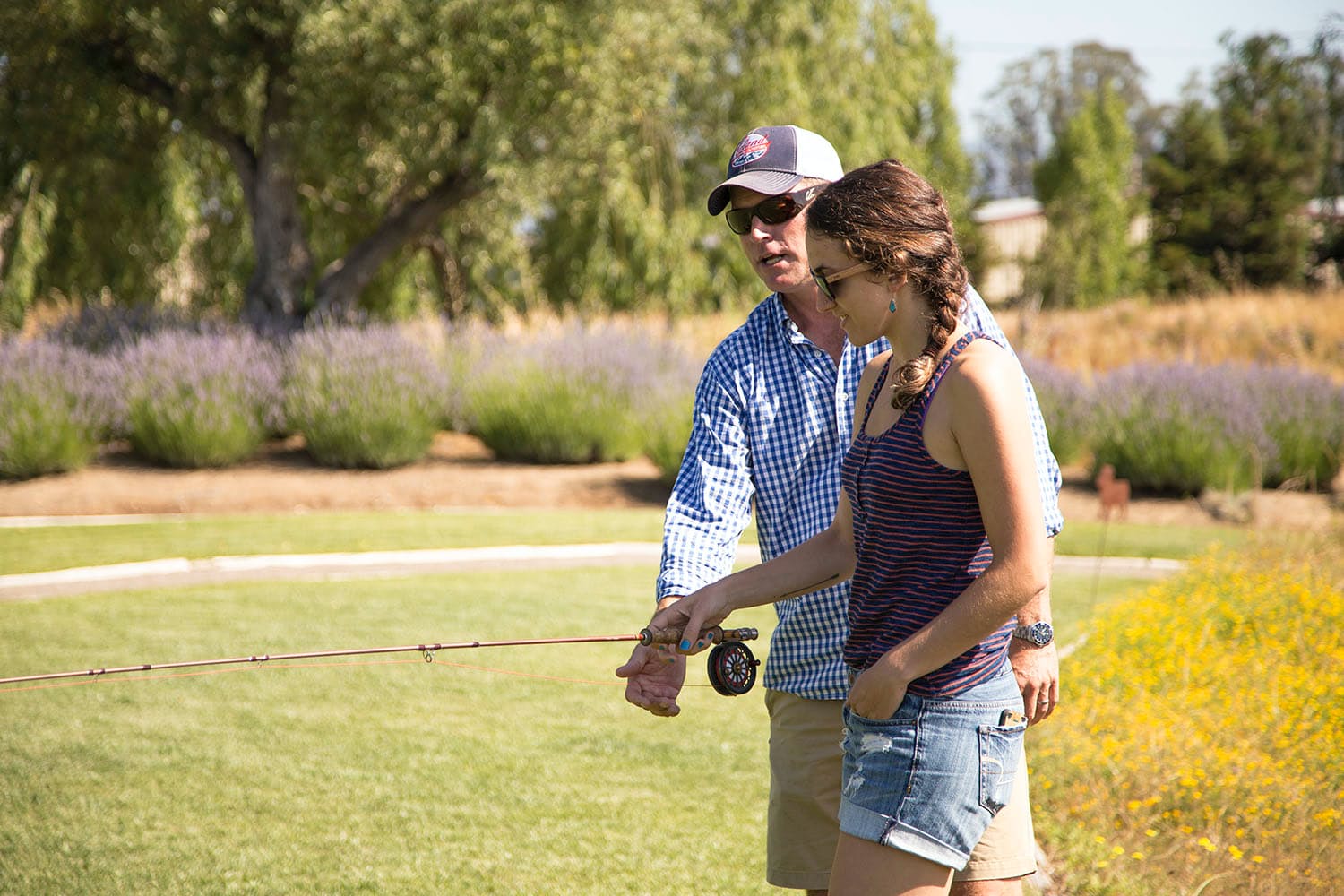 After just five minutes at Leland, it’s immediately clear that Burke has got this whole teaching thing down. We grab a few Sonoma rods — the perfect beginner’s rod for anyone looking to catch a few trout — and head out onto the lawn behind the barn. From his days working as a guide, Burke knows it’s not a good idea to teach people how to fish when they could be distracted by fish jumping in the water; teach them on a lawn, though, and you can really perfect your cast.

The sun glints off the pond, and every once in a while we do see fish gulping at the surface of the water. Coho the cat walks at our feet and occasionally get up the energy to chase the small tuft of yarn tied to the line that we take turns casting back and forth, Burke giving us small pointers and tips as we go. 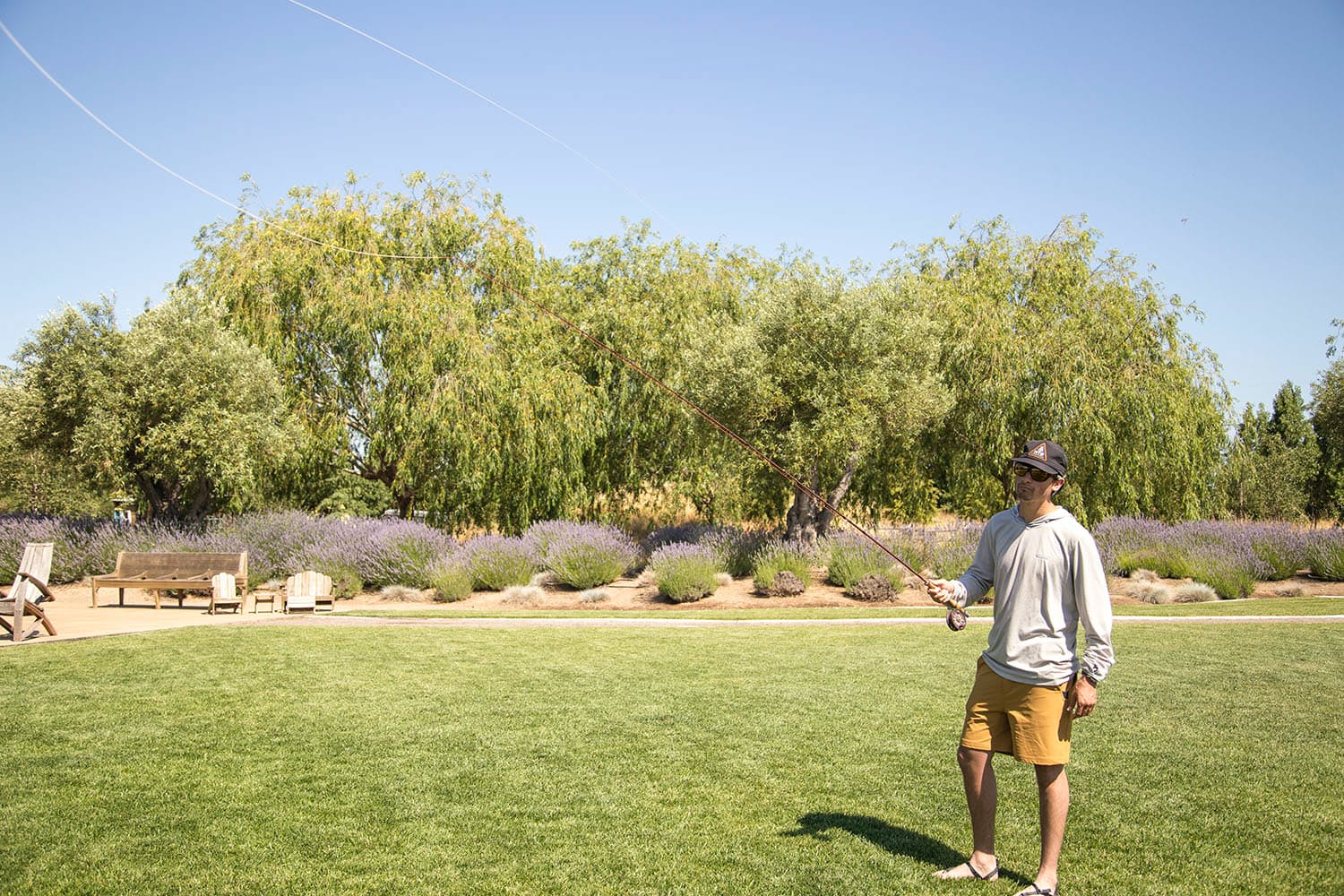 Burke’s been told many times that he should write a book about how to fly fish. “The problem is,” he says, “who would pay $20 for a book that’s just three pages long?” Because that’s how simple Burke’s methodology is. (In fact, he could probably squeeze it all into two pages.)

Principle number one: take the slack out of the line. Principle two: like with a bow and arrow, use the rod to amplify the potential energy and pull the line. Principle three: stop the rod to transfer the energy into the line and send it flying. Voila — fly fishing. It really is as simple as Burke says it is. Pretty soon, we’re all sending lines zipping around. We all clap for each other. Coho meows. 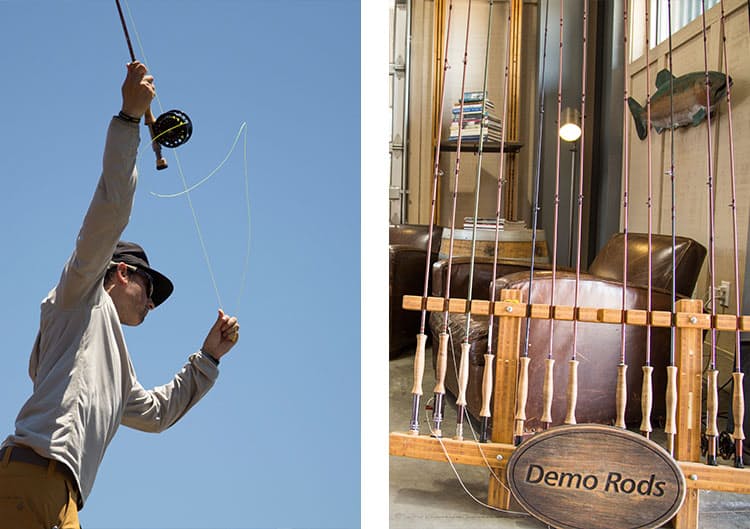 “Once you get this down, the fun really begins,” says Burke. “You can put the line wherever you want. And if I can get you to smile standing on a lawn pulling a plastic string? Well, it gets a hell of a lot more fun when you actually go fishing.”

So it only makes sense that we do. We hop into a couple cars and drive ten minutes to park on the road alongside a field; we walk ten minutes through tall brush and pretty soon, after a quick tick check, we’re using the more advanced Leland Coast rod to cast lines into a marsh. The water is calm. We don’t hear any traffic, no other people; the only sound is that of the fly line, whooshing back and forth over our heads. 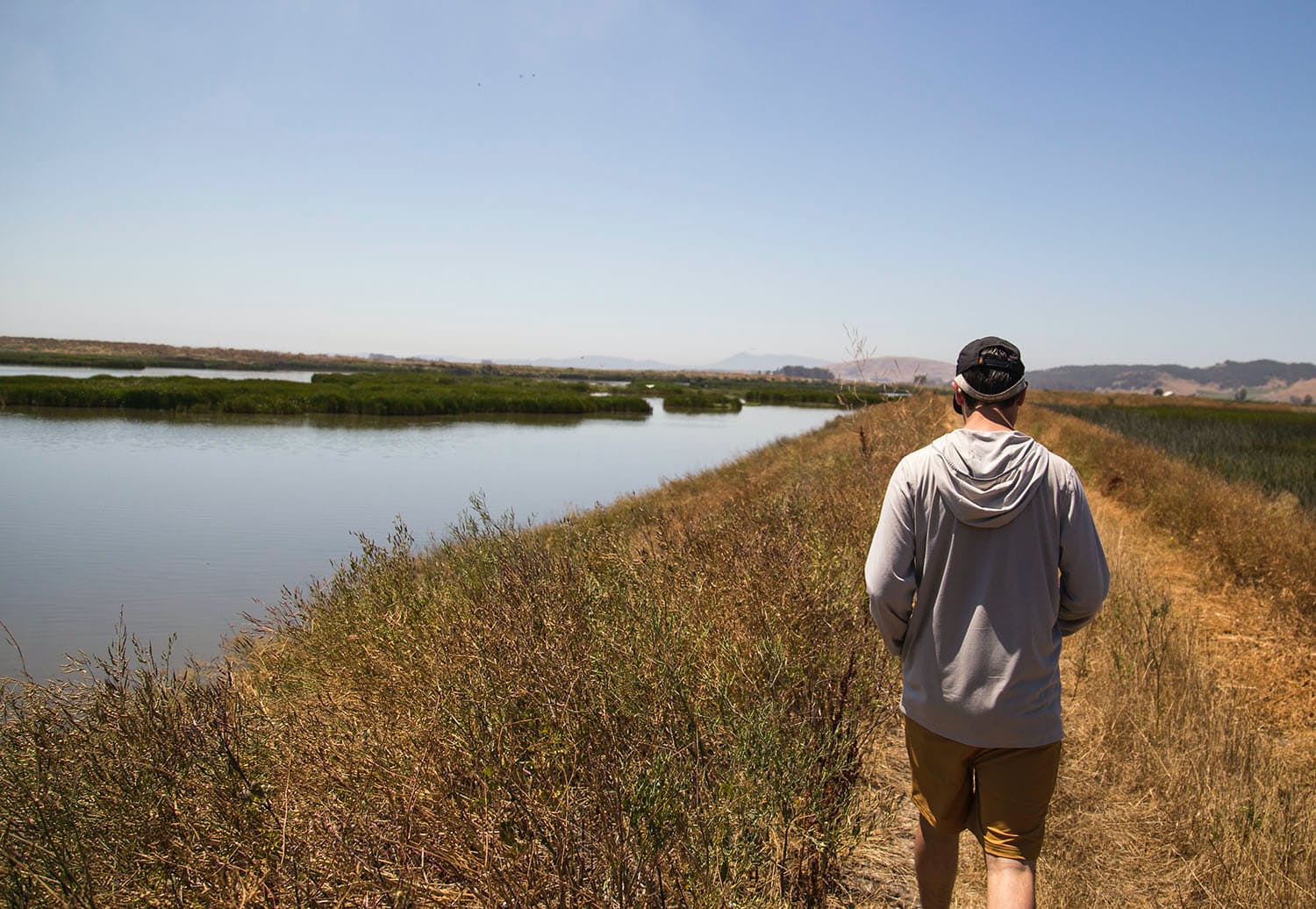 The fish aren’t biting, but we do pick up a pile of turkey jerky and some sandwiches on the drive back to Leland. Eating a late lunch, sun-tired but happy, it dawns on me that Burke is right. Fly fishing really is a damn fine outdoor activity. [H]

Looking for a new rod? You're in luck — we're carrying three premium Leland rod packages  — not to mention a few rad accessories — here. 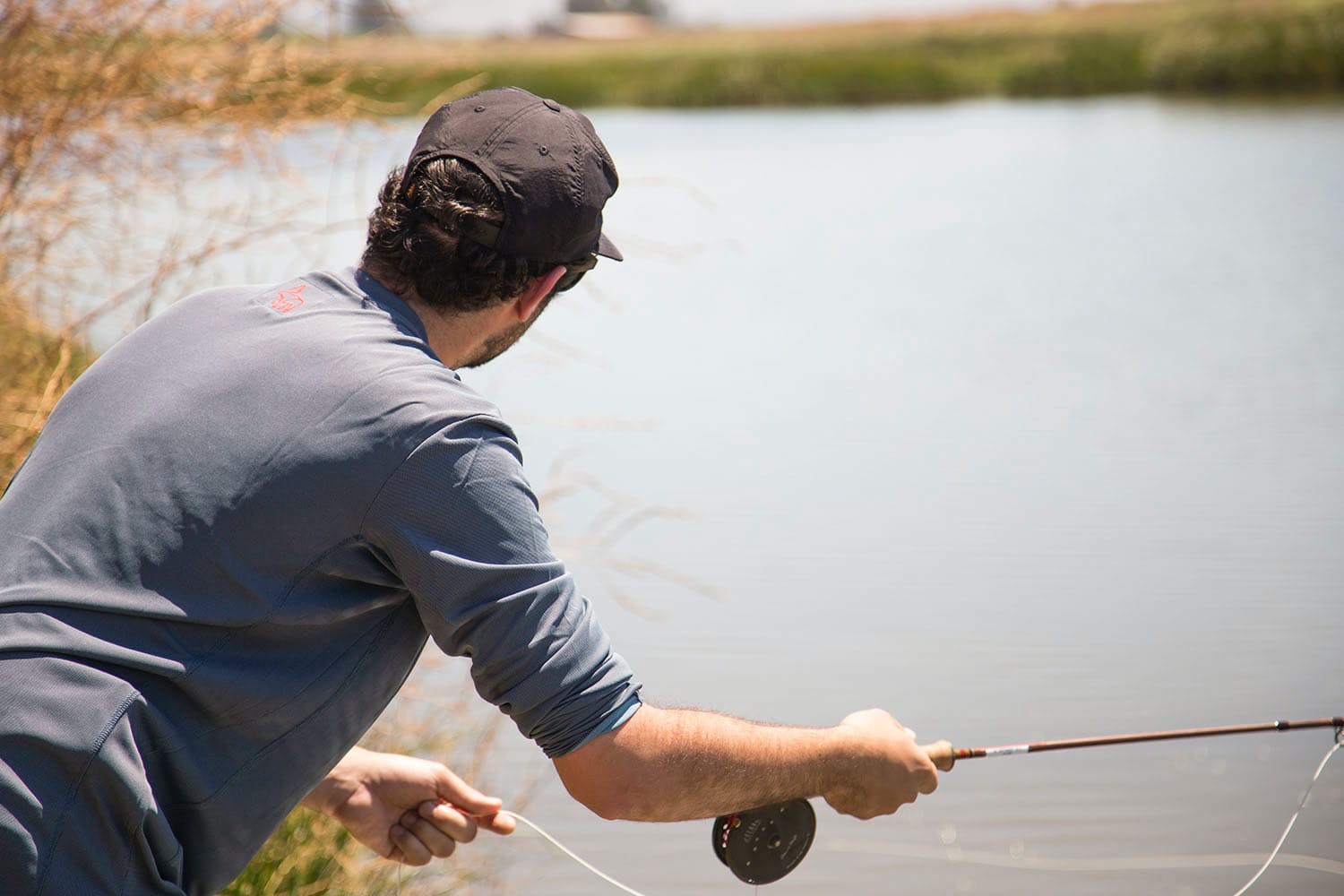 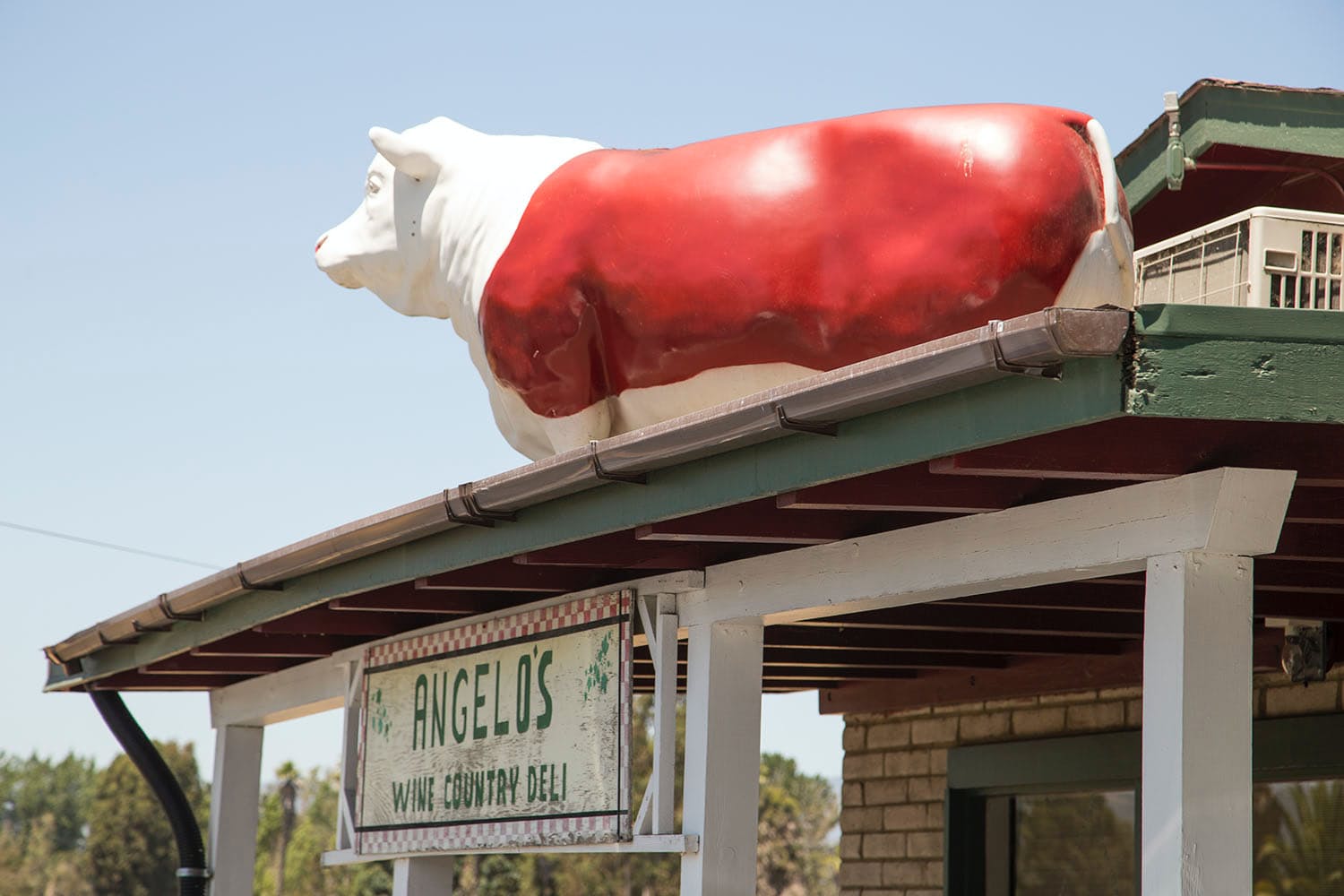 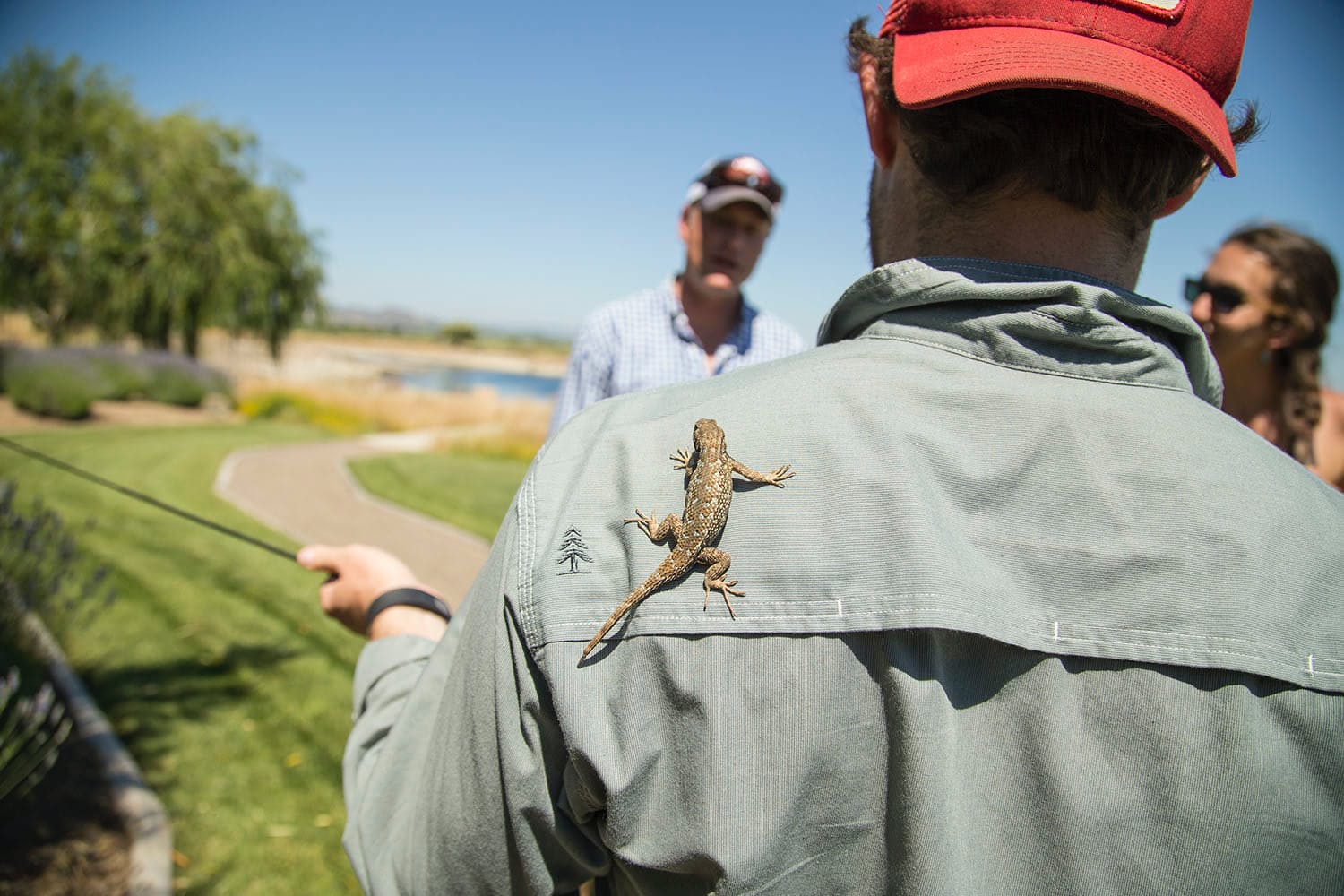 Liv Combe's great-grandfather taught her to fish when she was a kid. Her favorite part was eating pancakes.
She's the Associate Editor at Huckberry in San Francisco.
Follow her on Twitter and Instagram.